Last summer my sister Barb and I
hit the road together in Nova Scotia.

One of our stops was the perfect spot
for we two geologists to scramble
over the Great Nova Scotia Batholith!

Okay.  Okay.
I admit it!
Most people go there to see
what is perhaps the most photographed
lighthouse in the world. 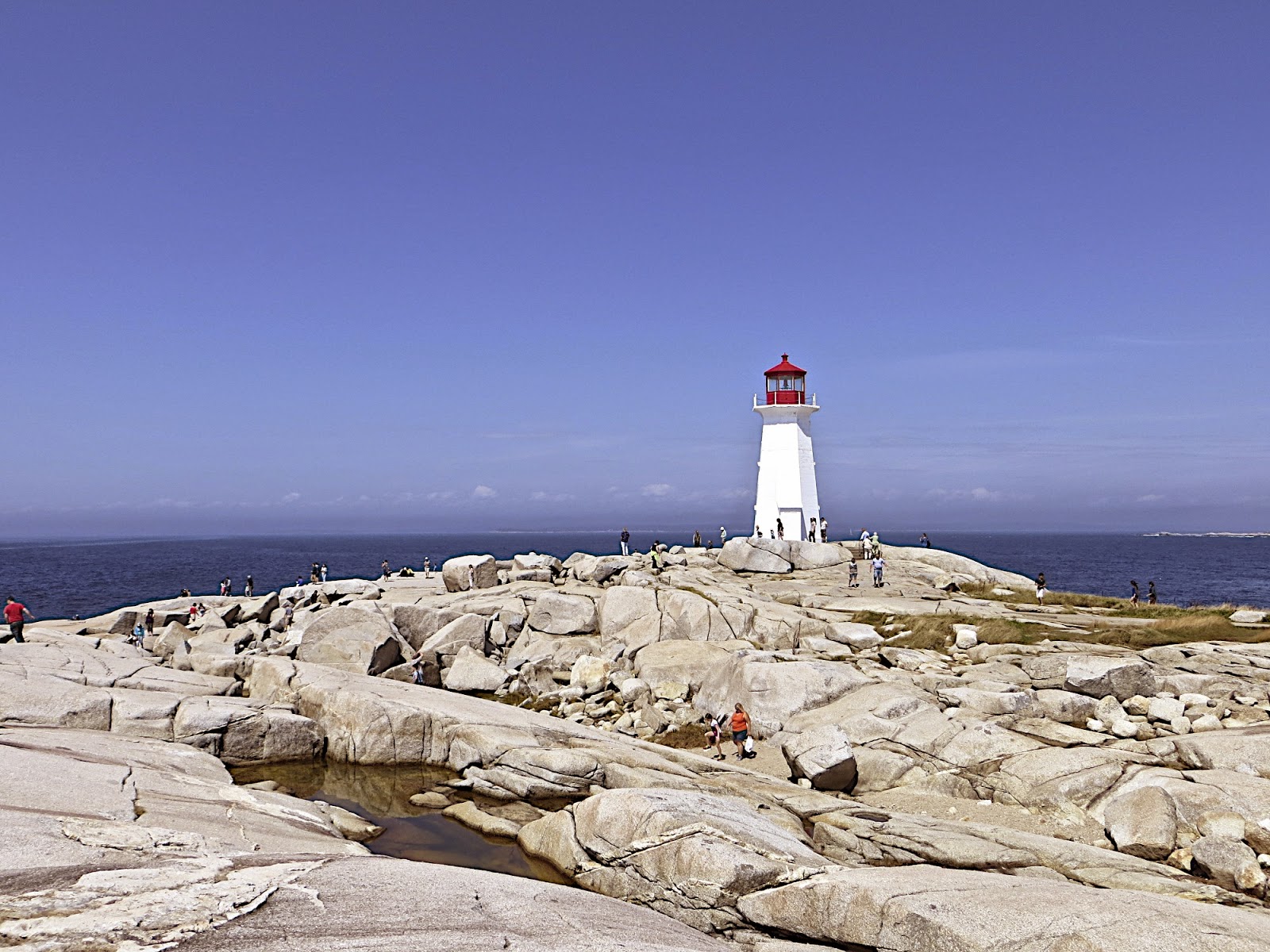 Tourists from all over the world
head southwest out of Halifax
and travel 26 miles or 43 kilometers
to reach the fishing village of Peggys Cove
where the lighthouse was established in 1868.
Source

Peggys Cove is a tiny community
located on the eastern shore of St. Margarets Bay.

Barb and I have been there a number of times,
because we love climbing all over
the gorgeous, coarse-grained,
greyish-white granite exposed
along the southern coast of the province. 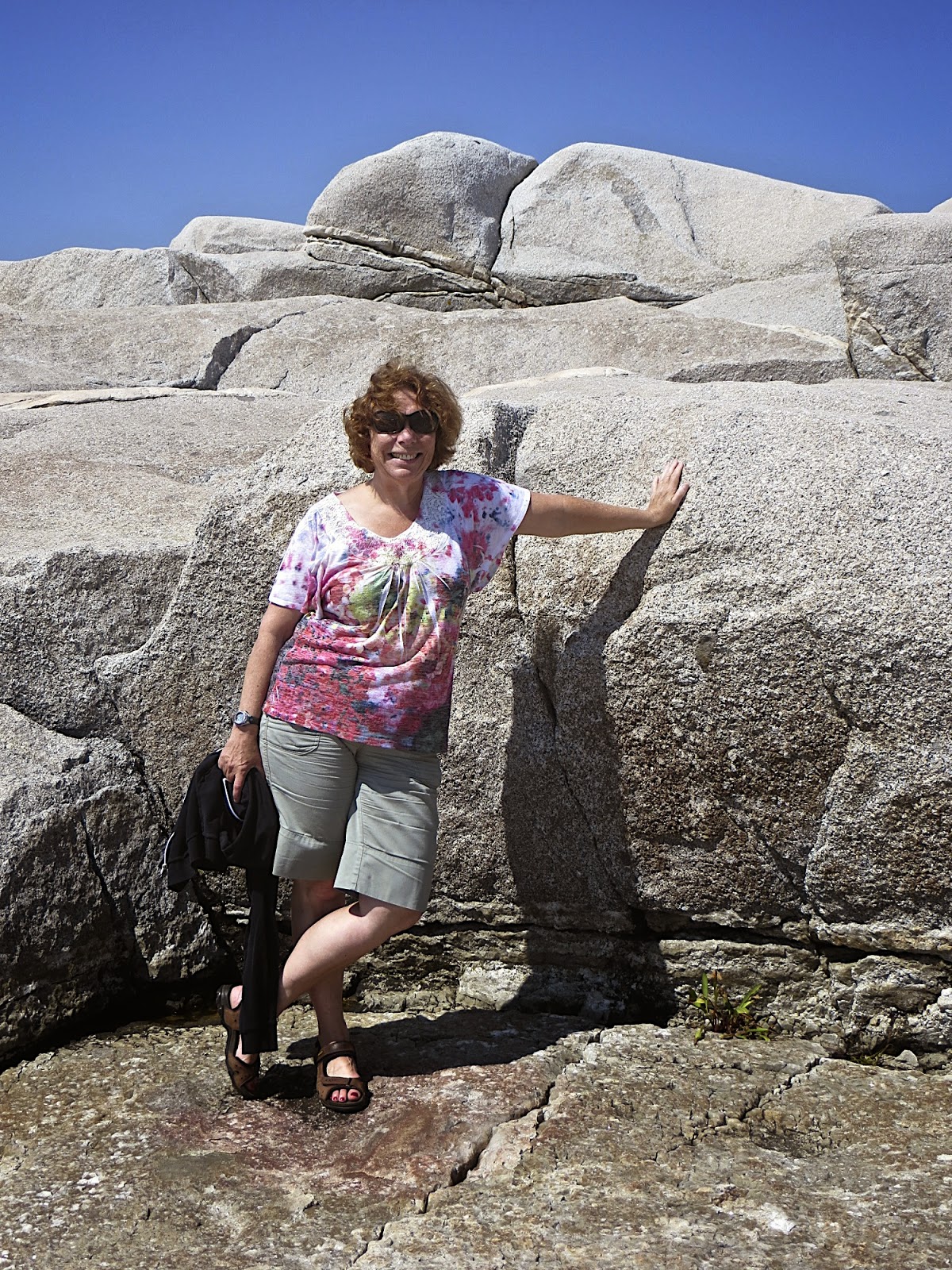 
We're not the only ones who love to do this!
Seriously! 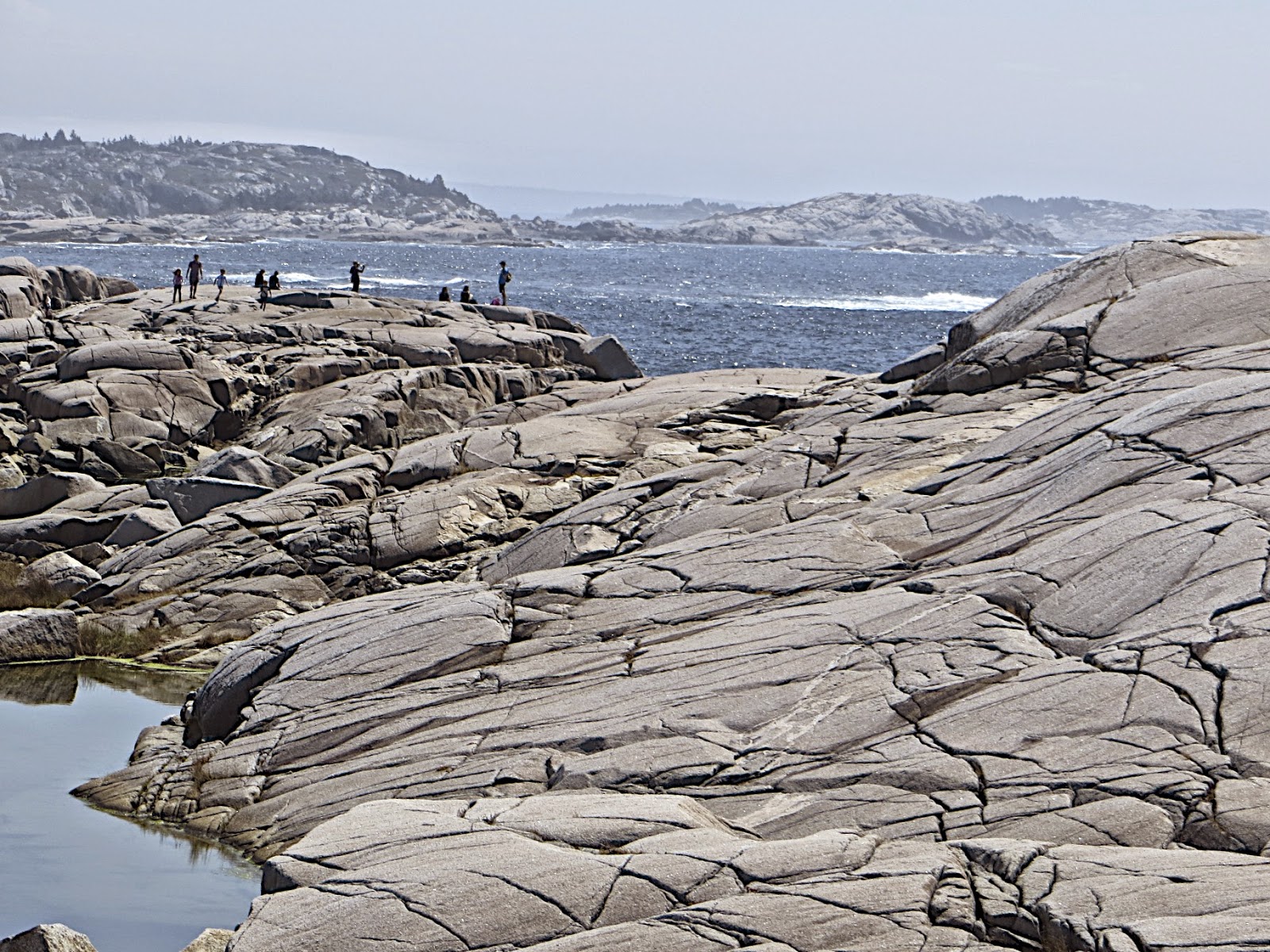 
A word of caution though.
Running around on the rocks is hazardous,
especially if they are wet and slippery. 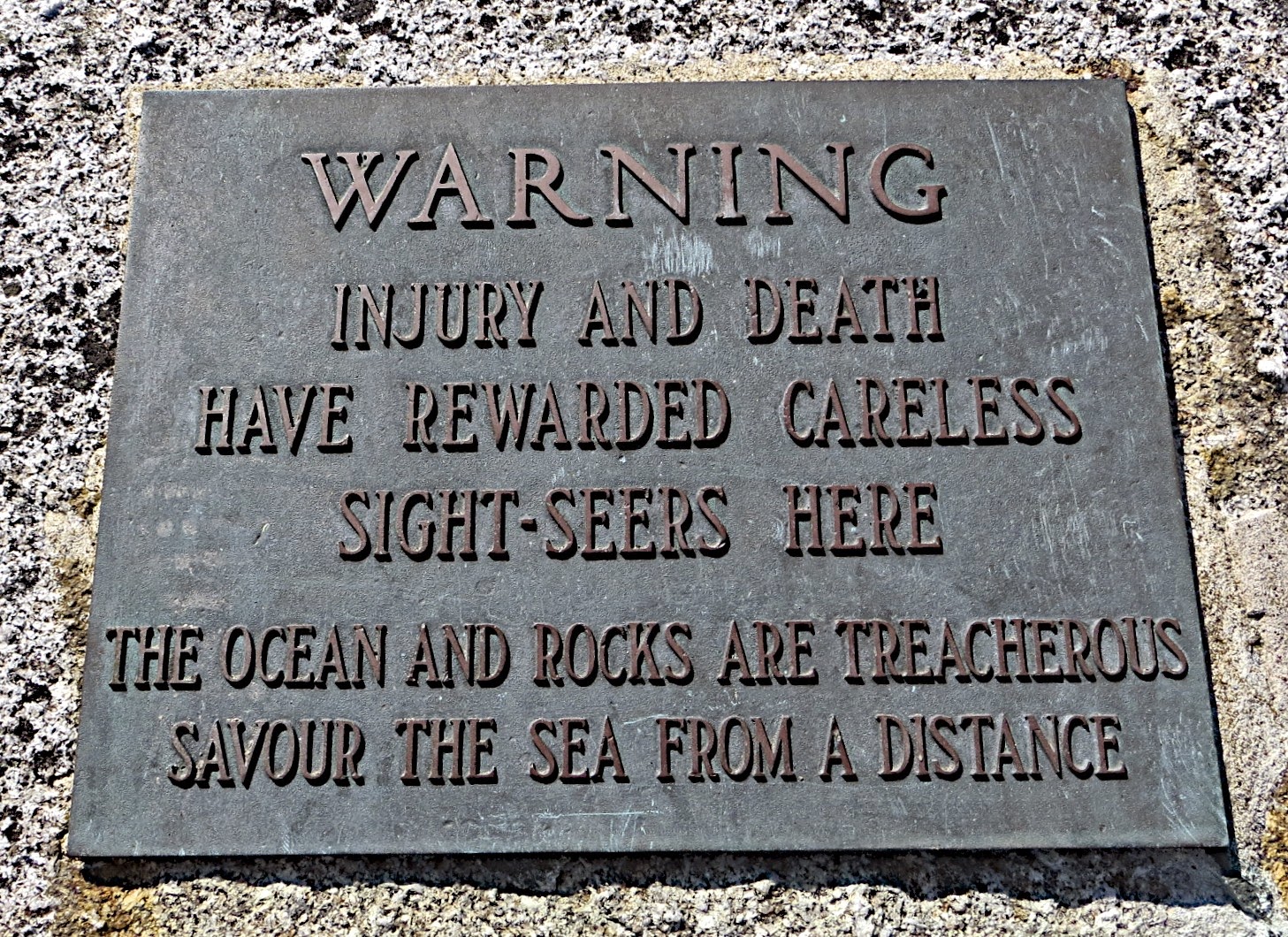 It's never a good idea to turn your back on the ocean,
because unexpected and large waves
can wash you right off those enticing rocks. 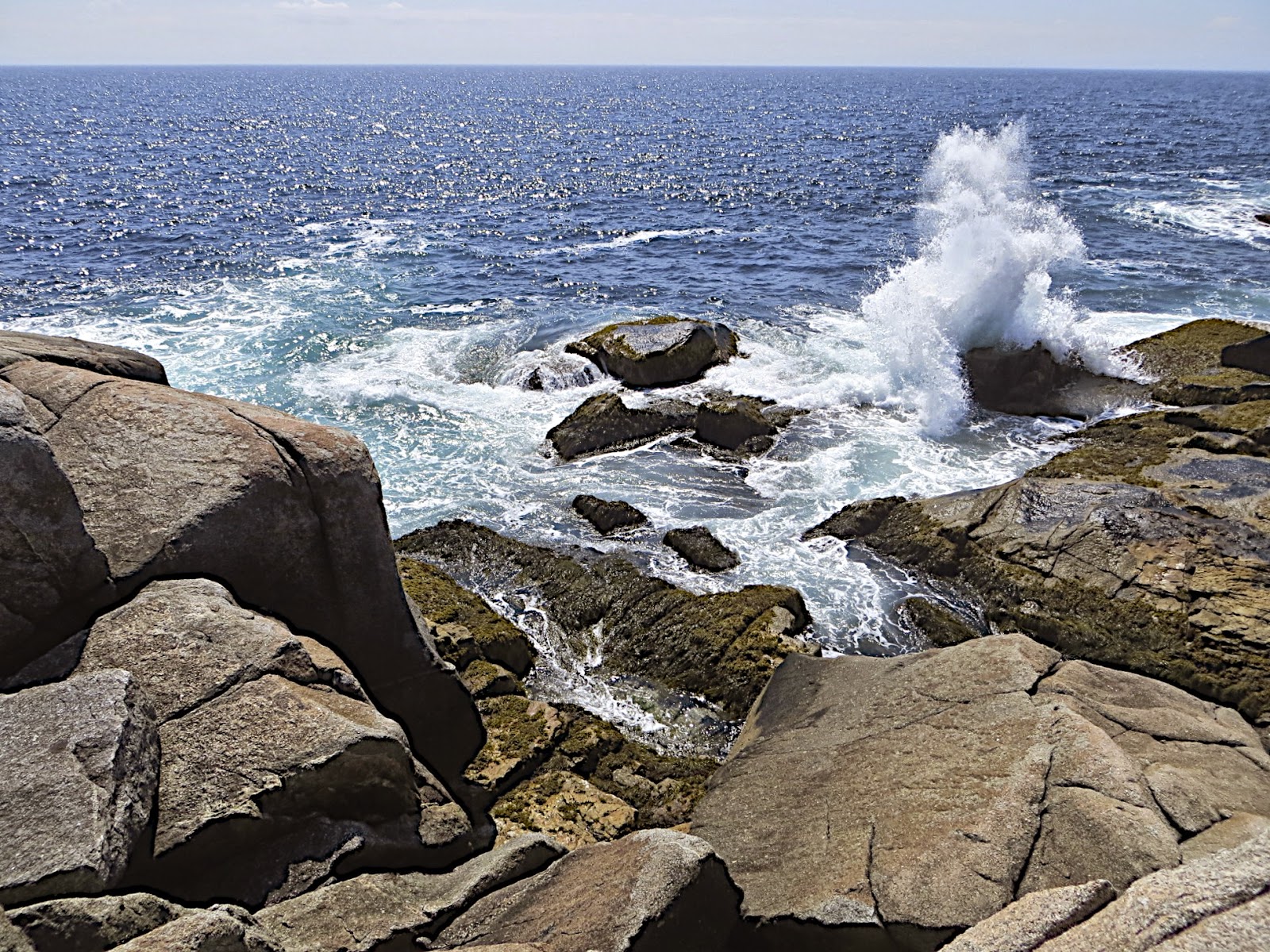 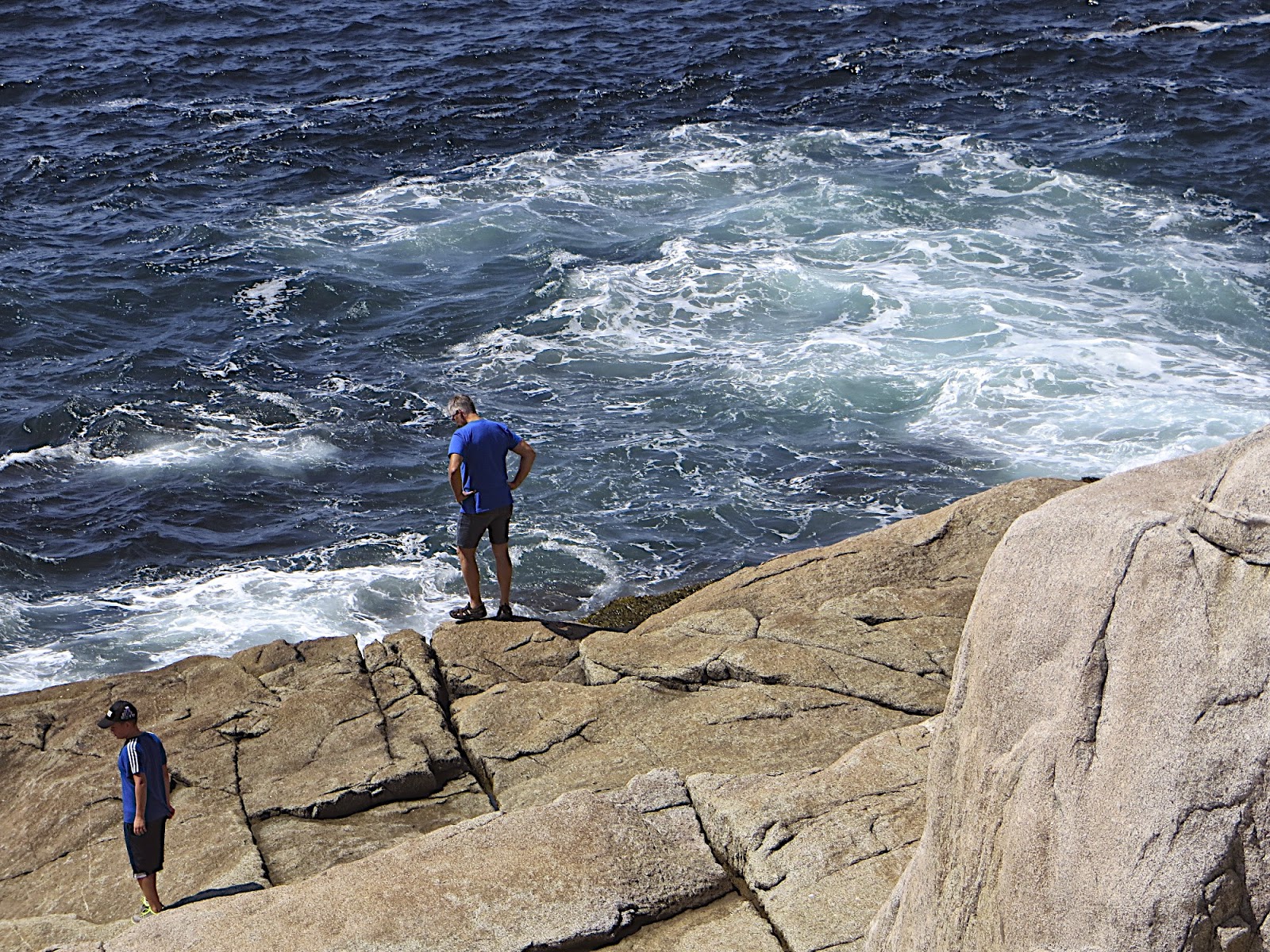 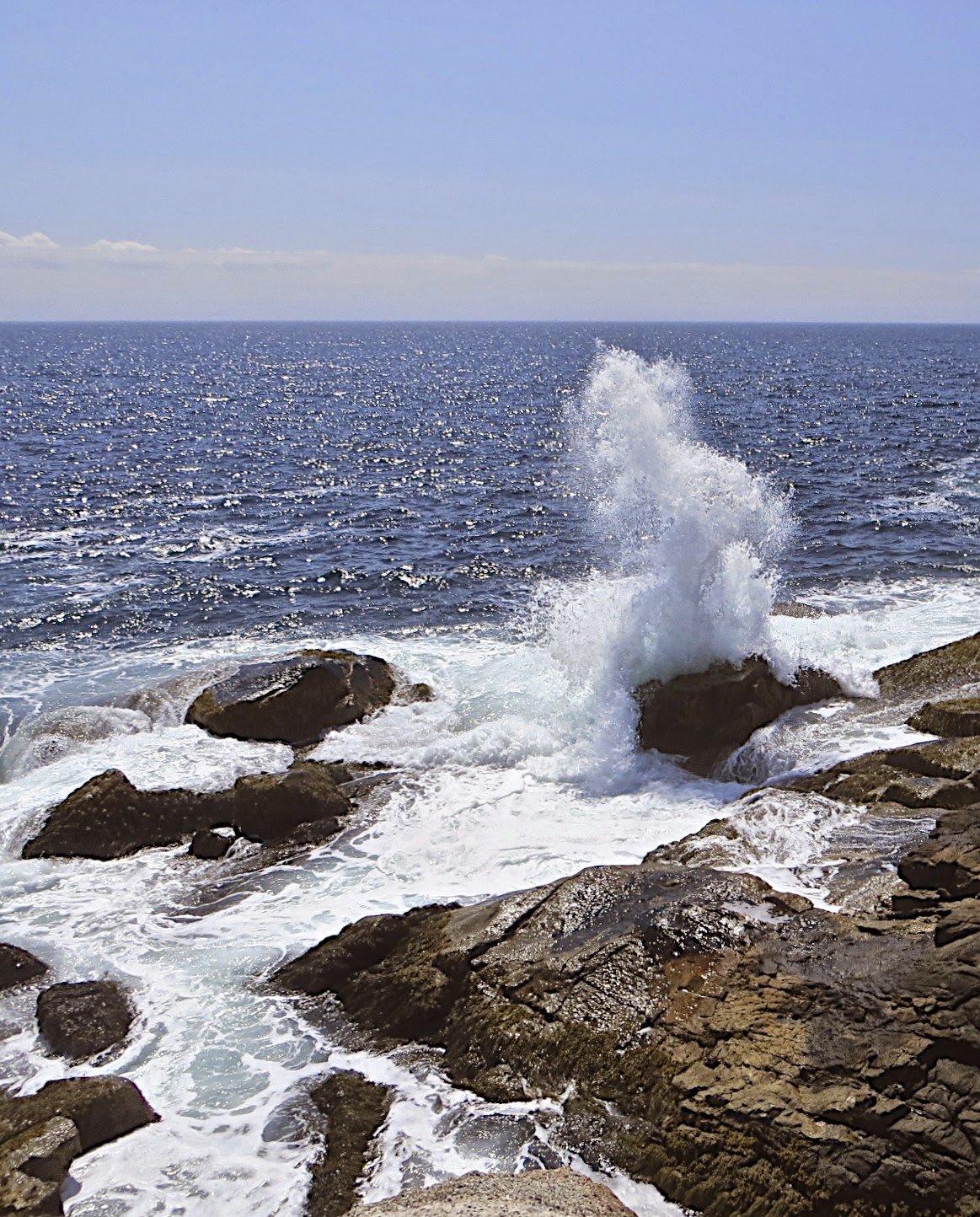 Peggys Cove is most likely named
after St. Margarets Bay
which the famous French explorer
Samuel de Champlain
named after his mother Marguerite
(Peggy is a common nickname for Margaret).
wikimedia 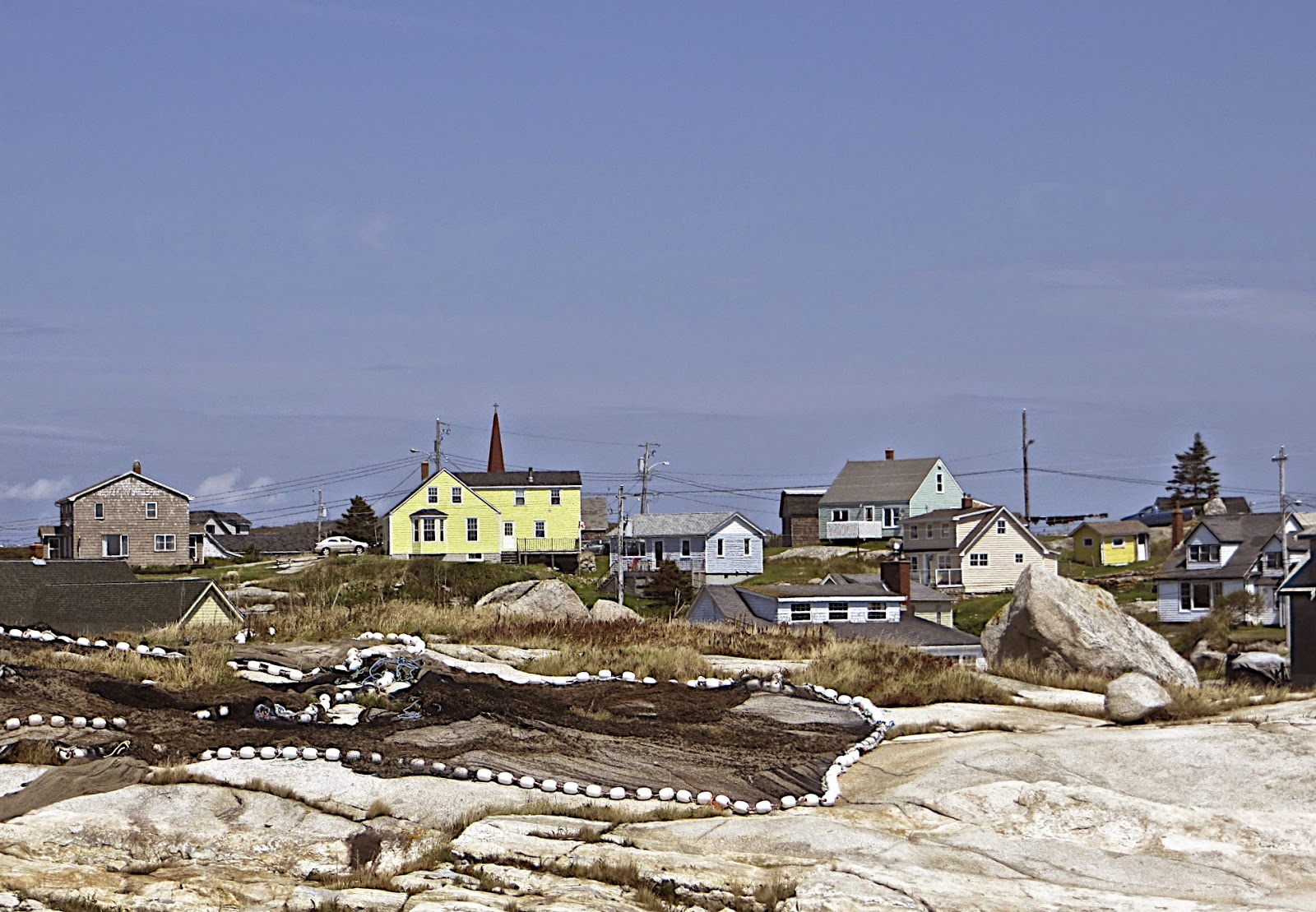 But popular legend attributes the name of the village
to the sole survivor of a shipwreck
at nearby Halibut Rock in the late 1700s.
She married a resident of the cove in 1800
and became known locally as Peggy of the Cove.
Eventually the village became known
as Peggys Cove.
Wikimedia


Scrambling over hot rocks
can work up an appetite and a thirst,
so many tourists stop at a popular restaurant
for a welcome break ~
Lots of tourists,
including tourists on tour buses. 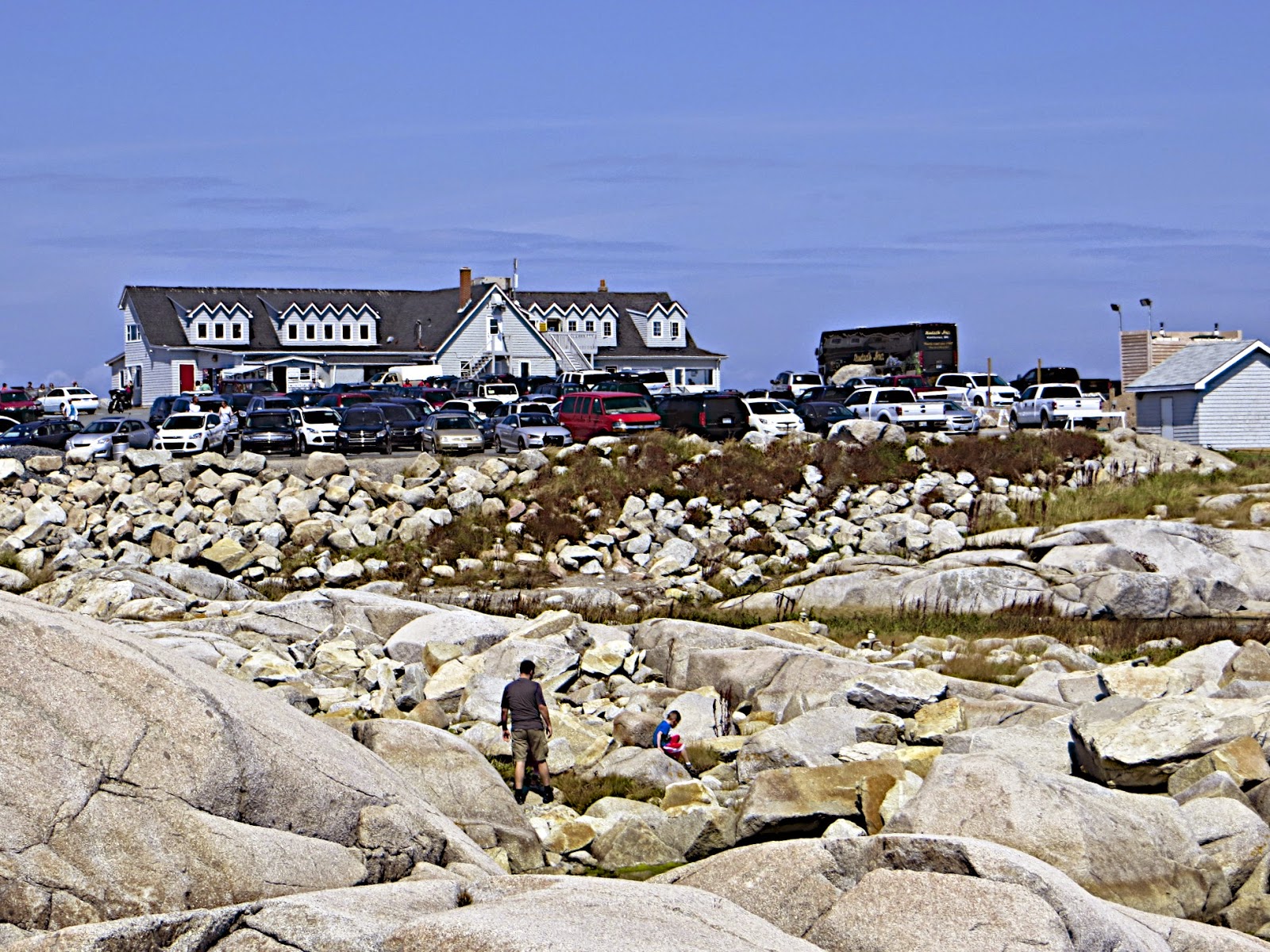 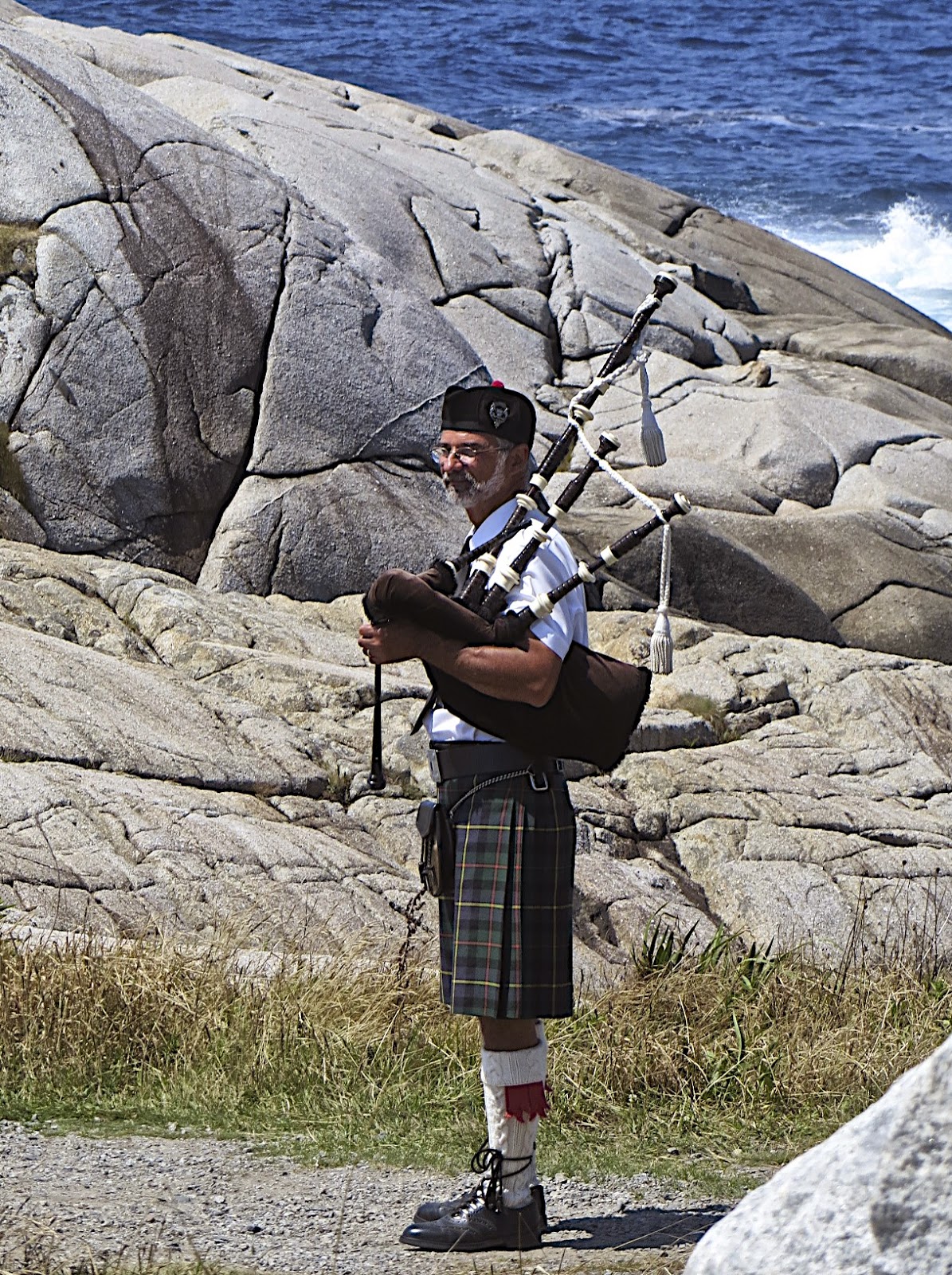 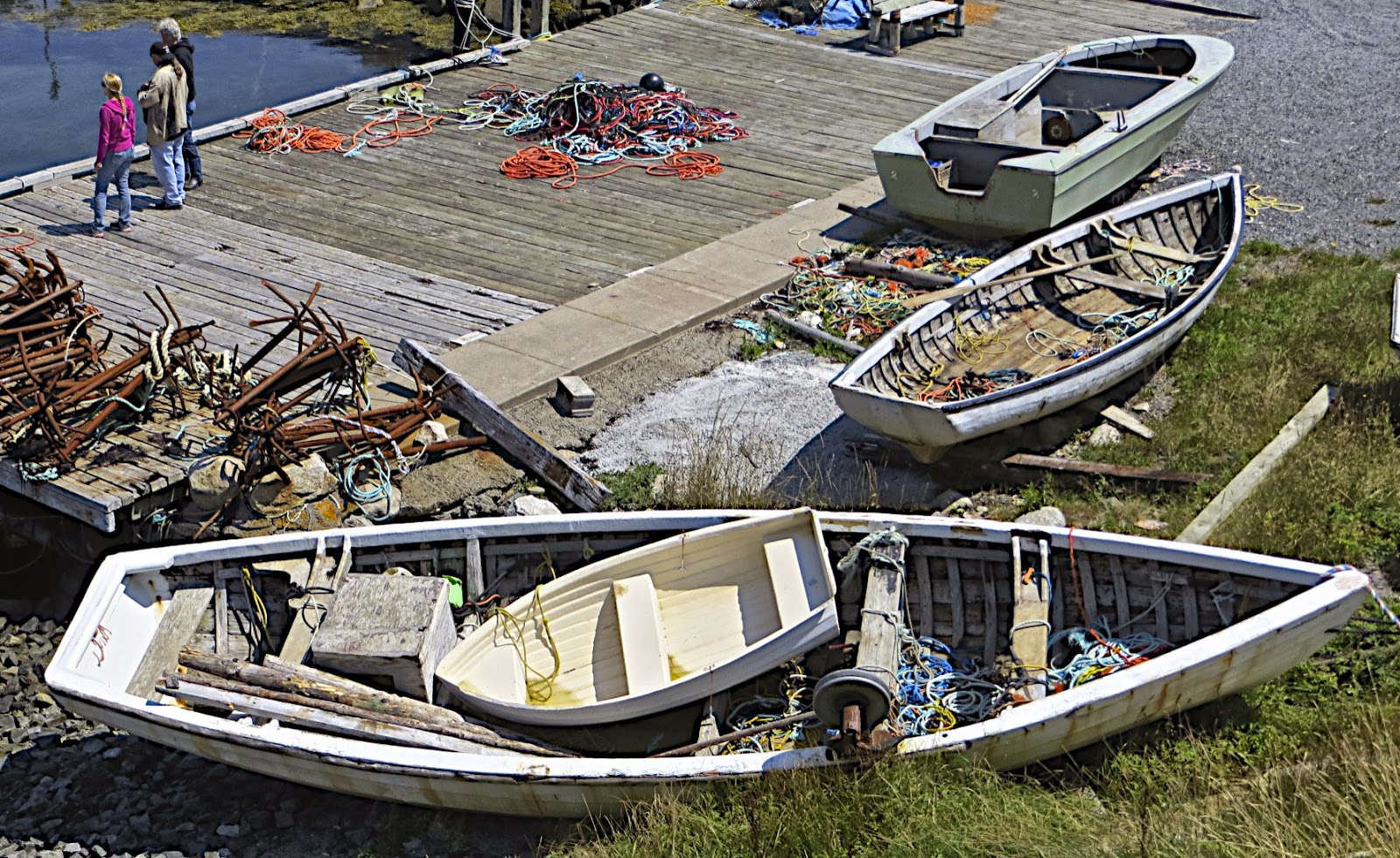 Today tourism is the economic mainstay of the community,
but some residents still fish for lobster
as others did during the past two centuries. 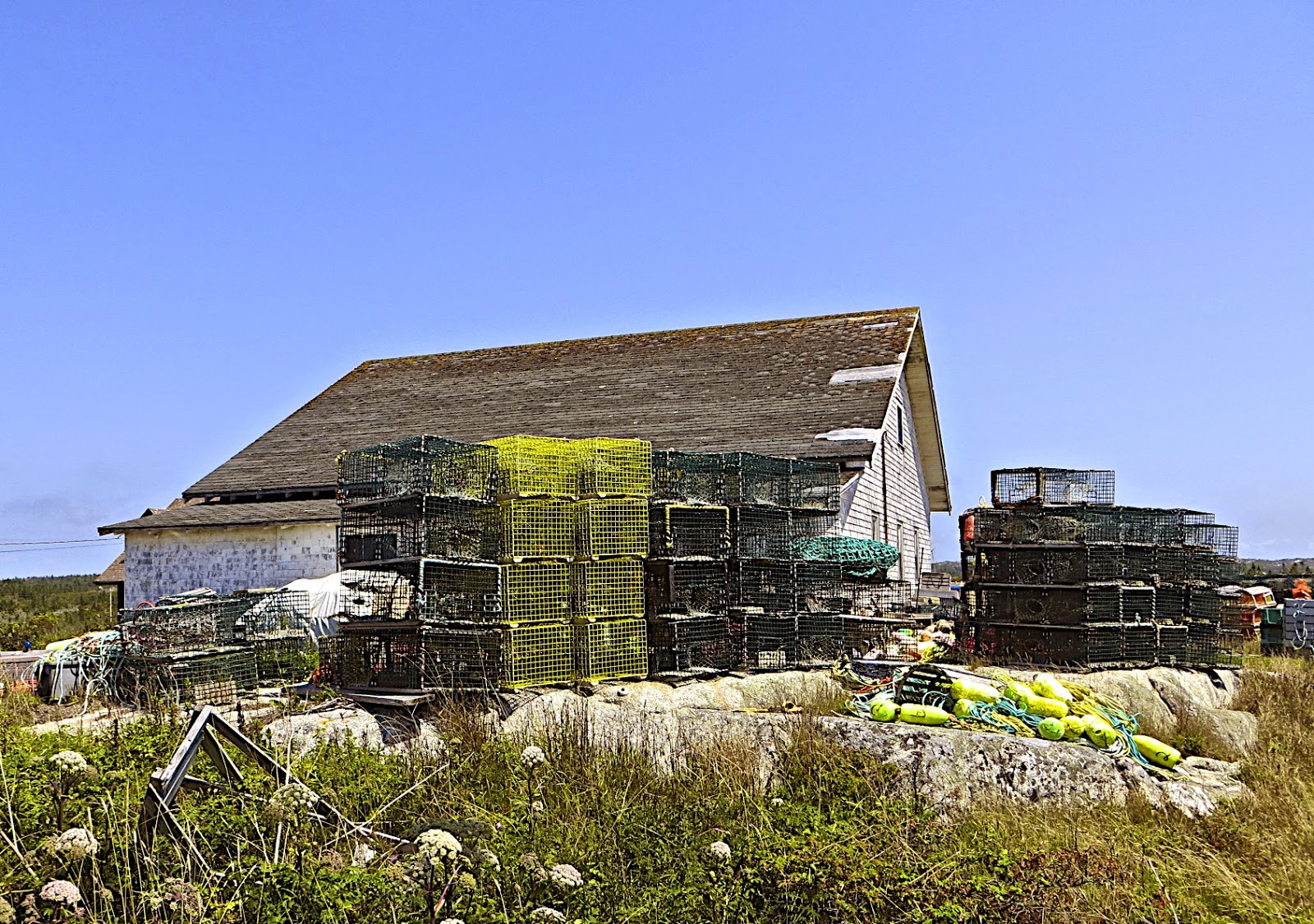 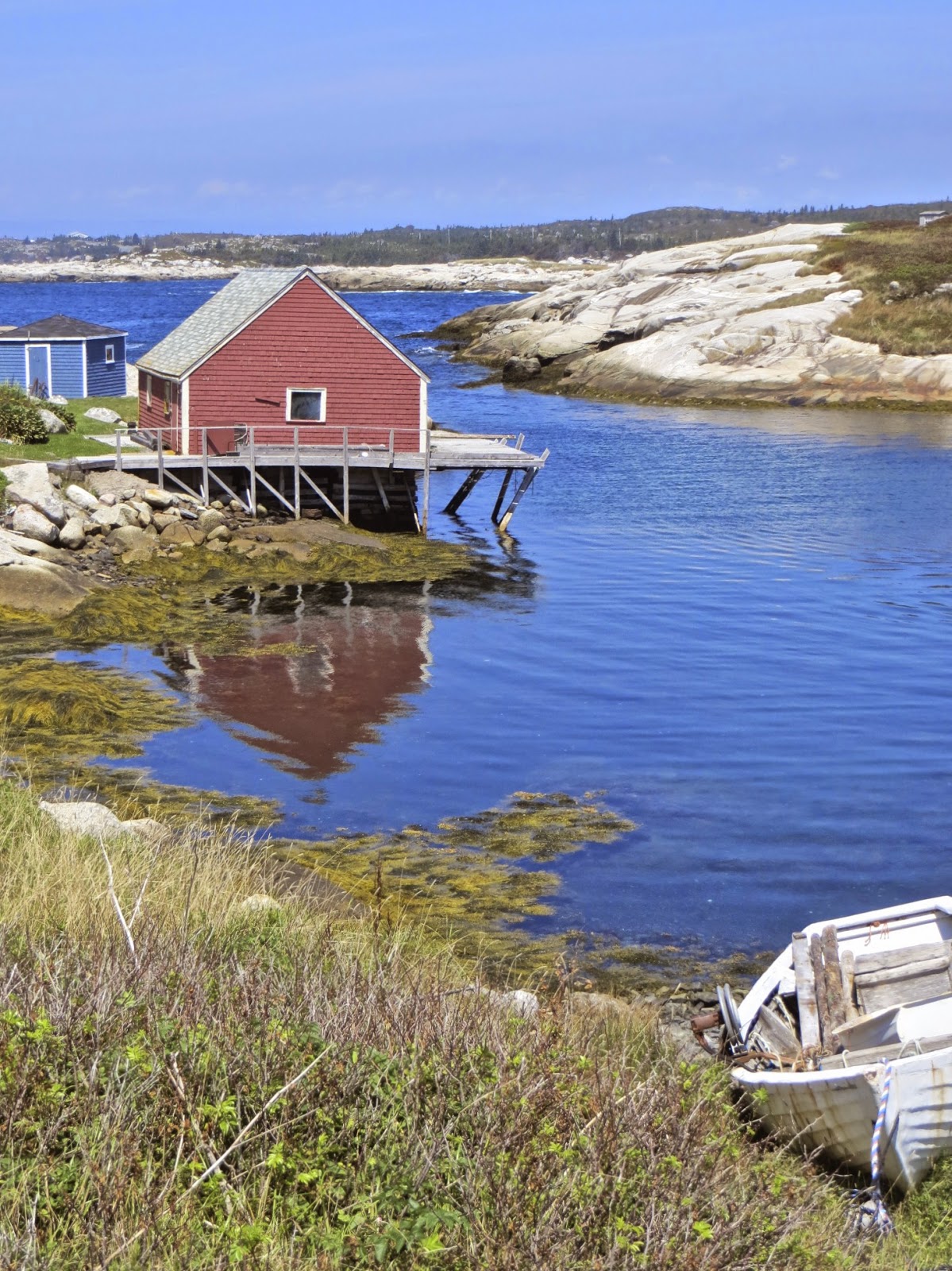 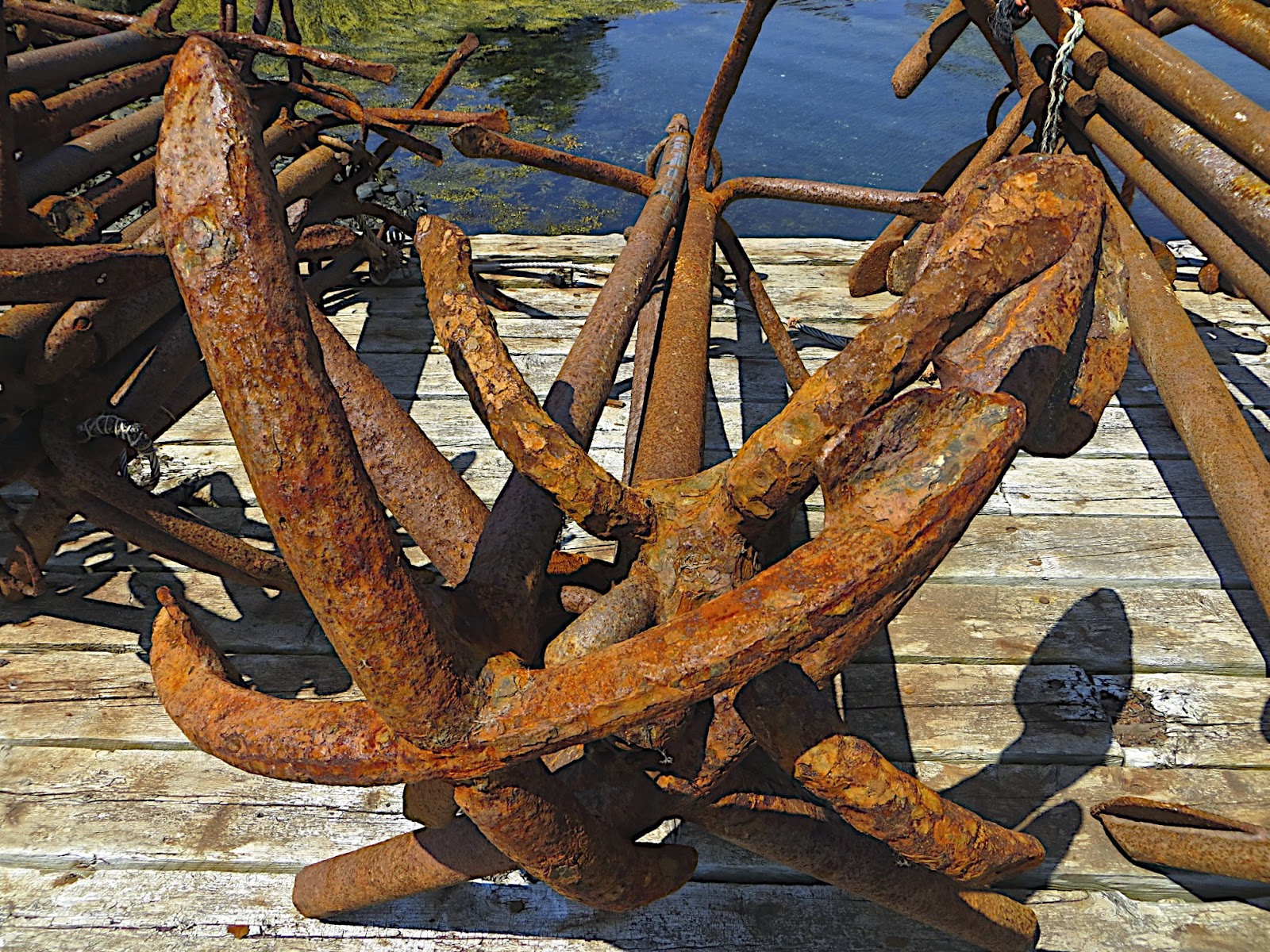 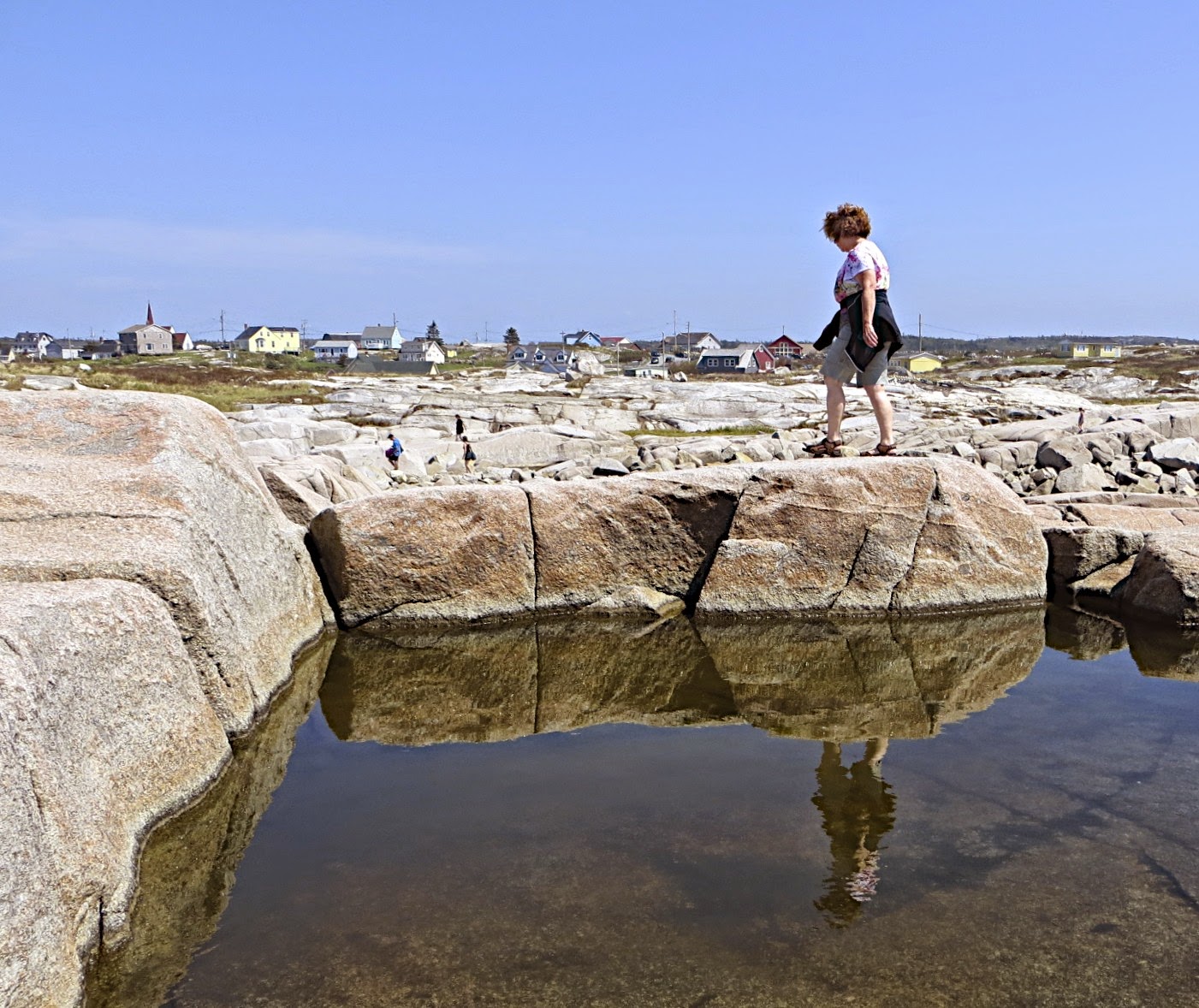 The granite that Barb and I love to explore
formed during the Devonian some 370 million years ago.
Massive crustal plates collided
and generated enough heat to melt rocks
at the base of the Earth's crust.
This molten material forced its way upward
until it slowly cooled and solidified into
a coarse mixture of quartz,
feldspar, muscovite and biotite:
the granite underlying the Peggys Cove area.
novascotia.ca 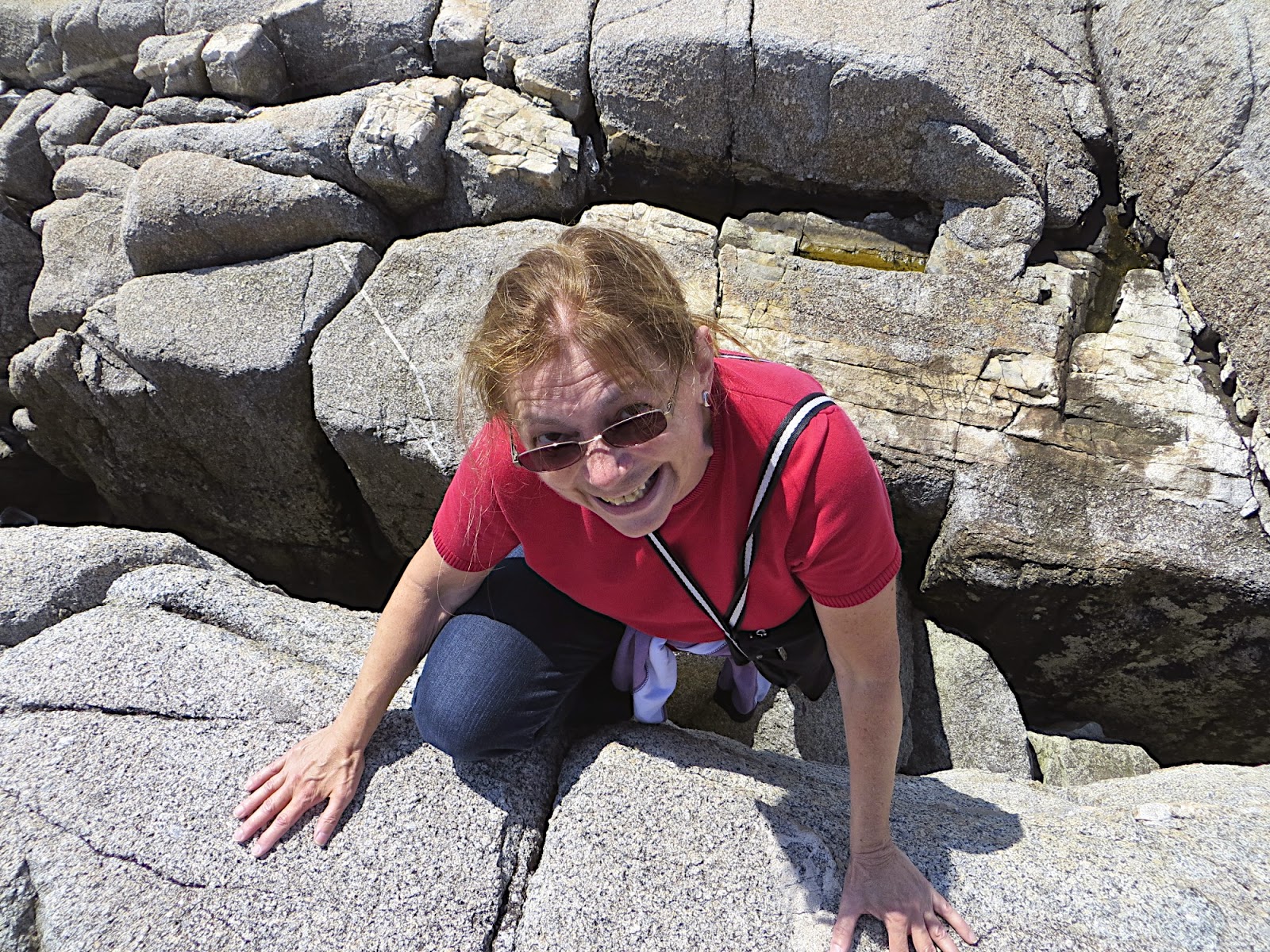 It's fun to wander around Peggys Cove
and see the boats, wharves, sheds,
and equipment used by the fishermen. 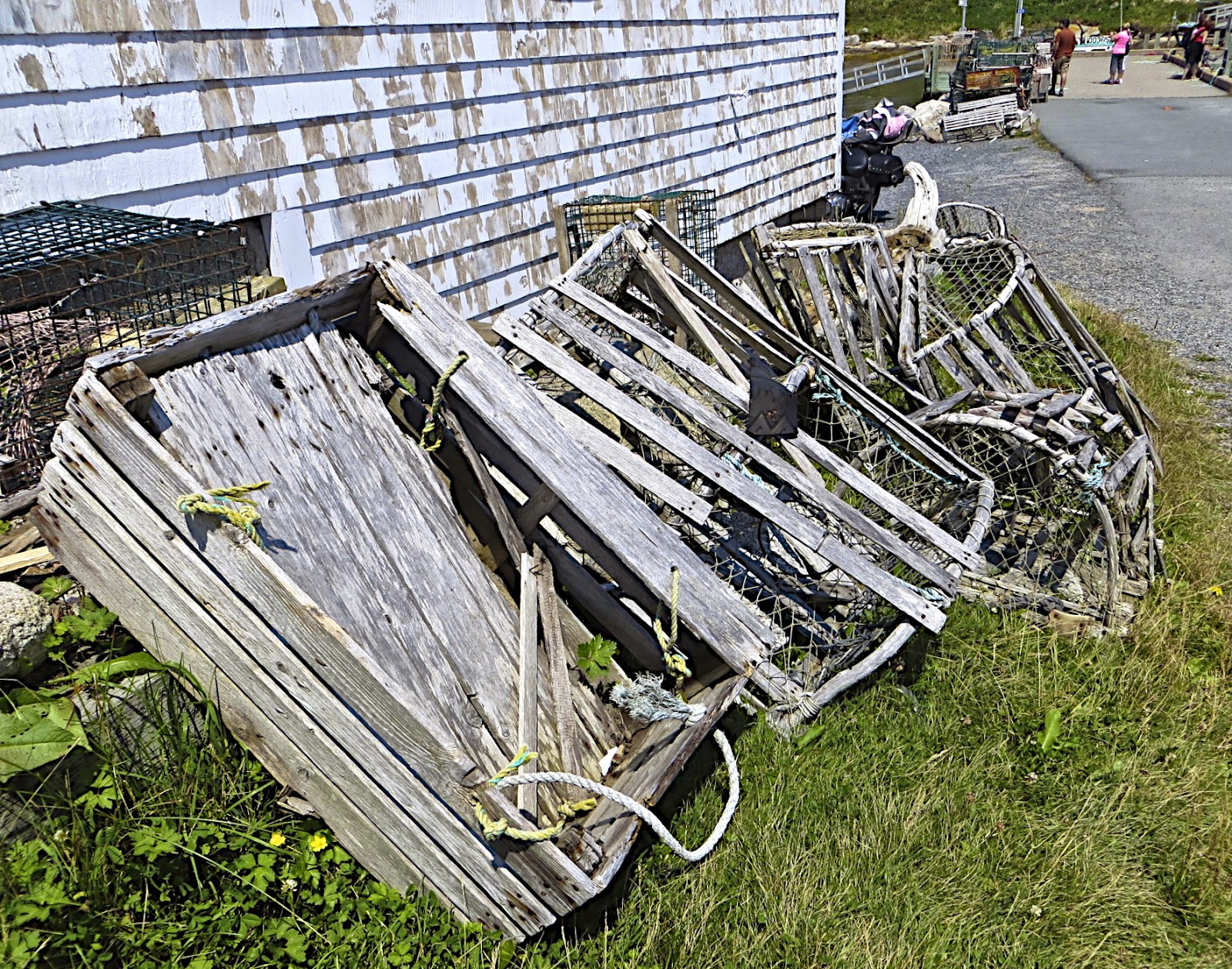 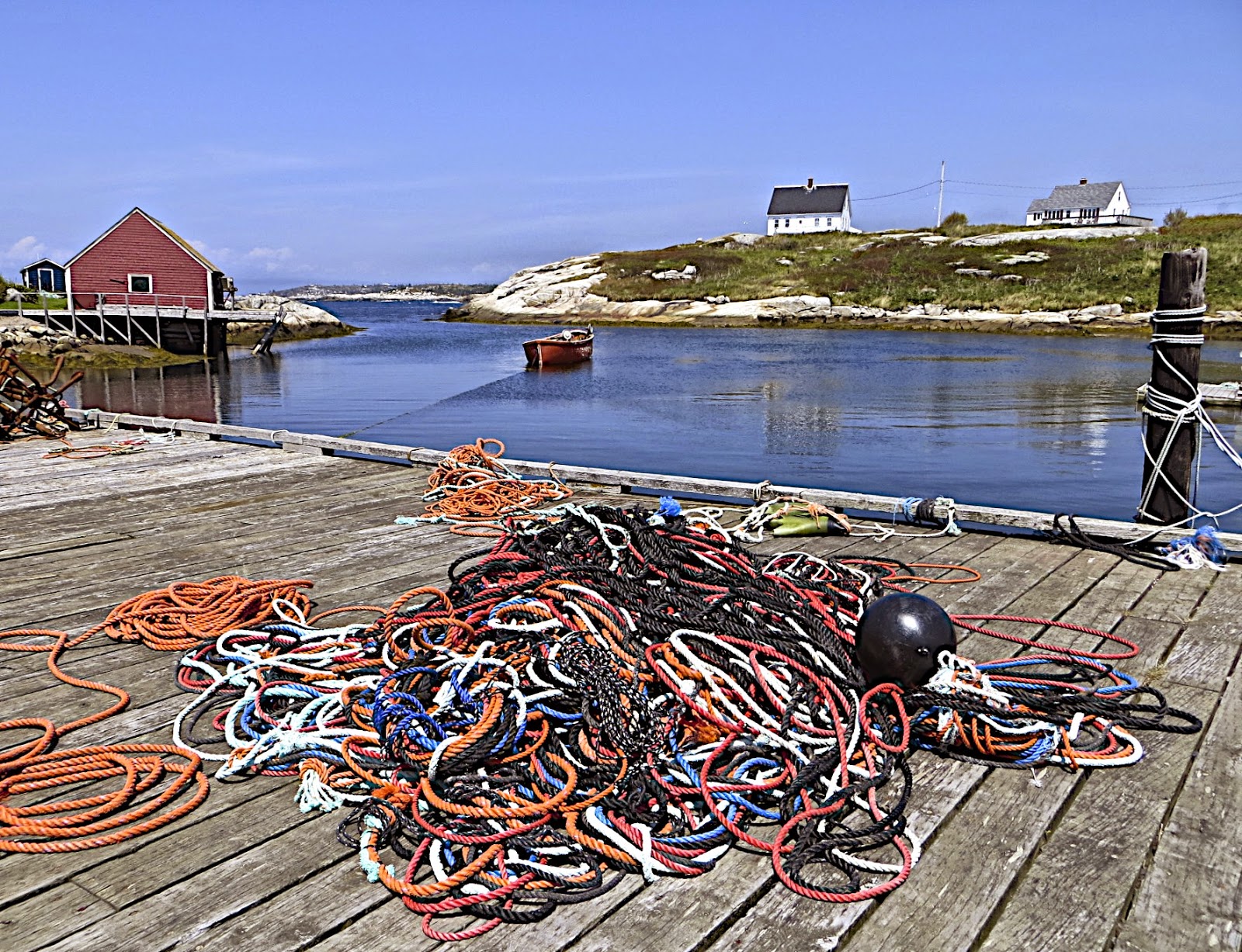 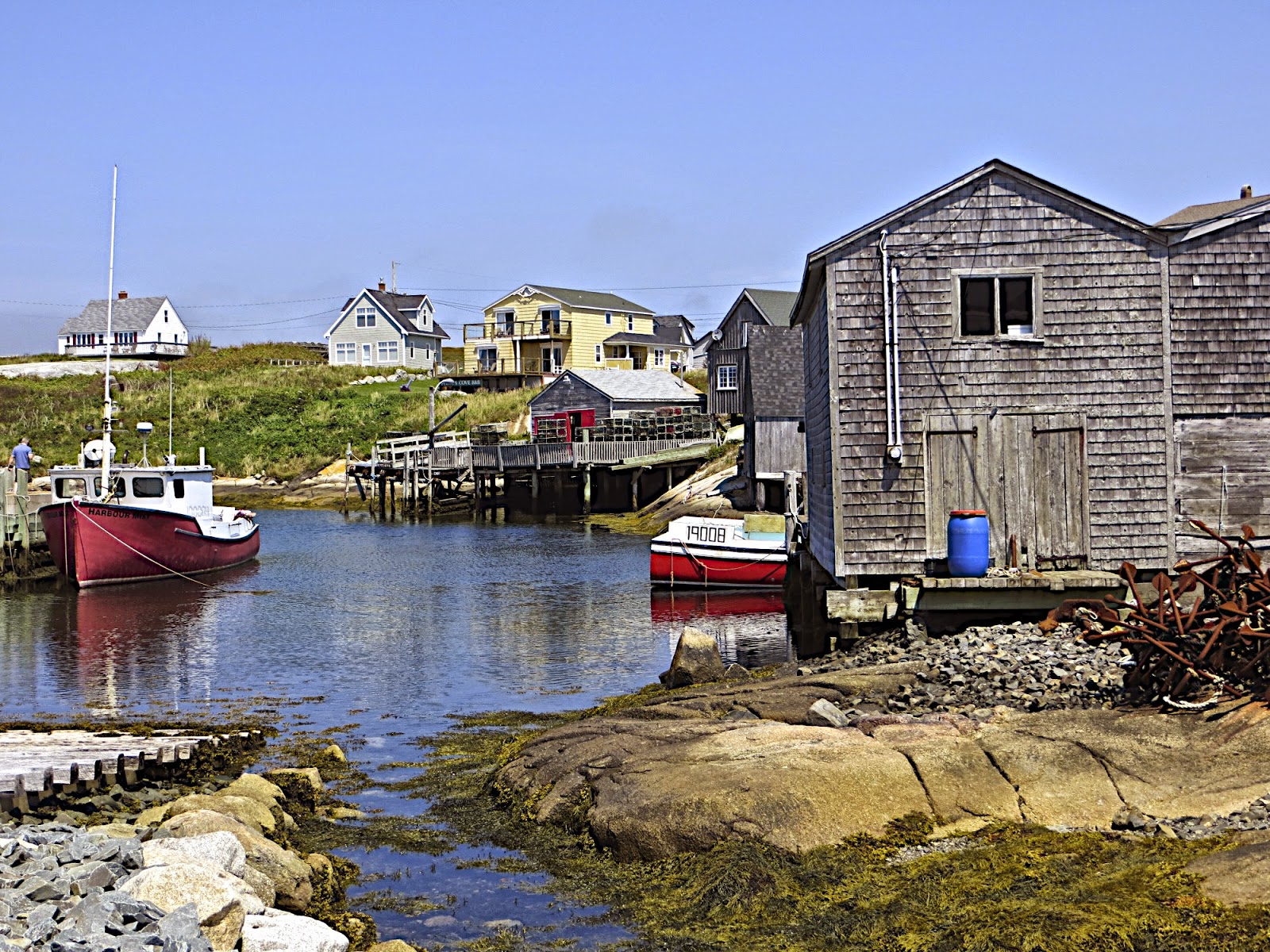 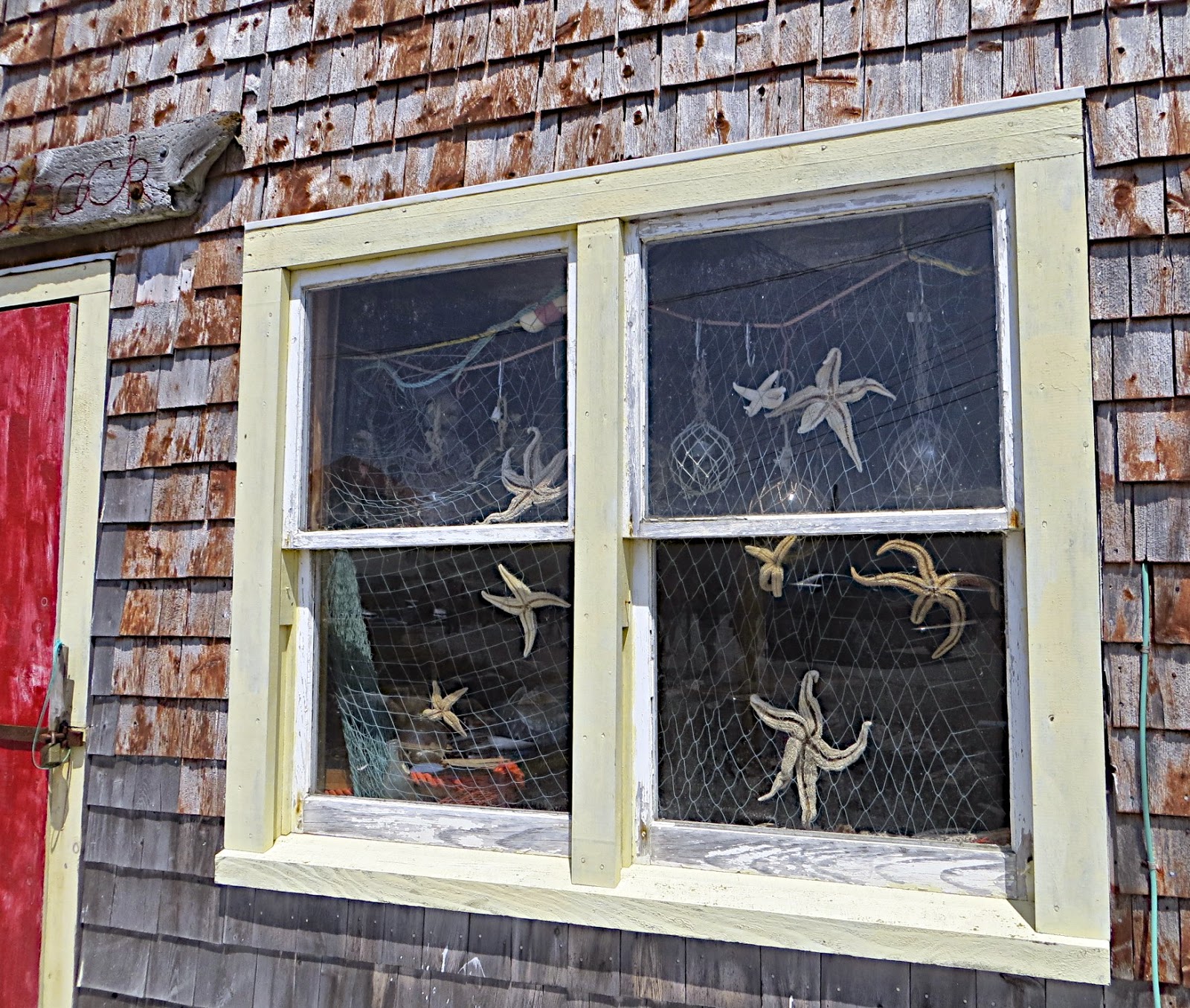 The most recent geological event
that shaped the landscape in the area
occurred between 10,000 and 70,000 years ago.
An ice sheet several kilometers thick
covered most of Nova Scotia.
Rocks at the bottom of the moving ice
scraped and gouged the granite bedrock
and plucked out huge boulders and rocks.
When the glaciers retreated,
they left these boulders and rocks,
known as erratics, behind.
novascotia.ca 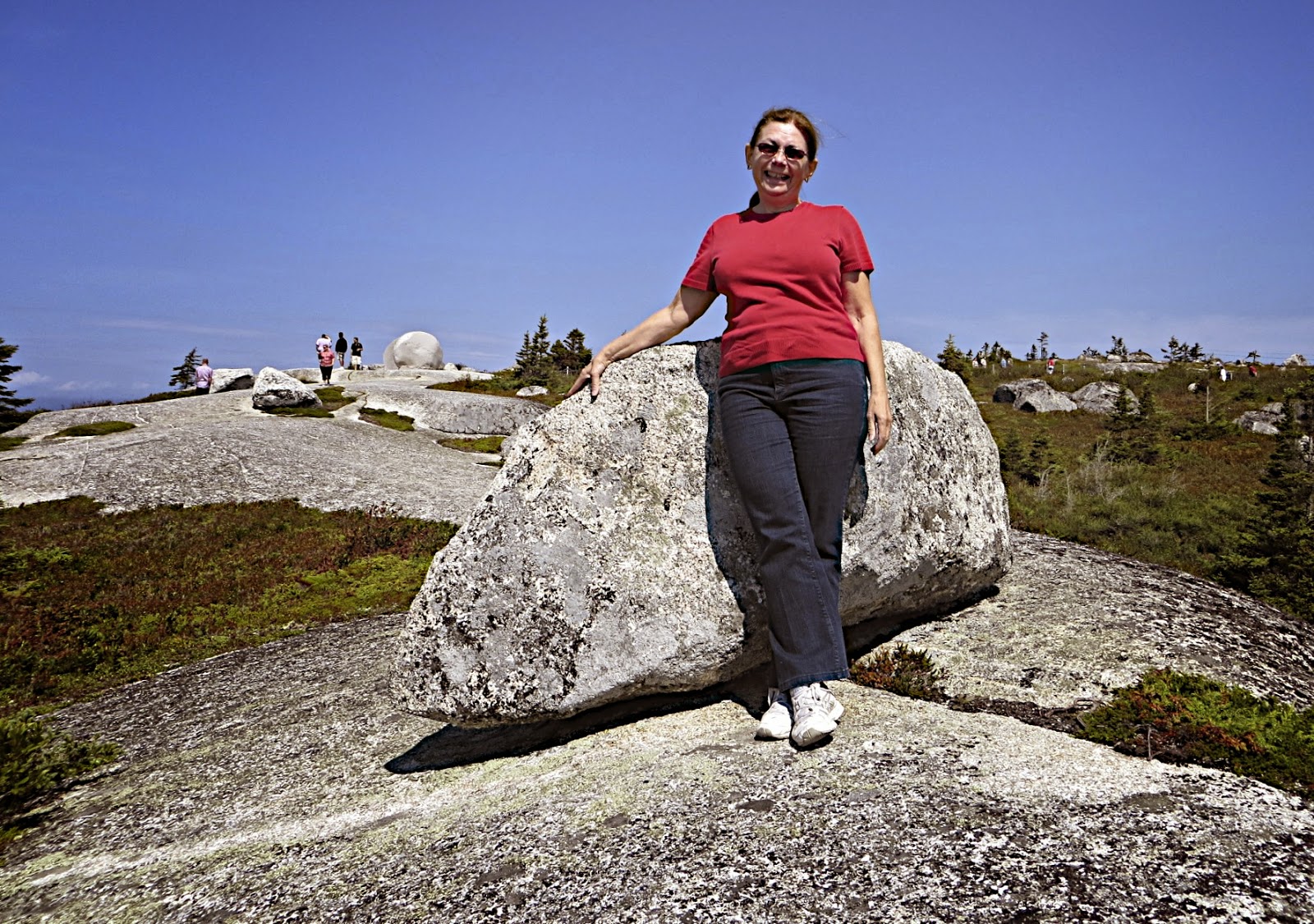 An Erratic Against an Erratic

The rugged and beautiful rocky coastline
in the vicinity of Peggys Cove
contains bogs, inland ponds, and barrens.

In 1962, the Province of Nova Scotia passed
the Peggys Cove Commission Act,
establishing a preservation area and
prohibiting development in and around the village.
wikipedia 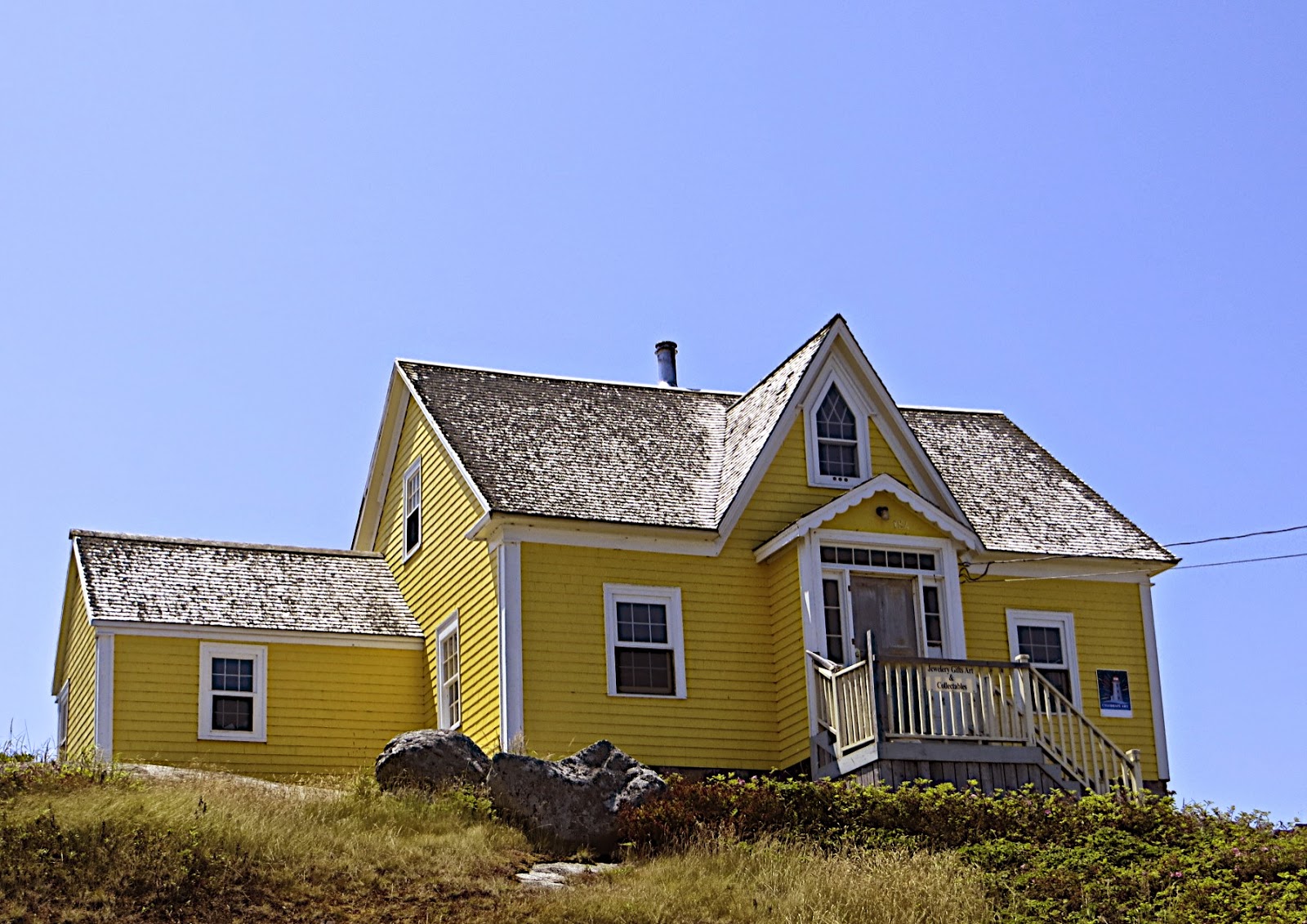 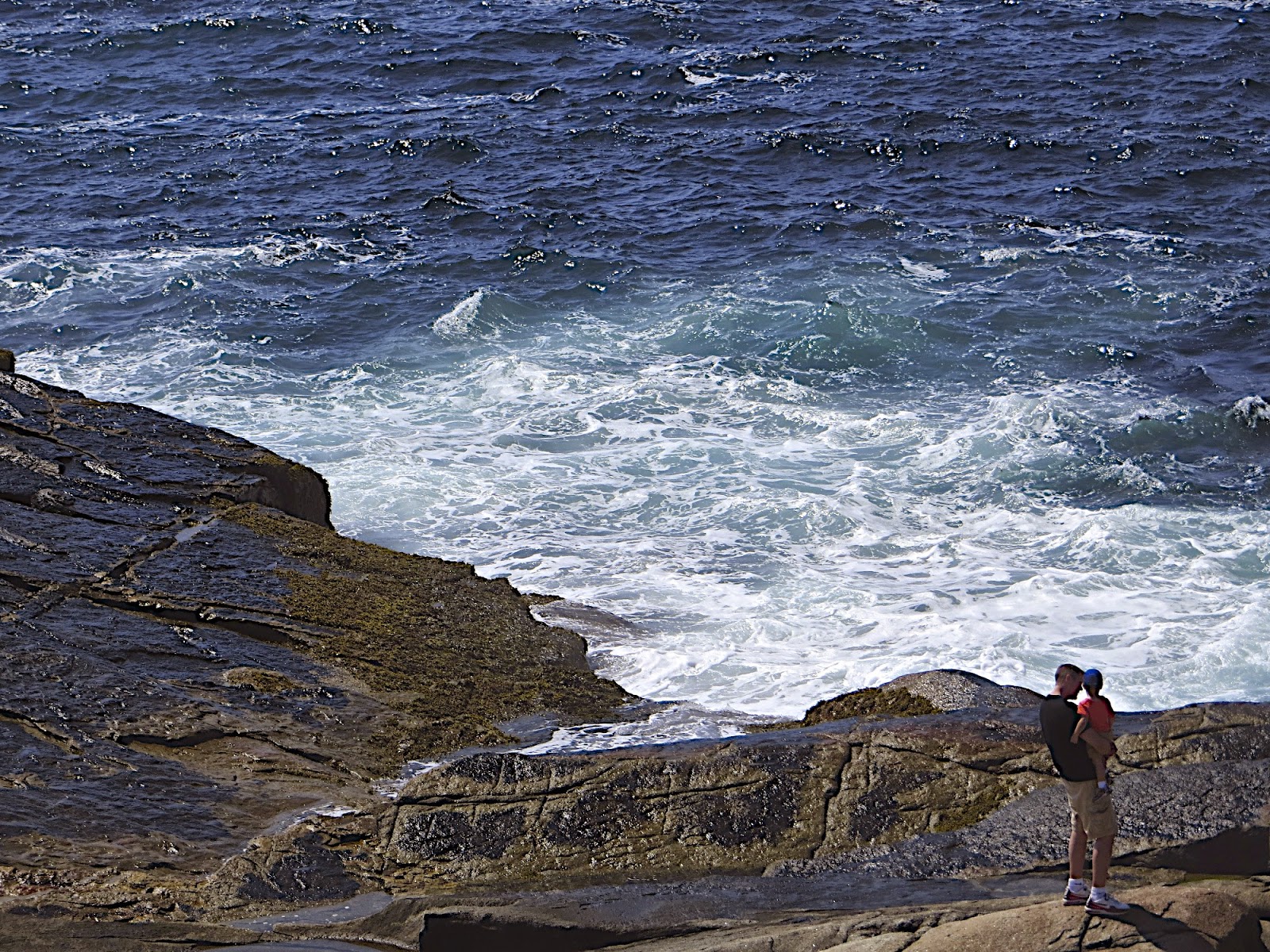 I can't wait to go back again!

Maybe one day
you will be able to visit
this special place too! 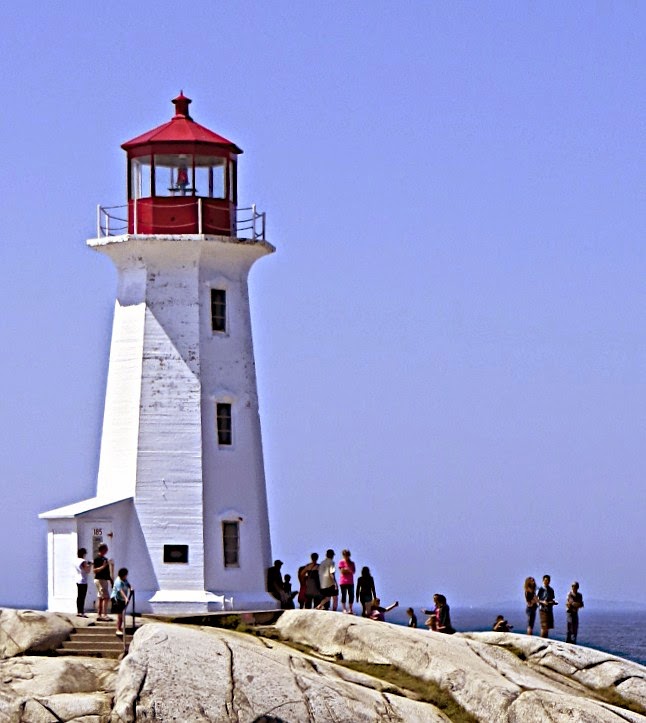