Well, I can tell you right now, that in all of my life, I never expected to be in Great Brehat, Newfoundland!  And yet here I was in the summer of 2011 scrambling up the boardwalk and gazing out to sea looking for icebergs - chasing an iceberg dream with my two sisters and my husband Terry. 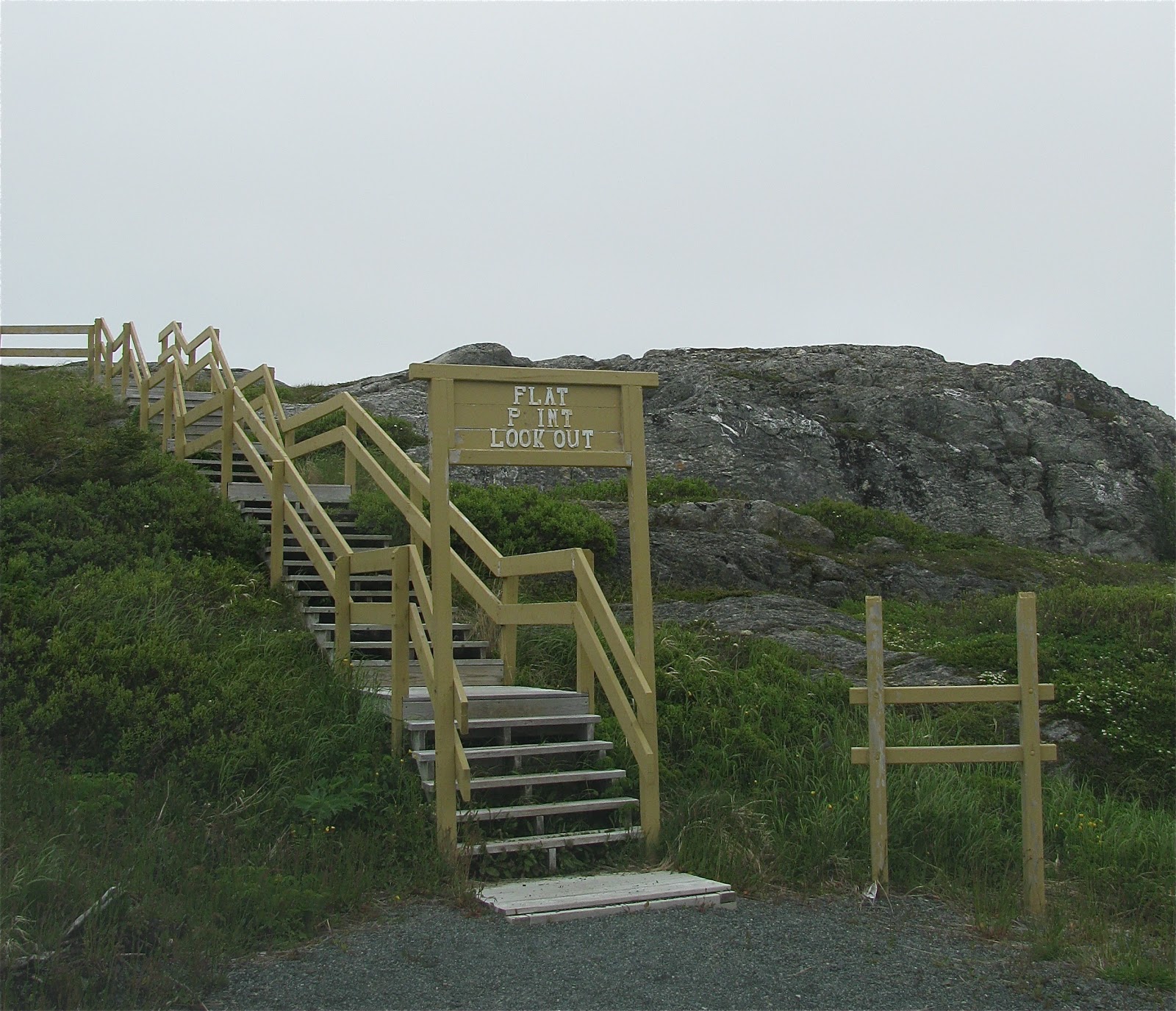 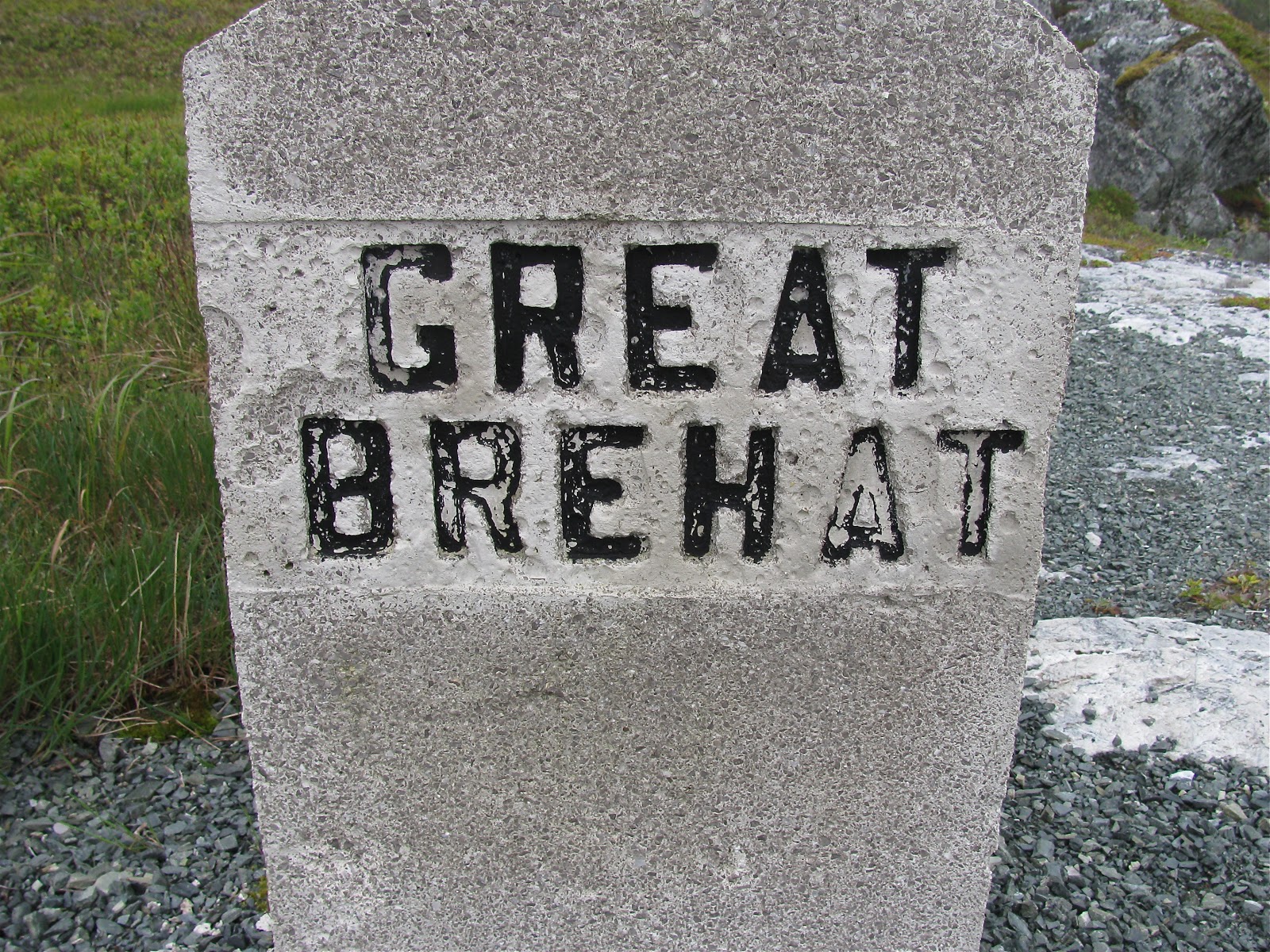 We had been in and out of little coves all day in the Back of Nowhere on the Great Northern Peninsula, and this was our last stop.  Our hot coffee at the St. Anthony Tim Hortons earlier in the afternoon was a distant memory.  We were cold and tired, but still exhilarated at the thought of more icebergs.

At least I was!  And I am an irresistible force! 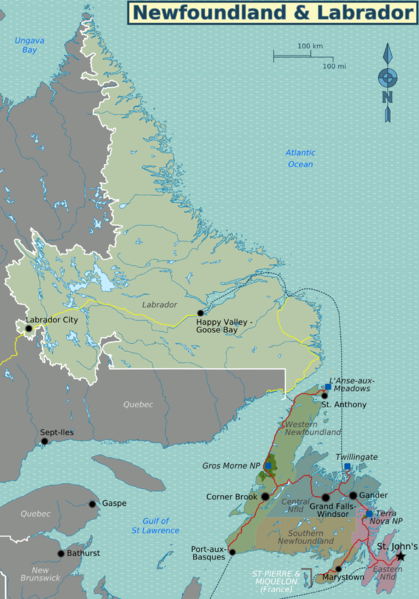 "And where on Earth is Great Brehat?" you might ask.
Follow the Great Northern Peninsula of Newfoundland
to its top just above the big bay on its right side.
There you will find the town of St. Anthony.
Great Brehat is located a short distance
up the coast from St. Anthony.

Great Brehat is only
7.7 miles (12.4 kilometers)
northeast of St. Anthony,
but driving there
felt like traveling
back through decades
to an isolated place
and a time long past.

Great Brehat is one of several
small outports hugging the
rugged coast, including
St. Lunaire-Griquet
and St. Carol's.
The little fishing village
and rocky cliffs
overlooking the Atlantic Ocean
are lonely, but striking. 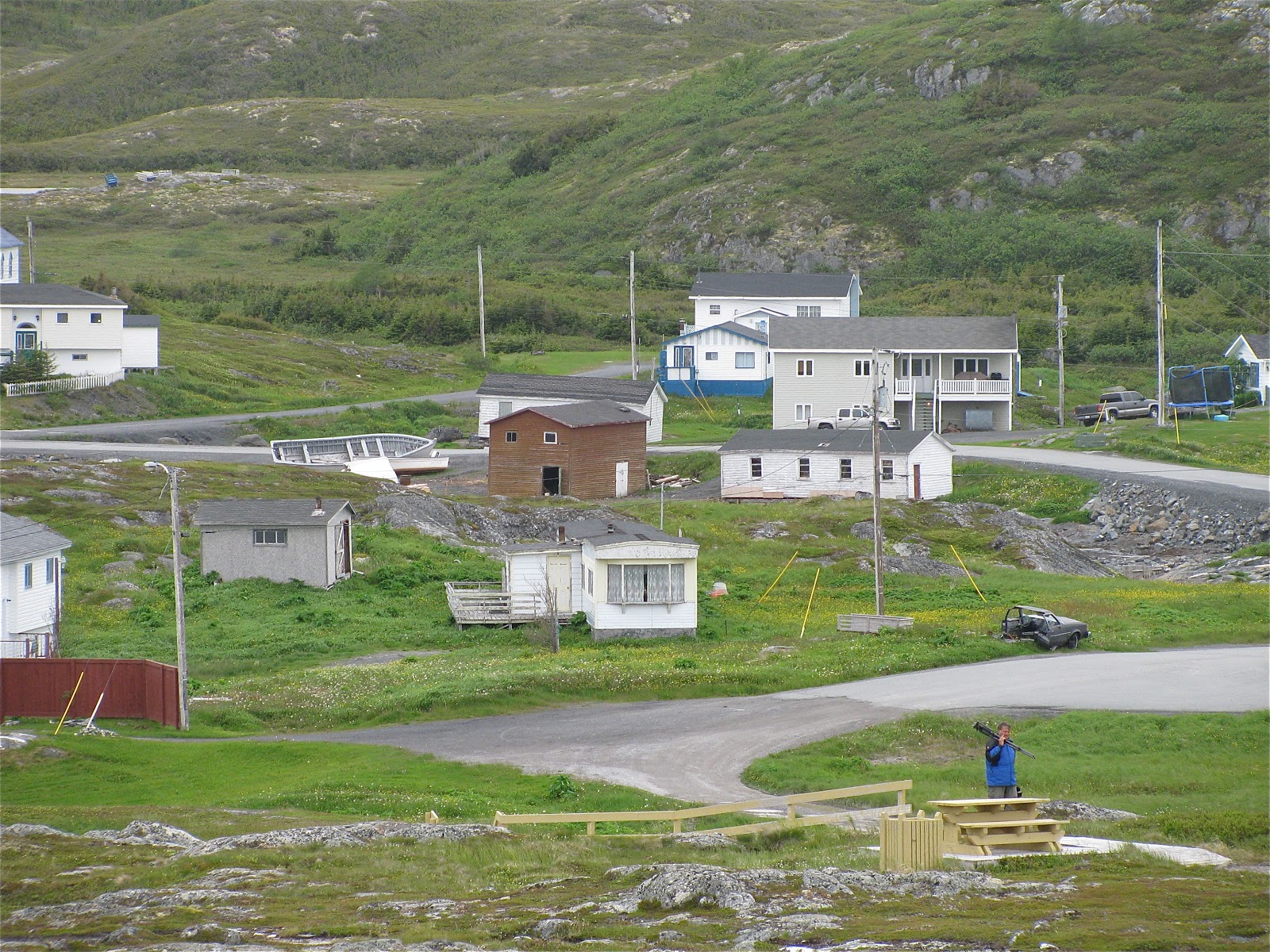 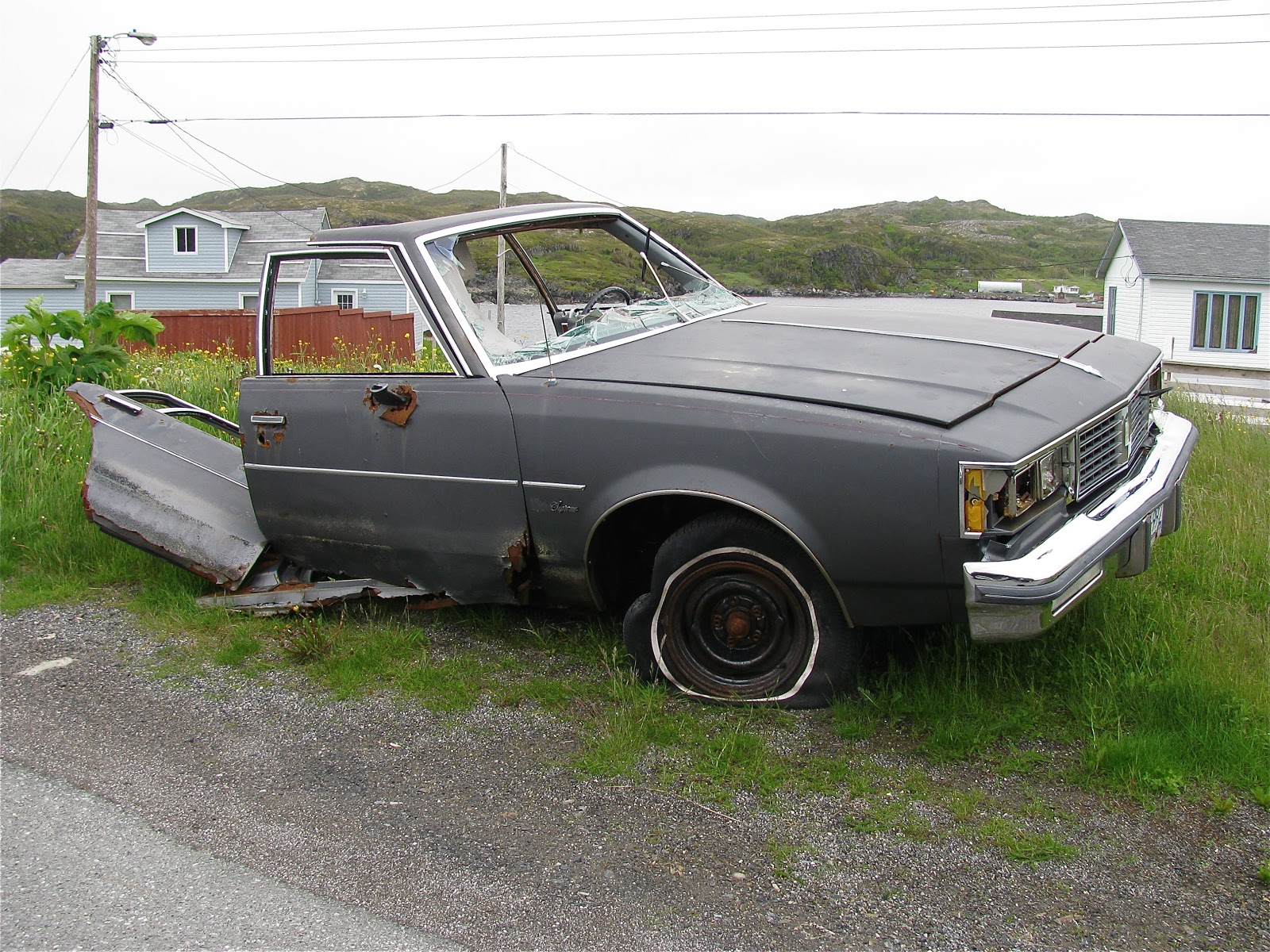 Currently Great Brehat has a population of 95, give or take one or two.  Its history dates to the 18th century when it was a fishing station on the French Shore of Newfoundland. Brehat is pronounced as Braha;  and, its name is thought to originate from an island off the Brittany shore.  Some two centuries later, Great Brehat acquired a community co-operative store through the efforts of Sir Wilfred Grenfell.  Another fifty years or so went by until Great Brehat was linked by road to its surrounding communities in 1971.  http://www.northernpeninsula.ca/home/great_brehat.htm 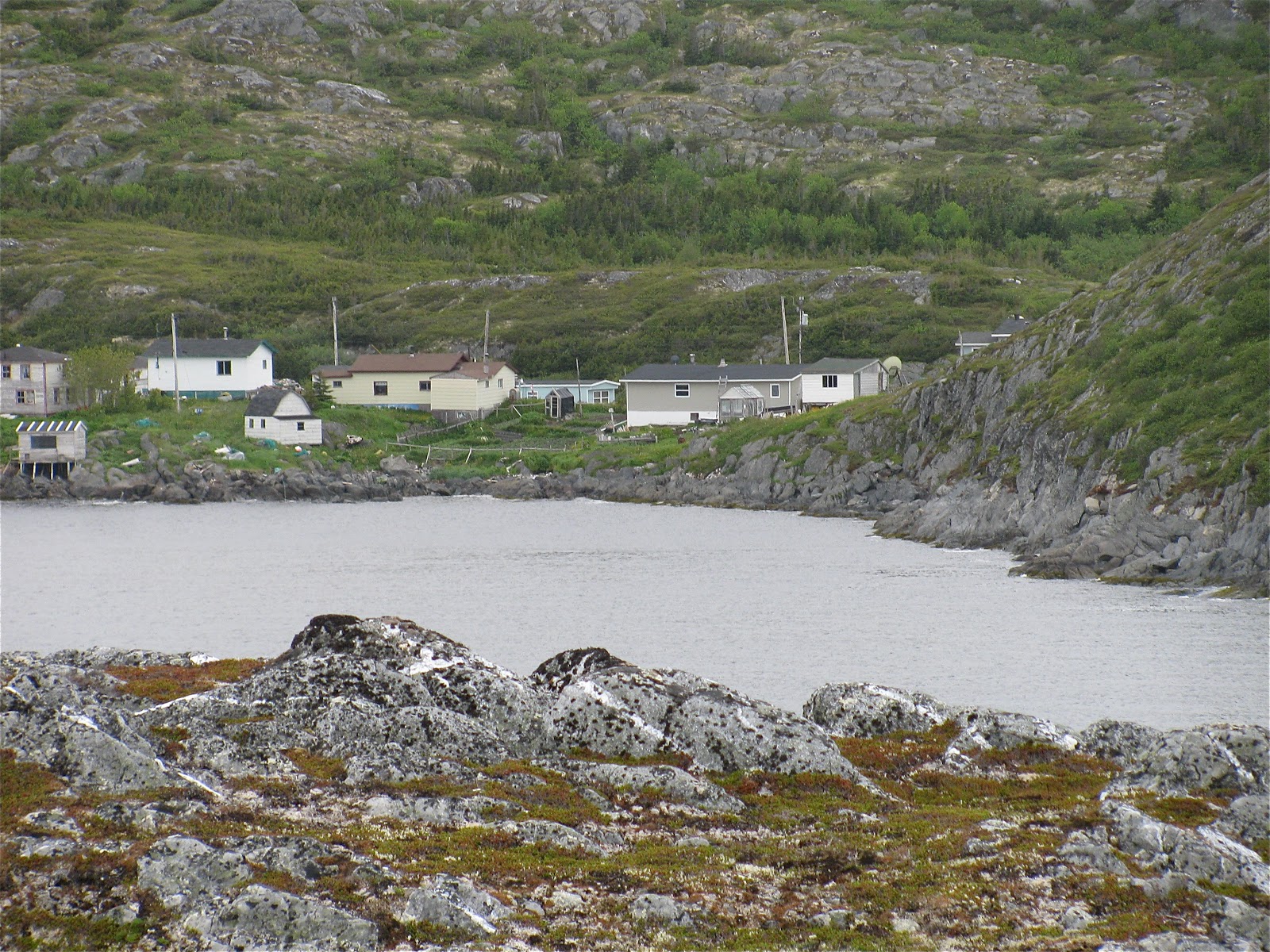 Sir Wilfred Thomason Grenfell is a monumental figure in the history of Newfoundland and Labrador.  In 1892, four years after Grenfell graduated from London Hospital Medical College, he was sent to Newfoundland as a medical missionary by The Royal National Mission to Deep Sea Fishermen.  His task was to improve the lives of fishermen and their families who lived and worked under difficult and dangerous conditions. 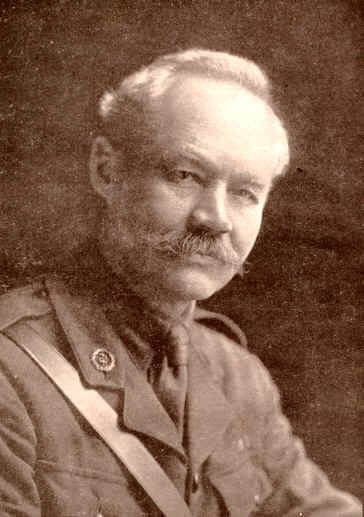 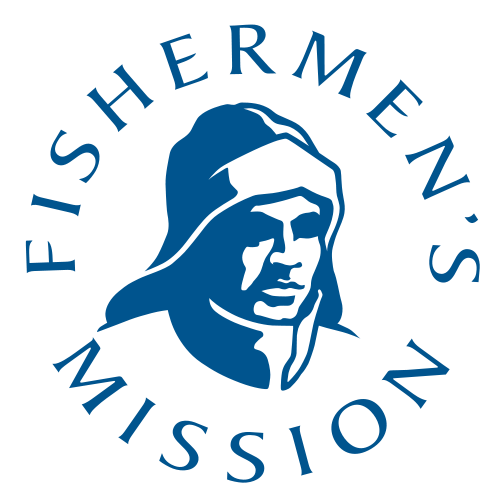 Grenfell began by establishing and staffing hospitals at Indian Harbour, Newfoundland; and later, he continued by building cottage hospitals along the remote coast of Labrador.  From his quest to improve the plight of Newfoundland fishermen, Grenfell went on to aid aboriginals and settlers along the coast of Labrador and the eastern side of the Great Northern Peninsula.  Grenfell was instrumental in developing an orphanage, building schools,  providing social work and industrial work projects, and in creating cooperatives such as the community co-operative store in Great Brehat.  In 1927 he was knighted for his social, educational, and medical work.  He died in 1940, and his ashes were placed in a rock face overlooking St. Anthony Harbour.  http://en.wikipedia.org/wiki/Wilfred_Grenfell 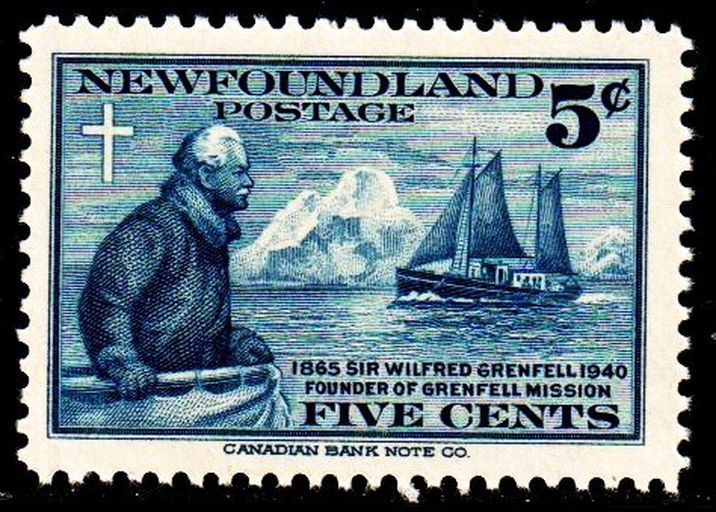 I'm not sure why, but Sir Wilfred Thomason Grenfell was the first Canadian historical figure I became aware of as a young child in Charlottetown, Prince Edward Island. 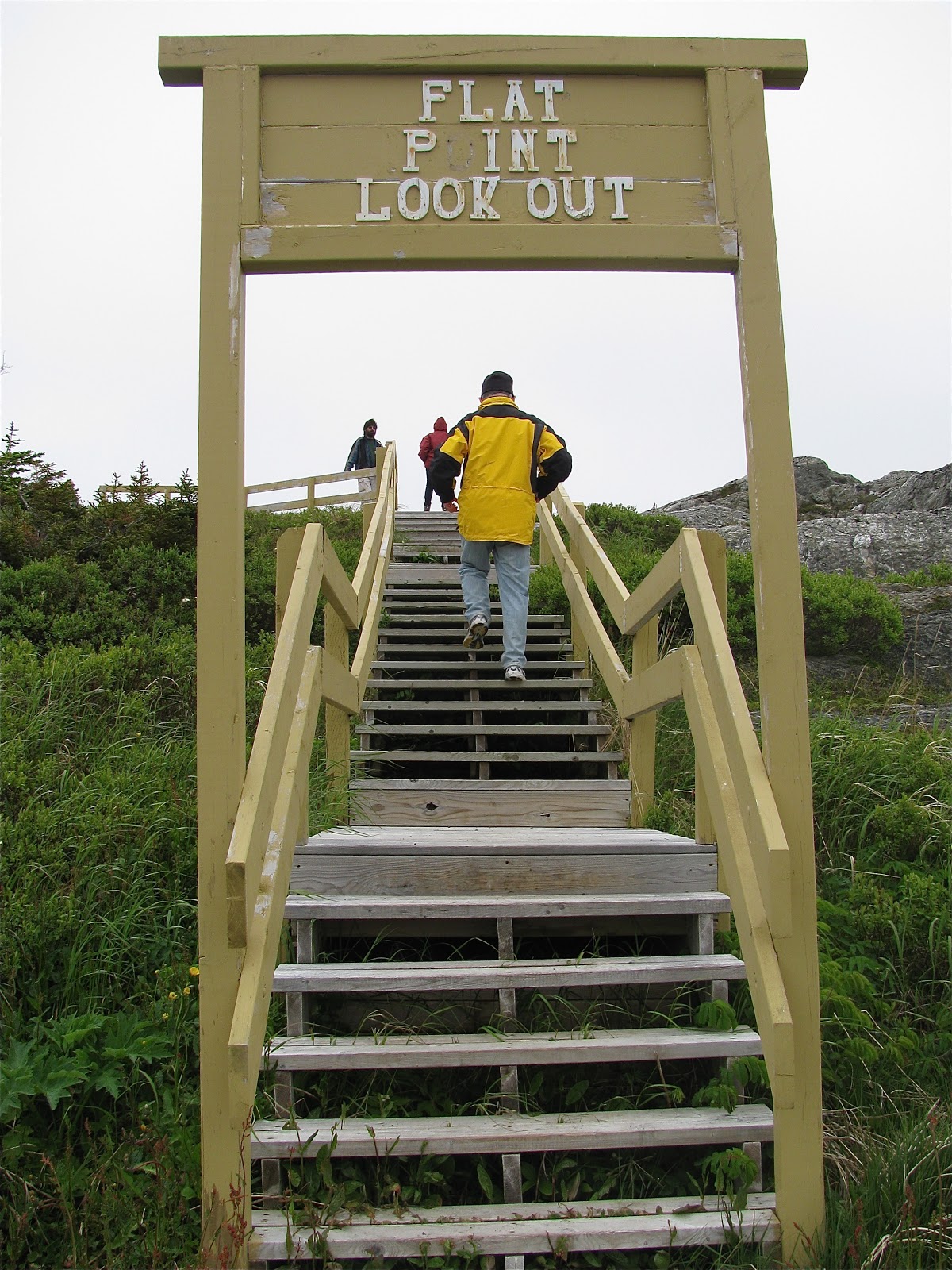 But back to icebergs!

Great Brehat has one of the ubiquitous coastal community walking trails found throughout Newfoundland and Labrador.

Located behind its cemetery, we
followed Flat Point Lookout Trail to where we could scan the ocean.

Great Brehat did not disappoint!

In the distance
was a huge iceberg! 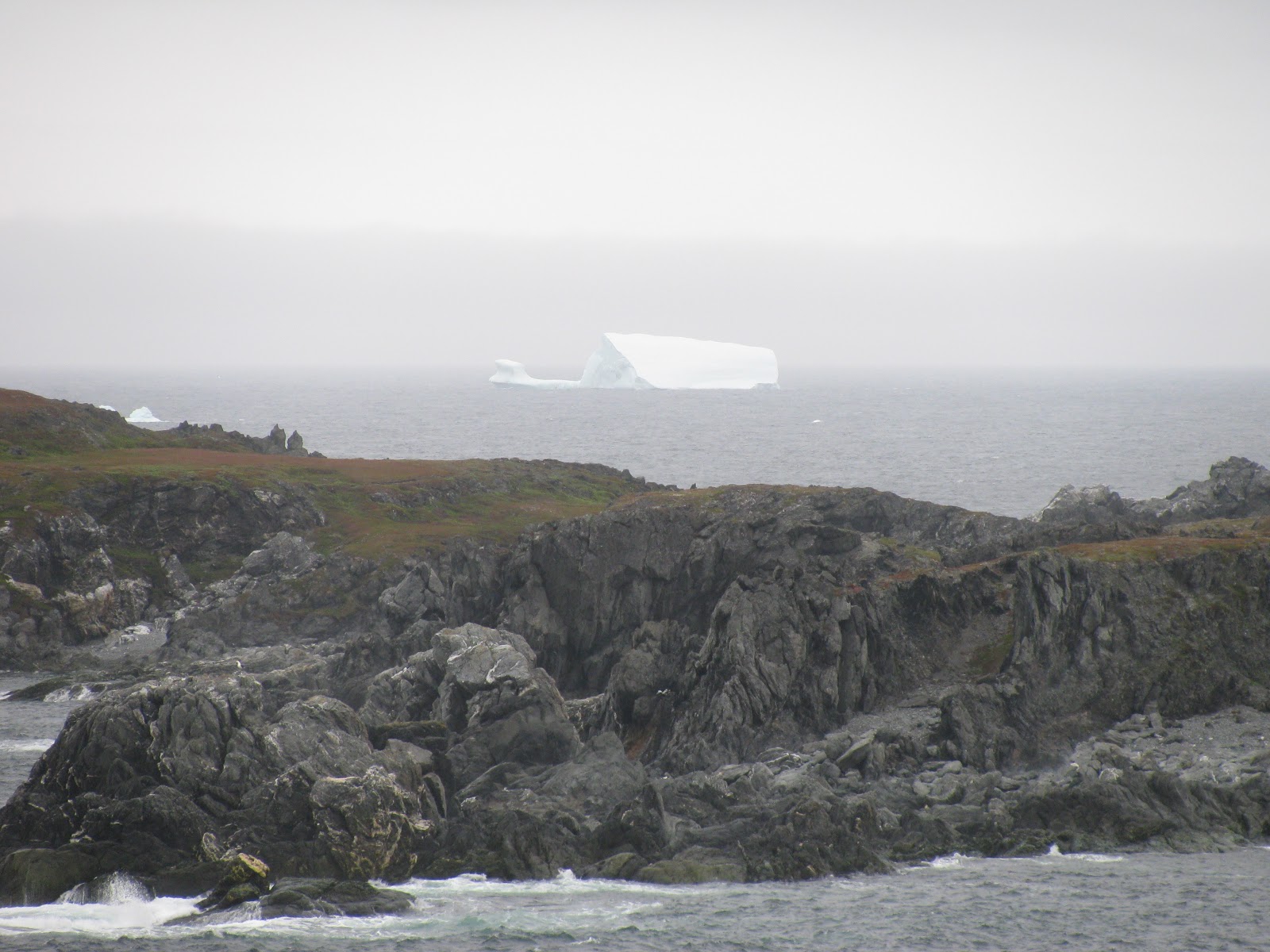 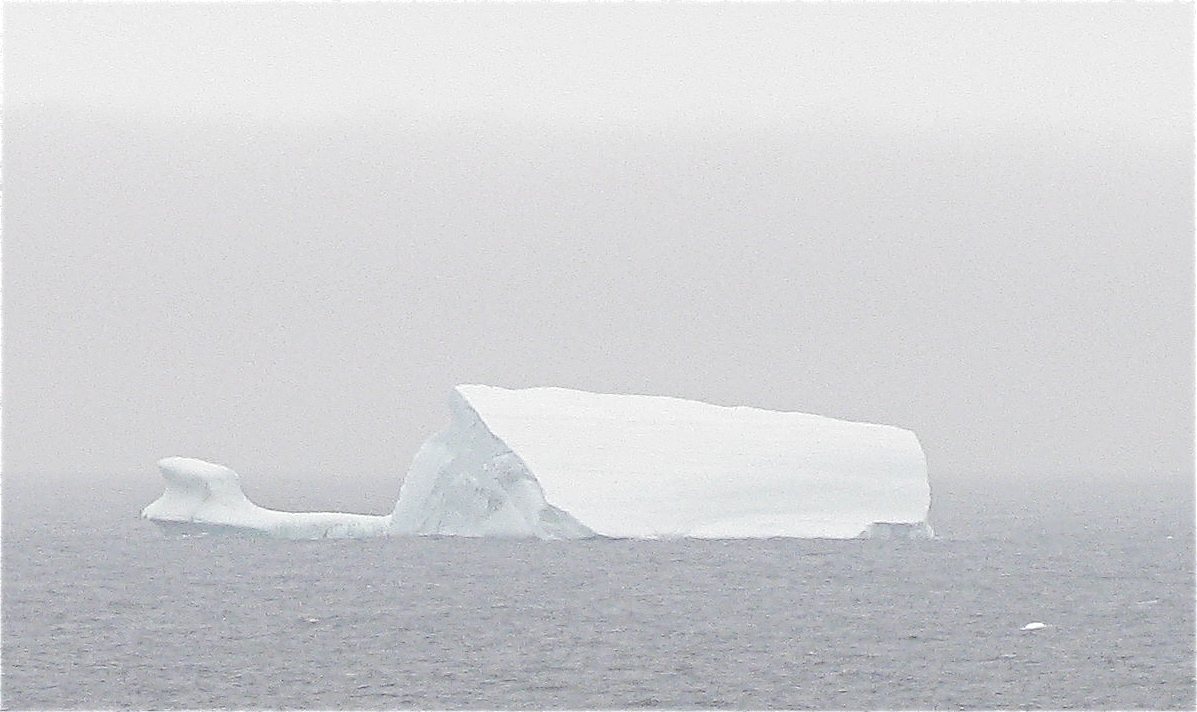 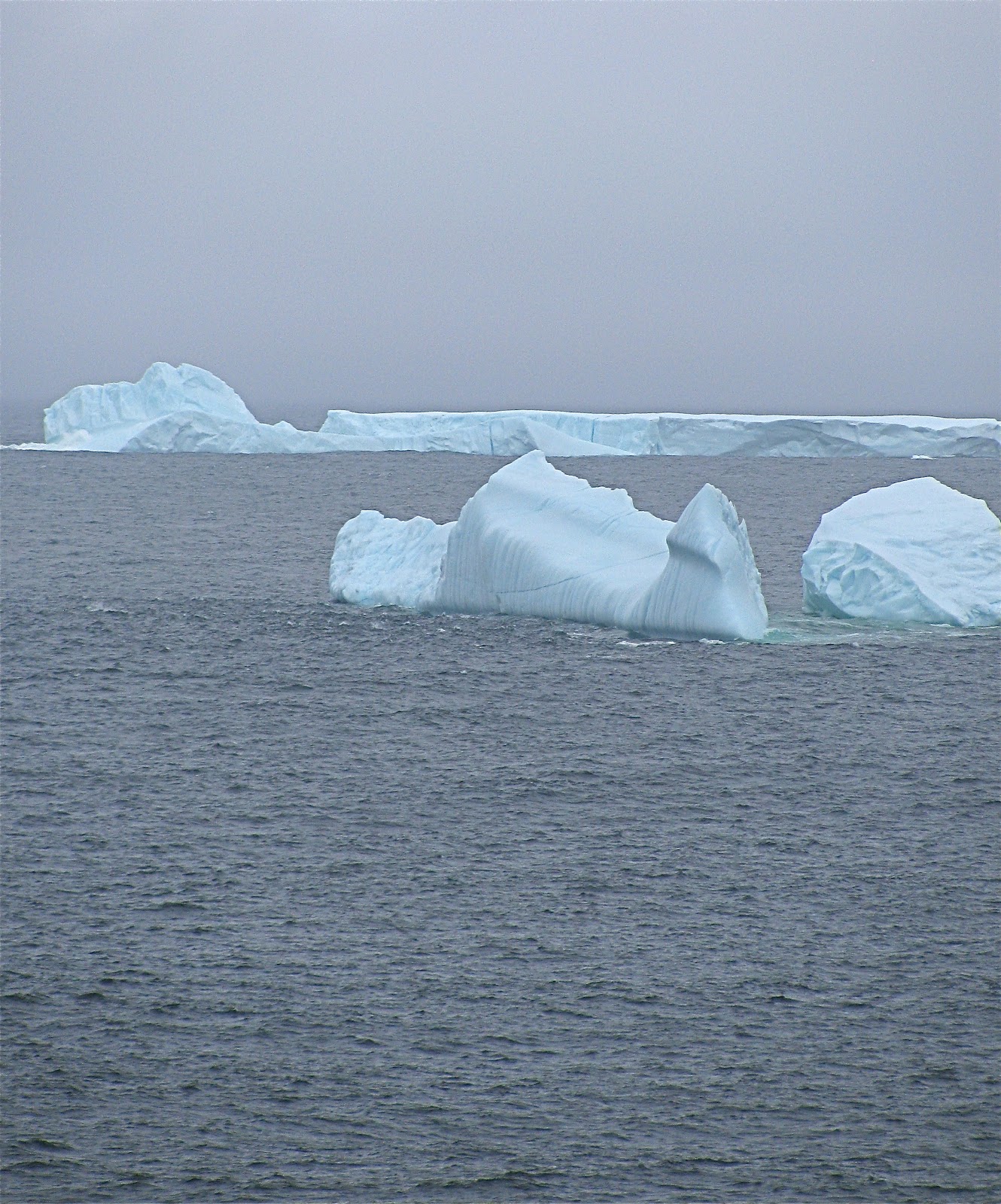 We, along with other iceberg chasers,
took in the awesome beauty of icebergs in the bay
and the rugged coastline of the Great Northern Peninsula. 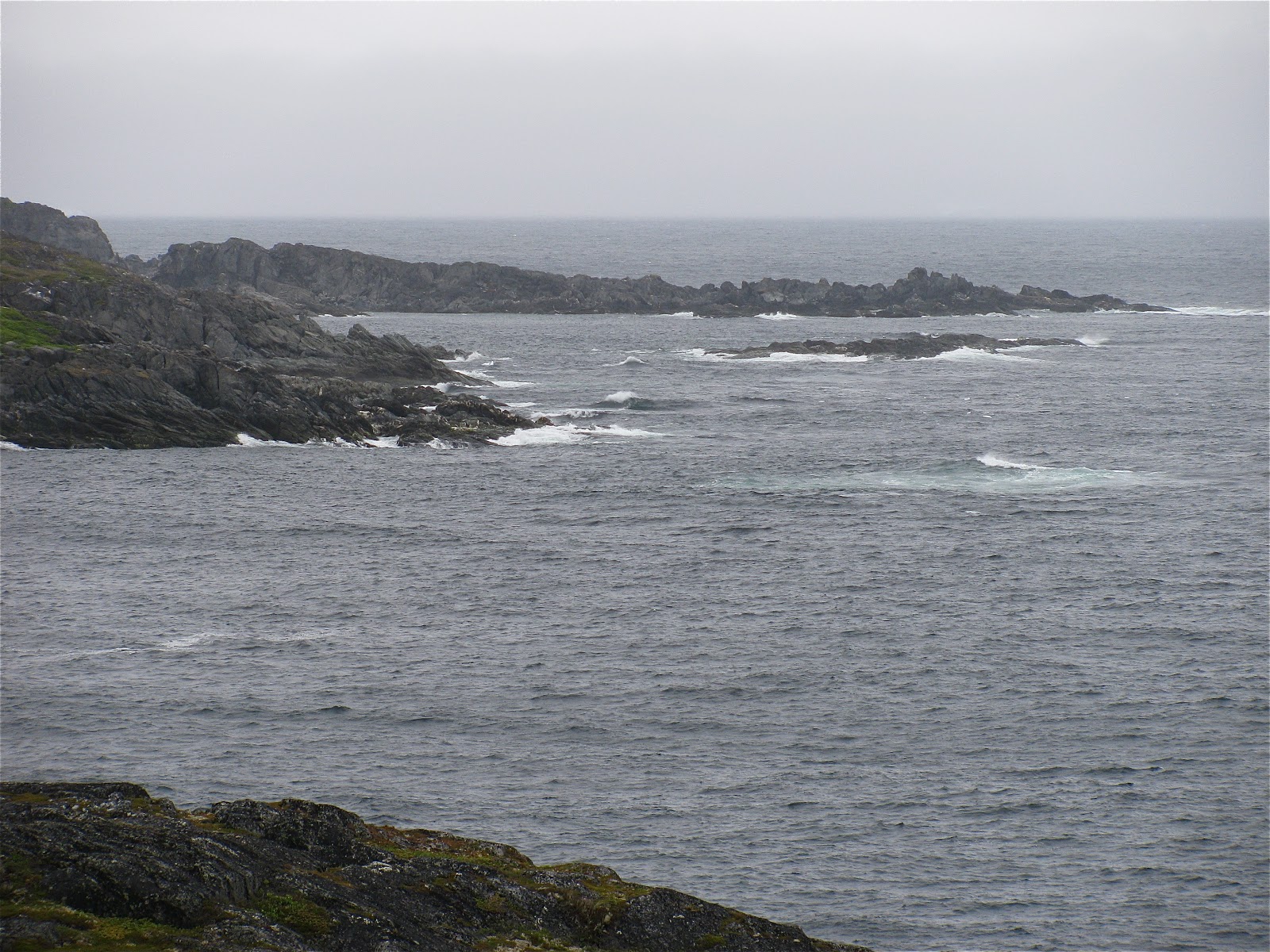 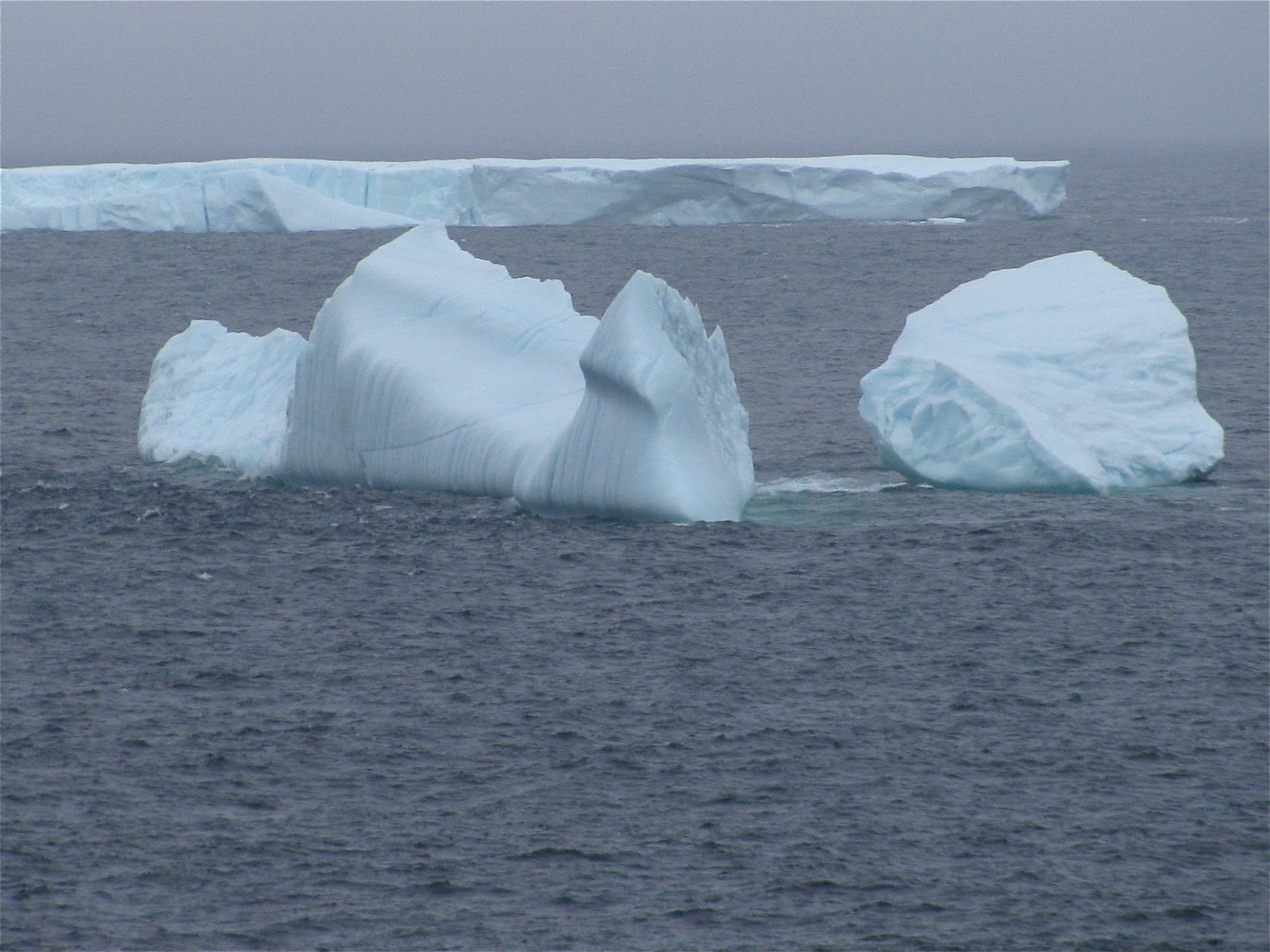 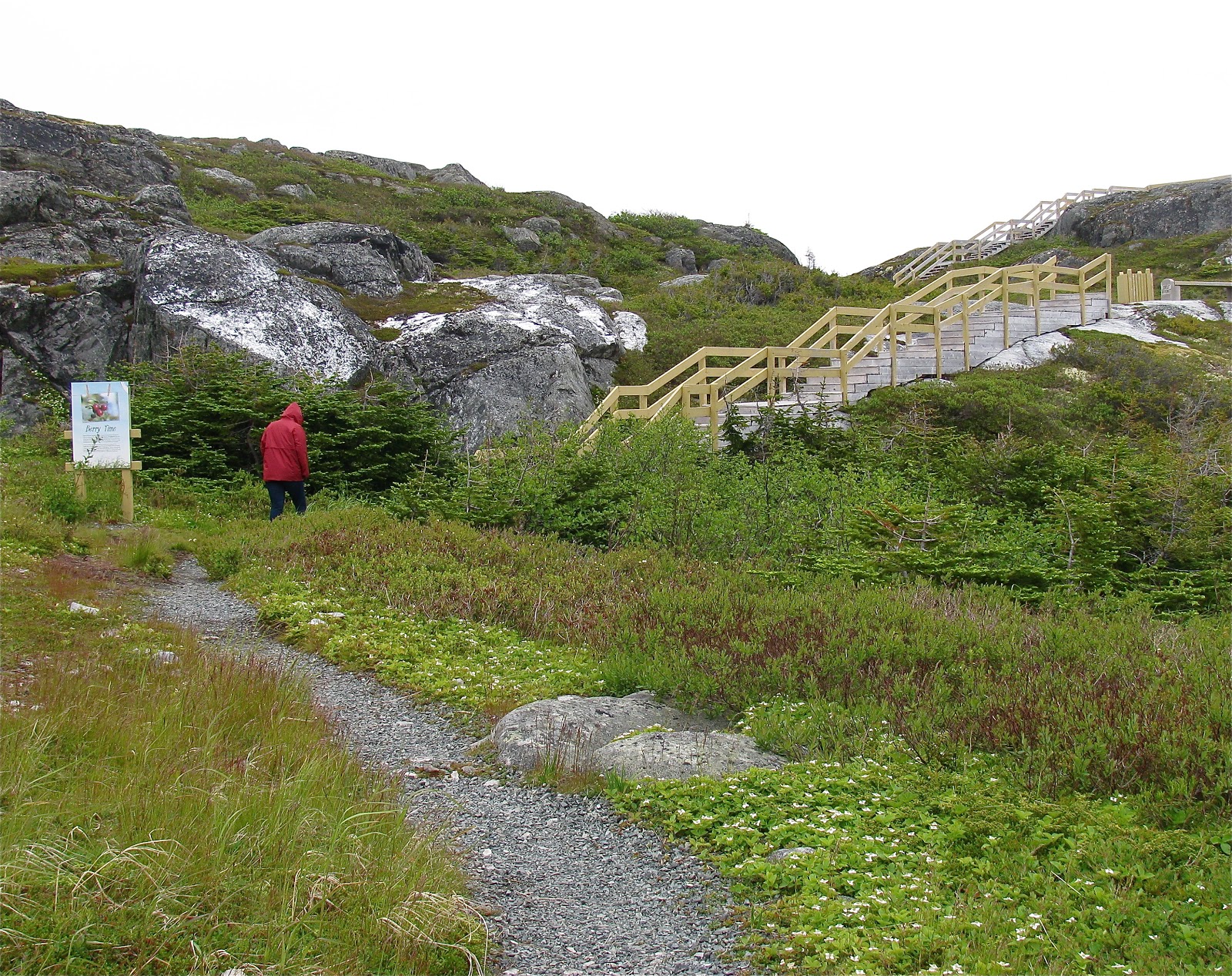 My sister Bertie Walks the Trail 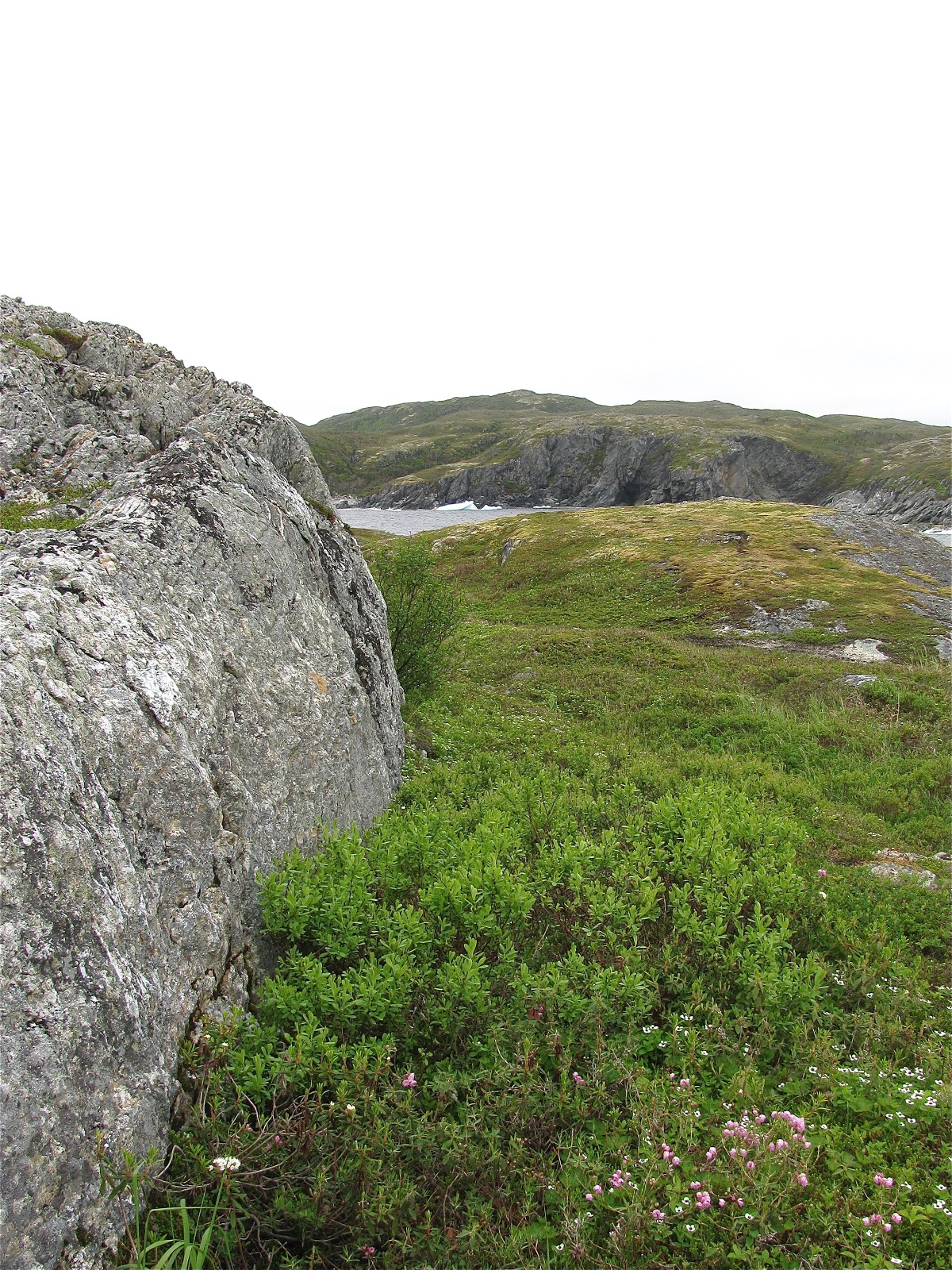 Summer Flowers Along the Trail 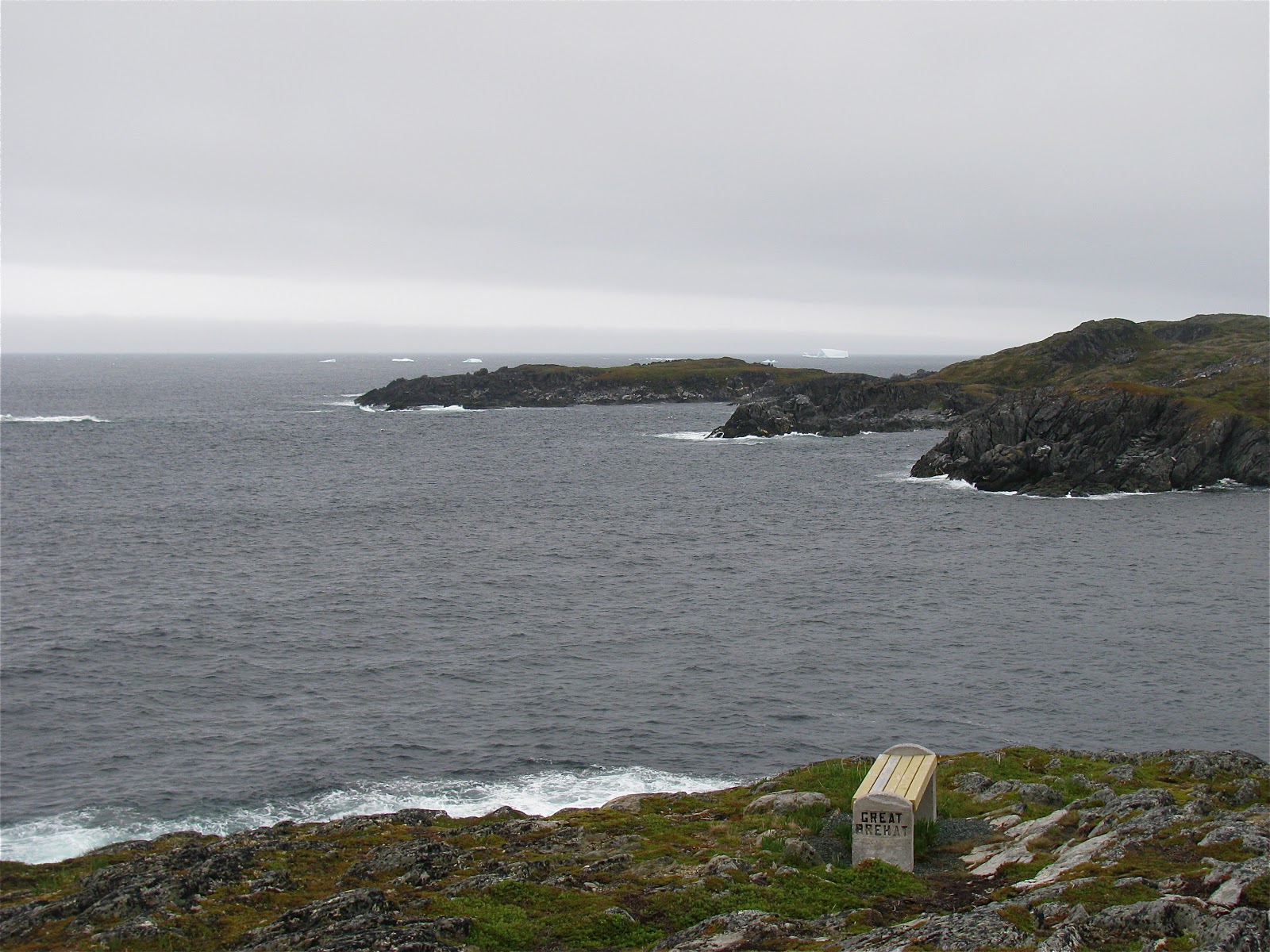 It is hard to imagine what it is like to live in an outport like Great Brehat.  The community is no longer as isolated as it was, and the memories of what it was like is passing.  Kathleen Tucker, a researcher, published a project recently, St. Anthony Basin Resources Inc. Oral History Project 2009, to preserve some of the stories of Great Brehat and fifteen other communities in northern Newfoundland.  Life was hard in earlier days.  In the oral history project Ron Cull recalls the work of his mother and other women in Great Brehat:

"I could write a book about my mother. She worked just like a slave: in the garden, on the flake, in the stage, making hay. She used the old scrubbing board; no washer then.The line of diapers reached from here to there, about a hundred feet long. I wonder when she got the time to do her own work; women was like slaves. The men would come up from the stage and lie down on the daybed and have a nap, but Mother’s work had just begun, working over an old woodstove then. My father would be lying on the daybed and he’d say, “Keep the youngsters quiet,” so he could sleep. She might have her hands in the dough making bread when he’d say that. Or, me and Dad would have a lie down and Mother would be out in the garden weeding her plants."

If you would like to read more about Great Brehat in this time click on Oral History. 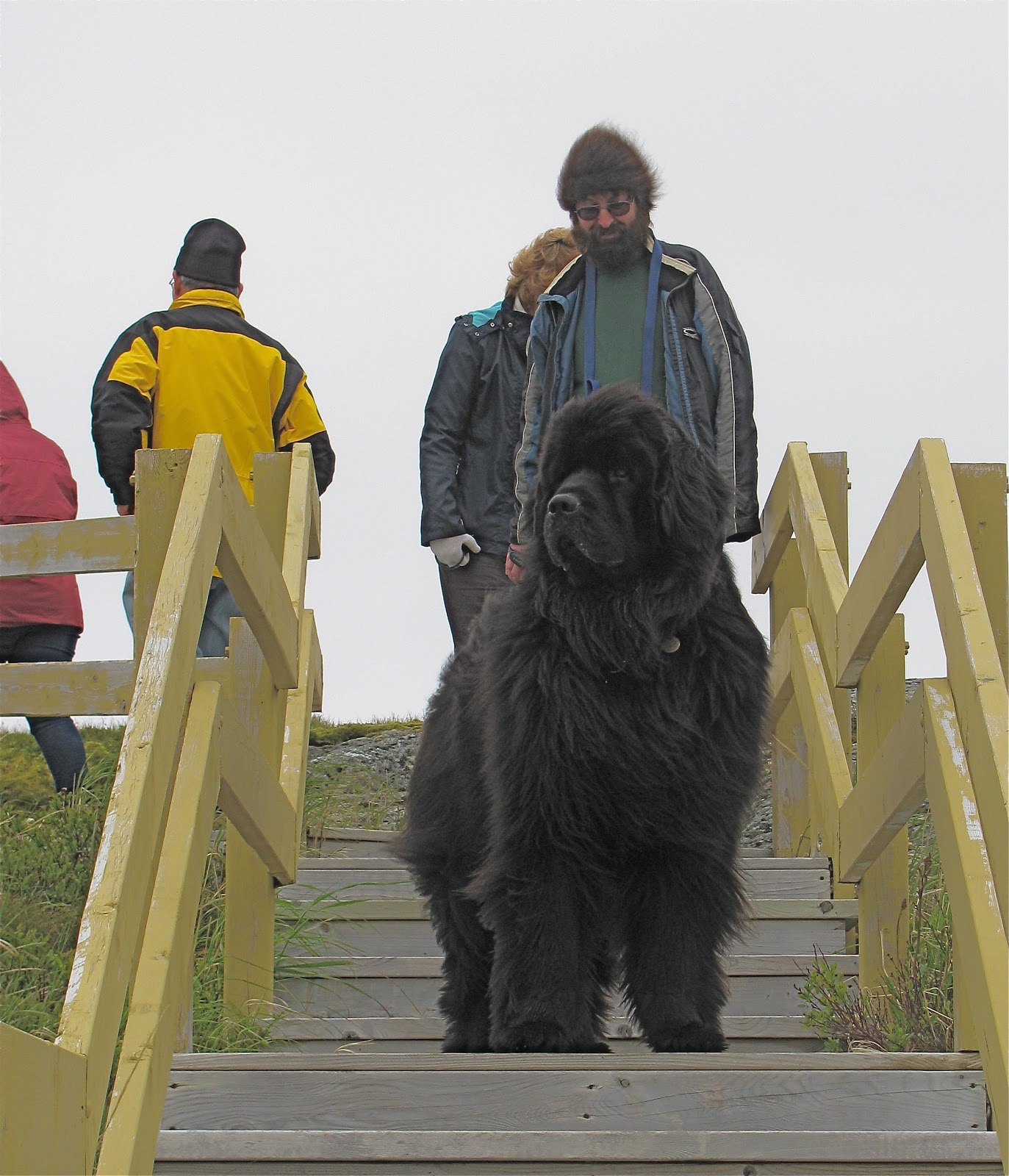 A Newfie Icon Joins Us in Great Brehat

On the way back to our cabin near L'Anse aux Meadows, we spotted another Newfie icon, a symbol of the enduring and practical spirit of Newfoundlanders:
a sheltered garden dug back from the shore: 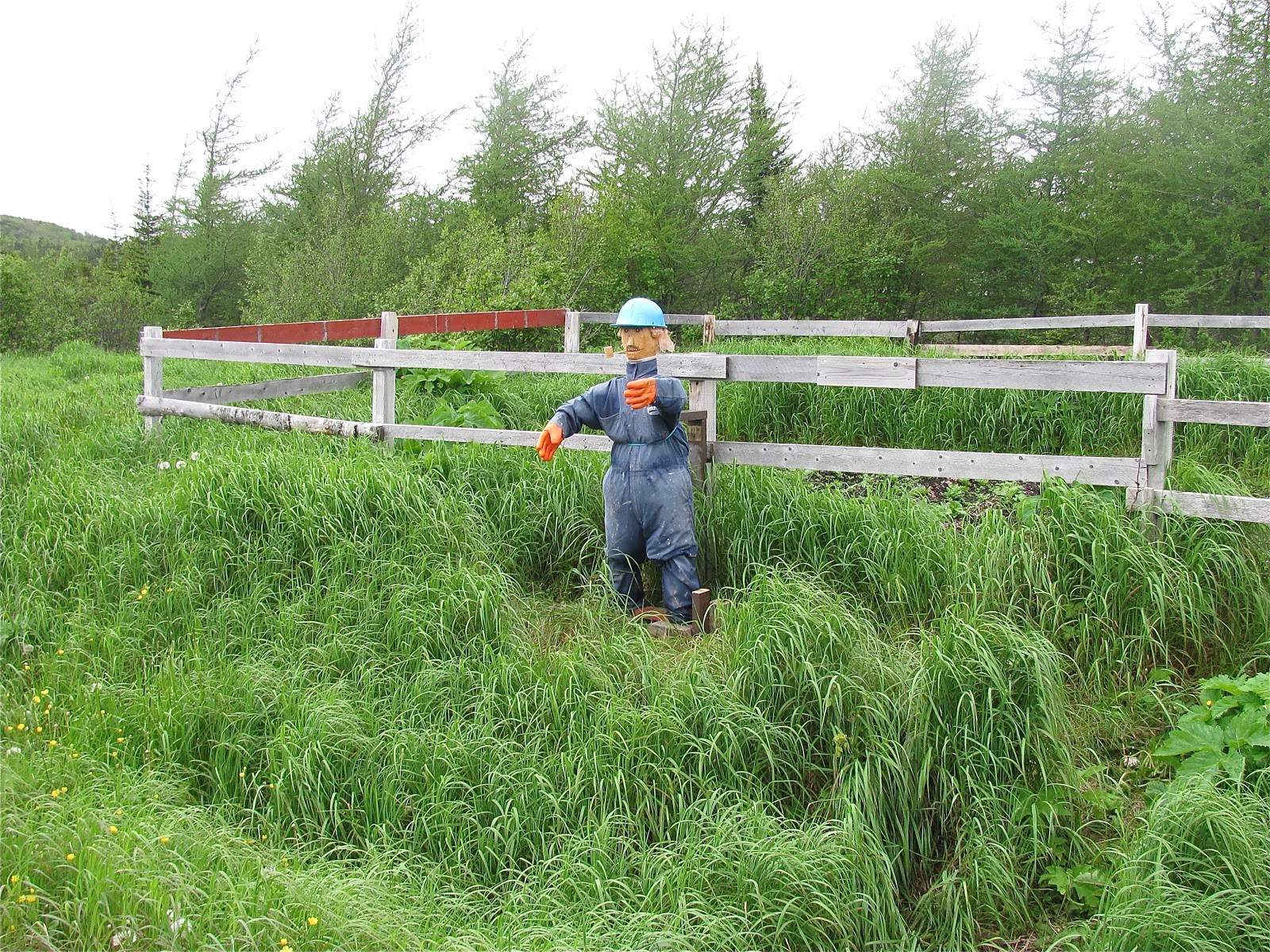 I may never have expected to go to Great Brehat,
but now that I have, I hope to return sooner rather than later.

Here are some links to my other Iceberg Alley posts from the summer of 2011:

"The service we render to others
is really the rent we pay
for our room on this earth.
It is obvious that man is himself a traveler;
that the purpose of this world is
not 'to have and to hold'
but 'to give and serve.'
There can be no other meaning."

Words attributed to Sir Wilfred Thomason Grenfell
Posted by Fundy Blue at 9:48 AM