I'm especially thinking of all my wonderful blogging friends.
The biggest delight of blogging for me is the friendship
of these amazing, kind, and supportive bloggers.

I hope that you and your loved ones are enjoying
a lovely time this beautiful Christmas Day!

Terry and I are up in Breckenridge, Colorado,
with Terry's sister, Noreen, her husband Cathal,
their sons Kevin and Conor, and their
daughter Deirdre and her new husband Will.
It is peaceful here in Breckenridge,
with lots of snow piled up
and a light dust of powder drifting down.

On this Christmas day I thought I would share two things.
The first is a photo of Santa Claus arriving
in Lansdowne House for a special Christmas party
Dad held for his Indian children at his school.

It was a brilliant sunny day in Lansdowne House,
the kind that makes your eyes hurt
if you look at the snow too long.
And at a frigid 30º below Fahrenheit (-34º C),
the snow squeaked when you walked on it.

Somehow the cold rarely mattered in the sunshine;
although, pilots had to cover their ski planes
to keep the engines from freezing up. 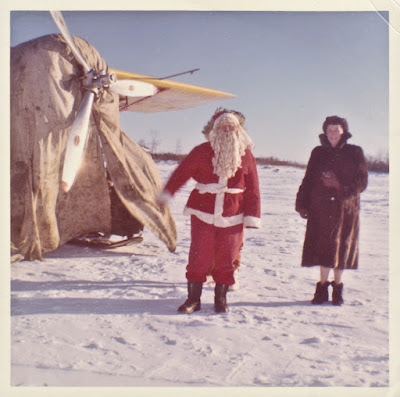 The second thing I'm sharing is my favorite Christmas hymn,
the Huron Carol, the first carol written in Canada,
in North America for that matter. 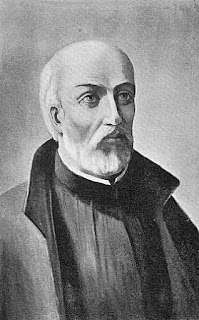 It was written by Father John de Brébeuf
during his time as a Jesuit missionary
to the Huron Indians from 1626 to 1649.


Martyr and Apostle of the Hurons
Wikipedia

The Huron and Iroquois nations were at war
during the mid-seventeenth century starting in 1642.
The Iroquois attacked his Huron mission,
and after brutally torturing Father de Brébeuf,
they burned him at the stake.

Escaping Hurons saved the words to his carol,
and Father Étienne de Villeneuve recorded them.
The carol was found among de Villeneuve's
papers after his death in 1794. 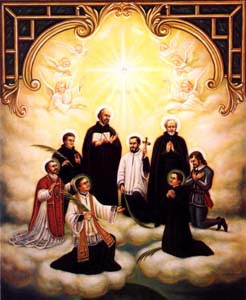 The Roman Catholic Church beatified
Father John de Brébeuf in 1925
and canonized him as a saint in 1930.
Seven other Jesuit missionaries were canonized with him.


I first heard this haunting carol
when my family went North in early 1961.
From that moment it was my favorite
and remains so today.

The carol is an example of inculturalization.
Early missionaries in Canada used the cultural idioms
of the Indians to teach them about Christianity.
It was my observation in Lansdowne House
that priests and ministers still used inculturalization.
Adoremus

Here is a recording of Huron Carol by the Canadian Tenors:


And here are the complete lyrics to this beautiful Canadian carol.
I have chosen the 1926 English version by Jesse Edgar Middleton.

'Twas in the moon of winter-time
When all the birds had fled,
That mighty Gitchi Manitou
Sent angel choirs instead;
Before their light the stars grew dim,
And wandering hunters heard the hymn:
"Jesus your King is born, Jesus is born,
In excelsis gloria."

Within a lodge of broken bark
The tender Babe was found,
A ragged robe of rabbit skin
Enwrapp'd His beauty round;
But as the hunter braves drew nigh,
The angel song rang loud and high...
"Jesus your King is born, Jesus is born,
In excelsis gloria."

The earliest moon of wintertime
Is not so round and fair
As was the ring of glory
On the helpless infant there.
The chiefs from far before him knelt
With gifts of fox and beaver pelt.
Jesus your King is born, Jesus is born,
In excelsis gloria.

O children of the forest free,
O sons of Manitou,
The Holy Child of earth and heaven
Is born today for you.
Come kneel before the radiant Boy
Who brings you beauty, peace and joy.
"Jesus your King is born, Jesus is born,


I will be back with my regular Lansdowne Letter posts
on New Year's Day.
Enjoy the rest of your holiday season. 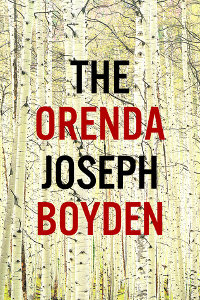 Note:
1.  Joseph Boyden, a Canadian author, wrote The Orenda.
It is an historical novel that takes place in Canada
during the last days of the Huron Confederacy
in the early to mid seventeenth century.
One of its three narrators is a French Jesuit
missionary priest named Christophe.
Christophe's character is based on Father John de Brébeuf.