During freeze-up in Northern Ontario a half century ago,
people in the scattered and remote communities
hunkered down and waited for the ice to thicken
on the countless lakes in the land of beautiful waters. 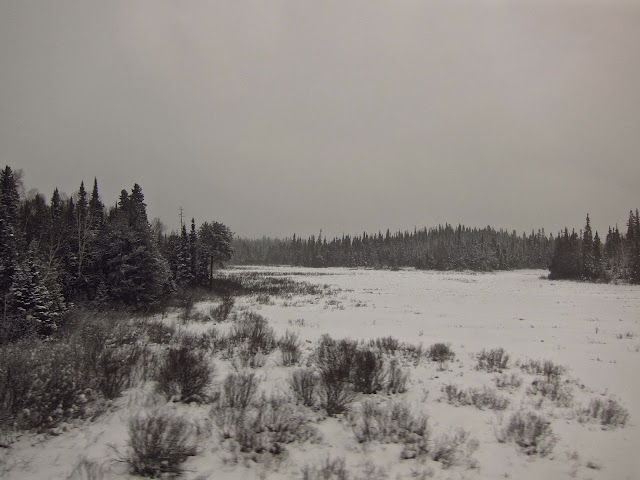 Some wrote letters during this difficult time
and waited for the day when the ski planes could land
bringing welcome mail and flying their accumulated letters out.

My father was not writing a stockpile of letters to fly out
when the first plane broke Lansdowne House's profound isolation.
He was busy dealing with other things.
The loneliness of the subarctic boreal forest,
magnified by the lack of communication with the Outside,
drove my father to a life-changing decision for our family.

My mother and we five children in rural Nova Scotia
had no inkling of what my father was thinking and doing,
cutoff as we were from all news from the North.

My mother struggled with the same heartache
and loneliness of separation that my father faced,
a fact that Mom, being Mom, protected us from.
As late November stretched into December
she calmly sorted through our daily mail
hiding her increasing hope and then increasing disappointment
when Dad's distinctive handwriting didn't appear
scrawled across an envelope in the pile.

My first tangible clue of what was to come
arrived in a letter from my father's friend Maureen McRae.
When it appeared after its long journey from the northern bush,
it shook up our sheltered, ordinary lives
and filled romantic me with excitement. 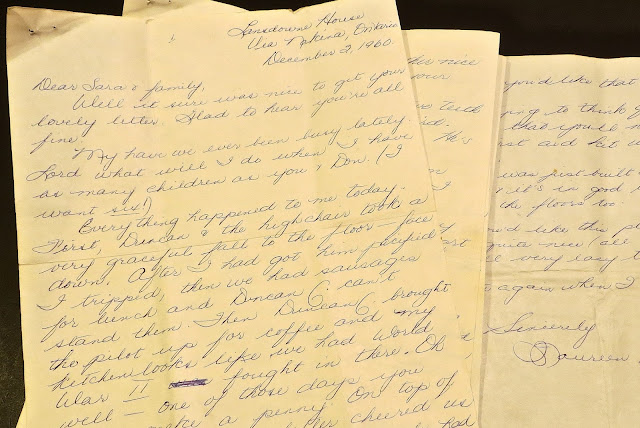 Dear Sara and Family,
Well it sure was nice to get your lovely letter.
Glad to hear you’re all fine.

My have we ever been busy lately.
Lord what will I do when I have as many children as you and Don. (I want six). 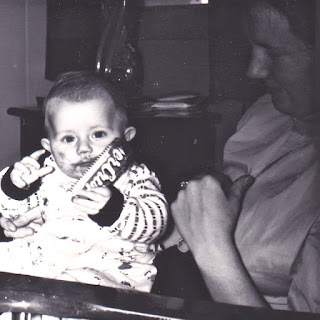 Everything happened to me today.
First Duncan and the highchair
took a very graceful fall
to the floor – face down.

After I had got him pacified, I tripped,
then we had sausages for lunch and Duncan C. can’t stand them.

Then Duncan C. brought the pilot up for coffee,
and my kitchen looks like we had World War II fought in there.
Oh well – one of those days you can’t make a penny.

On top of that my mum’s letter cheered us us immensely –
Duncan’s Uncle Rod had died and another aunt is in the hospital.
So it was rather nice to receive the pictures and your cheery letter.

Well baby Duncan has two teeth now and is starting on his third.
We sure are pleased with him.
He is more fun than a picnic.

I know Christmas will seem awfully lonely without Don.
I understand cause Duncan and I celebrated
our first anniversary about five hundred miles apart.
I had to go out to Winnipeg to have baby Duncan.

When I was out friends of my mother’s
were constantly saying that I was such a poor dear,
and so brave being so many miles from civilization.
But I love it, and I’m sure you will too. 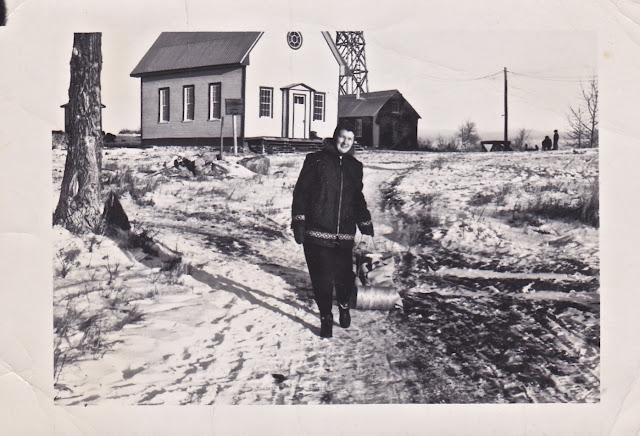 Don was over yesterday, Sara, and he’s very lonely.
Not that I blame him.
I would have been climbing the walls by now if I were him.

Nothing beats having your family with you – your wife especially.
So he said he was writing to ask you
if you and your brood would come up in January.

We certainly would love to see you come up here.
You would be staying in the Forestry house –
It is small, but I’m sure you could manage.
You would have a propane stove to cook on,
and there is lots of cupboard space in the kitchen. 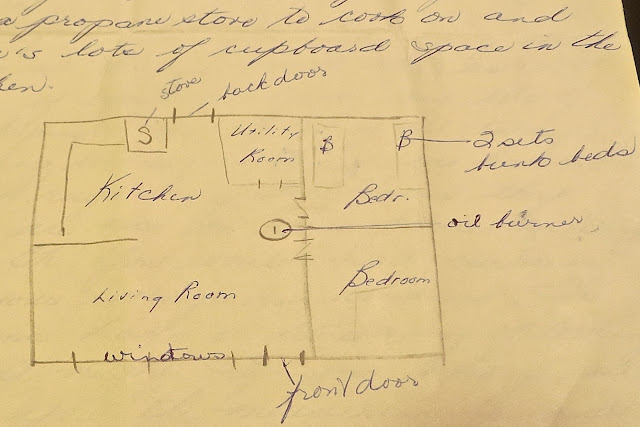 
Your front room windows would give you a lovely view
of the lake when spring comes,
and I’m sure you wouldn’t miss the ocean that much
when there’s such a lovely lake out front. 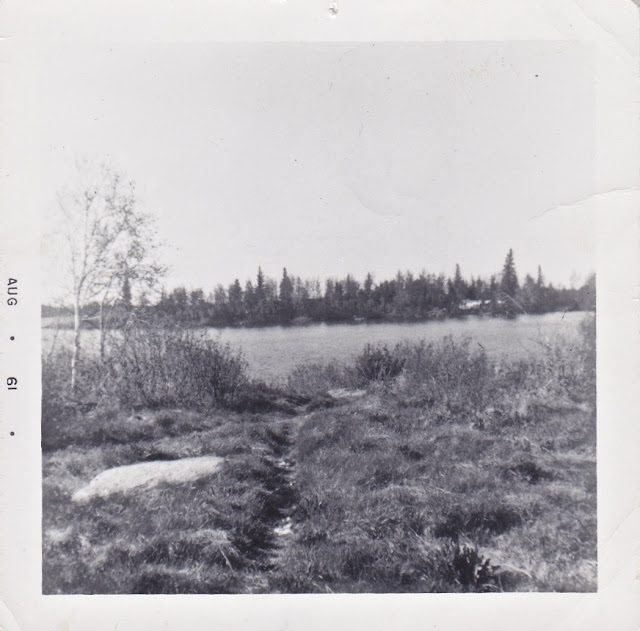 Now in the way of clothes,
I brought everything with me except my formals.
It is so nice to have a good dress to put on to brighten you up.
For winter as long as the kids have warm boots
and snow outfits they’ll be warm.

If I were you, I’d bring your personal things, knicknacks,
an extra tube of lipstck, your iron, lots of clothespins
(I can’t spell at all today), bedding, linens, and such.
If you have some scatter rugs, bring them cause
they sure are nice on these floors.  They’re chilly.

Oh!  You would need curtains for your livingroom windows.
The Indians have a tendancy of looking in at night.
If you like, I could send you the measurements
and you could make them.
Mine are dark cloth, anything would be fine
as long as you can’t see through them.

If you come, we would be getting the drier right away so that would help.
We’re seeing about a propane gas one right now.

The girls could sleep on the bunkbeds in one bedroom,
and Roy could sleep on the davenport in the living room
I don’t think he’d mind.  My brother did it for years.
He’d sleep in mum and dad’s bed until company left,
and then Dad would carry or walk him into his bed.

There are good-sized closets in the bedrooms, so that would come in handy.
The utility room could be used as a combination washroom and bathroom.
The oil burner would keep the house real warm.

We sure hope you’ll come.  I’m sure you could manage,
and I’ll gladly give you a hand when you move in if you’d like that.
Oh please come!

Now I’m trying to think of more things to bring that you’ll need.
Oh, a small first aid kit will come in handy.

Also the house was just built a year and a half ago,
and it’s in good condition.  There’s tiles for the floor too.

I’m sure you’d like this place.
The women are quite nice (all four of us),
and we’re all very easy to get along with.
I’ll write again when I think of other things.
Sincerely,
Maureen


Well!  You can imagine the excitement this letter caused!
I had a very different reaction from my mother, I'm sure.
I was headed into the North, into the wilderness!
My siblings and I were going to be the only white children,
except for three small babies.
I was going to go to school with real Indians!
Not that our local Mi'kmaq weren't real Indians,
but they were, well, ordinary Nova Scotians.

My mother was reading between the lines of Maureen's letter:
a tiny house with no electricity or running water,
and the "bathroom" was a chemical toilet
that had to be dumped daily in the community repository.
Perhaps she hadn't realized what the "bathroom" was yet,
but she certainly understood the challenges of
taking five young children into the northern bush
and of the work required on her part to make it happen.


Some women would have
quailed at the thought,
and perhaps Mom did briefly,
but she had the heart of an adventurer,
and as much as I longed
to experience the North,
she longed to every bit as much and more. 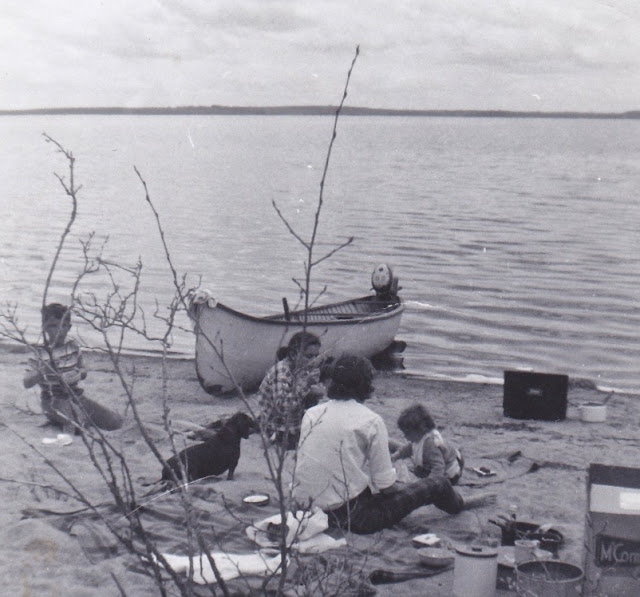 A Hint of Things to Come
On the Shores of Lake Attawapiskat
Roy, Gretchen (dachshund), Me (Louise), Mom (Sara) and Bertie
Photo by Don MacBeath
© M. Louise (MacBeath) Barbour/Fundy Blue
All Rights Reserved

TLL: Heading for the Winter Traplines


Notes:
1.  The McRaes:
Duncan C. worked for the Department of Transport,
and his duties included running the DOT Weather Station.
He and his wife Maureen were staunch friends of my father.

2.  Land of Beautiful Waters:
"Ontario" is a corruption of the Iroquois word Onitariio, meaning beautiful lake,
or Kanadario, variously translated as beautiful water.
Ontario has some 250,000 lakes and over 100,000 kilometres (62,000 mi) of rivers.  Wikipedia
The myriad of lakes in Northern Ontario is the most distinctive feature of the Boreal Shield.
To me, the area around Lansdowne House seemed more water than land. 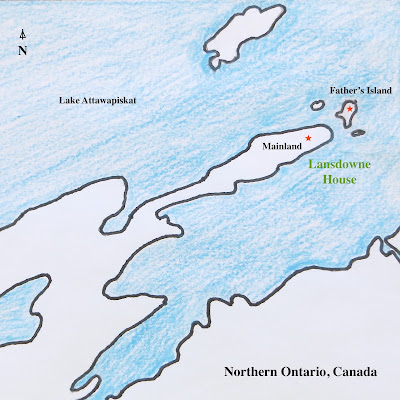