My apologies to my family and friends
for my unanticipated hiatus from blogging,
but I'm back now to pick up the narrative
of my family's time in the North.

At that point my father was cut off from the Outside
anxiously waiting out freeze-up
in the remote wilderness of Northern Ontario
while my mother was fighting through
loneliness and isolation in rural Nova Scotia. 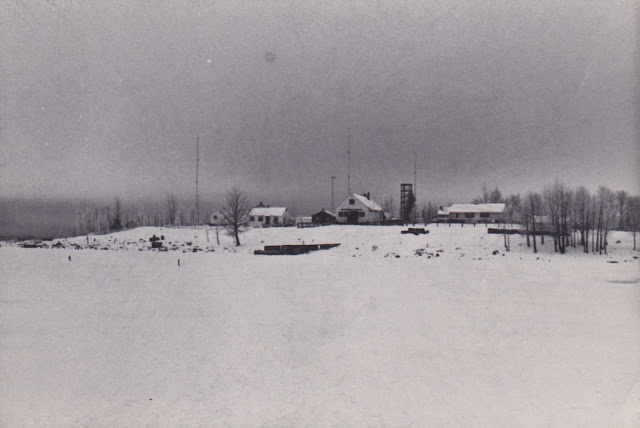 Unable to communicate with her husband,
my mother was alone with five young children.
living in her mother's home,
and struggling with little money and poor health.

My mother persisted,
and I often wonder how on Earth she did it.
Cheerful and resilient, she kept her worries inside.

With Christmas coming in less than three weeks,
my mother tried to firm up plans
for her mother-in-law's impending visit.

What a different time it was!
Everything had to be worked out
through letters passing back and forth
between Smith's Cove, Nova Scotia
and Charlottetown, Prince Edward Island.
Money was as scarce as hen's teeth,
so a long distance phone call was only for emergencies.
Even stamps were used prudently. 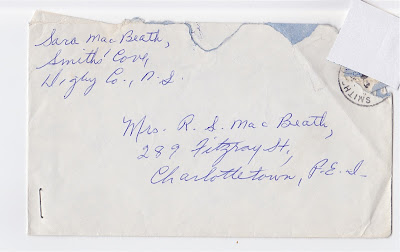 On Thursday, December 8, 1960
my mother wrote to her mother-in-law Myrtle MacBeath:

Dear Mother:
This is going to be a fast letter for it is late.
I haven’t written because Roberta was very sick with the flu.
I was just going to get the doctor
when I realized that she was finally getting better.
It made a lot of extra laundry, blankets, etc.,
and it is so hard to dry things now. 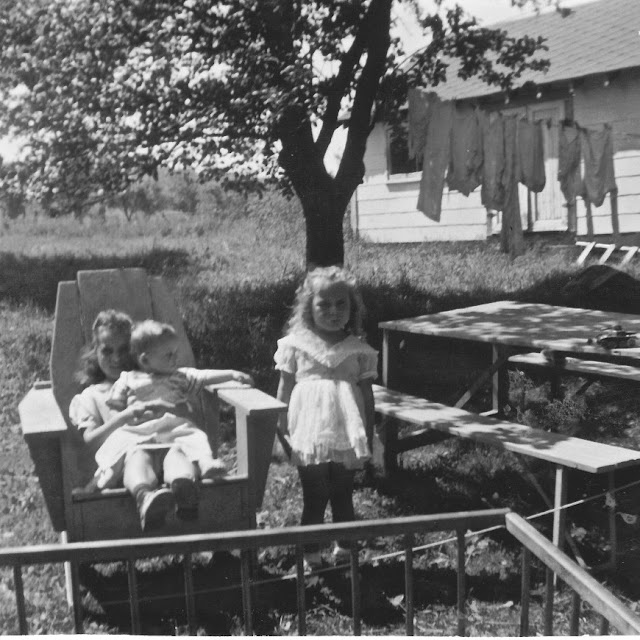 
We have been as warm as bugs in a rug,
but now that it has turned cold,
I realized I had better warn you to bring warm things
for your legs and shoulders.

If you could bring a pair of flannelette blankets,
I wish you would, for I gave Don most of ours.
I can borrow anything I need from Aunt Nan,
but I doubt that she would have flannelette sheets.
I could get ordinary ones from her, so let me know
whether you will have room to bring any or not.

Kelsey and Mary Lou are going
to Mary Lou’s home for Christmas.
I had forgotten when I wrote you.
However, Mrs. Robinson or her son will pick you up.
Your train arrives here at 11 o’clock. 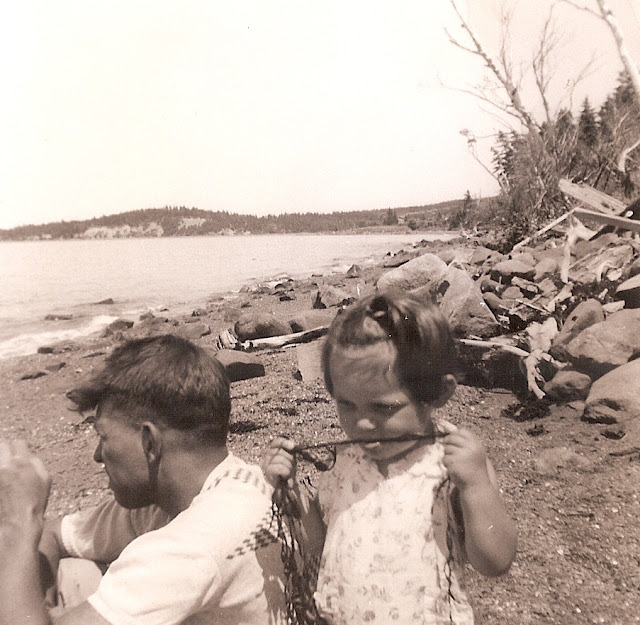 
Mrs. Robinson's son would drive you here
and back to Halifax for $10.00 return.
He brings another woman with him I believe.

However, I told Mrs. Robinson that you might be nervous about driving,
and I would worry about you if you came by road.
Also there might be a snowstorm.
However, if you wish you could come with him.

If you did, you would go back with him on a Sunday.
I don’t know what time they leave,
but I could find out for you if you are interested.

He has a nice new car and is about nineteen or twenty.
He takes a number of people from the Cove and is a very nice boy.
But as I said I would feet safer if you are on the train.

I had decided to let you have the room Louise and I are using,
and Louise would sleep with Barbie and I with Roy.
The way he sleeps, he wouldn’t even know I was there,
and it would please him.

However I begin to wonder if you would be better downstairs where it is heated,
but that would leave another problem.

There is only one solid wall away from the windows.
Unless there is a wind blowing from the north this wouldn’t bother you.
We could move the couch in the dining room for you.
I am going to put one there for Christmas to give us more room anyway.
Where do you think you would be the most comfortable?
Of course we could arrange things differently after you arrive.

I can’t think of anything else.
I have been trying to get things fixed up for you,
but with the children sick, especially the baby,
things have gotten beyond me. 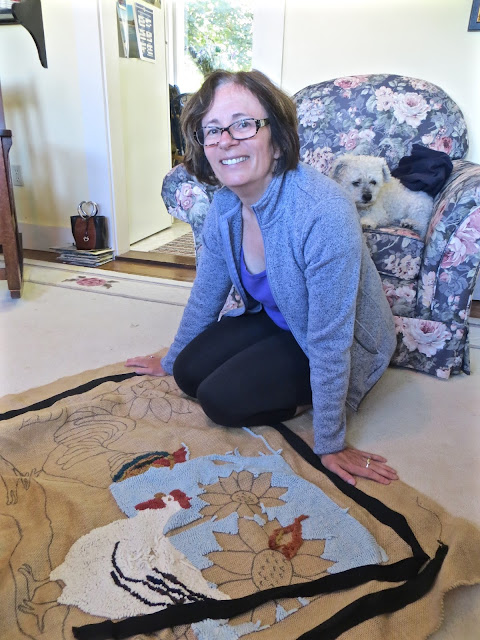 However Mrs. Robinson’s daughter is coming in to help me
Saturday, and if all goes well, I will be able to get her regularly.

There is so much for me to get caught up with,
though I hope you won’t mind
if things are not as nice as I would like to have them.

I made cranberry jelly Wednesday.
Tomorrow I will make the puddings, the cake Monday,
a quick fruitcake on Tuesday.
Stella is making me some nice mince pies,
cookies, and doughnuts,
so don’t bother to bring any.

There doesn’t seem to be anything else that I can think of.
There are two places in the dining room that we could put a couch
if you would like to be by the heat.
It’s below zero tonight,
and the first time I have had the furnace on all day.
I have been paying about $10 - $15 a month for oil,
a lot different from Margarettesville.


So many changes have occurred since then.
No more doctors making house calls
nor hanging bedding out to dry on the clothesline in the winter.
No doubling up and sharing beds.

No trace of the Robinson's home just a dash away,
only warm memories of childhood fun
with their younger son Wayne, my brother, and me
all over the woods, the pastures, and the shore.

Drivers still take people to and from Halifax,
but guaranteed not for $10 round trip;
and the newer Trans-Canada Highway is much faster
than the torturous old road that wound
through endless villages and towns in the Annapolis Valley.

The Dominion Atlantic Railway train
and the Bear River Station are long gone,
and the Bear River Railroad Bridge (photo) came down in 2012.
My grandfather Jack MacDonald helped build that bridge (photo);
it's the reason I'm here.
He'd dive off the bridge to retrieve dropped tools
and then get time off to court my grandmother. 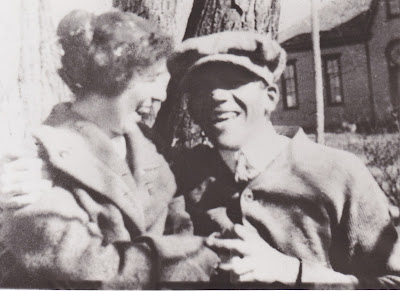 Ella and Jack
Young and In Love
circa 1912
© M. Louise (MacBeath) Barbour/Fundy Blue
All Rights Reserved 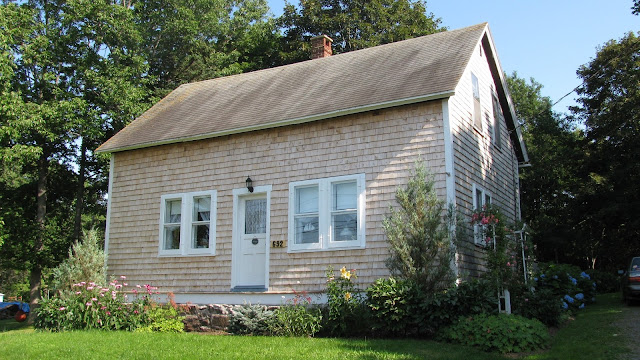 The House That Jack Built
It sheltered my family many times over the years.
© M. Louise (MacBeath) Barbour/Fundy Blue
All Rights Reserved


Sometimes the most ordinary words in an everyday letter
flood me with bittersweet memories,
especially of those I love who are gone.

Every family has its stories,
and I believe those stories are important.
Is someone in your family saving yours?
I hope so!

TLL: Back into Circulation