The Lansdowne Letters: Another Crisis in the MacBeath Home


Another crisis hit my parents in the spring of 1961,
but at least this one could be contained and resolved. 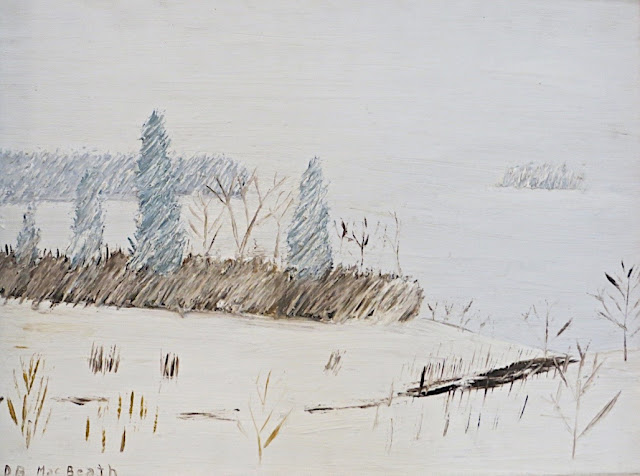 Hello Everybody:
Thanks goodness that we were snowed in today,
or I would never have gotten this off this week.
Last night (mail night) was my birthday,
and Duncan and Maureen came over to help me to celebrate the occasion.

Duncan and I gave the distaff sides of the two partnerships
a terrible trimming at bridge.  We beat them by about 2200 points. 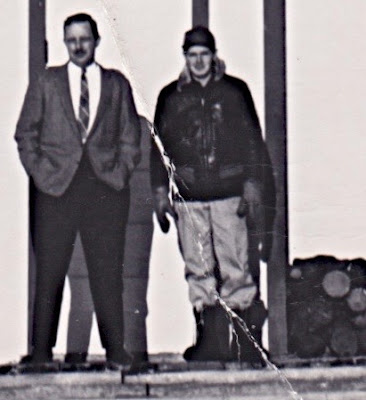 
I have been sitting on pins and needles waiting to hear
from Ottawa regarding that position in Sioux Lookout.
I don’t imagine I have a hope in Hades of getting it,
but a fellow can hope.

Actually, in spite of my pessimistic pronouncements
on the subject, I am quite hopeful.
I can’t imagine they would have written to me regarding it,
if they hadn’t been giving me, or my name, some consideration.
It would sure be wonderful I did get it.

Sara has gained another five pounds and has now reached 110 pounds
for a total gain of 15 pounds since she came north.
She is looking better every day, although the faint possibility,
which I thought was so preposterous when she first arrived,
that of having to get her a girdle,
doesn’t seem nearly so preposterous now.

She is threatening to go on a diet now.  The very idea!!!!!
She hasn’t looked so good or so healthy in a long time.
I have hopes of getting her up to at least 120 pounds by spring. 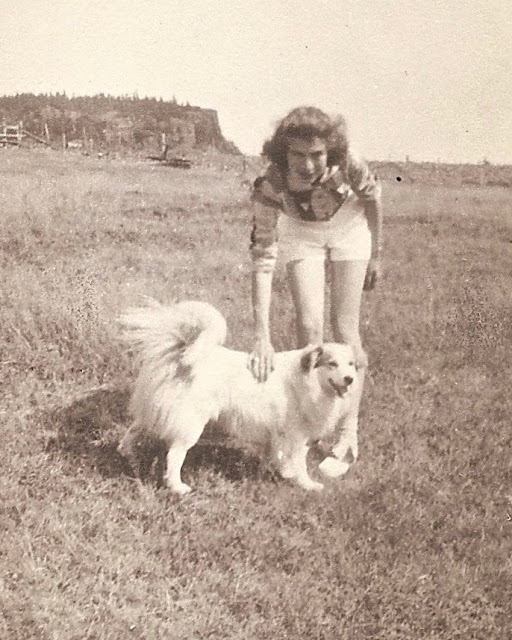 
In the previous paragraph I used the phrase
“before spring,” because it is still very much winter up here.
In the last ten days or so we have had a couple of bad blizzards
and a real bad ice and sleet storm.

Also, the night before last, Lansdowne House received some fleeting notoriety.
We had the dubious honour of being the coldest place in Canada--17 below.

Right now Sara is making like a chartered accountant
and is trying to get her account books in order.
I can’t help her, for I am afraid that her mathematics
are too devious for a mere man like me to follow.

I must give her credit though, for after a series
of darns, gosh darns, and oh damns,
she always manages to get everything to balance.

We are facing a crisis right now, that of an Easter Eggless Easter,
but I imagine we will weather it by substituting chocolate bars and other forms of candy.
We still have not become completely accustomed to the northern method
of ordering everything like this months in advance. 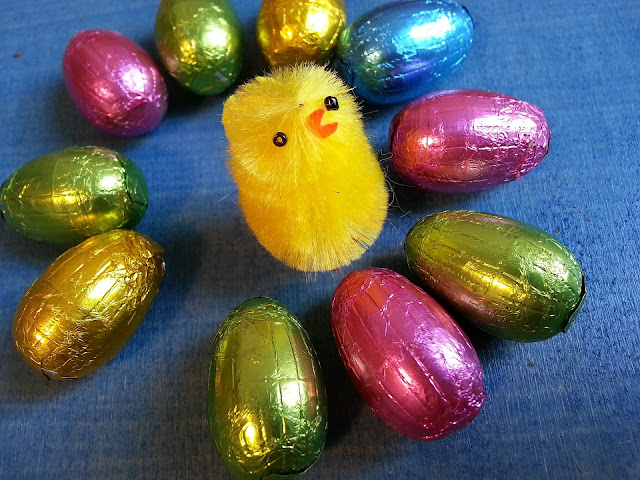 
Tomorrow night the Mitchells are coming over for bridge.
I am looking forward to a beating then, for Sara and Bill always play Rhea and me,
and while they seem to click like they had been playing together for twenty years,
Rhea and I have yet to reconcile our different systems of playing and bidding.
If it is possible at all for us to misconstrue each other’s bids, we do it.

I was just thinking how amazing it is that two people can view
the same situation and experience such different emotional reactions.
For example the Easter holidays have started, and while I am positively delighted
that I am able to stay home from school for the next ten days,
Sara is utterly appalled at the prospects of having
the four children home for the next ten days. 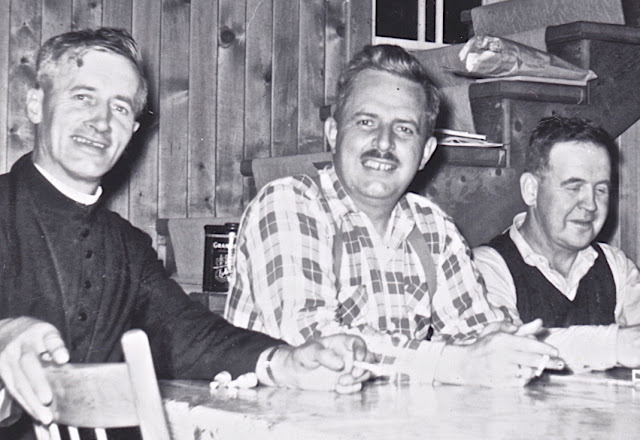 
Sara is now reading back issues of The Guardian.
I just heard her exclaim with surprise that Liz Taylor was sick.
She just asked me if Liz had died.

Now she has just discovered that George Formby had died.
Nothing like being up to date on the news, eh.

The aerial for our radio just arrived,
and Duncan is coming over to help me put it up the first fine day.
Then Sara ought to be able to keep up with the news with more success.

Well, I have just about dried up as a source of news for this week,
so I’ll let Sara get in a few licks and close out this week’s letter for me. 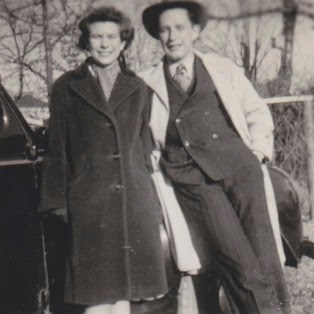 
My mother added to my father's letter:

Hello Everybody:
I am also reading the Contract Bridge Section in the papers,
so I can disappoint Don when we play with the Father and Brother.

There isn’t much more that I can think to say
except that I hope you are all well
and that the Easter Bunny is good to each and every one of you. 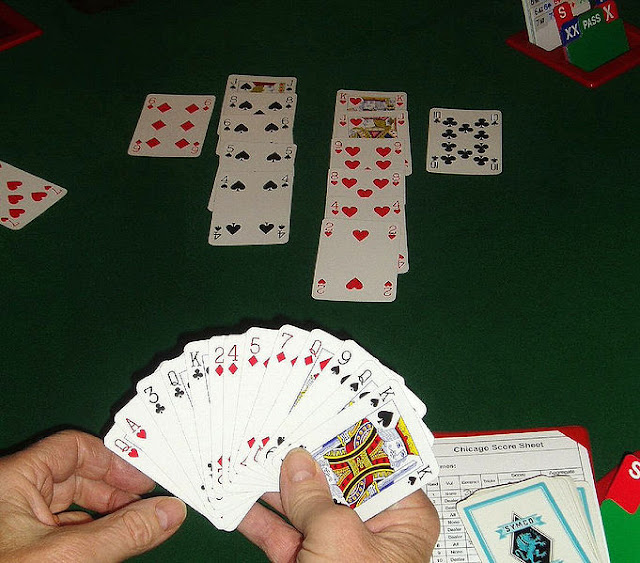 
My father had a childish delight in Easter.
I'd like to say it was all about the Christian celebration of Easter,
but it wasn't.  It was all about him hiding eggs as the Easter Bunny.

There were always treats that were almost impossible to find.
He divided whatever house we were living in into sections for each of us to search,
and he adjusted the difficulty of the hiding places according to our abilities.

We didn't have Easter baskets filled with goodies like our American cousins did.
We had to hunt down every egg and other items, one by one.

We earned our booty,
especially as our father had a streak of devilment in him that surfaced every Easter.


I can still hear my father going from area to area
and helping his perplexed kids with an encouraging,
"You're getting hotter, hotter."
Or "colder, colder."

Like I was going to find the egg
replacing a battery in his electric razor
or the egg hidden in hollowed out slices
in the middle of a loaf of bread
without his, "You're hot!  You're burning hot!"

Meanwhile our mother was also helping us, going from area to area.
She had assisted my father hiding the Easter eggs the night before.
He had spent hours at it, laughing with delight as he went about his bunny duties,
especially whenever he found a really original hiding place.

Dad was driven by the theory that since we kids had waited so long with such excitement
that he should make the fun last as long as possible.

Mom, taking pity on us, would nod toward a hiding place
with a slight tilt of her head or a subtle point with a finger.

I can still remember, as second grader,
searching our living room in Alymer, Ontario.
The very first things I found were two fluffy chicks
and a marshmallow egg underneath the edge of the chesterfield.
The thrill of spotting those yellow chicks
shot down through my body right to my toes:
The Easter Bunny had really come!

As much as hunting down those eggs frustrated me at times,
I'd dearly love to have Dad hide a few for me next Easter.
How we all loved those Easters!

Duncan worked for the Department of Transport, and one of his duties was running the weather
station in Lansdowne House.  He and his wife Maureen were good friends with my parents.
3.  My Mother's Health:
My mother had Grave's Disease, an autoimmune disorder that causes hyperthyroidism or overproduction of
thyroid hormones.  Four years previously my mother had had an operation to remove her thyroid.  Unfortunately
her parathyroid glands were accidentally removed also.  She struggled throughout her life to keep weight on.
Grave's Disease also impacted my mother's vision.

7.  Bill and Rhea Mitchell:
Bill was the manager of the Hudson's Bay Post in Lansdowne House and married to Rhea.

8.  Father Ouimet and Brother Bernier:
They were members of the Missionary Oblates of Mary Immaculate,
a missionary religious congregation in the Roman Catholic Church.

9.  The Guardian:  Newspaper published in Charlottetown, Prince Edward Island since the 1870s.  Wikipedia 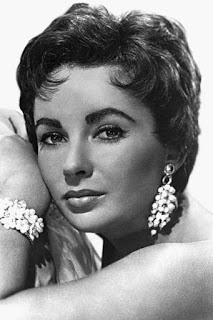 "Dame Elizabeth Rosemond Taylor, DBE (February 27, 1932 – March
23, 2011) was a British American actress, businesswoman, and
humanitarian. She began as a child actress in the early 1940s, and was
one of the most popular stars of classical Hollywood cinema in the
1950s." 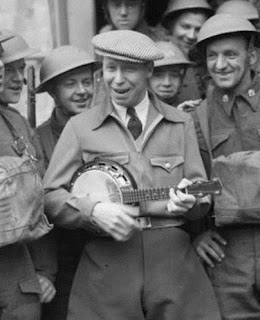