As long as I live I will remember my mother's sudden stop
outside the cabin in Lac Seul that was our unexpected new home,
and her tired, baffled question,
"Why is all that heavy wire nailed over the windows?"

Nor will I forget Fritz's answer, "To keep the bears out."

I think that was the lowest point for my mother in a very long time.
Her shoulders sagged, and then she squared them and walked into the tiny cabin,
a shouldering of determination I have seen her do at difficult times in her life. 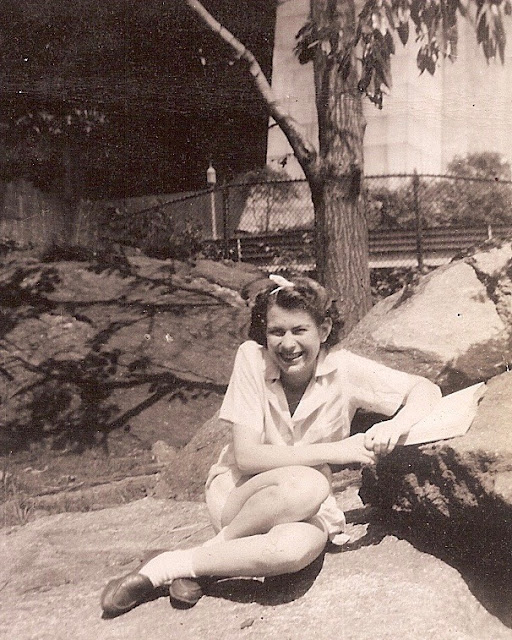 
The "Boys" set our suitcases in the middle of the front room.
Fritz showed us around,
while John grabbed two buckets and went to the lake get us water.

Across the narrow room a door led to the biggest room in the cabin,
a bedroom with an iron bunk bed, a double bed, and a crib
lined up along the back wall of the cabin.
The crib tucked under the one wire-covered window on the far left side of the room.
Unlike the living room, the walls were unfinished.
The logs of the cabin were nailed to the backs of visible studs,
and the gaps between the logs were filled with a mortar-like chinking.

There was no debating who had the crib (Bertie)
and who shared the double bed (Donnie and Barbie).
Roy and I shared the bunk bed.
I have no memory of how I won out with the top bunk;
but I did, and I had it the entire summer.

Roy sometimes kicked the bottom of my bunk out of sheer devilment,
but I had the perfect object for revenge:
a small, scraggily wolfskin with yellow glass eyes
that I bought for 25¢ at the Hudson's Bay early on in our Lac Seul sojourn.

I'd dangle that wolfskin by its tail from the top bunk in the dark of the night,
carefully move the body over sleeping Roy's face,
and tickle his nose with the wolf's cold one.
When he woke with a scream, I'd yank it back and stuff it under my blankets.
Revenge can be so satisfying. 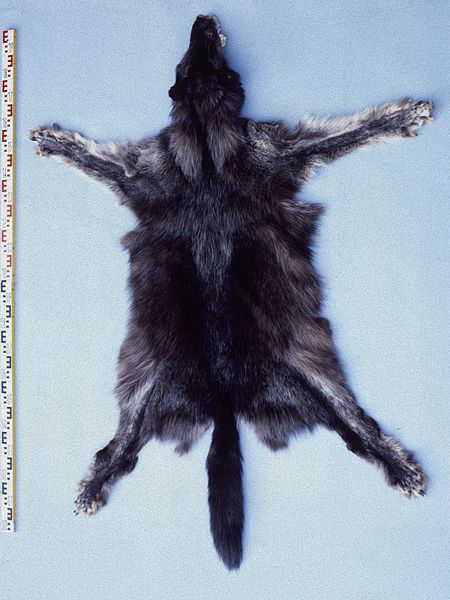 
The last room was the kitchen, which we entered from the front room.
A cast iron wood stove stood to the left of the door
and a large kitchen table with chairs to the right.
A back door beyond the table led outside.
Upper cupboards and lower cupboards with a countertop lined the end wall of the cabin.
Windows on three sides made the kitchen the brightest in our three roomed-cabin.

Our one source of light was a hurricane lamp
which Fritz had showed Mom how to light by the time John returned with water.

The Boys left and took with them all the excitement of a wild day.
Here we were, but we didn't know where,
just a cabin in the bush somewhere out of Sioux by plane and boat. 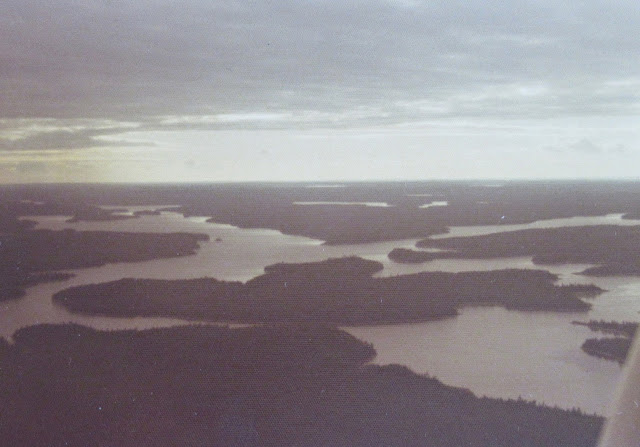 My mother slapped together some peanut butter and jelly sandwiches
while I mixed a pitcher of Kool-Aid.
Then she made up five beds while we ate our cold supper.
My younger sisters were practically falling asleep over their plates,
slowly biting and chewing their sandwiches
and sipping their Kool-Aid without a word.

As soon as my mother had Bertie in her crib,
she shepherded a cranky Donnie and Barbie to and from the outhouse.
It stood a hundred feet or so up the gentle slope from the kitchen door,
a short walk on a rough path.

My younger sisters were none too thrilled about sharing
a smelly, two-holed outhouse buzzing with flies.
Fortunately it had a roll of toilet paper and a flyswatter.

With Donnie and Barbie tucked in for the night,
Mom ordered Roy and me to bed early;
and, one by one, we made our reluctant trips up the hill to the outhouse,
grumbling that we had to go to bed before sunset.

A knock at the front door startled me, just as I was drifting off to sleep.
Mom opened the door, and Fritz entered from the small enclosed porch carrying a shotgun.

"I know you're worried about bears," he said.
"They're not likely to bother you, but I thought you'd feel safer with this." 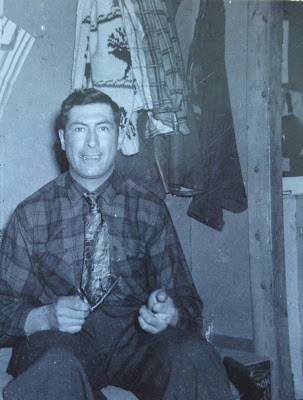 I fell asleep as Fritz was showing my mother
how to fire the shotgun:
"Don't worry about aiming carefully.
Just point and shoot,
because the shot sprays."

Mom often said that she didn't sleep a wink that night,
but I know that wasn't true.
The inevitable happened, and in the middle of the night,
I woke up having to go to the bathroom.

I was scared to death at the thought of trekking to the outhouse in the dark;
but the more I tried to convince myself that I didn't have to go,
the more I needed to go.
Finally desperation drove me out of my bunk.

I tiptoed into the front room.
Mom was sound asleep on the cot with Gretchen curled up at her feet.
The shotgun lay on the floor under the edge of the cot.
Gretchen gave me the once-over as I crept by,
stretching, yawning, and closing her eyes.

I slipped out the kitchen door, kept my head down, and streaked for the outhouse.
I stopped halfway up the path.
Although it was a moonless night, to my surprise, I could see the rough path.

I looked up.  A million stars gleamed brightly,
and northern lights shimmered in red and green curtains rippling in the sky.
I turned around and saw the aurora's reflections moving on the surface of Lac Seul,
and a cloudy band of light, the Milky Way, glowed toward the south.

Beauty won.  I sided with the open door.

The stars and aurora weren't the only lights.
Hundreds of fireflies winked on and off
in the rough fields around our dark cabin and the Garrick's dark home.

The enchantment of the warm summer night lured me out to a grassy patch on the hill
where I sat down and drank in the beauty of the stars, the northern lights, and the fireflies.
The aurora teased me with dancing shafts of red and green
that reached for me on the hill, pulled up, and dove for me again.
The light spoke to me in crackles and buzzes and held me in its elemental spell.

I might have sat there till dawn outshone the aurora,
but crazy laughter broke out on the water near the fish house,
answered by quavering laughter across the cove.
Other voices erupted in eerie wails and shrill yodels,
raising the hairs on my arms and sending a chill down my back.

I froze where I sat and stopped breathing;
then I realized what I was hearing:
the haunting voices of loons calling to each other on the water.
I had heard loons before, but never such a variety of calls nor in the middle of the night. 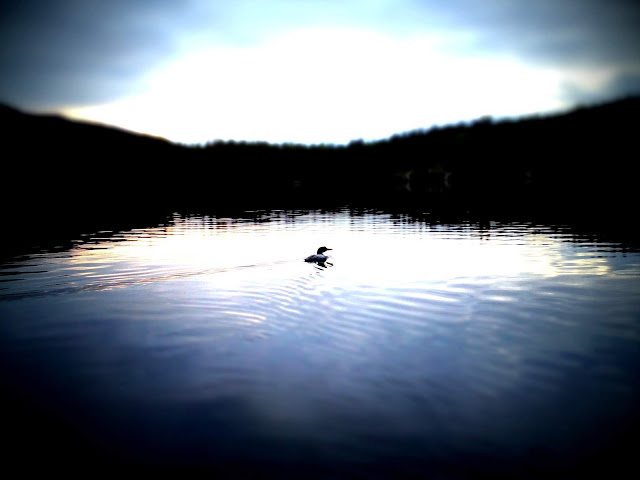 
Reluctantly I stood and walked back to our dark, stuffy cabin,
tiptoed past my sleeping mother and Gretchen,
and scrambled up into my bunk in our crowded bedroom.

Two nights before I had fallen to sleep in Lansdowne House.
One night before a pervert had molested me in a train car full of people.
This night I heard the chatter of the northern lights and a chorus of loons,
in a place I had never heard of until we flew in earlier in the day.
It was a long time before the voices and images swirling
in my overwrought brain stilled, and I could escape into sleep. 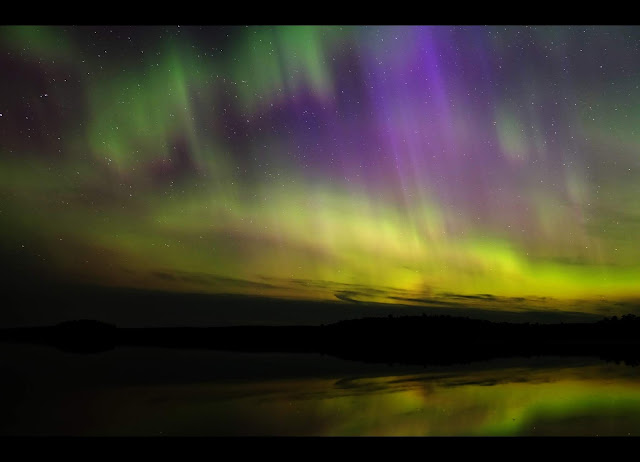 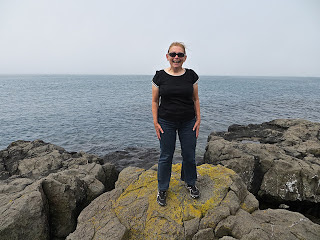 2.  The Boys:
Fritz (37) and John (22) Garrick, whose family cabin we were renting:  They were commercial
fishermen on Lac Seul.

4.  The Milky Way:
The Milky Way is the galaxy that contains our Solar System.  The band of light we see is
multitudes of stars that the naked eye cannot distinguish among.  Our galaxy is a barred spiral
galaxy, and our Solar System is located within the disc about 26,000 light years from the
Galactic Center.  Wikipedia 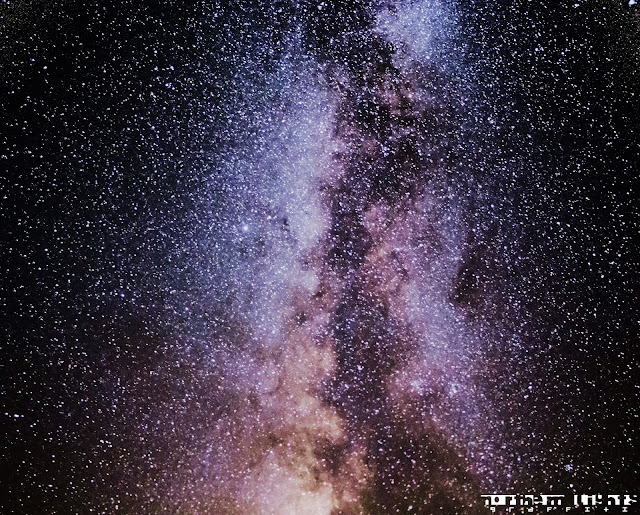 5.  Fireflies (Lightning Bugs):
These are winged beetles that uses bioluminescence to attack mates or prey.  Their light is a "cold"
light with no infrared or ultraviolet frequencies.  The yellow, green, or pale red bioluminescence
is chemically produced from the beetle's lower abdomen.  Wikipedia


6.  Post Referred To:  The Pervert and the Sandwich Man 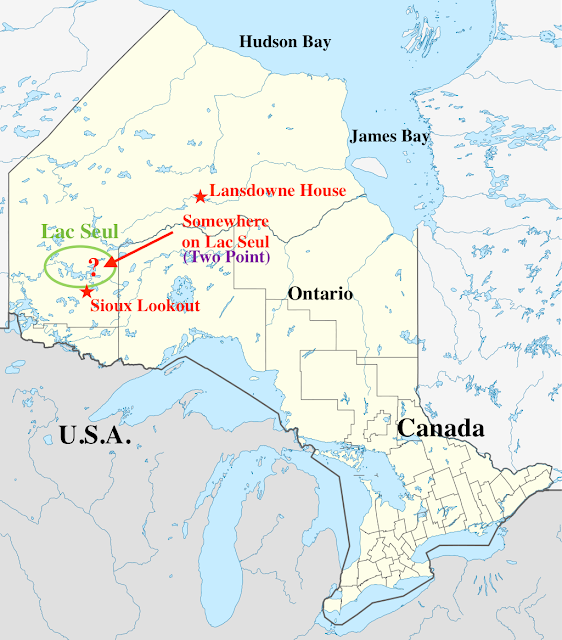 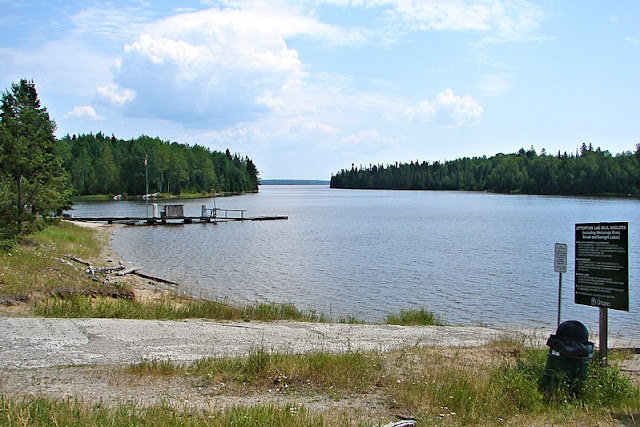