I remember when my father's Lansdowne Letter written on January 17, 1961 arrived.
It contained two of my father's Indian stories that had such a powerful impact on me. 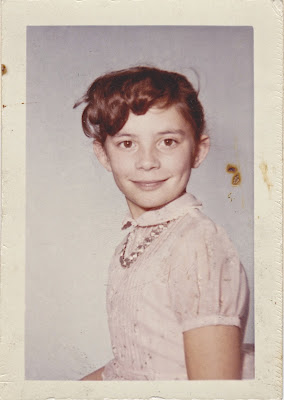 His Indian stories had already propelled
idealistic me to act,
and I was well into a project
as a surprise for my father,
one that would powerfully impact
him in return.


Dad's letter described two incidents that I have never forgotten,
although I find that my perspective has changed from that of my ten-year old self.

Hi There Again:
Today was just trouble from the word go.
As you can see, I can’t even type right,
why, it got so bad after a while,
that I figured what else can happen?

This question was answered for me before the end of the day,
when an old Indian woman put a curse on me.

I had cuffed her grandson on the ear in school,
so she came down with someone who could speak
both Indian and English and proceeded to put this curse on me.

Oh, it wasn’t one of their more serious curses,
just one that was calculated to cause me considerable inconvenience. 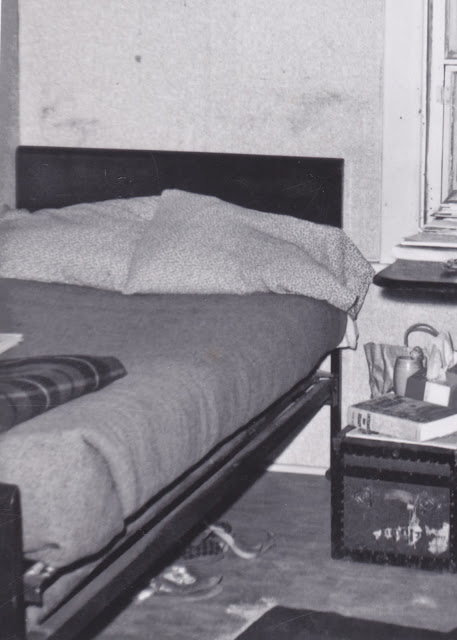 I am supposed
to get quite sick
for a couple of days
and not be able to eat,
or get out of bed,
or anything like this.


The amazing part of the whole thing is that
they put a lot of faith in curses and all such jazz.
Apparently anyone can put a curse on anyone else.
But the older you are,
the more potent your curses are supposed to be.
This old gal was no spring chicken, I can assure you.

It will be interesting to see just how powerful her cursing powers are.
If she really has the touch, I should learn it from her, and go visit S/L Lewis, shouldn’t I? 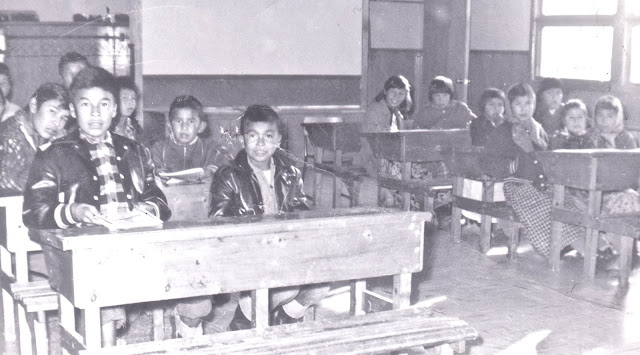 
This reminds me of something I was reading
in the medical records over at the nursing station the other day.

I was helping Mike type up some of his records,
and I came across the case history of a woman who was mentally deranged,
or as the Indians put it, possessed of a Wintigo.

This is how they proceeded to treat the poor woman.
They cut a hole three feet square in the floor of the shack where they lived,
and then they dug a hole of the same dimensions under the shack
to a depth sufficient just to bring her head just above the floor of the shack,
and they put the poor creature in the hole
and there she stayed for over three years
coming up only to answer the call of nature.

Apparently the calls of nature that she answered
when she was out of the hole were many and varied,
for the record states that during the period
that she spent in the hole, she bore two children.
She finally died of T.B.

This sounds like something that you would hear about during the Middle Ages,
but it happened in Canada, in the early forties or late thirties,
just about the beginning of the war.

After I got the stoves lit, I went down to the water hole;
and, in the process, I managed to drive my ice pick
right through the ice and straight down to the bottom of the lake.
I had to buy a new one with my own money,
and they cost $7.50 each.

After I got the hole opened, I managed to spill
half a bucket of real cold lake water down inside my right overshoe.
After this, one of the kids spilled ink down my shirtfront,
and I ripped my pants on a packing case.
And all this before dinner yet!!!

I can’t remember just what happened to me after dinner,
other than the curse being put upon me,
but I had my moments in the afternoon also.

Well, I must sign off now and get to bed.
Bye now,
Love, Don. 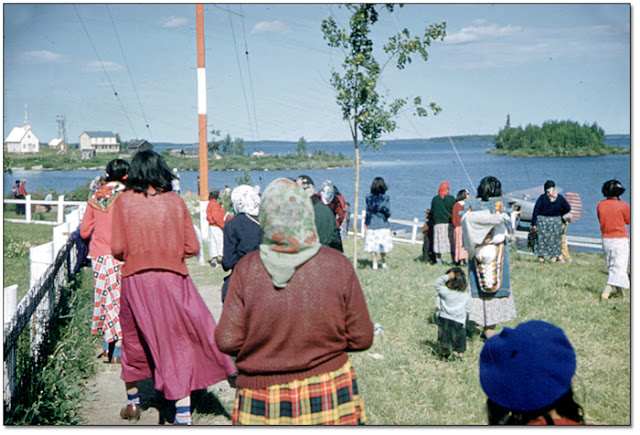 Lansdowne House
Members of the Fort Hope Band watching a floatplane arrive
at the dock at Lansdowne house at Treaty Time, June 1956.

When I was ten, the things that struck me about the cursing incident
were how funny it was that my father had been cursed
and wondering if the curse would work on him.

Now what impacts me is my father writing,
"I had cuffed her grandson on the ear in school."

If I had ever physically hit a child in my twenty-five years
of teaching in an elementary school, I'd probably have lost my job.
But at the time my father wrote this letter,
corporal punishment was practiced, not only in the North,
but throughout all of Canada.

I have a vivid memory of eight-year old me
standing at the front of my one-room school
in Margaretsville, Nova Scotia.

I see the white faces of my kindergarten through grade six classmates
as my teacher strapped me with a leather strap:
three forceful smacks on each of my outstretched palms.
For passing a note. 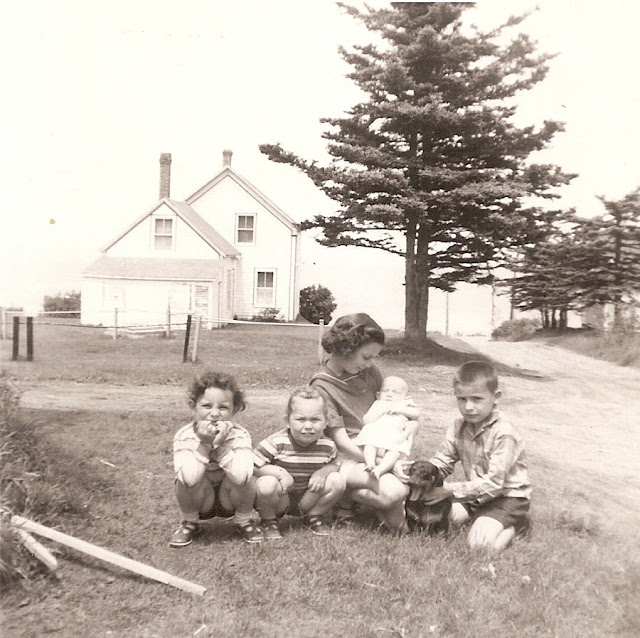 My Siblings and I in Margaretsville, 1959
Donnie, Barbie, Me with Bertie, Gretchen (Our Dachshund), and Roy
Photo Likely by Donald MacBeath
© M. Louise (MacBeath) Barbour/Fundy Blue
All Rights Reserved


I remember the pain, the humiliation, and my fervent wish
that my parents wouldn't find out.
I had always been told that if I got in trouble at school,
I'd be in far worse trouble when I got home.
I also remember clenching my jaws and refusing to cry,
even though my eyes filled with tears.

Now I read my father's sentence with the knowledge of the horrific treatment
of Indigenous children throughout the Canadian North.
My strapping doesn't begin to compare
to what generations of them endured over many years.

I, in no way, condone my father's cuffing any child in any school;
but I will say, that as a teacher, my father usually managed
his students with rapport, humor and fairness.
It was rare for him to physically discipline students
whether as a teacher or as a principal. 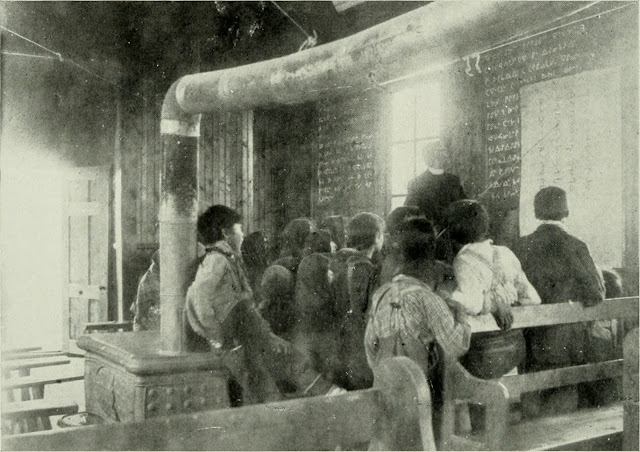 The Anglican Church Mission School at Fort Hope, 1910
Ojibway children are still taught their own language by the English missionaries.

Note:  By using this photo, I am not implying that abuse was occurring in this instance.
Wikimedia


As for the second incident, I have never been able to erase
the image of that poor woman stuck in a hole for the last three years of her life.
I was shocked as a ten-year old, but I am less shocked now.

I have come to realize that people everywhere in place and time
have grossly misunderstood and mistreated the mentally ill.

I will end with a question my father asked over fifty years ago
regarding the incident described in his January 17th letter:

2.  Wintigo:
I am using my father's spelling, which is one of the many variations of this word.
Wintigos occur throughout Anishinabe legends and mythology.  They are depicted in different
ways:  as man-eating giants or as people possessed by a Wintigo for committing sins such as
selfishness, gluttony, or cannibalism.  A wintigo's appearance is that of a huge ice-coated monster.
Typically, the only escape for a person possessed by a wintigo was death.
nativelanguages.org 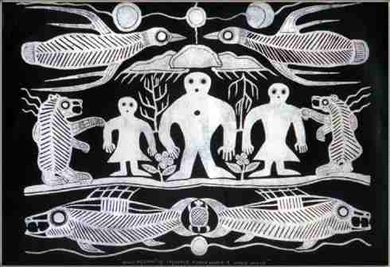 5.  Resident Priest:
It was Father Ouimet who confirmed for my father that this incident had occurred as described
in the nursing station records.  What is not clear is whether or not Father Ouimet was the
resident priest at the Roman Catholic Mission when the woman was confined to the hole. 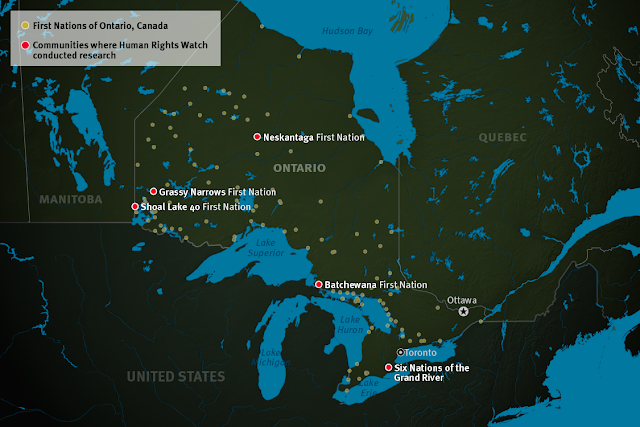