The Lansdowne Letters: Dogs and Death


Whenever my mother, Sara MacBeath, opened the latest letter
from my father in Lansdowne House, we never knew what to expect.

The contents could be funny, shocking, poignant,
or alien; but to me, they were always fascinating.

Guaranteed I longed to see and to experience it all! 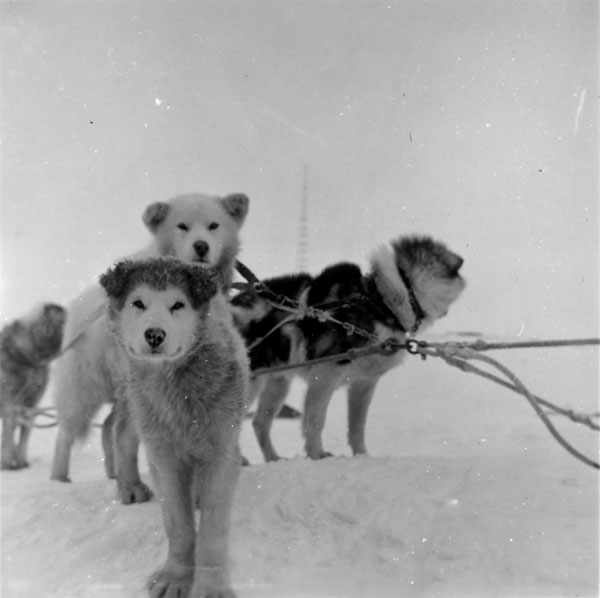 Well Hi There:
I meant to tell you something else about dog teams,
but I got off on that prospector tangent,
and I didn’t have time to tell you last night, so here goes.

It is very interesting to watch them training a pup to be a sleigh dog.
I have never seen a whole team trained at once,
but judging from the difficulties that I related to you the other day,
it must be an exasperating job.

The way that they break in a pup with an experienced team,
though, is quick and produces results.
Of course, it is kind of rough on the pup, especially if he is a stubborn one.
They just hitch him in the middle of the team and start traveling.

The pup comes along whether he likes it or not.
He has two options, he can come on his feet or he can be dragged.

I was watching them train a reluctant pupil a while ago,
and he elected the latter course.
He just lay on his back and put all four feet straight up in the air. 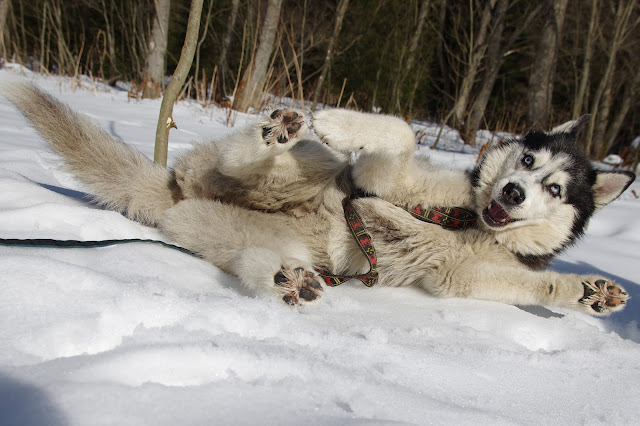 
That did hold things up for a moment.
The driver just started the team, and off they went
at a rather lively clip, dragging the pup.
They must have dragged the poor animal about half a mile
before he managed to get his feet under him.

As I said, it certainly isn’t too humane,
but it sure does produce results.
After his rather rough initiation, this pup,
while he objected strongly to be harnessed,
always behaved well once he was hitched to the team. 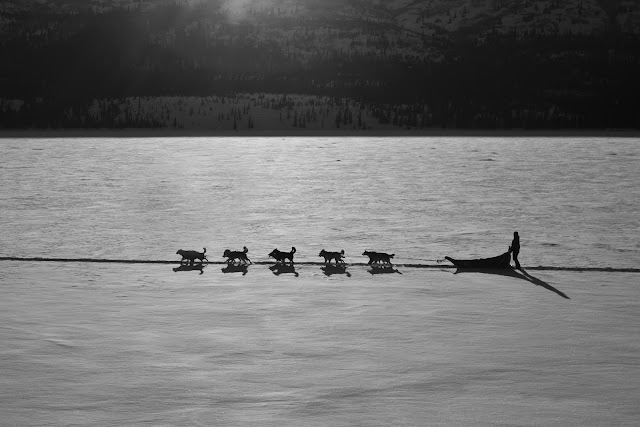 The Indians are very cruel to their animals, all except their cats.
They only feed the dogs enough to keep them alive in the summer,
because it is the summer and they aren’t being worked
and are not earning their keep.
As a result, the dogs are just about starving in the summer.

Even in the winter their diet, while it is ample, is a long way from being luxurious.
All the dogs are fed on frozen fish – one or two fish a day being their daily ration. 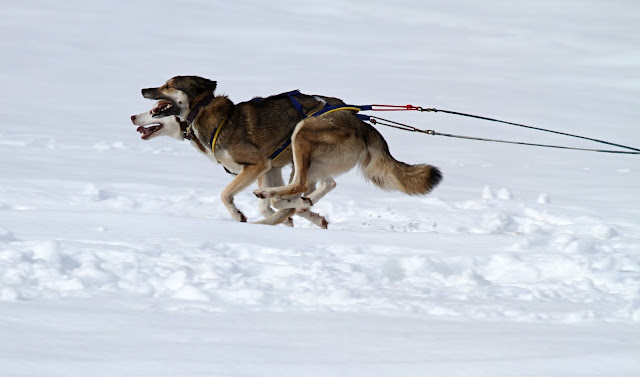 It is not that the Indians are purposely cruel;
it is just that compassion is one quality
that seems to be missing in the Indian’s makeup.

One of their children could be dying on the floor,
but the Indian would just sit there and watch it.
Oh they are concerned and sorry that they are going to lose the child,
but they wouldn’t be half crazy like I would be if it were one of mine.

Their attitude seems to be that if it is going to die,
it’s going to die, and that’s that.
They will wail and mourn something fierce after the child is dead,
but the only emotion they express during the dying is extreme interest.

If an Indian dies, they don’t hold anything like a wake or a lying in state.
They are terrified of dead bodies, and they don’t even wait
for the body to cool before they get it out of the house.

The Father says that he has, on several occasions,
gone into the church to light the fire in the morning
and has tripped over the dead body of someone that has died in the night.
The Indians wouldn’t even wait till morning to get it out of the house.

If the person died at two, he would be put outside at five after two.
If they can’t get him to the church, they will tie him up in a tree,
away from the dogs, till it is time to bury him. 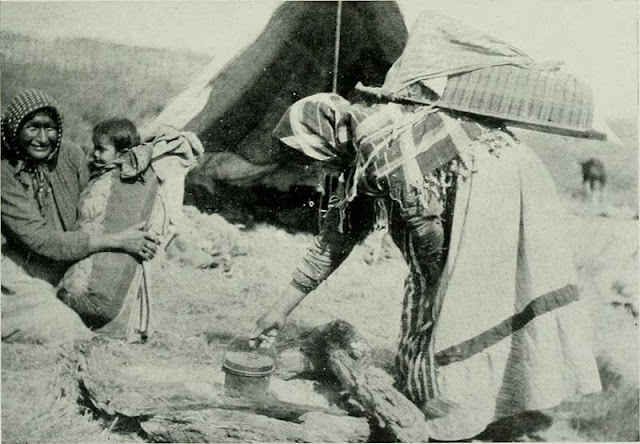 
I think there are many things that White people
did not understand about the Ojibway people a half century ago.

Perplexing behaviors that my father observed,
like the way that the Indians treated their dogs,
were probably rooted in their not too distant past
when life was tenuous and survival was uncertain.

John J. Honigmann wrote in his 1948 anthropological report
on the Attawapiskat Indians west of James Bay
that the Indians expected to be hungry and to lack food
because in the past they had faced serious starvation
in lands chronically short of large game animals.
Understanding that makes their treatment of dogs fathomable.

I don't know how my father learned about the behavior
of the Ojibway with regard to dying and death.
It's apparent that he discussed the topics with Father Ouimet.

I'm guessing there was a lot that my father didn't know and understand
about local Ojibway beliefs and practices.

He and Father Ouimet represented the government and the church,
and no matter how well-liked they were personally,
their institutions were pursuing policies of assimilation
by suppressing native languages, cultures, and traditions.
I would not be surprised to learn
that the local Ojibway kept many things private, hidden.

I had several close Ojibway and Métis friends.
Based on the intense conversations we shared,
I don't for a moment think they lacked compassion.

I think my father mistook fatalism for dispassion.
Again, I think the fatalistic streak I observed among
the Ojibway and Métis I knew was rooted in
the experiences of generations of their ancestors
living in a severe and intractable environment. 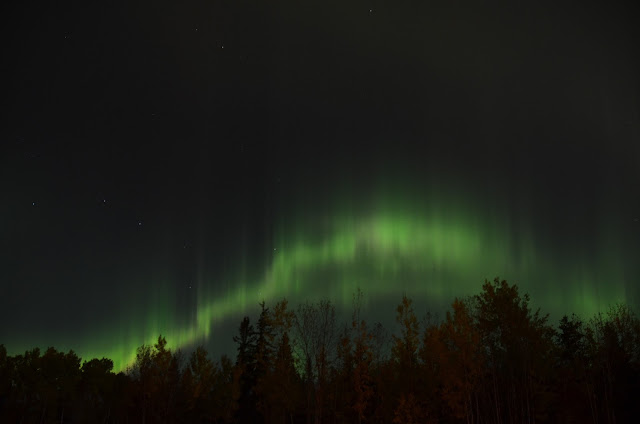 My only experience with death and the Ojibway in Lansdowne House
happened one weekend morning when the nurse,
Mike Flaherty, dropped by our house.

He was on his way over to the Island to see Father Ouimet
and wanted my father to go with him.
My father wasn't home, but Mike stayed to chat briefly with Mom.

Curious me had to ask why he wanted to see Father Ouimet.

"I have a package to give him," said Mike,
reaching into his pocket and pulling out
a small object wrapped in brown paper.

"It's a dead baby.  I'm taking it to Father Ouimet so he can bury it."

"That's a baby?" I exclaimed.
"It can't be any bigger than a pink eraser!"

"It's a fetus," said Mike, glancing at my silent mother.
"The mother miscarried and wanted me to give it to the Father."

"It is a baby, and you can't just throw it away.
It means a great deal to the mother
that Father Ouimet gives it a proper burial."

Well, I better get on," he added,
tucking the dead baby back into his coat pocket.
"Tell Don I'm looking for him,"
and he headed out the kitchen door.

I was shocked at the juxtaposition
of Mike casually slipping the paper-shrouded fetus into his pocket
and the grief of the mother who had lost her baby.
I wondered if the rituals of the church would alleviate her sorrow.

I may not have learned much about Ojibway beliefs,
but the incident swiftly precipitated
a series of fascinating conversations with my mother!

2.  Father Maurice Ouimet:
He was a member of the Missionary Oblates of Mary Immaculate,
a missionary religious congregation in the Roman Catholic Church.

3.  Treatment of Cats:
My father wrote in his letter of October 11, 1960:  "The Father tells me, that in spite of
all his efforts and the efforts of the Protestant Padre, the Indians still consider that all cats
have either a benevolent or malevolent spirit residing in their bodies and treat them with
considerable deference."

4.  John J. Honigmann:
Honigmann was an American anthropologist who conducted field-based research on the First
Nations people of the SubArctic of Canada, including the "Attawapiskat Indians" in the area on
the western coast of James Bay.  One of his papers was Foodways in a Muskeg Community:  An
Anthropological Report on the Attawapiskat Indians.  The report was written in 1948 and
distributed by the Northern Co-ordination and Research Centre, Department of Northern Affairs,
and National Resources, Ottawa in July 1961.

6.  Wataway ~ Northern Lights:
Wataway means Northern Lights in Ojibway.  It is also the name of a newspaper serving the First
Nations peoples of Northern Ontario.  One of the Ojibway teachings is that the northern lights or
wataway are the spirits of their ancestors celebrating life and reminding the Ojibway that they
are part of creation.  The dancing northern lights make a path for souls to follow as they journey
to the next world.   mfnerc.org 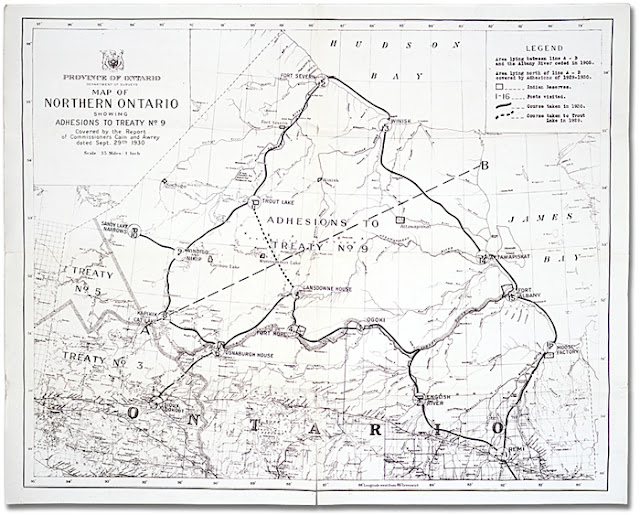