The Lansdowne Letters: So Far North


Can anything be more thrilling as a child than to go
on a long trip to an unimaginable place?

Looking back after a lifetime spent exploring the world,
my brother Roy wrote:
"Imagine what I felt when my mother told me
that we were leaving our cloistered existence in rural Nova Scotia
to go to northern Ontario and live with our father
in the great northern wilderness with the Indians.
There was even a name for it:  we were going to live in the "bush",
hundreds of miles from any town of any size - in Indian Country.
I knew all about Indian Country from watching Rin Tin Tin and Fort Apache.
My scalp tingled.  I instinctively moved a bit closer to my mother.
The enormity of the change that I was to experience,
as that cloistered nine year old, is almost impossible, even for me, to fathom."

I, myself, was almost sick with excitement as we drove
to the ferry terminal at the wharf in Digby.
The familiar, comfortable places in Smith’s Cove passed by in a blur
from Kinsman’s Store to Great Grammie’s
to the Hedley House and Mountain Gap Inn.
Digby, with its basin-side buildings raised on piles over the shore, soon followed.

Then suddenly there she was:  S.S. The Princess Helene,
the ferry that would carry us through Digby Gut out of the Annapolis Basin
and onto the treacherous Bay of Fundy waters. 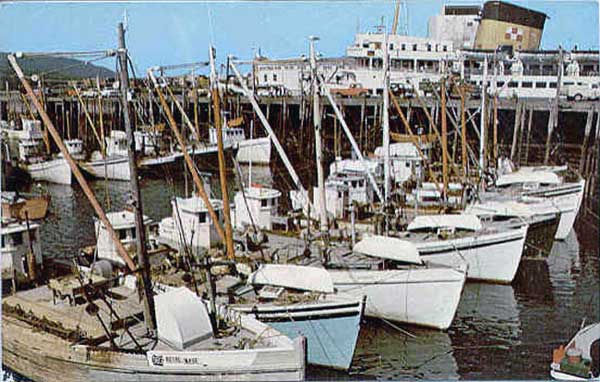 
Roy and I were veterans at crossing between Maritime provinces by ferry
and came prepared for the voyage with “lucky pebbles” stuffed in our pockets
to drop to the bottom of the bay halfway between Nova Scotia and New Brunswick.

Mom shepherded my three younger sisters, Donnie, Barbie, and Bertie
to the railing on deck where they could wave good-bye to our uncles and aunts.

Roy and I hung over the railing above the opening to the cargo bay.
We couldn’t believe our luck when we saw Gretchen being loaded on the ferry.
Our poor dachshund traveled all the way to Nakina, Ontario
by boat and train in a large, dark-green toy box.
“Gretchen, Gretchen,” we shrieked as we watched her travel
up the gangway and disappear into the hold.
We wouldn’t see her again until we caught our flight north five days later.

Roy and I were supposed to watch our younger sisters,
but we escaped to run around the decks
and up and down every set of stairs we could find.
It was a thrill to pass through the Gut, a gap Roy and I were convinced
had been blown open by an exploding volcano.
The familiar Victoria Beach and Point Prim on opposite shores of the Gut raced by.

Out on the water we searched for returning fishing boats
with their streamers of screaming seagulls
and spotted porpoises and dolphins following our boat.
It was windy, cold, and grey, but we didn’t care.
Let Mom and our three sisters stay inside,
we had a vessel and an ocean to explore. 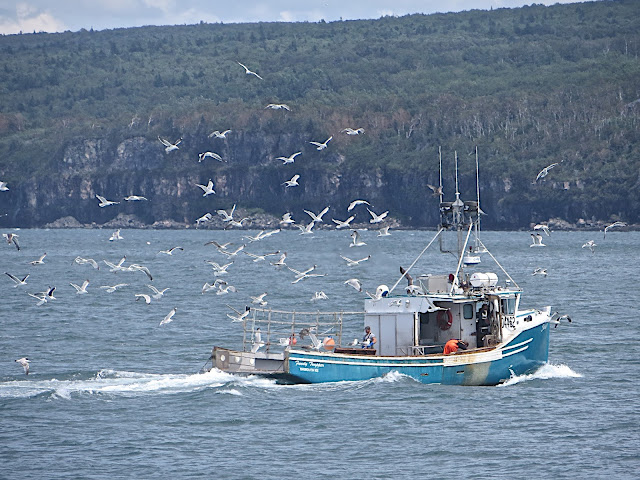 
About an hour out on the Bay of Fundy,
we dropped our pebbles overboard
and argued over whose would reach the ocean floor first.
I have no idea how we came up with the idea
that this was a “lucky” thing to do,
but it was our “secret” ferry tradition.
To this day, I drop a pebble overboard on a ferry crossing
honoring the memory of the adventure-loving boy and girl Roy and I were.

Then with our faces and hands burning from the cold,
we dashed inside to warm up, have something to eat,
and give our mother a break by watching our younger sisters.
I’m sure my mother was relieved to have a quiet cup of coffee and a cigarette.

Our baby sister Bertie loved the ferry rocking on the swells,
and  she raced up and down the passenger lounge on her unsteady feet.
I’m also sure my mother was delighted with that,
because she wanted Bertie to sleep on the train overnight.

In St. John we boarded a Canadian Pacific Railway train bound for Montreal.
A Red Cap carried our luggage to our compartment,
and a gregarious black porter made up our beds
while we had dinner in the train’s dining car.

Over and over Roy and I raced from car to car,
stopping to rock in the jerky connections between cars,
our laughter as loud as the roaring wind and the clacking wheels on the track.

Donnie and I slept up top in one overhead bunk,
Roy and Barbie shared a second,
while Mom and Bertie slept below.
Roy and I hung over the edges of our bunks watching the night country fly by
until the rhythmic clickety-clack of the train lulled Roy to sleep.
But I lay awake for long hours,
afraid that the bunk would snap shut,
quick as a clam in the mud. 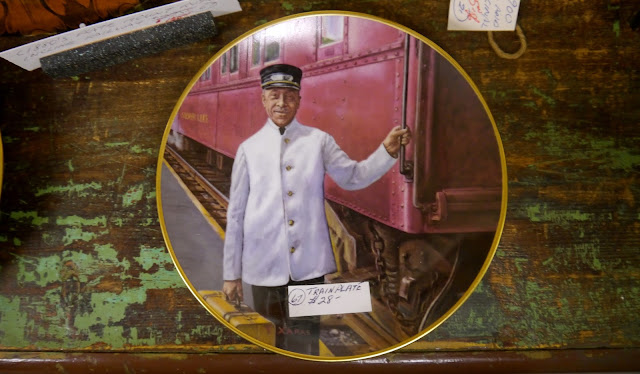 
Uncle John and his new son-in-law Art met us
in a cloud of steam at the frigid Montreal station.
Uncle John took everyone to his home to see Auntie Esther,
our married cousin Dawn,
and our three younger cousins, Faye, Sandy, and Baby Joanie.

Our three-night stay in Montreal flew by in a whirlwind
of shopping, sight-seeing, and a birthday party for Donnie.
I alone got to spend the nights at Dawn and Art’s.
Dawn and baby Randy went to bed early,
but Art and I stayed up late watching scary movies like the “Invisible Man.”
Art was the coolest of cool, pre-dating The Fonz by a decade or more.
We left after feasting on Auntie Esther's turkey dinner
with the whole family seeing us off at the station. 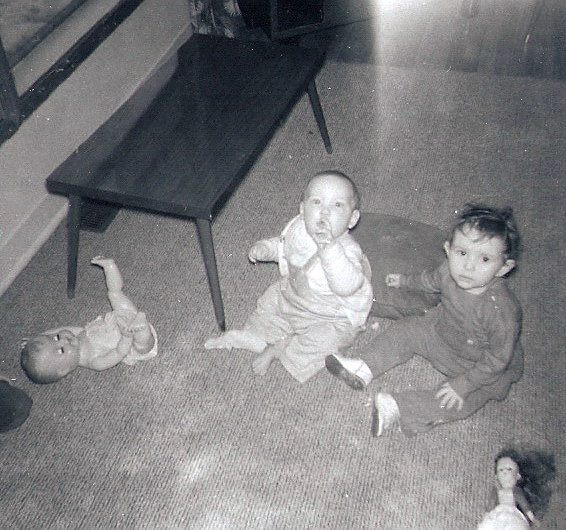 Baby Randy and Baby Bertie
Montreal, Quebec, Canada
Thanks to My Cousin Dawn MacDonald White for This Photo

We met Dad’s cousin Barbara on a platform along the way
and spent a second night sleeping on a train.
Bertie found her train legs and kept trying to escape from our compartment,
while Roy and I followed a new and friendly porter around,
badgering him with questions about how everything worked.
Again Roy and I sat up late watching the moon-lit,
snow-covered country pass by like a dream.
We had told anyone who would listen that we were going so far north
that when we got to Nakina the train had to turn around
because it couldn’t go north anymore. 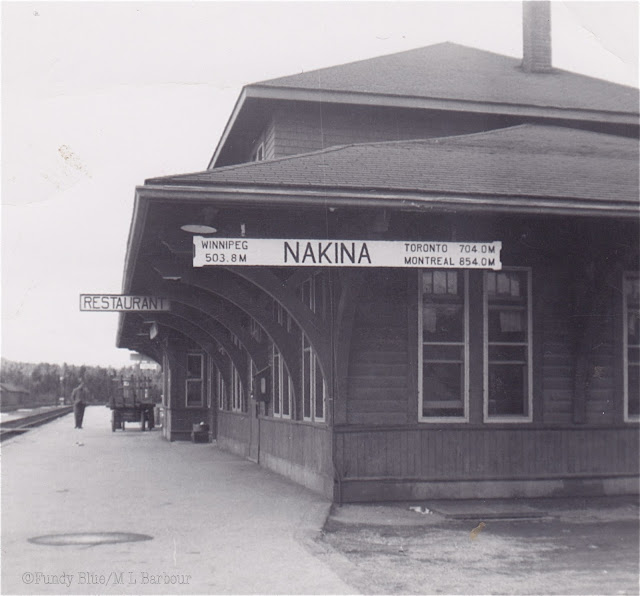 
In Nakina three Austin Airways employees met us
and herded us onto a Norseman for the final leg of our journey.
Gretchen practically wiggled herself inside out when she reunited with us.

We had never seen a plane on skis,
let alone taxied in one to take off on ice.
Racing down the ice with roosters of snow flying off the skis
was exhilarating and the lift-off stomach-flipping
as we rose steeply into the air and banked for the wilderness.


Those were the days of unheated cabins and bone-rattling engines
that made conversation impossible.
We huddled in the sub-zero temperatures,
our breath hanging in the air like fog on a still day.

My fingers and toes tingled in spite of my thermal underwear,
woolen socks and mittens, warm clothes and parka.
Gretchen sat on my lap throughout our flight, shivering with anxiety and cold,
her little black forehead wrinkling as she yawned in the thinner air.
Her tiny boots and coat, sewn out of a cast-off jacket,
were useless against the bitter cold.
I sat by a window and watched the alien landscape slide away,
the shadow of our tiny bush plane skimming over the ground far below.

Mom wrote of the experience,
“I never saw so many spruce trees in my life.
They are so close together that their branches go
straight up in the air instead of spreading out.
We flew over miles and miles of desolate country,
lakes and trees.  It is very beautiful.”

And beautiful it was:
The trees and lakes locked in ice, with no sign of life
in the frozen wilderness which stretched to every horizon.
The winter had drained all color from the land
leaving only the stark black brittle trees and the dazzling white of the deep snow.
The sky glowed an electric blue, assaulting my eyes with its clear brilliance.

And then out of nowhere a wide stretch of ice,
a long peninsula, a small island, a scattering of tiny buildings,
and ant-like people scurrying for the dock,
shadows long and blue-black in the late, late afternoon. 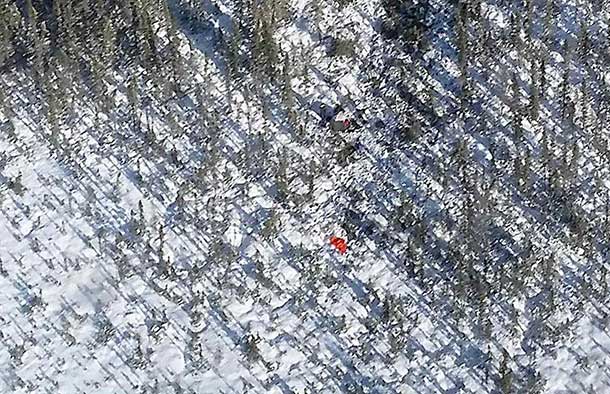 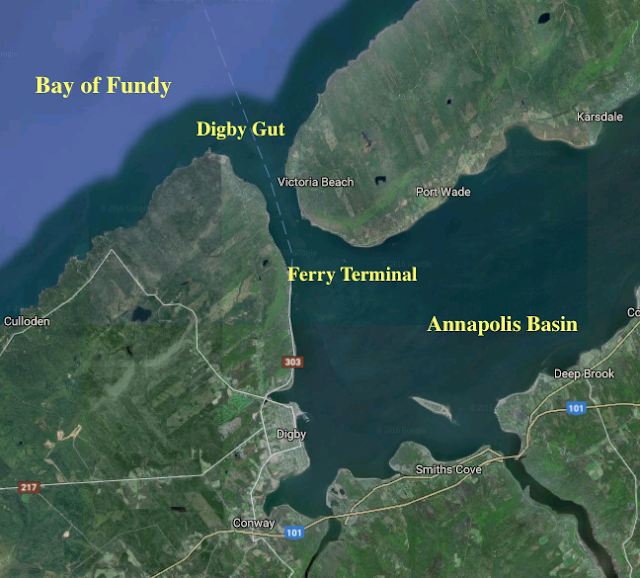 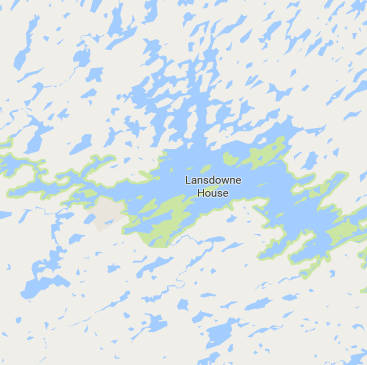