The Lansdowne Letters: The Inexplicable


My father arrived in Lansdowne House curious and filled with anticipation;
but, as he later reflected, "abysmally ignorant and unprepared"
as he ventured into the domain of his aboriginal brethren. 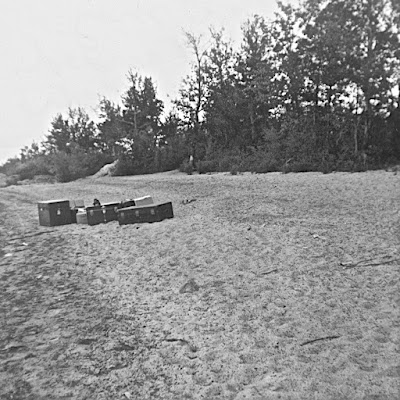 
Nothing in my father's Maritimes background
had prepared him to work among the Ojibwa,
and his one-day orientation by the Indian Affairs Branch
did not help or inform him about his new post in the north.

Today we are accustomed to having knowledge and information
literally at our fingertips, an internet search away.
A half century ago nothing about the obscure Ojibwa
was easily or quickly available to someone living in rural Nova Scotia.

With packing on short notice and traveling to the distant North,
there was no time for my father to research
the Indigenous people he would be living among.
He plunged into his northern adventure uninformed
about the Ojibwa whose children he would be teaching.
Some of the things he encountered he could never explain. 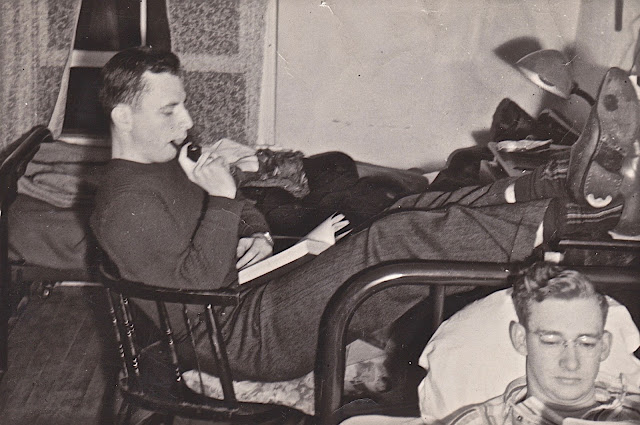 As a result of his experiences, my father later recommended:
The prospective Indian teacher would do well to acquaint himself
with some of the more commonly held attitudes and beliefs of the Indians.

You may not believe these attitudes and beliefs;
but nevertheless, just because they seem strange,
and even ridiculous to the white man,
they still play a large part in the everyday life of the Indians.
I do not advocate that you believe in or subscribe to
the various beliefs, attitudes, and customs of the Indians,
just don't mock them, especially publicly or in a derisive manner.

The main goal of Indian education is to change the Indian
as much as possible for the better and to prepare him
for eventual integration with the white population.  Naturally,
a lot of these old beliefs and superstitions will have to be eradicated,
but this will never be accomplished by ridicule.

One of the surest ways of antagonizing any race and uniting them
against you is to ridicule anything which they believe in strongly.
The Indians are intelligent and quite capable of learning
by example; and good examples are, I think,
some of the most effective teaching aids which you have at your disposal. 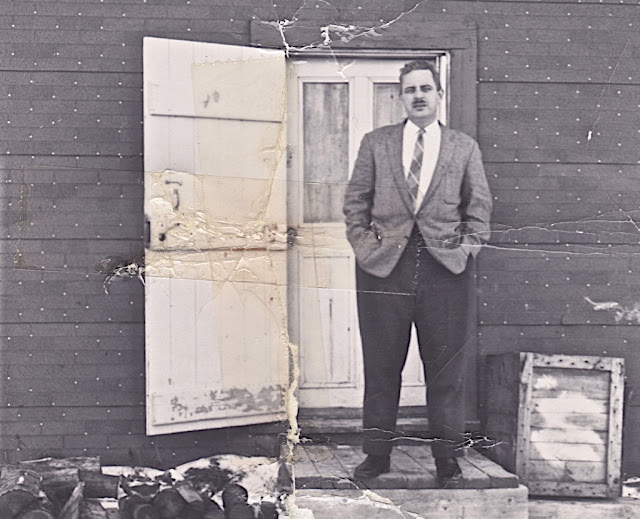 
I have had some experiences up north which just are not explainable
by white standards, experiences, or knowledge.

While I was at Lansdowne House, I had as one of my pupils,
the grandson of the local sachem or medicine man.
He was a mischievous and troublesome child,
and on several occasions I was forced to reprimand him,
and once or twice I had to chastise him.

The medicine man took great exception to this treatment of his grandson.
He came up to the school with an interpreter and put  a curse on me.
He said I would become sick in three weeks.

Of course, I didn't believe any of his claims,
and I told him so and laughed at him.
I continued to laugh at him, right up to the twenty-first day,
when I was as sick as a dog.

The medicine man also put a curse on the male nurse
and told him that he also would get sick in three weeks.
He was one day out with Mike,
for Mike did not get sick till the twenty-second day.

I am glad that the medicine man did not get too angry at me,
for he evidently had quite powerful medicine.
He cursed one of the Indians, telling him that he would die in three months.
In spite of all medicinal and spiritual assistance, the Indian died on schedule
three months to the day after the curse was pronounced upon him. 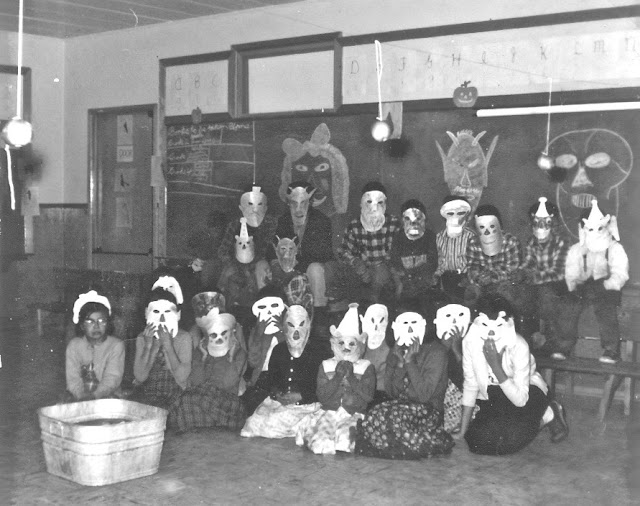 
Conditions are improving among our native population,
and have come a long way, even since the 1940s;
but, such conditions and improvements are relative,
because the Indian was so dreadfully backward,
superstitious, and ignorant, even as recently as 1940.

There is a reasonably well-authenticated case of the indescribably
cruel and primitive treatment received by an insane woman
at Lansdowne House during the early years of the last war.
Sarah, wife of John (last name omitted),
became insane or otherwise deranged.

John cut a hole in the floor of his shack,
two and a half or three feet square
and dug a hole of these dimensions to sufficient depth
that when Sarah was placed in the hole,
her chin was just level with the floor.
Here she spent the last four years of her life.

She was allowed out only to answer the calls of nature.
Apparently the calls she answered were many and varied,
for during this period she gave birth to two children.

The whole event, including the birth of the two children
is recorded in detail at the nursing station at Lansdowne House
and was confirmed to me by the resident priest.

What has never been explained to my satisfaction though is this:
If there was a nurse and if there was a priest at Lansdowne House,
why was this allowed to persist? 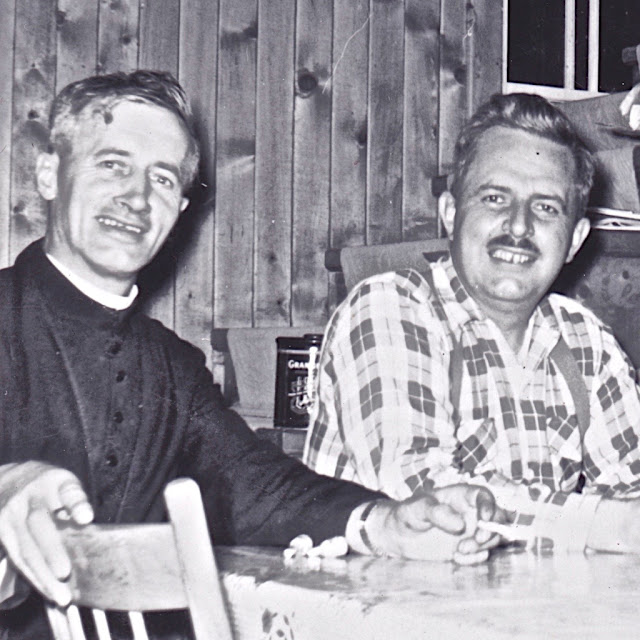 
I experienced a few inexplicable things too, but mostly later in Lac Seul.
I don't know the source of what I heard in Lansdowne House
that bothered me more than any other.

Likely I heard it from my mother or from Maureen McRae.
To an independent, precocious girl it was unimaginable:
Indian women sometimes killed their newborn girls
to spare them a life of hardship and misery. 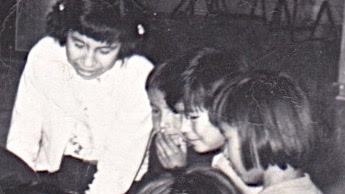 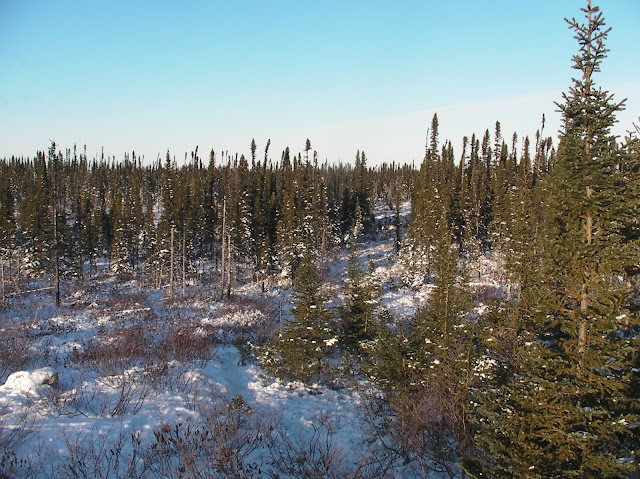 
Notes:
1.  Unpublished Handbook:
Recorded in Dad's unpublished The Northern School Teacher:  A Hand Book To Be Issued To All
New Entrants To The Teaching Profession In The Indian Schools In The Sioux Lookout Indian
Agency, 1966, Introduction, page 1 and Pages 22-23.

2.  Mike O'Flaherty:
Mike was the nurse at the nursing station and had to handle whatever came up,
especially when the planes could not fly.  My father was helping Mike type medical
records when he came across the story of John and Sarah.


3.  Father Ouimet:
He was a member of the Missionary Oblates of Mary Immaculate,
a missionary religious congregation in the Roman Catholic Church.

4.  Maureen McRae:
Maureen was married to Duncan, one of the two Department of Transport employees
in the community.  They were good friends of my parents, and Maureen took me under
her wing when I arrived in Lansdowne House.  She taught me to sew. 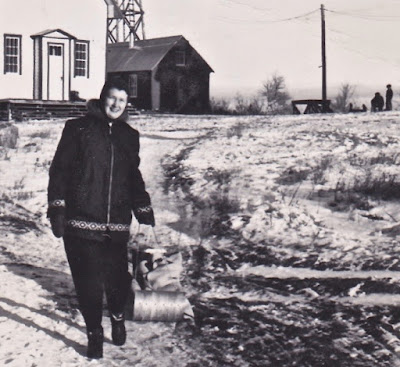