The Lansdowne Letters: The Pervert and the Sandwich Man


Somehow on that hectic crazy day of June 12, 1961
my mother, my four siblings, our dachshund Gretchen, and I
made it on the overnight train from Nakina to Sioux Lookout,
after our hasty flight from Lansdowne House to Nakina. 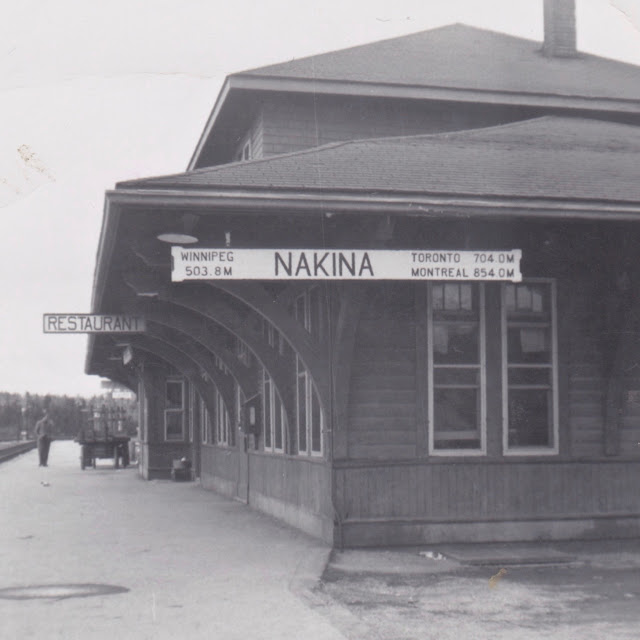 Unlike when we traveled from Nova Scotia to Ontario in February,
we did not have the comfort of a sleeping car with berths.
We sat up in the left front of a passenger car, occupying three seats.
Barbie and I sat in the very front with no seats facing us or across the aisle from us.
Mom and Bertie sat in the seat back to back with Barbie's and mine,
with Roy and Donnie in the third seat facing Mom and Bertie.

Poor Gretchen was stashed in the baggage car three cars behind us,
ensconced in the green toy box she had traveled in from the Maritimes.
When the train went around a curve to the left, we could see Gretchen's car well.
We wondered how she was faring in her nest of blankets inside the toy box.
We were worried because the cover of the box was down,
and she was alone in the dark. 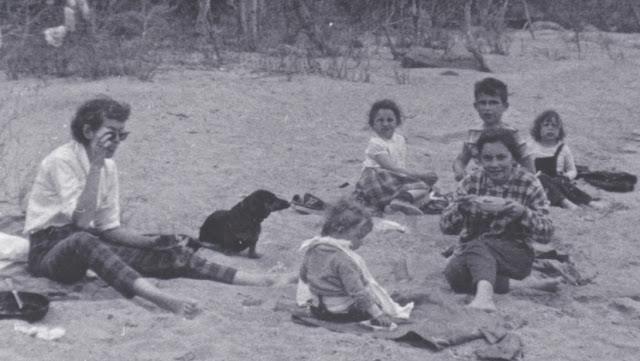 
The train conductor stopped by periodically to chat with us,
and we kids pestered him with worried questions about Gretchen.
He assured us that he was personally checking on her and that she was doing fine. 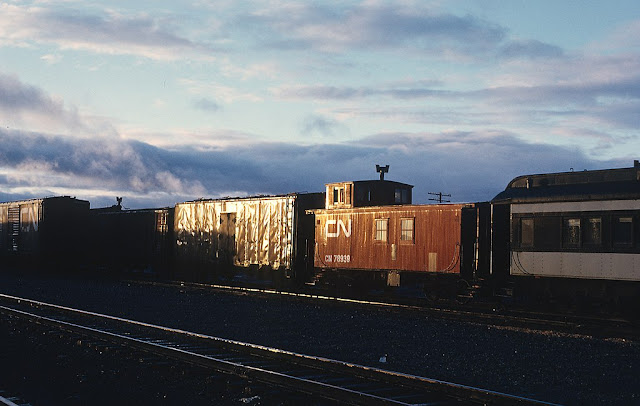 
The big excitement was the dining car!
We rarely had a chance to eat out, so it was a thrill
to go to the dining car and order from a menu.
We had cake and ice cream for dessert,
because it was our mother's thirty-sixth birthday;
but for my mother it was all about a hot cup of coffee and a few minutes to relax. 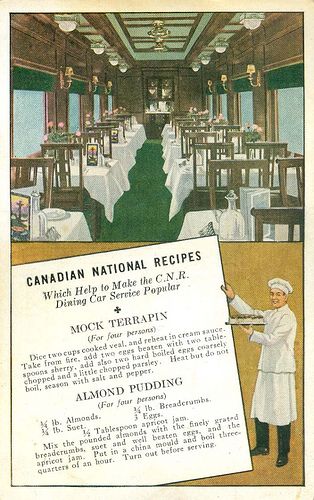 
After dinner we settled down as best we could for the long night on the rocking train.
The lights dimmed in our car, and the conversation hushed and gradually ceased.
My family, exhausted from the events of the day,
dropped off to sleep quickly, but I was wired and restless.

Barbie was curled in a little ball under a blanket by the aisle,
which left me lots of room to twist and turn on the wide seat.
I turned backwards and watched Gretchen's baggage car.
I turned forward, laid my head against the cool window,
and watched the dark forest fly by,
revealed only by the faint light spilling from the train.

I moved close to Barbie, leaned my head back on the seat,
and stared at the ceiling trying to quiet my racing brain.
Images of our abrupt departure, the bumpy flight out,
the raging forest fire, and our scramble for the train
circled around and around in my mind like hawks riding a thermal.

"You're still awake," said the conductor coming up the aisle from behind me.
"Is everything okay?"

He sat on our seat with his back to the window and added,
"I just came from the baggage car.  Your little doggie is doing well.
I let her out for a few minutes and gave her some water.
She was really happy to see someone."

I thought of Gretchen,
of how she would jump up joyfully when she saw me,
of how good it would be to give her a big hug,
and of how her tongue would tickle as she covered my face with licks.
It had been a tough day for her too.

But I felt uneasy.
The baggage car was dark.
No light escaped from it.

A tiny voice deep inside me was whispering,
Do not go back to the baggage car with this man.

"I promised Mom I'd look after Barbie.
I can't leave her alone," I replied.

"Barbie will be just fine.  She's sound asleep."
He put his hand on my knee and squeezed it.
"Think how excited Gretchen would be to see you!"

Shocked, I instinctively drew back, scooching closer to Barbie.

My throat was paralyzed.
I couldn't make a sound.
He pushed his hand firmly up my thigh.
I couldn't move.
I was stunned.

I had no idea that a man would do such a thing,
especially the conductor who had been so kind to our family and Gretchen.

He groped me all over.
I could barely breathe.
My heart beat so loudly, it whooshed in my ears.

Then he grabbed my right hand and forced it down
on the hard lump between his legs.
I was so horrified that it snapped me into action,
and I wrenched my hand away.

Anger flared in his blood-flushed face.
He leaned forward into mine, breathing heavily, and said,
"You say one word to anyone, and I'll hurt your dog."
Then he vanished into the connection to the car in front of us.

I don't know how long I sat there too terrified to move,
so afraid that he would return to our car.
All I knew was that I must stay awake,
because I couldn't risk that man returning and going after Barbie.
I had to protect my sister from that filthy, disgusting man.

I pressed against the back of our seat, determined to sit up wide awake,
and I realized there was a small gap between Barbie's side of our seat and mine.
Furthermore, there was a similar gap in my mother's and Bertie's seat
which was back to back with ours.

I wriggled my right hand between the gaps
and touched my mother's lower back.
She was stretched out on her seat sleeping deeply.
Then I found her belt and clutched it in my hand.

My relief was so strong that tears suddenly gushed down my cheeks.
If I could just hold on to my mother's belt, I'd be okay.
I'd make it through the night.

I sat in the shadowy car with my arm stuck through the seats behind  me
and clung to that belt like it was a life ring in heaving waves. 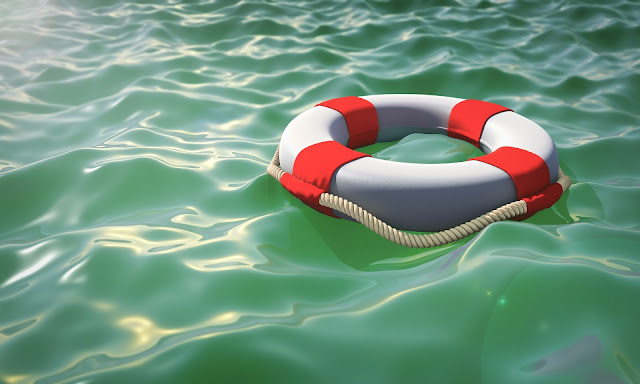 
I stared at the blank wall facing me, trying to block
the appalling memories of what had happened to me.

Time crept by, and then I heard soft steps coming up the aisle behind me.
I shrank into the back of the seat
and clenched my mother's belt even tighter.

The sandwich man walked quietly by me,
did a double take, stopped, and stared at me.
I froze, unable to breathe.

I recognized him instantly for he had been up and down our car,
selling sandwiches, pop, snacks, and cigarettes several times,
but this time he wasn't carrying anything.

"Did that old coot bother you?" he asked.

Tears welled up in my eyes, but I couldn't speak.

"He did, didn't he?" he said through gritted teeth,
looking at my arm crammed between the seats.
"It's okay to let go.  You can let go of your mother's belt."

It must have been his realization that I was gripping
my mother's belt that stopped him in his tracks.

He crouched in front of me and said gently,
"Don't worry.  I'll make sure he doesn't bother you again.
Just let go."

I nodded mutely and worked my hand back.
My fingers were stiff from clenching so long,
and I wriggled them to loosen them up and get rid of the prickles.

He stood back up and said,
"Why don't you try to get some sleep?"

"I can't," I said.  "I have to watch Barbie.
I can't let him touch Barbie."
Tears were flooding down my face.

I did.  I fell, bone-weary, into a sound sleep
after he came back to check on us and assured me,
"Trust me.  He's not coming back."

I never saw the conductor or the sandwich man again.
I didn't say a word to anyone.

Gretchen was safe in her green toy box,
stretching, yawning, then leaping up to greet us
madly wagging her tail when we opened the top of the toy box.

And then we were unexpectedly flying to some place called Lac Seul,
not staying in a rented home in Sioux Lookout as we had thought.

In the weeks and months, and years that followed
I'd think back to that night on the train and wonder:
How could a conductor molest me in a train car full of people?
How could I not make a sound, call for help, wake my mother?

And worst of all:
They knew.  People who worked on the train knew.
They knew what the conductor was doing to young girls,
but they didn't do anything about it.

I didn't blame the sandwich man for not doing more than he did.
Even as a young girl, I understood that he was young,
needed his job, and the conductor had a lot more power than he did.
To this day I am grateful for his compassion in the moment
and for how he watched over my sister and me the rest of that night.

It was almost two years before I told my mother.
I was so ashamed, so mortified, so embarrassed, so disgusted,
so afraid that I had done something wrong,
so confused and so unbelieving that I hadn't screamed
at the top of my lungs and called that bastard out.

My mother was aghast:  "Why didn't you tell us?
We could've done something.
We'd have made sure he never touched a child again."

We were standing in the kitchen in Sioux Lookout,
a bright, sunlit, white kitchen.
My mother wrapped her arms around me and gave me such a hug.
"You were only eleven, Weesie, such a young girl.
It wasn't your fault.  You did nothing wrong.
Don't ever be afraid to tell me anything, ever again."

That night on the train changed me.
I didn't know it at the time,
but that night I became a runner. 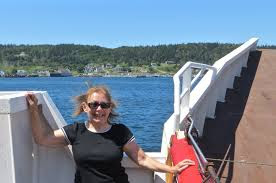