Early June 1961 provided a succession of beautiful spring days in Lansdowne House.
Our stranding on one of the many islands in Attawapiskat Lake
did not dampen our enthusiasm for running free outdoors.

While my parents packed for our upcoming move to Sioux Lookout,
we kids played outside every moment we could.


Roy and I spent many hours among outcrops and along the shore
playing Cowboys and Indians or Cops and Robbers with our cap guns,
an activity that was popular during the 1950s and 1960s.

My father was a skilled marksman,
and we kids all spent time on the range
at some point during our upbringing;
so it wasn't odd for Roy and me to have a blast with our cap guns.

Of course, we argued over who was wounded or killed
(usually the Indian or the Robber),
and we softened the ignominy of loss
with dramatic portrayals of injury and dying.

The mock-revolvers must have been popular in Lansdowne House,
for the red paper rolls with fifty caps were stocked at the Bay. 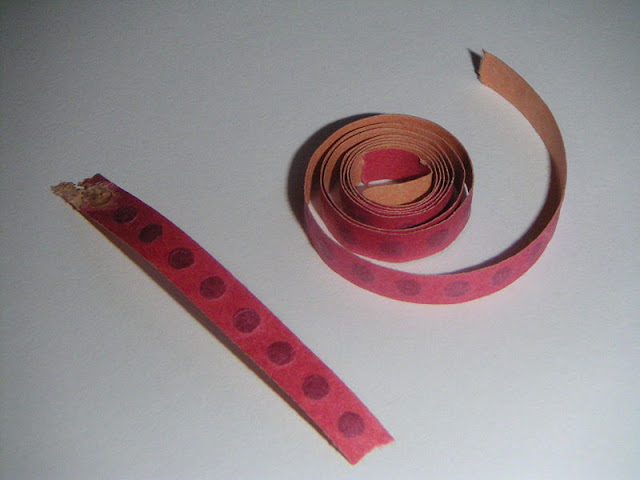 
The caps were tiny discs of percussion fireworks pressed between two layers of paper.
When you pulled the trigger, the paper roll advanced,
loading a new cap and releasing the hammer.
The strike of the hammer produced a gratifying bang and puff of smoke.

We were always caught between the desire to fire repeatedly
and the worry of running out of caps,
which meant there was no argument over who was about to die. 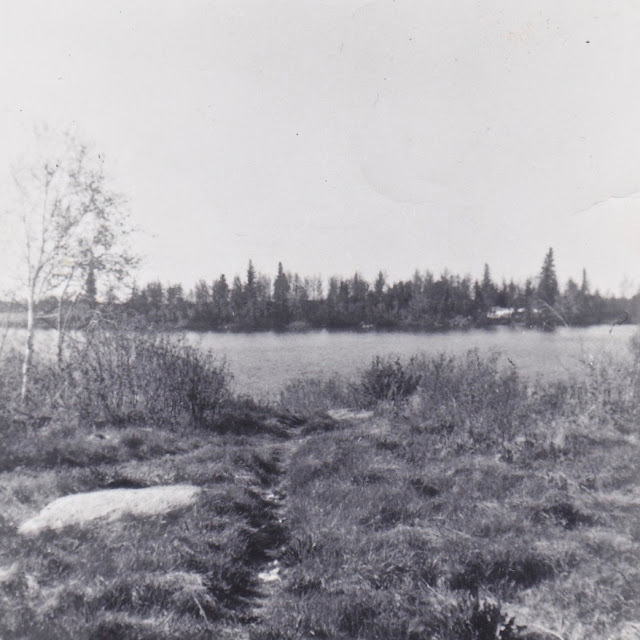 All the World Is a Stage
This is the path to the lake where we got our water.

My sisters and I played a tamer game of Bride and Bridesmaids,
sometimes with a reluctant (or desperate for someone-to-play-with)
Roy roped in as the hapless groom.
The game was inspired by abundant wildflowers,
and the object was to make gorgeous bouquets
and march down the aisle (the path to our waterhole)
humming "Here Comes the Bride."

Gorgeous dandelions popped up everywhere,
and I swore when I married for real,
I would carry a huge bouquet of vibrant yellow dandelions.
(I did not!) 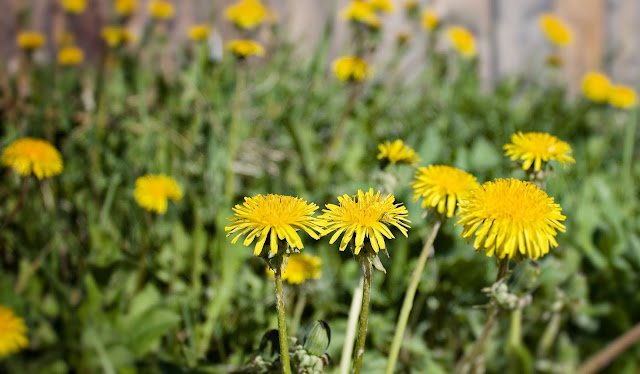 
We played lots of more typical games, too,
like Hide and Seek, Red Lights Green Lights, and Giant Steps
during the long twilights after supper.
My mother's experience of these lovely days was quite different. 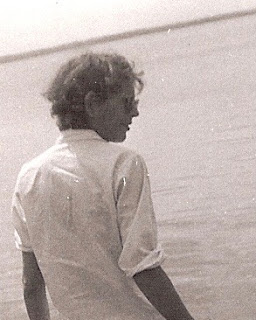 My mother wrote to her mother-in-law,
Myrtle MacBeath:

Dear Mother:-
Things have been very quiet this week
with the exception of the outing last Sunday.

We all enjoyed the trip though and hate to leave
just when the weather is getting nice,
especially when there are so many nice places to go for picnics.

Actually it's very safe because there are so many islands.
If the weather turns you can always stop and wait.

The McRae's had a worse experience than we did.
Maureen was telling Louise they were caught out in a thunder and lightening storm
and stopped at the same place as we did, but they didn't even have a match.

Mike has quite a boat; it belongs to the government.
It's a cargo canoe like we had,
but with a much stronger motor and pontoons, one on each side.
It is unsinkable. 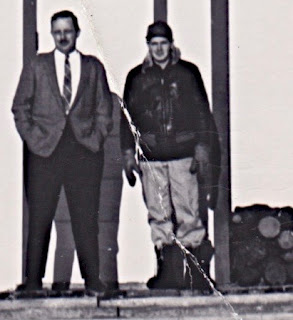 Last Saturday Duncan and Maureen
were over for bridge.
Monday they had to fly Duncan to Sioux Lookout.
They didn't know what was wrong with him,
but think it might be some kind of kidney infection.
He wired that he would be back Friday.

Louise stayed with Maureen one night, and Maureen fixed her hair all up for her
and played Macbeth for her on her record player.

Monday night we went over to Maureen's and played bridge
with Maureen and one of the boys from the geological survey crew.
They are all college students or graduated.

Don and Barbie have been down with colds.
Don feels pretty miserable today, but everyone seems to be taking it all right.
Roberta is outside now playing with a little Indian baby.

It sounds as if you have been having your hands full
with the apartments and cottages.
It will be nice when you don't have to worry about them any more. 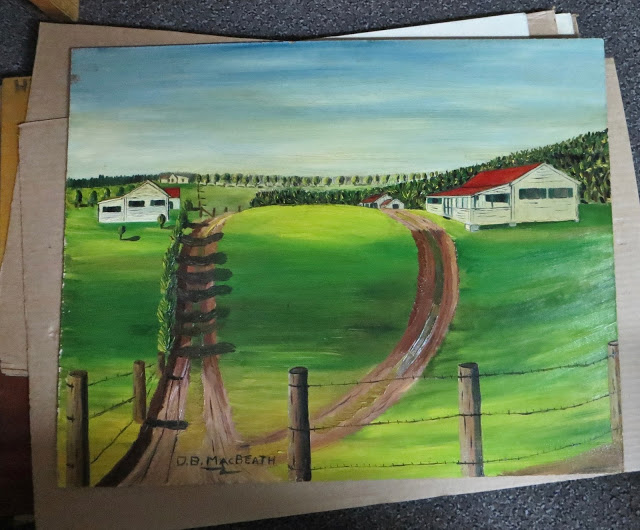 When we are at Sioux Lookout, it will be much easier for you to come to visit us;
and in time, perhaps, we will be in Ottawa which would be nearer.

I imagine everyone will be going home to the Island
for the summer now, and you will be seeing Barbara.
It was so nice of her to come to the station to see us.
I only wish we had had more time to visit with her.

There is so much writing to do for mail day.
I will be glad when we reach Sioux Lookout,
so at least I won't have to worry about the weekly order.

Here if you forget something, it's just too bad for you,
because more than likely you can't get it at the Bay.

You have to make bread because you can't count on them
having any, and it's a drag.
I don't know why, except I'd rather do a big wash.

I guess it's you can get at a wash and get it done,
but bread you can only do in stages.
It tastes good though, and everyone insists I'm going to have to keep it up.
Personally I think once a month will be fine. 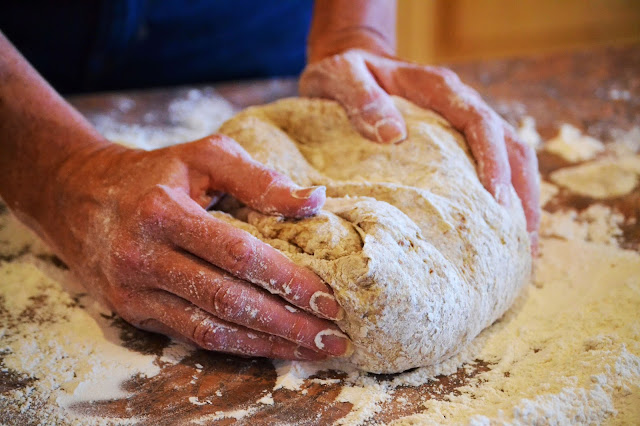 It's so very beautiful here now.  The trees are all in leaf now,
and the water is usually just like a mirror
reflecting all the  islands, and there are dozens of them.

The grass is all green, and there are all kinds of birds.
The children are bringing in all kinds of flowers, some I've never seen before.
There are some that look like lilies of the valley, but don't smell like them.
Then there are little pink ones that grow in clusters,
and some form of a bluebell.
I must get out for a walk before we leave,
so I can see some of them growing.

With Love to you and Aunt Maude,
Sara. 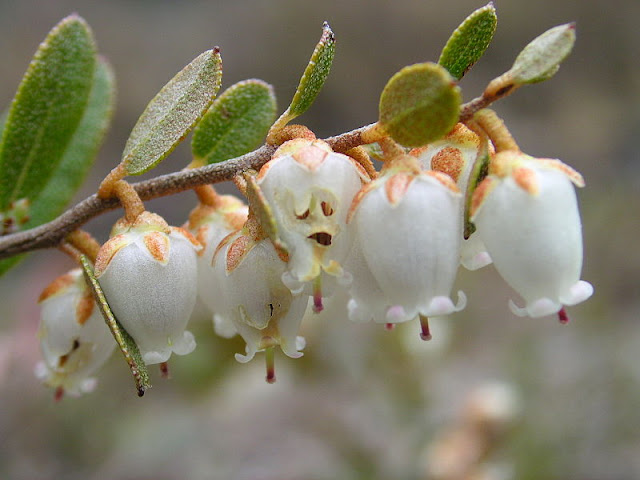 I'm not sure my mother ever took that wildflower walk.
We could not imagine the abrupt and unexpected
twist of fate our lives were about to take. 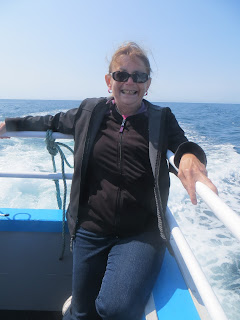 
Notes:
1.  Macbeth and MacBeath:
Maureen chose Shakespeare's tragedy Macbeth because I am a MacBeath (pronounced
"Macbeth"), and I was thrilled to hear the dramatization of the life of a Scottish king
whom we always joked was our only claim to Royal blood.


2.  Apartments and Cottages:
Nana had recently sold her apartment building in Charlottetown, Prince Edward Island,
and was in the process of selling their summer cottages in Brighton, just outside the
city.

3.  Barbara Pratt:
The Barbara my mother referred to was the daughter of Nana's brother Chester Pratt.  My father
was fond of his first cousin and named my sister Barbara after her.  When we moved North,
Barbara Pratt came from Peterborough to Montreal to meet us before we boarded the train to
Nakina (likely Montreal).  Barbara would be going home to St. Peter's Bay on the "Island" which
is how all Islanders referred to Prince Edward Island. 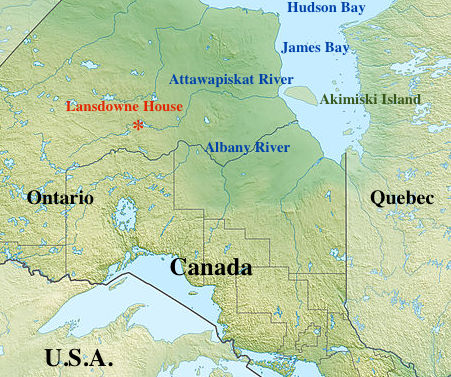