What the Hell? Who am I?

Months ago I spit into a small, screw-topped vial
containing a preservative solution and sealed it in a small box.
Then I chased down the receding mail truck and handed it to our mail lady.
It took a long time for Ancestry to analyze my results,
and when they arrived, I was shocked.
Let me tell you right up front that I'm not adopted, illegitimate, or have unexpected siblings,
but my results convulsed my cherished family tree and made me question who I am. 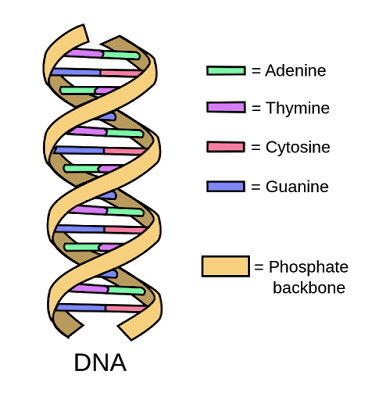 This wasn't the first time I had my DNA analyzed.
Since I couldn't contribute to the gene pool by having children,
I thought the least I could do was participate in Phase Two
of National Geographic's Genographic Project, Geno 2.0.
The Genographic project was an exciting and ambitious attempt
to determine our human origins and to trace our migrations as we populated the earth.
How could I not contribute my DNA to the effort to map humankind's genetic history?
Almost half a million people from more than 130 countries
participated in the first phase of the  Genographic Project.
This provided an unprecedented look into humankind's journey.
The second phase, Geno 2.0, provided deeper insight into our genetic history
by examining DNA samples for nearly 150,000 DNA identifiers or markers.
These markers revealed rich ancestry-relevant information.
(Source:  National Geographic booklet Geno 2.0:  Your Story.  Our Story.  The Human Story.)
By the time National Geographic retired its Genographic Project,
1,006,542 individuals in over 140 countries had participated in the project.
Individuals were classified by "assessing their proportions
of genomic ancestry related to nine ancestral regions:
East Asian, Mediterranean, Southern African,
Southwest Asian, Oceanian, Southeast Asian,
Northern European, Sub-Saharan African, and Native American."  (Wikipedia)
I'll bet many people like me were most curious about their individual origins. 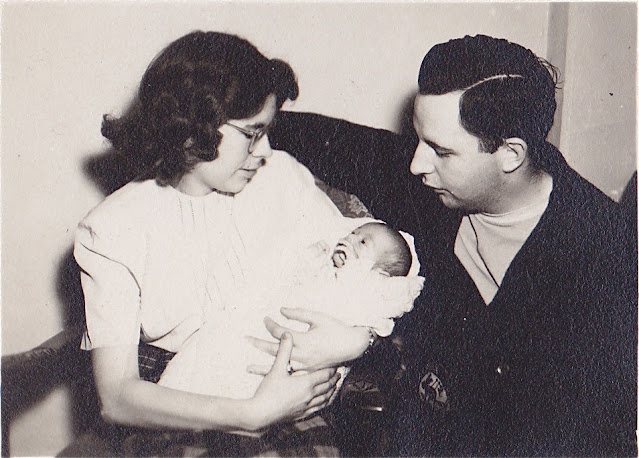 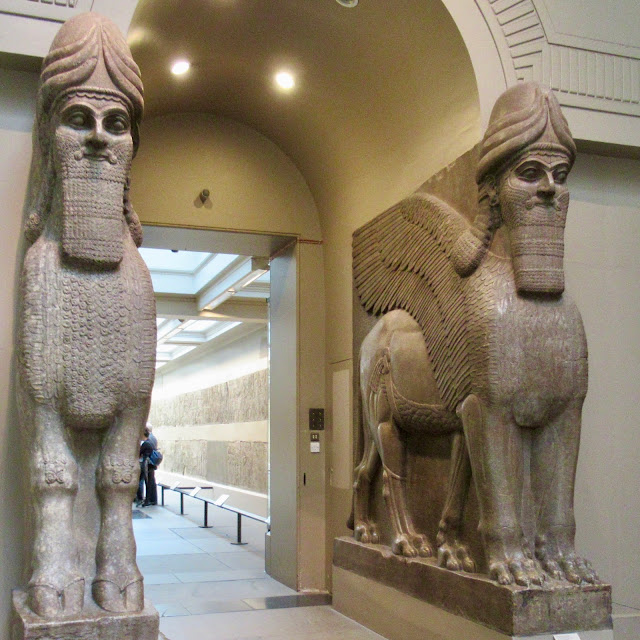 Ancient Nimrod in Assyria Beckons
British Museum, London, UK
September 10, 2018
© M. Louise (MacBeath) Barbour/Fundy Blue
All Rights Reserved
As you may know, all living women have a direct maternal ancestor
who was born some 180,000 years ago in East Africa.
Mitochondrial Eve is the root of the human family tree,
and she generated two lineages known as L0 and L1'2'3'4'5'6.
Each lineage has a different set of genetic mutations that its members carry.
Eventually the L1'2'3'4'5'6 lineage produced the L3 Branch
on our common family tree about 67,000 years ago.
While many L3 members stayed in Africa, some dispersed in different directions.
My distant L3 ancestors migrated north and were the first modern humans to leave Africa.
They created two macro-haplogroups (M and N) that populated the rest of the world.
Basically a haplogroup is an ancestral clan that tells
where your ancestors came from deep in time. Ancestralfindings.com
At the risk of over-simplifying very complicated
and sometimes controversial migration patterns,
I'll generalize that the Macro-haplogroup M Branch wandered east throughout Asia
and the Macro-haplogroup N Branch wandered north into Europe. 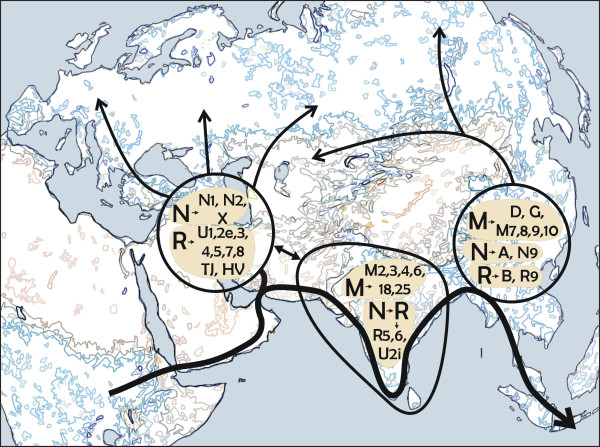 The Peopling of Eurasia
Wikimedia

My "ancestral clan," the western Eurasian N Branch,
migrated across the Sinai Peninsula about 60,000 years ago,
having followed the Nile basin out of Africa,
likely because of its reliable water and food resources.
They probably co-existed with other hominids in the eastern Mediterranean region
and western Asia, such as the Neanderthals, hence my 2.0% Neanderthal DNA.
Thousands of years later, descendants of my N Branch group followed migrating herds
into unexplored territories surrounding the Middle East.
Eventually they roamed north out of the Levant, crossed the Caucasus Mountains,
arrived in southeastern Europe and the Balkans,
and went on to populate the rest of Europe.
Of course, I had to have a complication in my family tree, the R Branch.
This group, dating back to 55,000 years ago, migrated all over the place
including into areas where the N Branch roamed.
In all likelihood, the N and R lineages radiated out of the Near East together,
and geneticists are currently trying to sort out the tangled mess.
About 41,000 years ago, descendants of my R Branch formed the RO Branch,
a group that lived throughout West Asia.
Descendants of my RO Branch gave rise to my ancestors, the pre-HV Branch.
Its members lived around the Red Sea and throughout the Near East,
with its highest numbers in Arabia.
Over several thousand years, my pre-HV ancestors gave rise to
the HV Branch, a west Eurasian haplogroup found in Turkey,
the Caucasus Mountains of southern Russia, and the Republic of Georgia. 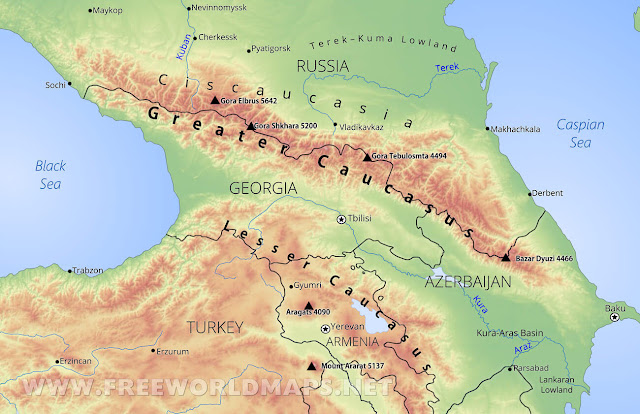 Caucasus Mountains
Freeworldmaps.com
My H Branch of ancestors descended from my HV Branch about  28,000 years ago,
and it washed into western Europe as a wave of migration,
bringing with it significant innovations in tool making, preparing skins, and woodworking.
Around 15,000 to 20,000 years ago, my H Branch of ancestors
retreated into the Iberian Peninsula, Italy, and the Balkans
because colder temperatures and a drier global climate caused the last Ice Age.
After the ice sheets began their retreat about 15,000 years ago,
my ancestors quickly moved north again and recolonized western Europe.
National Geographic indicated that the highest percentage of the H Branch
currently found in Europe is in Ireland where the line makes up 61% of the population. 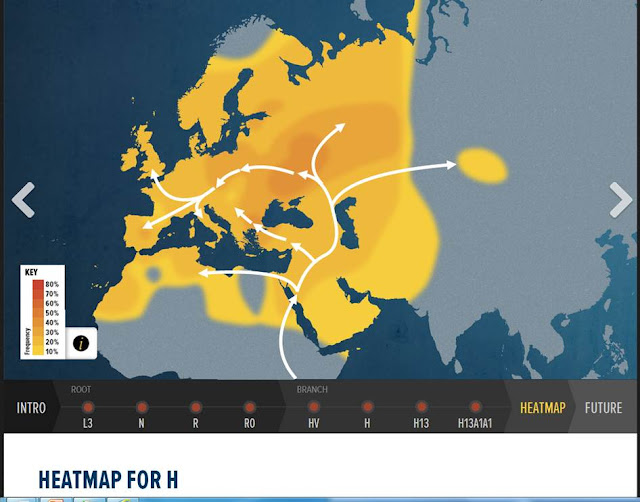 Somewhere among my rambling deep ancestors, I picked up 1.4% Denisovan DNA.
According to history.com, "Modern humans and Denisovans likely met
for the first time in Eurasia some 40,000 to 60,000 years ago,
after Homo sapiens began their own migration out of Africa."
As for those shocking Ancestry DNA results?
Throughout my life I have proudly proclaimed my Scottish ancestry
on both sides of my family, MacBeath and MacDonald.
My family's clan connections could people a Roll Call of the Clans
at the Antigonish Highland Games in Nova Scotia,
the oldest continuous highland games outside of Scotland.
Somewhere a smidgen of French and Dutch snuck in.
The ancient home of my MacBeath ancestors
is the western coast of Scotland and the Hebrides Islands. 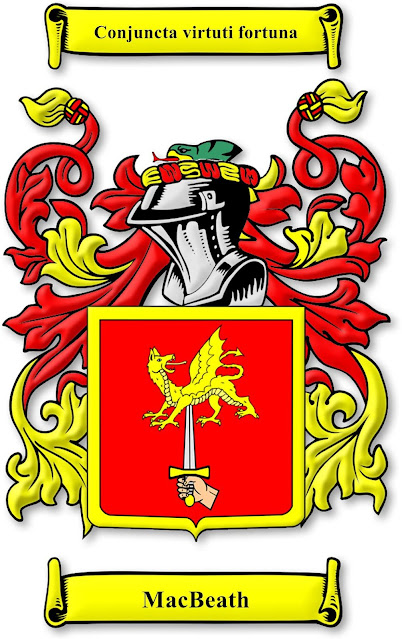 Motto: Conjuncta virtuti fortuna
Motto Translation: Good fortune is allied to bravery
House of Names
The ancient home of my MacDonald ancestors
is the west highlands of Scotland and the Hebrides Islands. 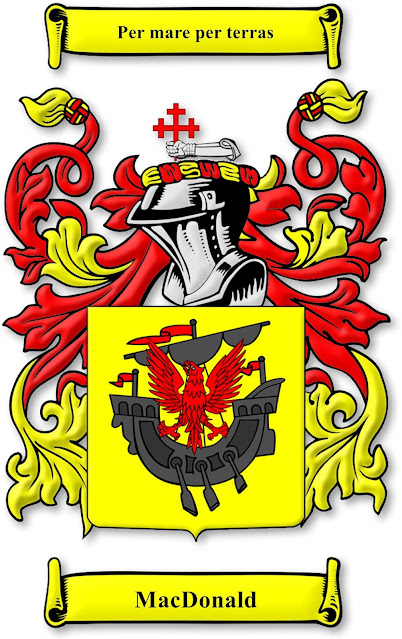 Motto: Per mer per terras
Motto Translation: By land by sea
House of Names
I'll spare you the rest of my Roll Call of the Clans!
Well, my shock is that I'm only 49% Scottish!
Those ancestors DO hail from the Scottish Highlands and Islands,
the outer Hebrides, and the Isle of Skye.
But Ancestry indicates that I'm 41% Irish!
The news convulsed my cherished family tree.
Who the hell am I?
Someone close to me has been chortling
there was a leprechaun in the woodpile somewhere in my past.
(And that someone is definitely Irish.) 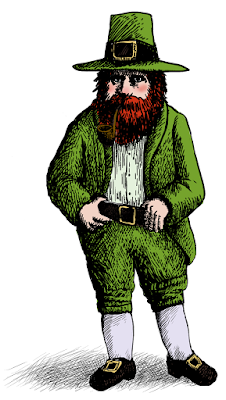 The remaining 10% of of my ethnicity includes
5% from Northwestern Europe, 3% from Germanic Europe, and 2% from Norway.
I broke the news to my siblings:
Donnie, I have shocking news...
Bertie, I have some shocking news, shocking to me, maybe surprising to you...
Barb, I have news that's going to shock you...
Roy, sit down.  I have bad news...
Wow!  It didn't rock their worlds like it rocked mine.
Not even my brother Royal Stewart MacBeath.
Barb and I got into a heated debate
over the origin of the leprechaun in the woodpile.
I'm going with our Grandfather MacDonald's line.
She's going with our Great Grandfather Pratt's line.
Barb's going to have her DNA done by Ancestry too.
She suggested that perhaps she and the rest of my siblings
have different DNA from mine, more Scottish.
I reminded her that she's the one who's been nicknamed the Milkman's Daughter.
She says she's a throwback to the Pratts and that my Scottish genes
were altered by the survivors of the shipwrecked Spanish Armada.
Aren't sisters fun?
But we come by our vigorous discussions legitimately.
I'll never forget my mother firing a raw egg at my father,
because he was singing "The Campbells Are Coming" to tease her.
I think it was his line, "The Campbells are coming, MacDonalds are running,"
that prompted the egg splattering on her target.
A little later we all sat down for a peaceful scrambled egg breakfast,
although my father couldn't resist humming a few provocative bars here and there.
I wonder what my parents would think about potential Irish origins? 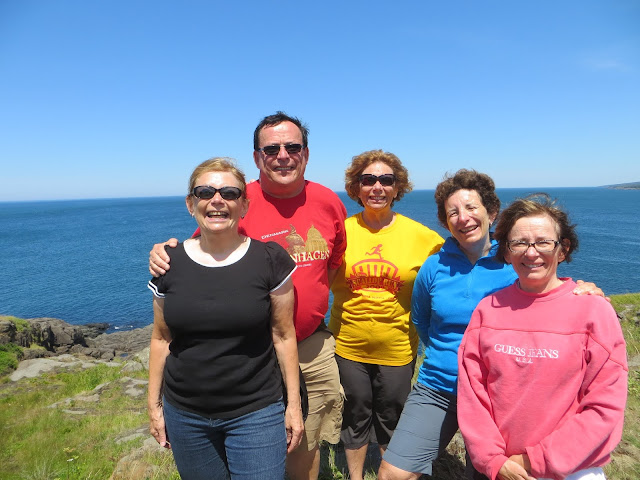 We Five
Louise (Me), Roy, Barb, Donnie, and Bertie
Boar's Head Lighthouse, Tiverton, Nova Scotia
August 3, 2015
© M. Louise (MacBeath) Barbour/Fundy Blue
All Rights Reserved
This ancestral setback of mine bears digging into.
I'll keep you posted (depending on what I find out ~ LOL!) 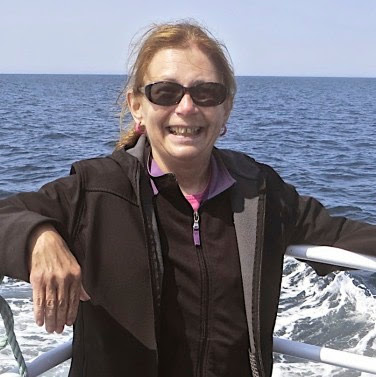 Email ThisBlogThis!Share to TwitterShare to FacebookShare to Pinterest
Labels: Ancestors