Hey!  June has been crazy~busy,
so I was unable to get out to take pictures
for the June Scavenger Hunt.
(I do have photos for the hunt though!)

I did, however, have a chance late at night,
to read John Shors' extraordinary and beautiful book
called Temple of a Thousand Faces.


It's set in Cambodia beginning in 1177
during the life of Jayavarman VII before he reigned as king of the Khmer Empire from 1181-1218.

The story unfolds as the Cham successfully invade Cambodia and "Jayavar" tries to free his people
from the brutal Cham occupation.

The Cham are an ethnic group in Southeast Asia
whose descendants today are found mainly
in the Kampong Cham province in Cambodia
and in central Vietnam.


I was fortunate to travel to the Kingdom of Cambodia
several years ago with my husband Terry in November of 2008.


Our guide was a remarkable young woman named Soluy Loeurt.

In a few long days Soluy shared her passion
for her incredibly beautiful people and country
with Terry and me.

Soluy also taught me how
to use my first and new digital camera.
We shared many laughs
over this new digital adventure for me.
It is my hope to return to Cambodia
and spend time with Soluy at the school where she teaches.

So I hunted through my Cambodian photographs
using June's scavenger list to share some of our memories.
(Sorry if I broke any rules for the scavenger hunt!) 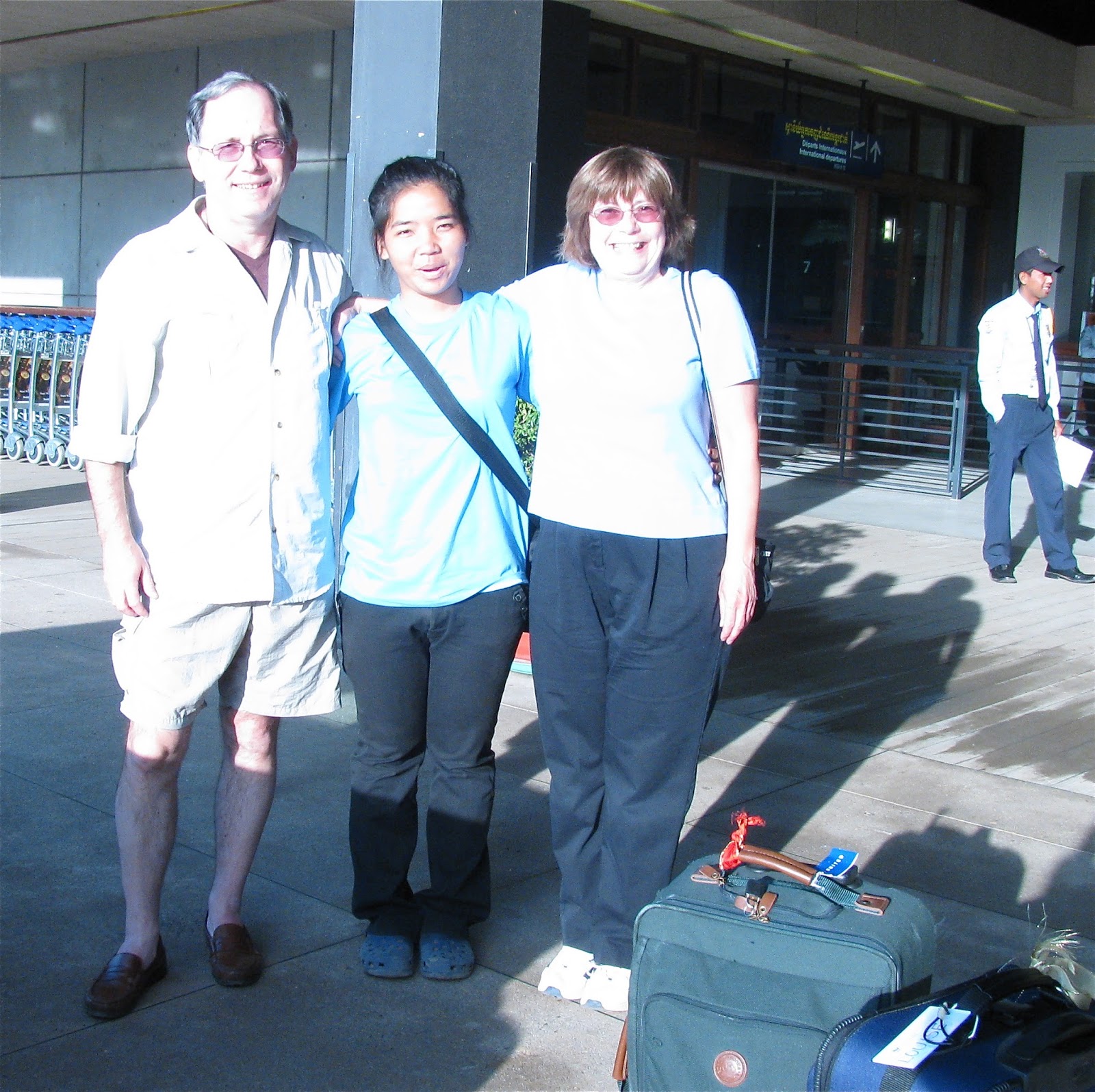 Terry, Soluy, and I at the Siem Reap International Airport
just before departing from the Kingdom of Cambodia.


Thanks to Jill
and her Made with Love blog
for setting up the hunt. 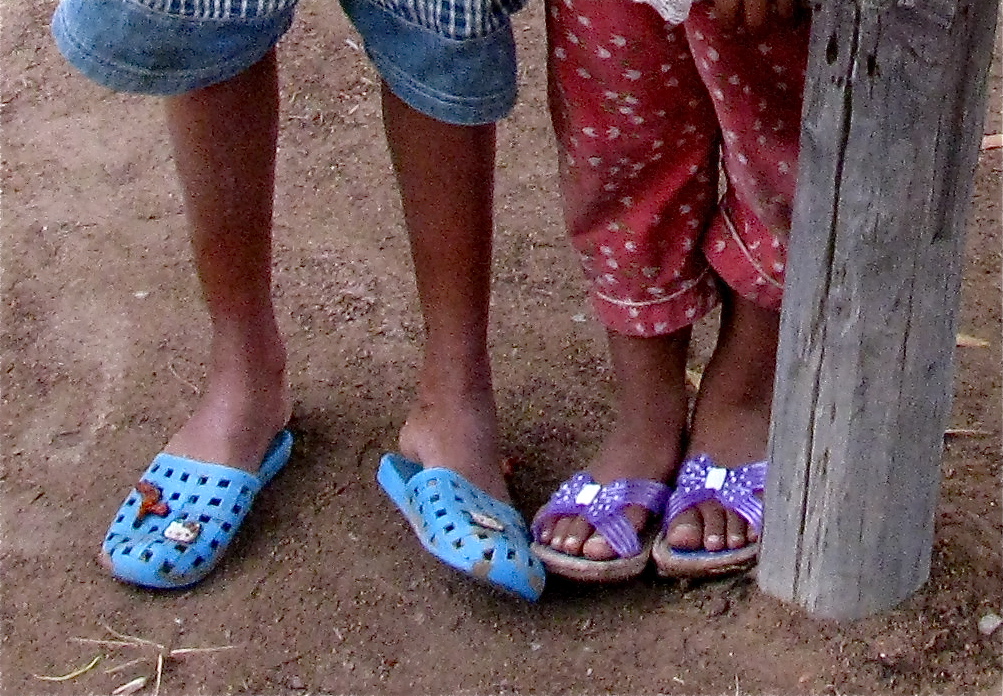 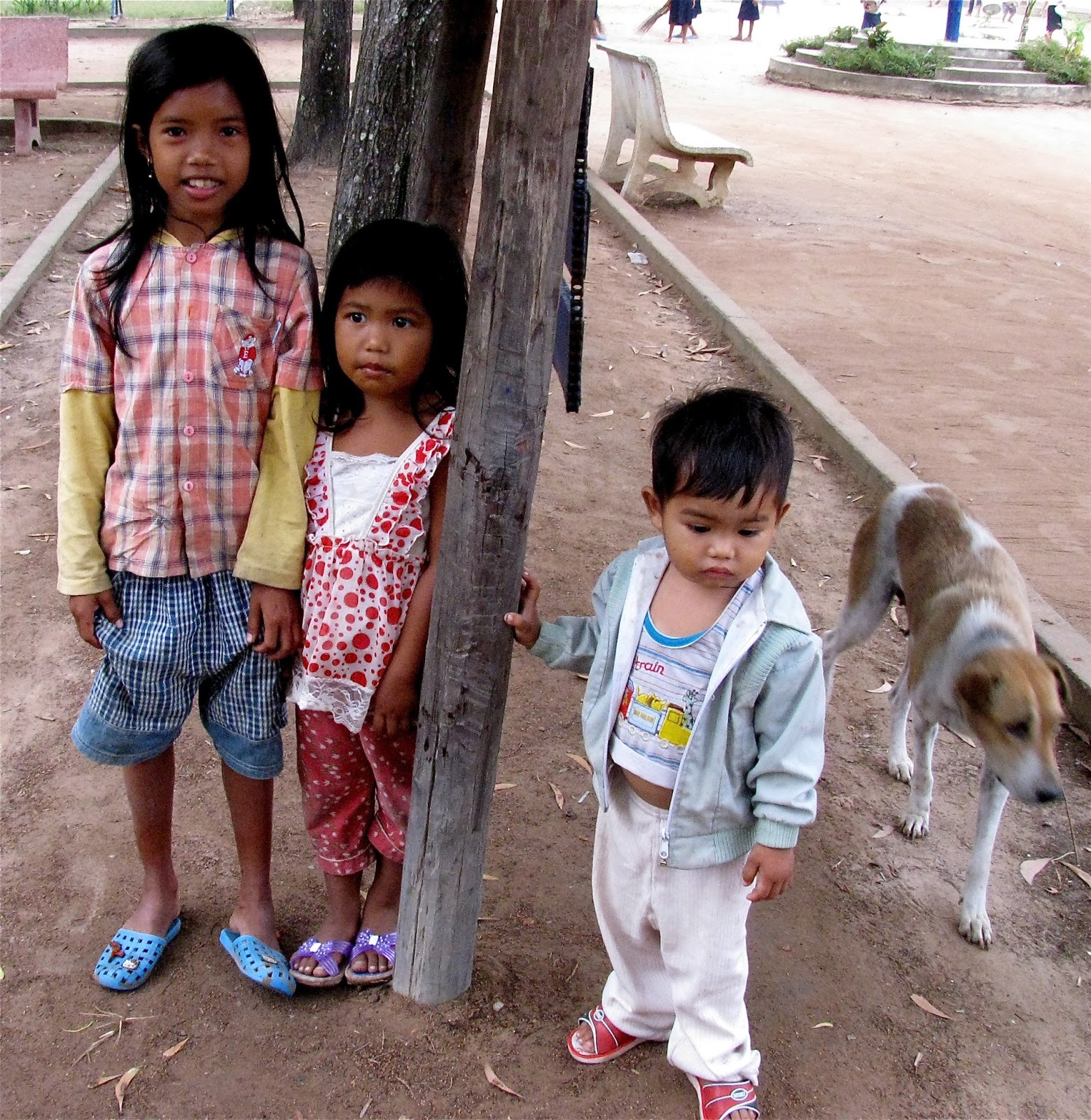 Surely there are no more beautiful faces in the world
than the faces of children.
Although dogs can't be too far behind! 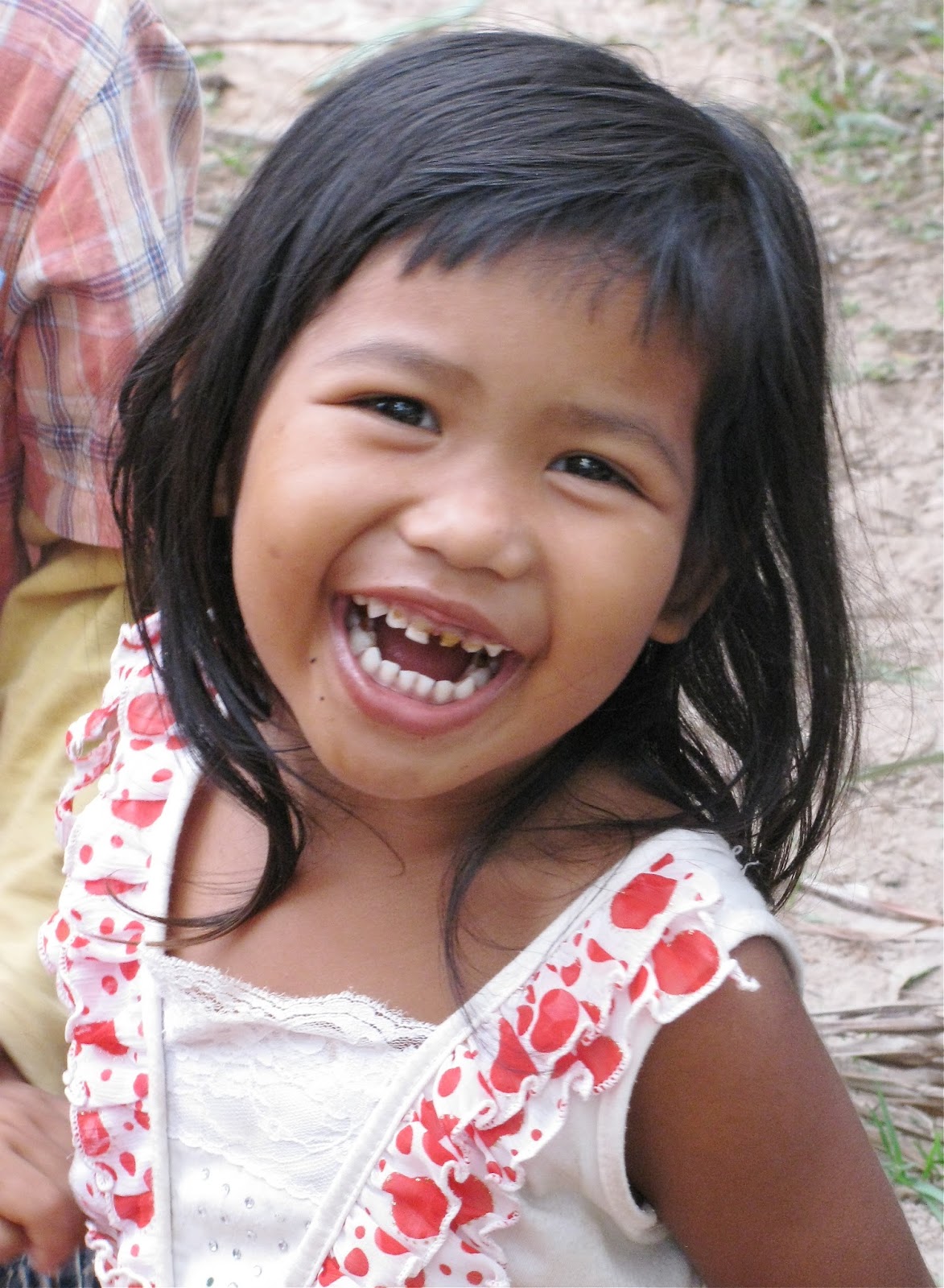 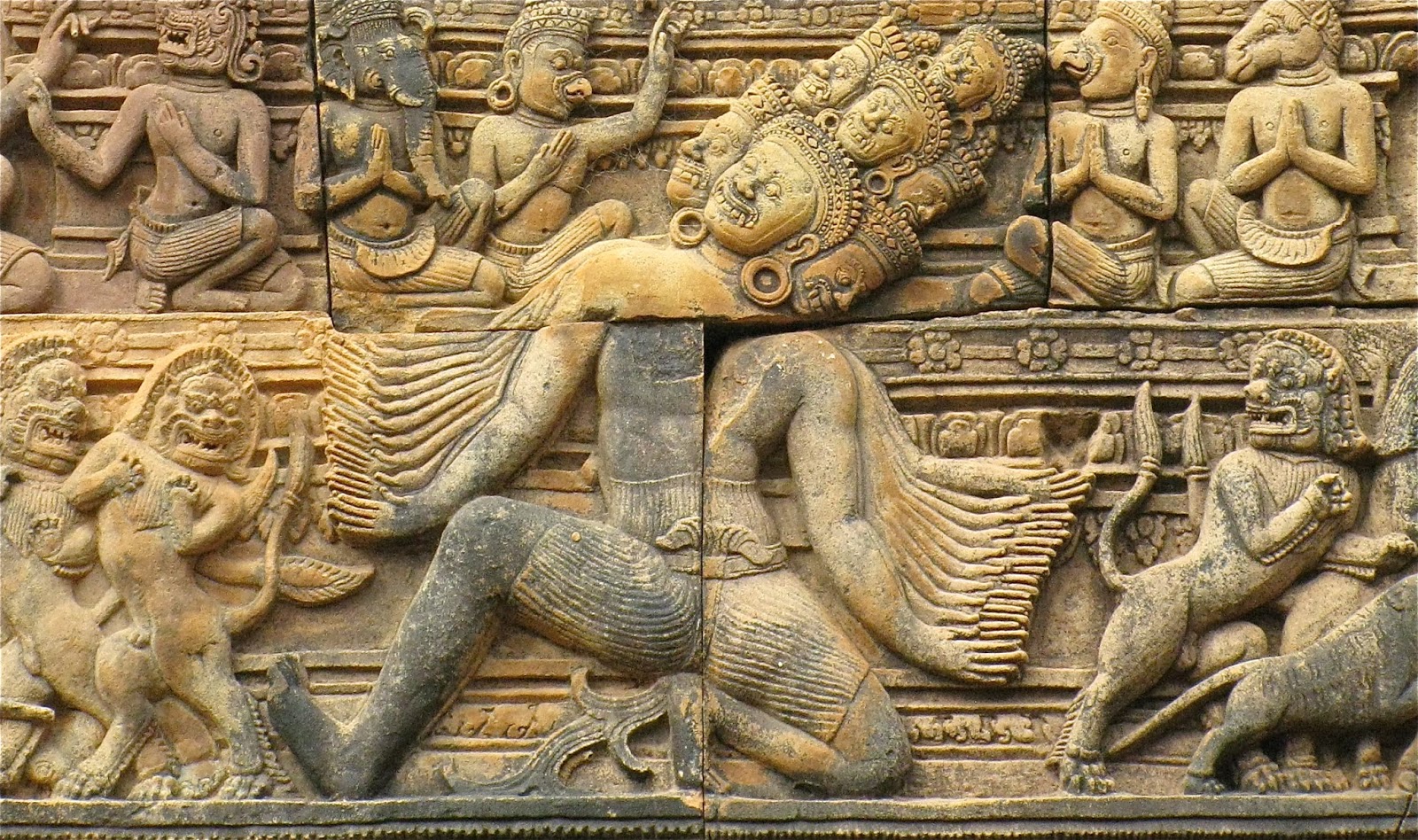 This image of the Hindu demon Ravana
has at least sixty fingers and thumbs.

The photo above was cropped from my full photo below.
The full photo is of the east-facing pediment of the southern library of Banteay Srei in Cambodia.  "A pediment is an architectural element that is triangular and supported by columns above a doorway or opening."  Source: Supreme Master Television 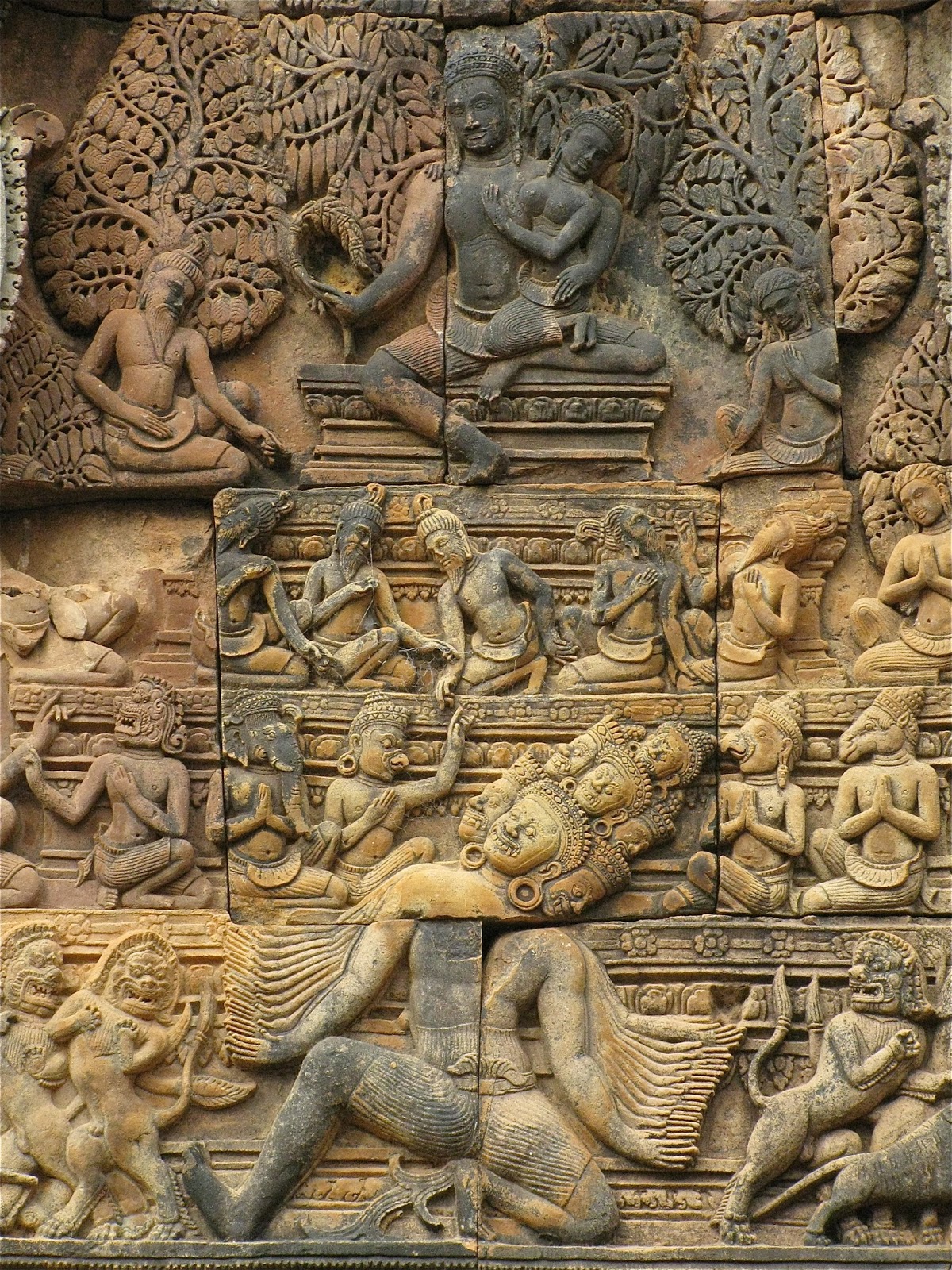 Pediment:  Shiva seated on Mount Kailasa trapping the demon king Ravana and stopping him from shaking the mountain.
Source:  Wikipedia

Banteay Srei is a Cambodian temple
built in the 10th century and located in the area of Angkor.
It is dedicated to the Hindu god, Shiva.
The temple is considered to be the jewel of Khmer art.  Source:  Wikipedia 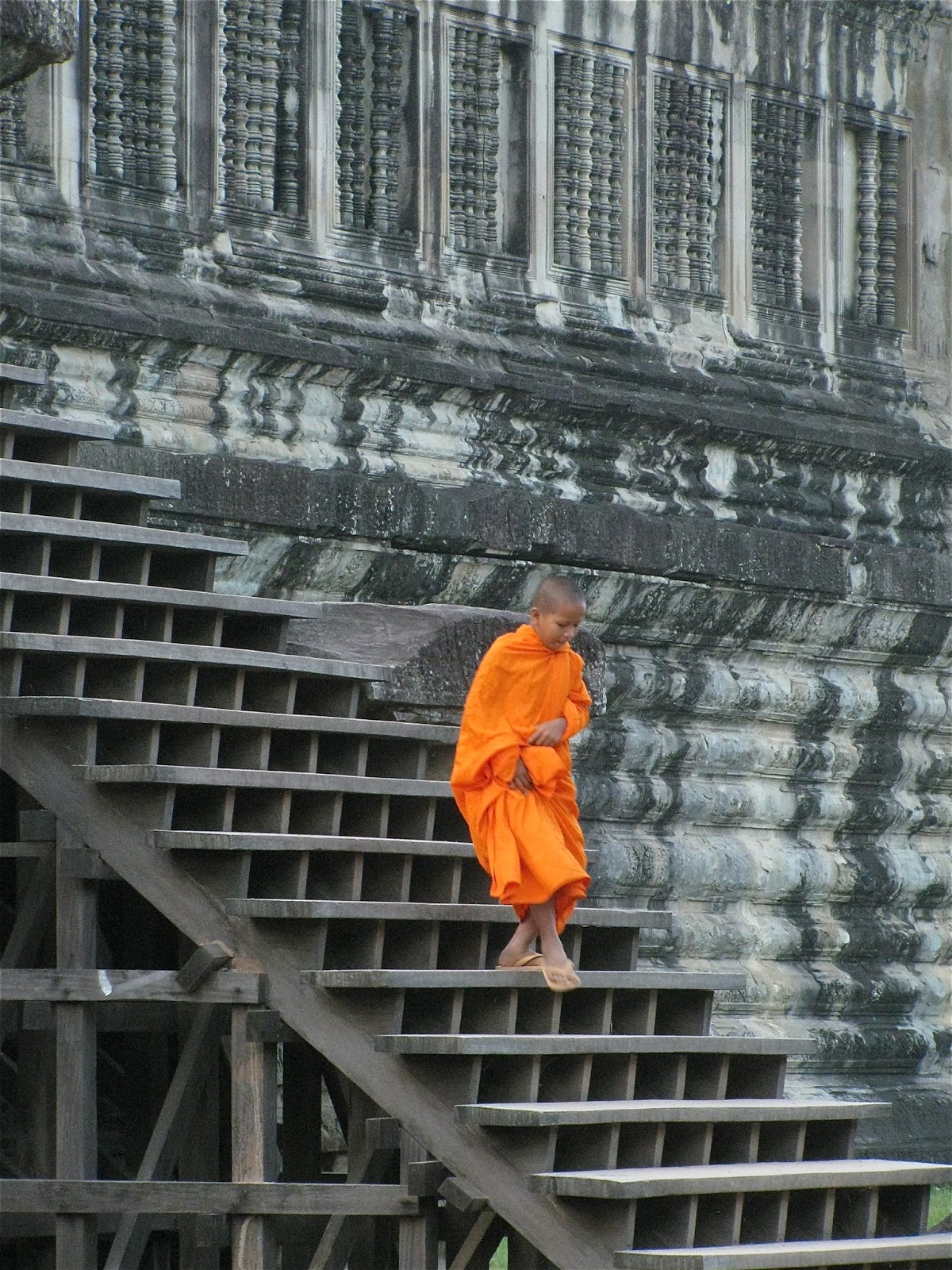 A little monk running down stairs
in Angkor Wat, Cambodia. 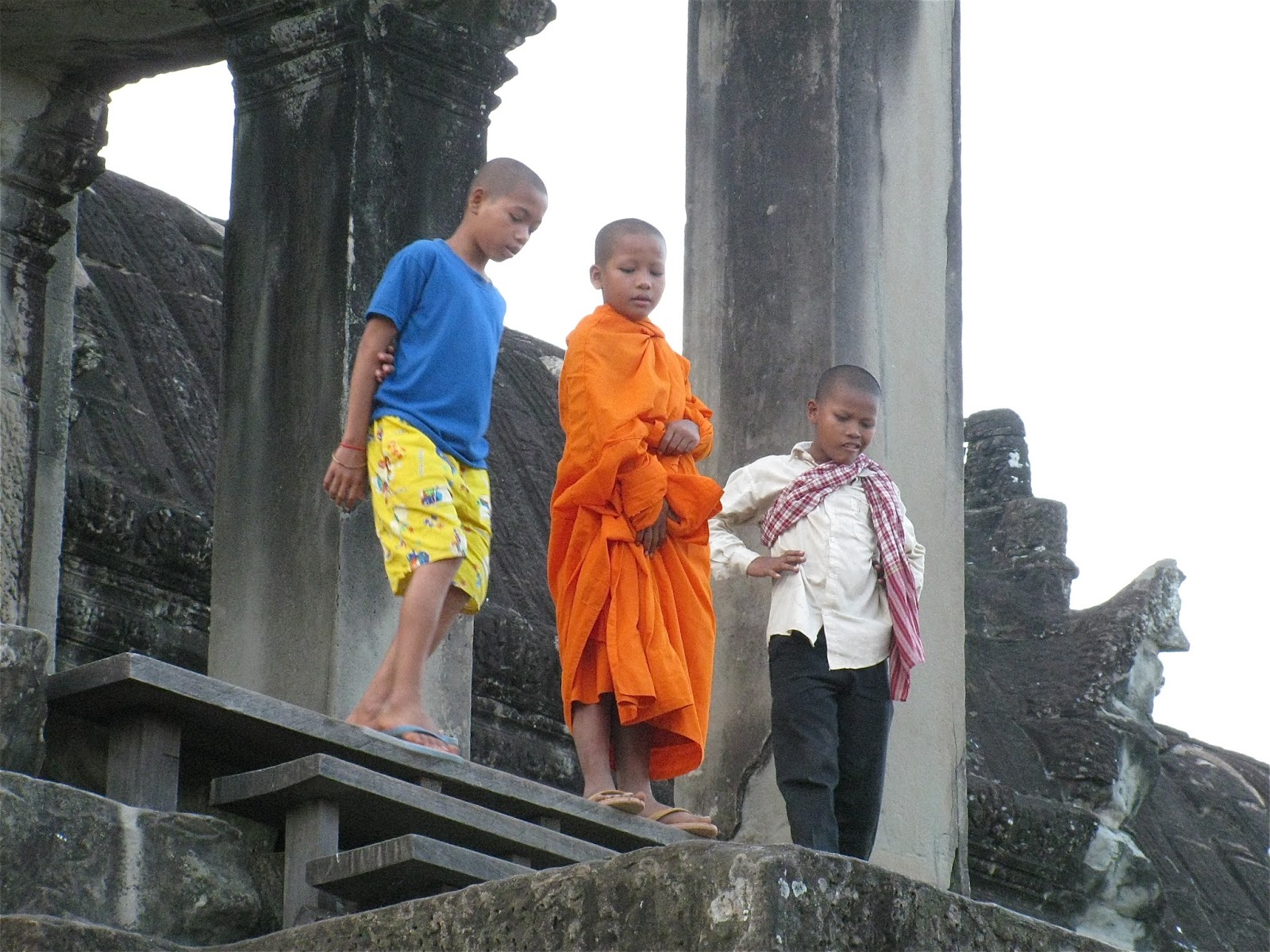 Same little monk with his little buds moments before. 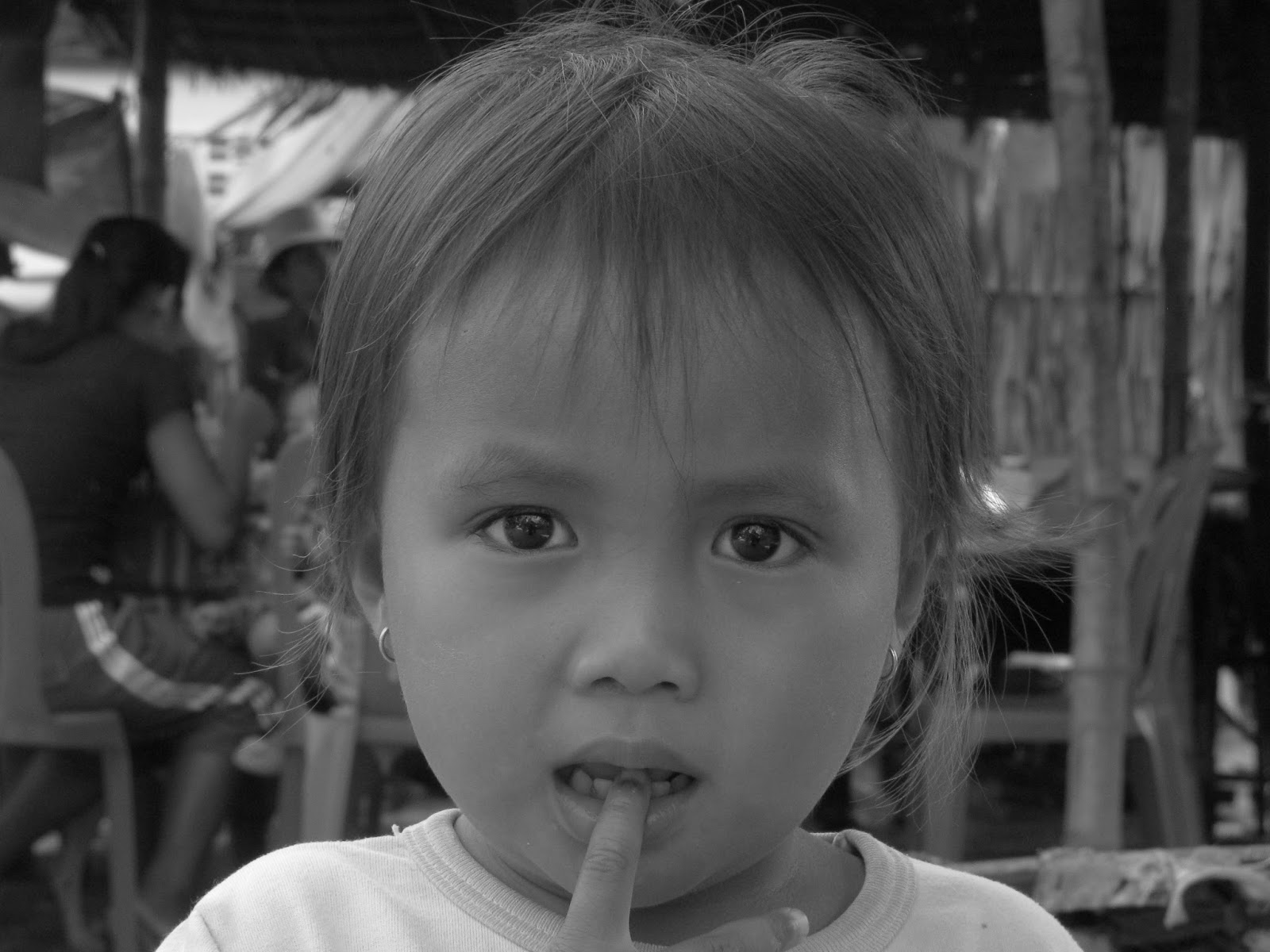 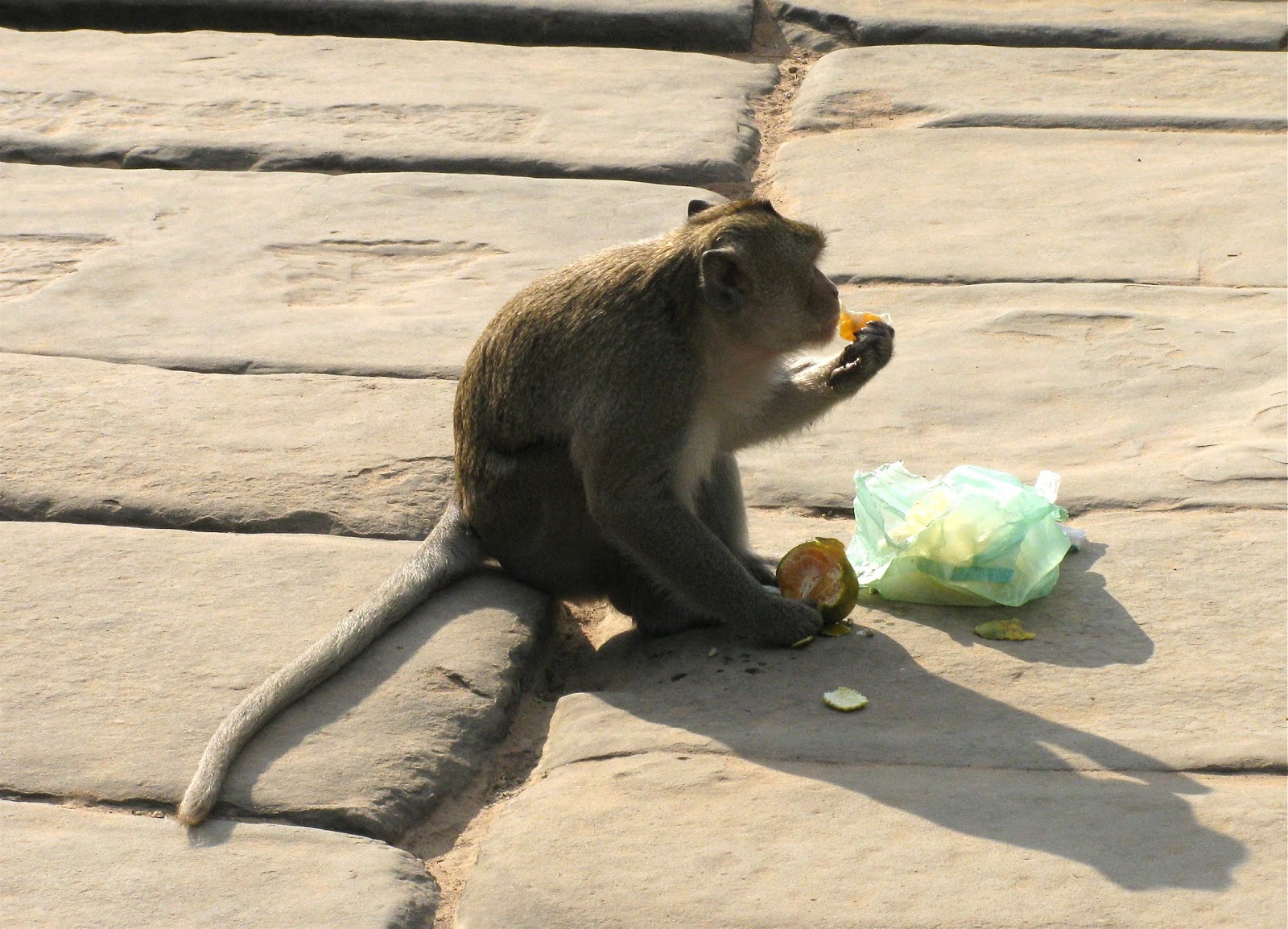 Monkey on the sandstone causeway
leading to the west and main entrance of Angkor Wat
near Siem Reap, Cambodia


Just for fun I have included a photo of an animal I find fascinating:
Asian elephant with his malmout (and me), Cambodia. 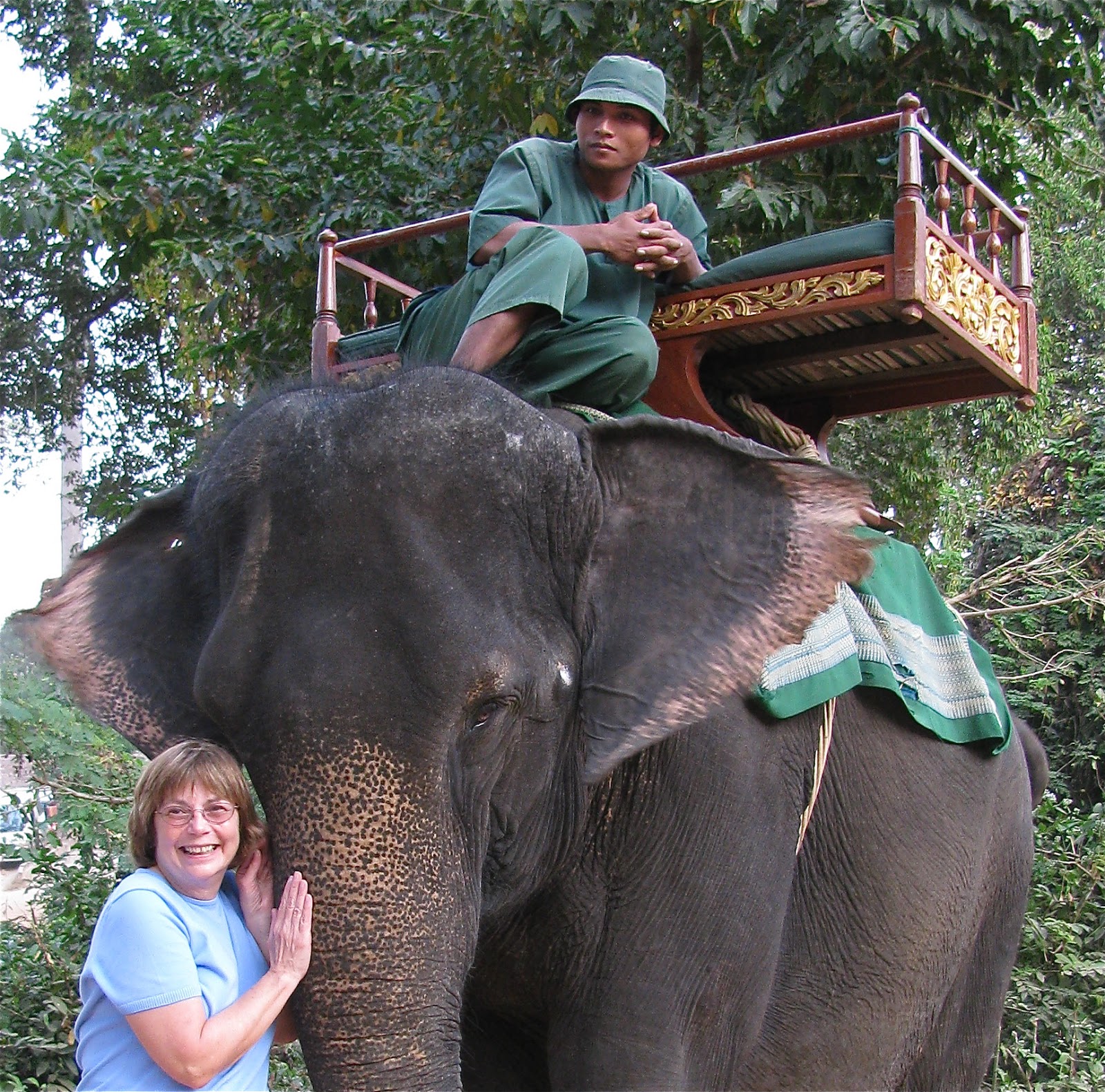 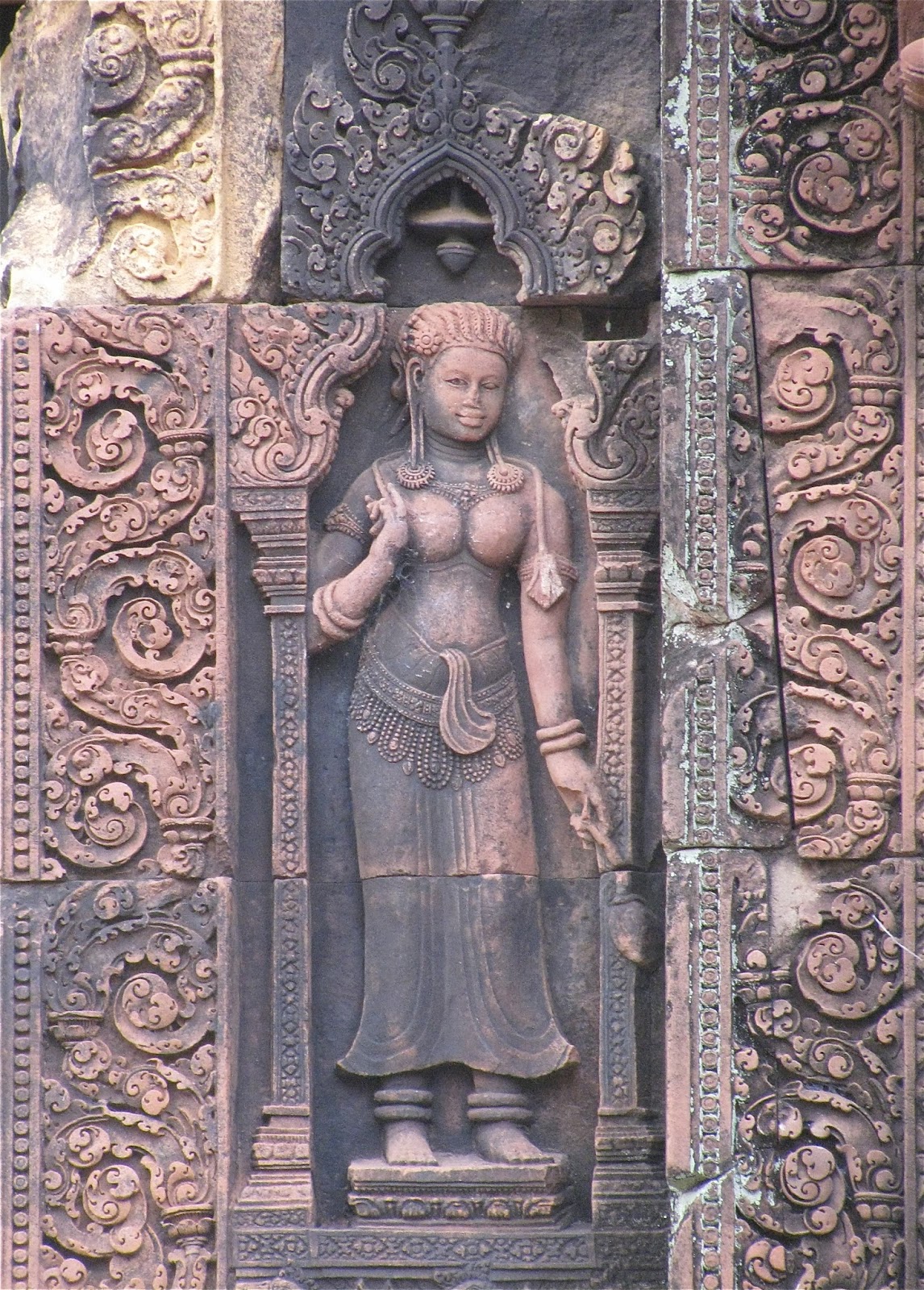 Banteay Srei means Citadel of Women or Citadel of Beauty.
Devatas and apsaras are pictured
on many architectural details in Banteay Srei.
A devata is a minor female deity in Indian mythology
often depicted standing.
An apsara is a celestial dancing girl in Indian mythology
often depicted dancing.
Devatas along with apsaras
are common motifs in Khmer art
decorating temples and other religious buildings in Cambodia.    Source:  Wikipedia 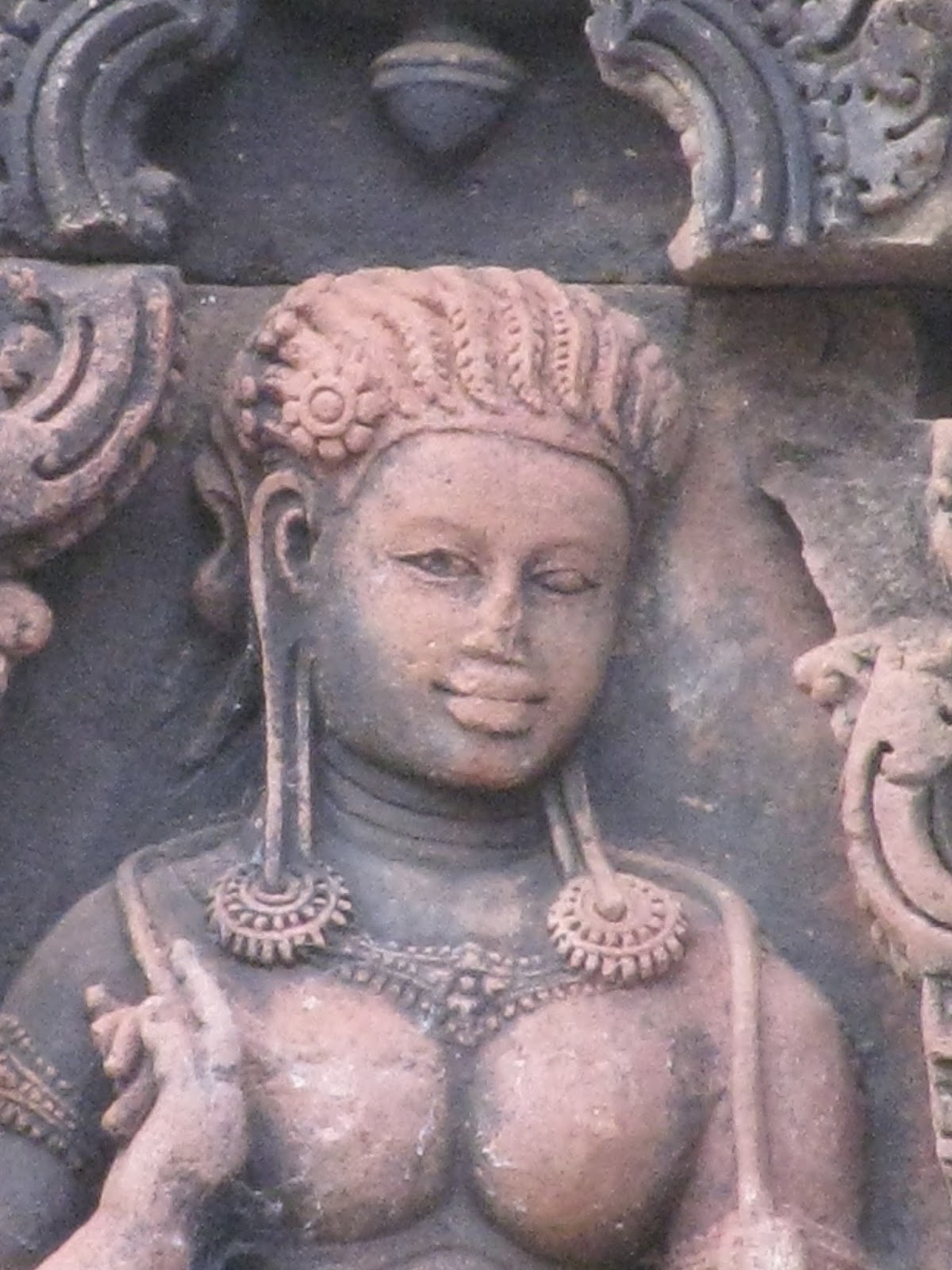 Closeup of the Devata's Face 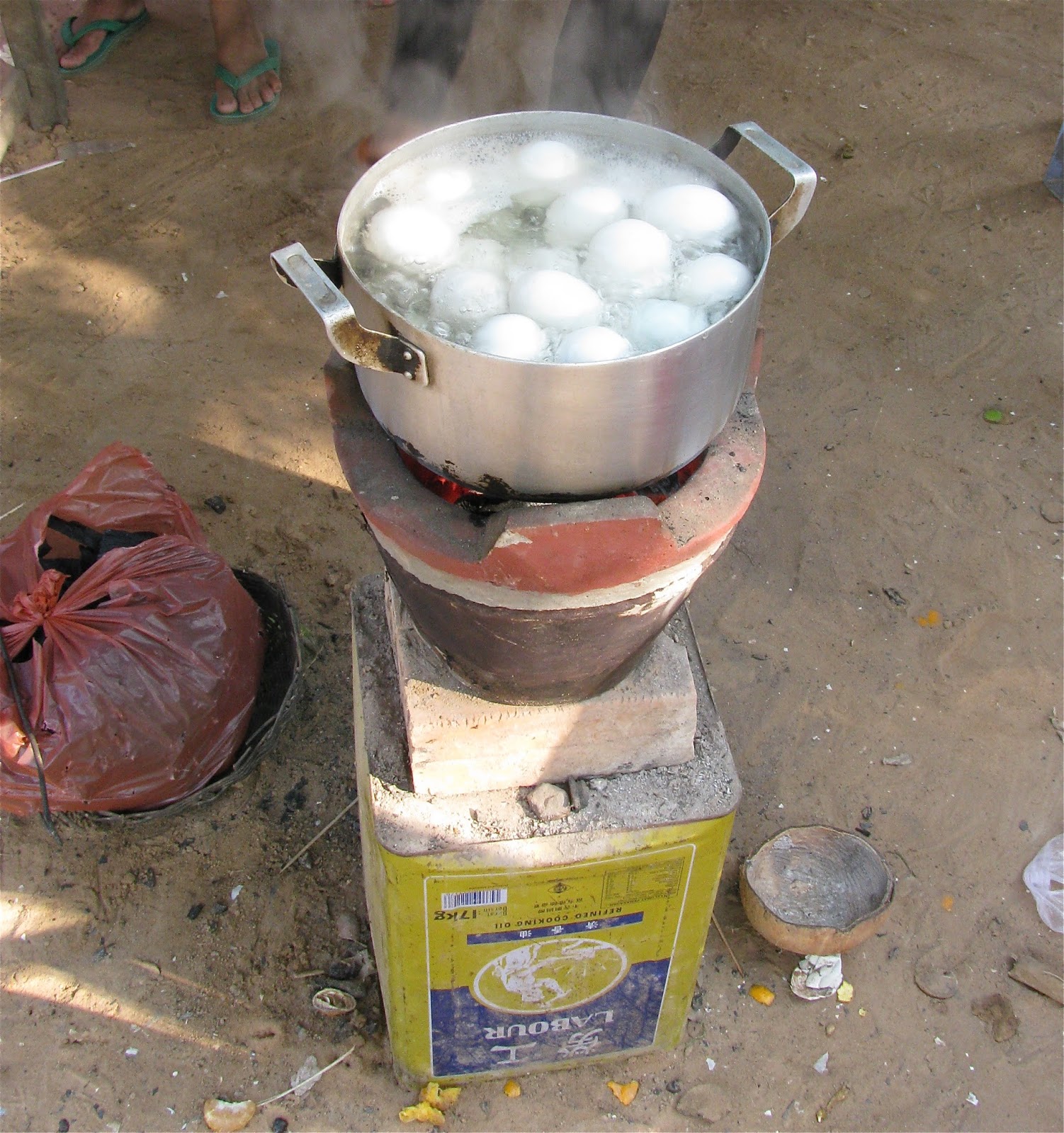 These duck eggs are boiling in a pot
sitting on a ring above container of fire.
Local country market near Siem Reap, Cambodia. 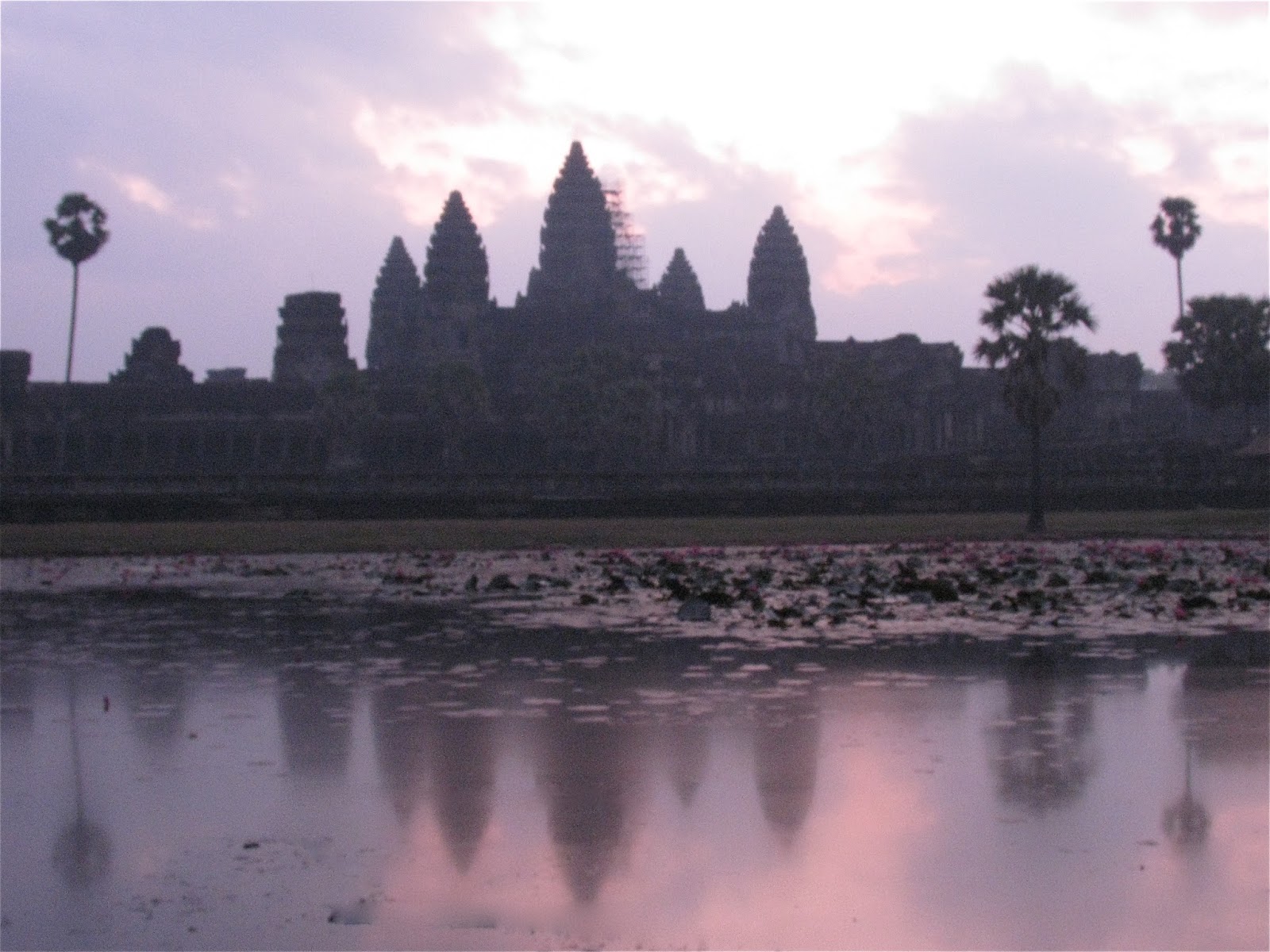 Angkor Wat at Sunrise
viewed from the northern reflecting pool 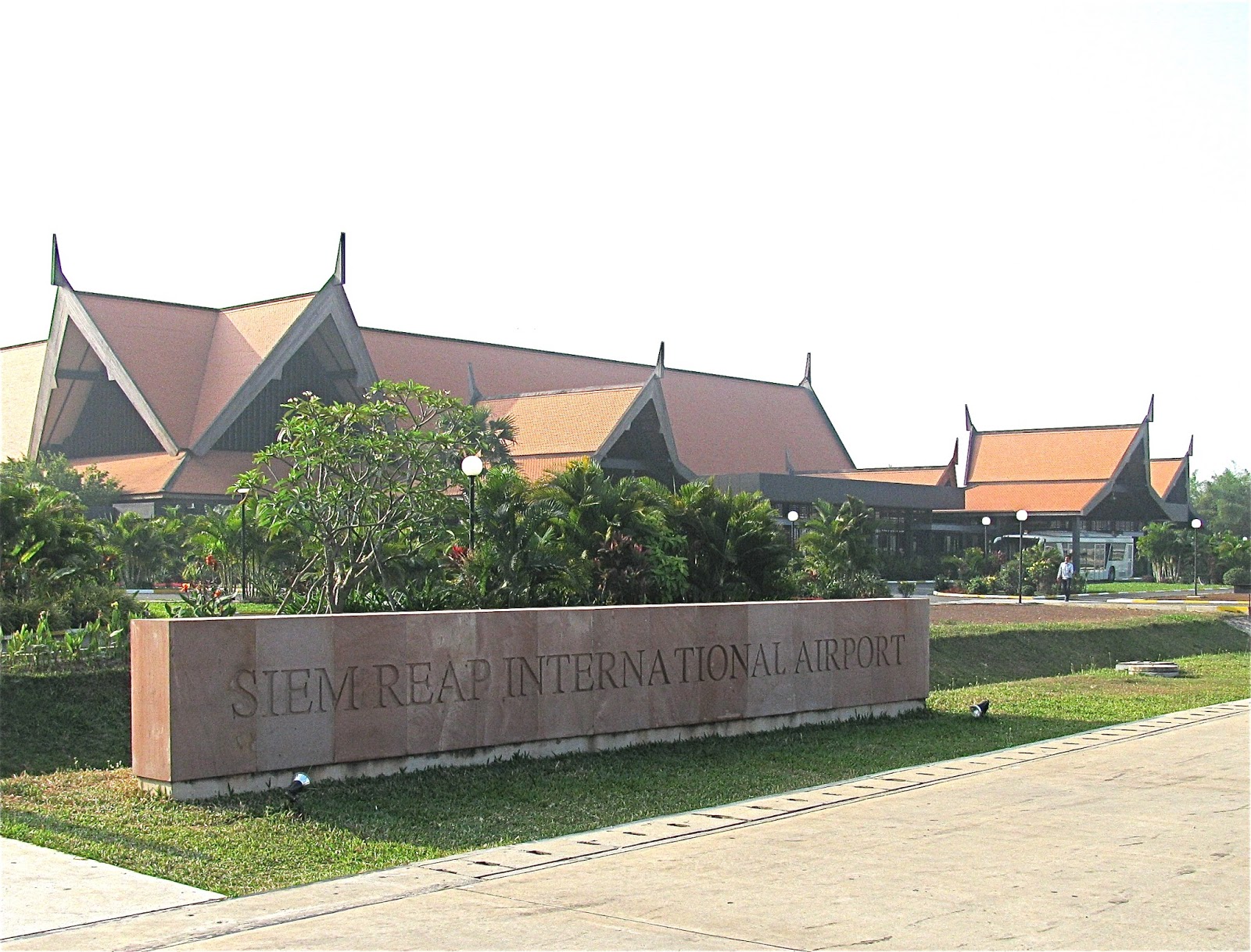 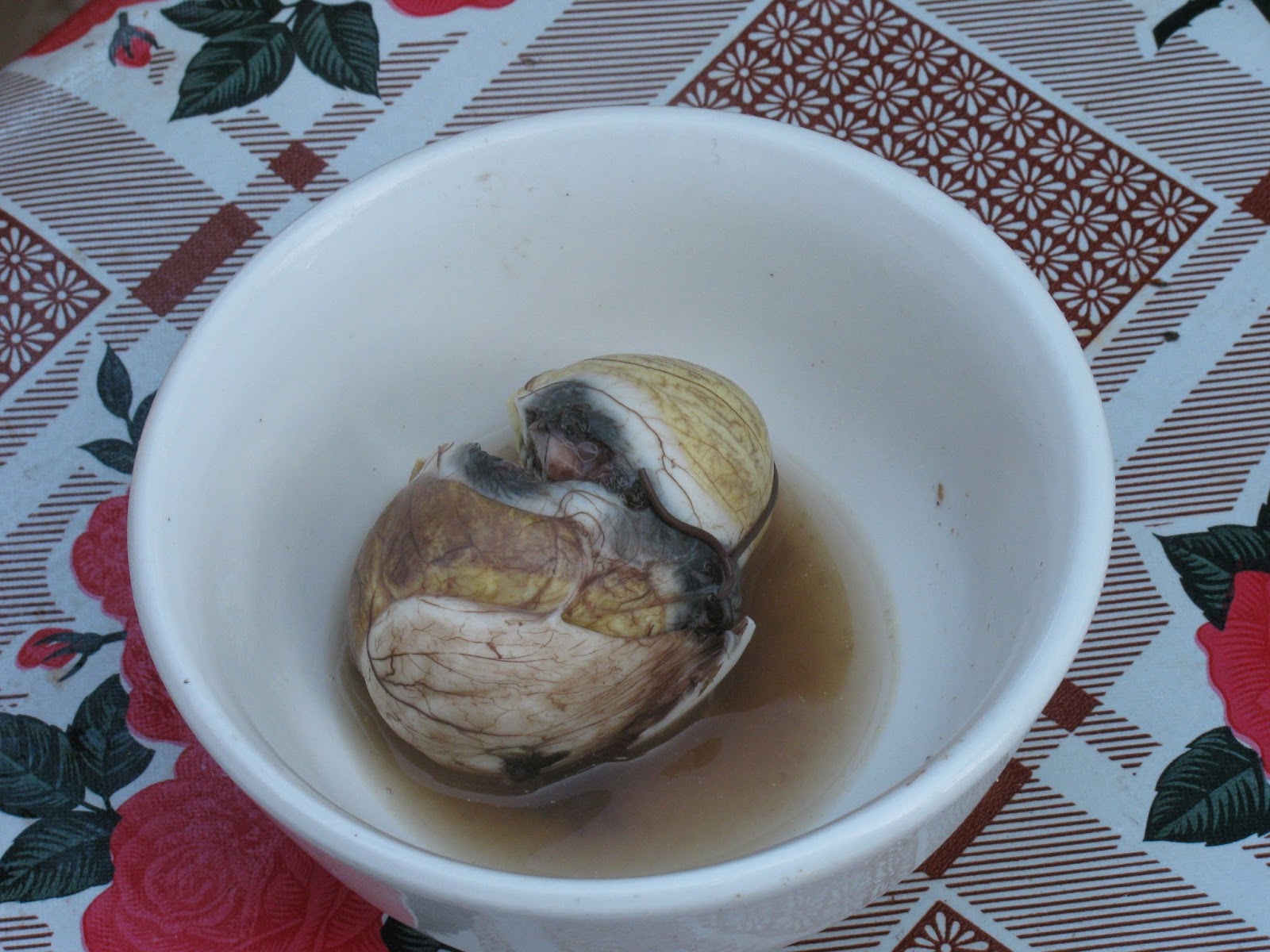 Sorry ~ No Ice Cream
at This Local Country Market
Near Siem Reap, Cambodia:
Just a local favorite, 10-day duck boiled in the pot (ring) above.
And, yes,  Terry and I went for it! 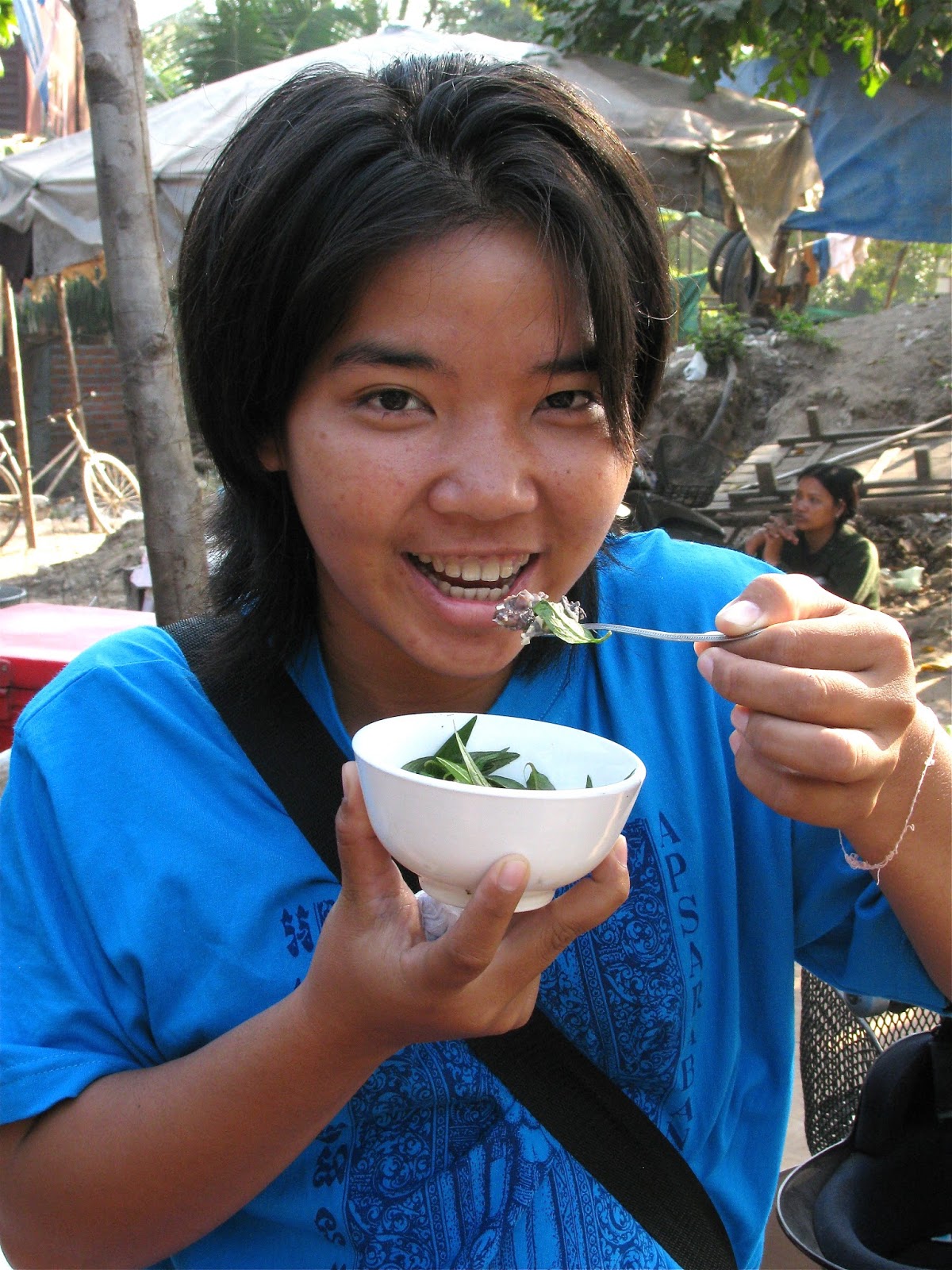 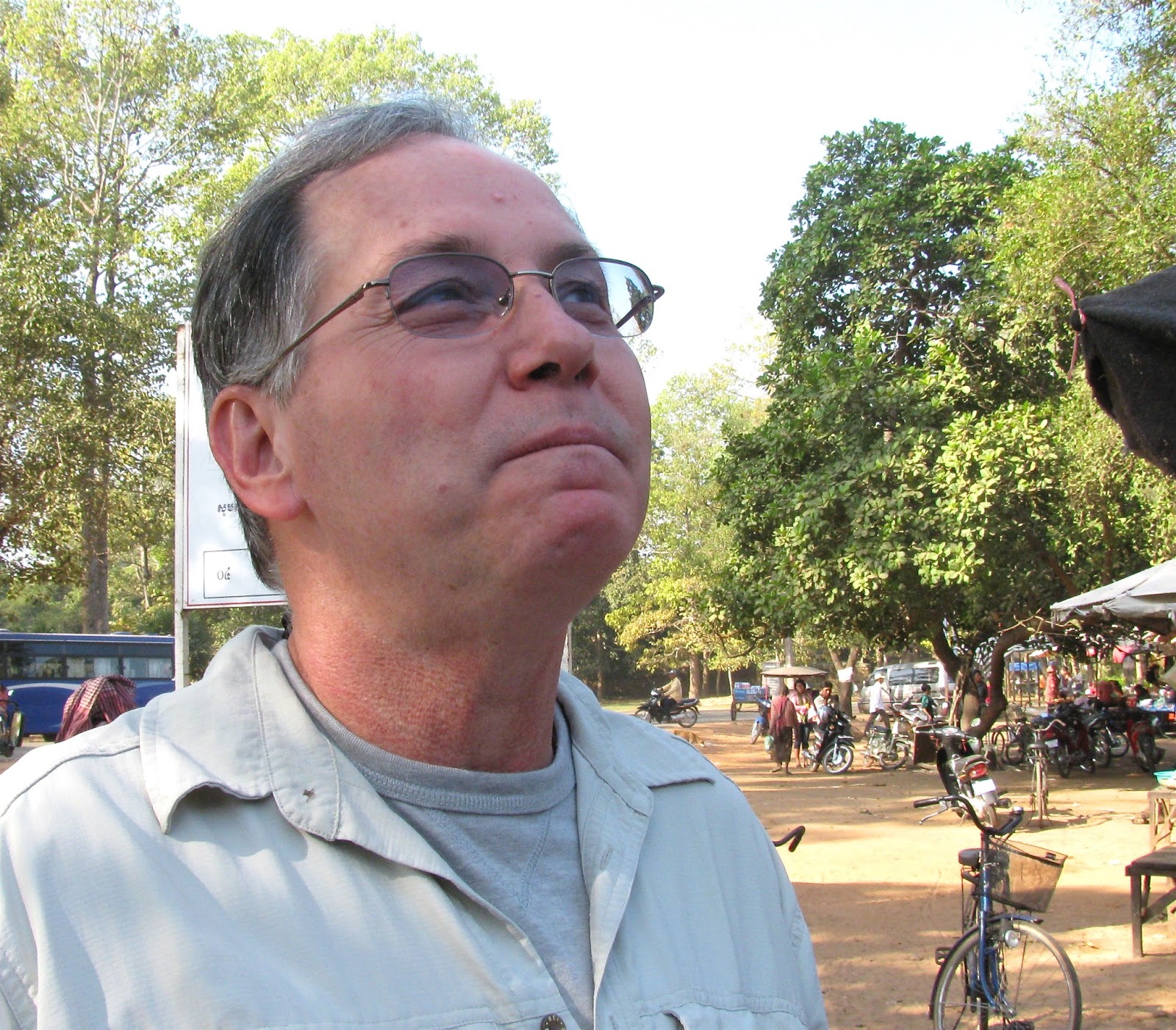 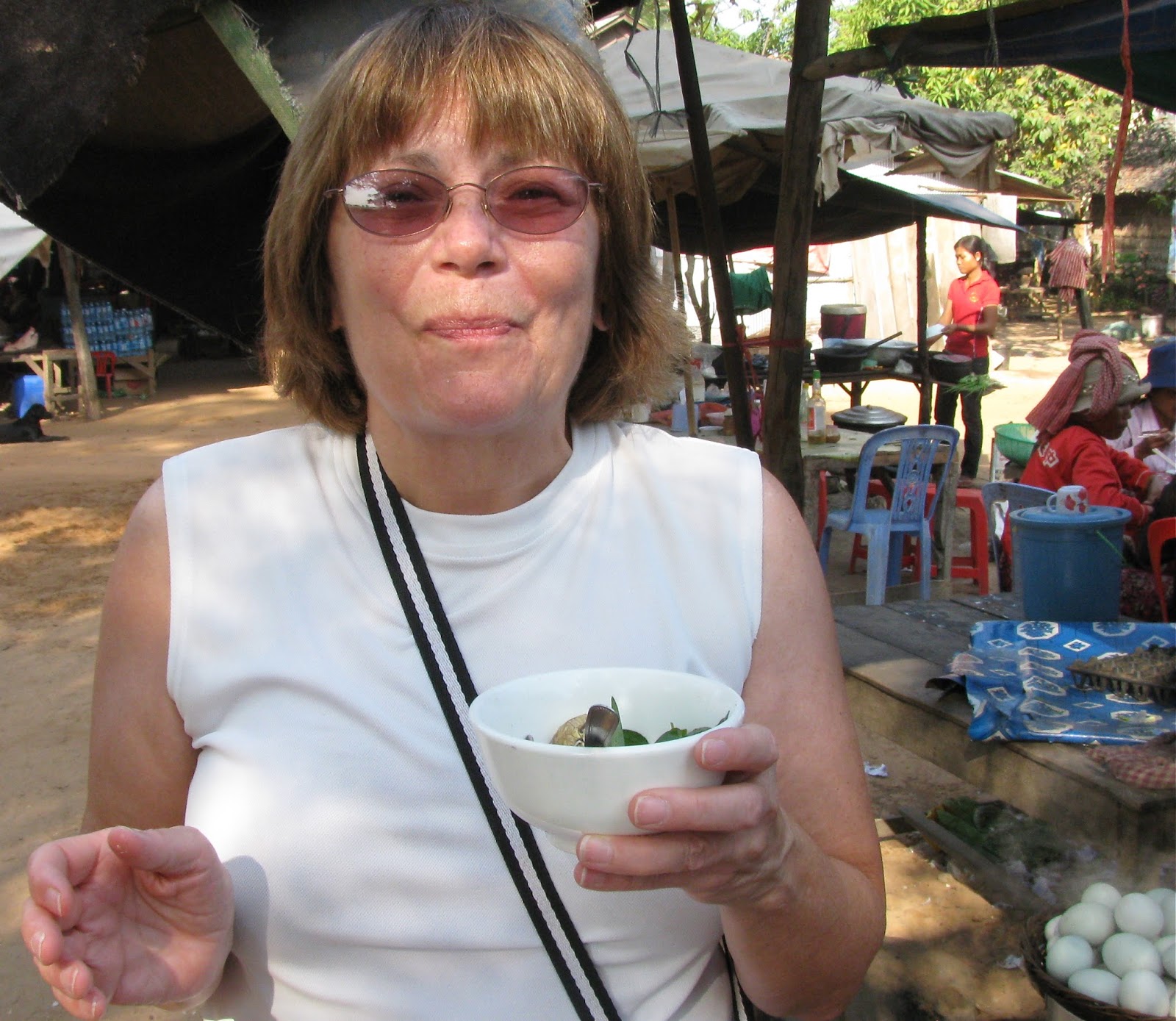 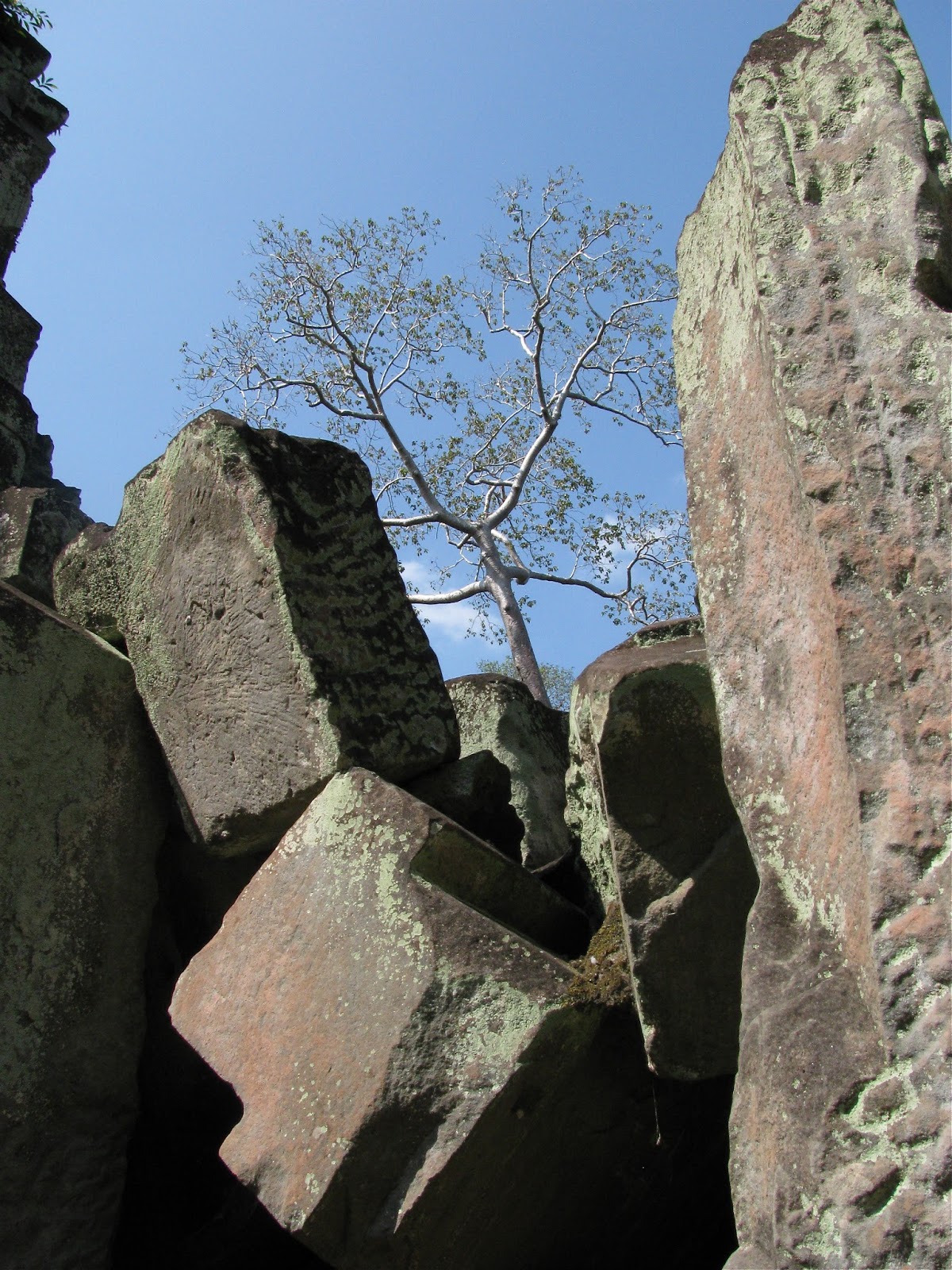 "Tombstones" at Ta Prohm, Cambodia
Ta Prohm is a temple located near Siem Reap, Cambodia.
This temple remains much like it was when found in the jungle.
The Film Lara Croft:  Tomb Raider
was partly filmed on location at Ta Prohm. 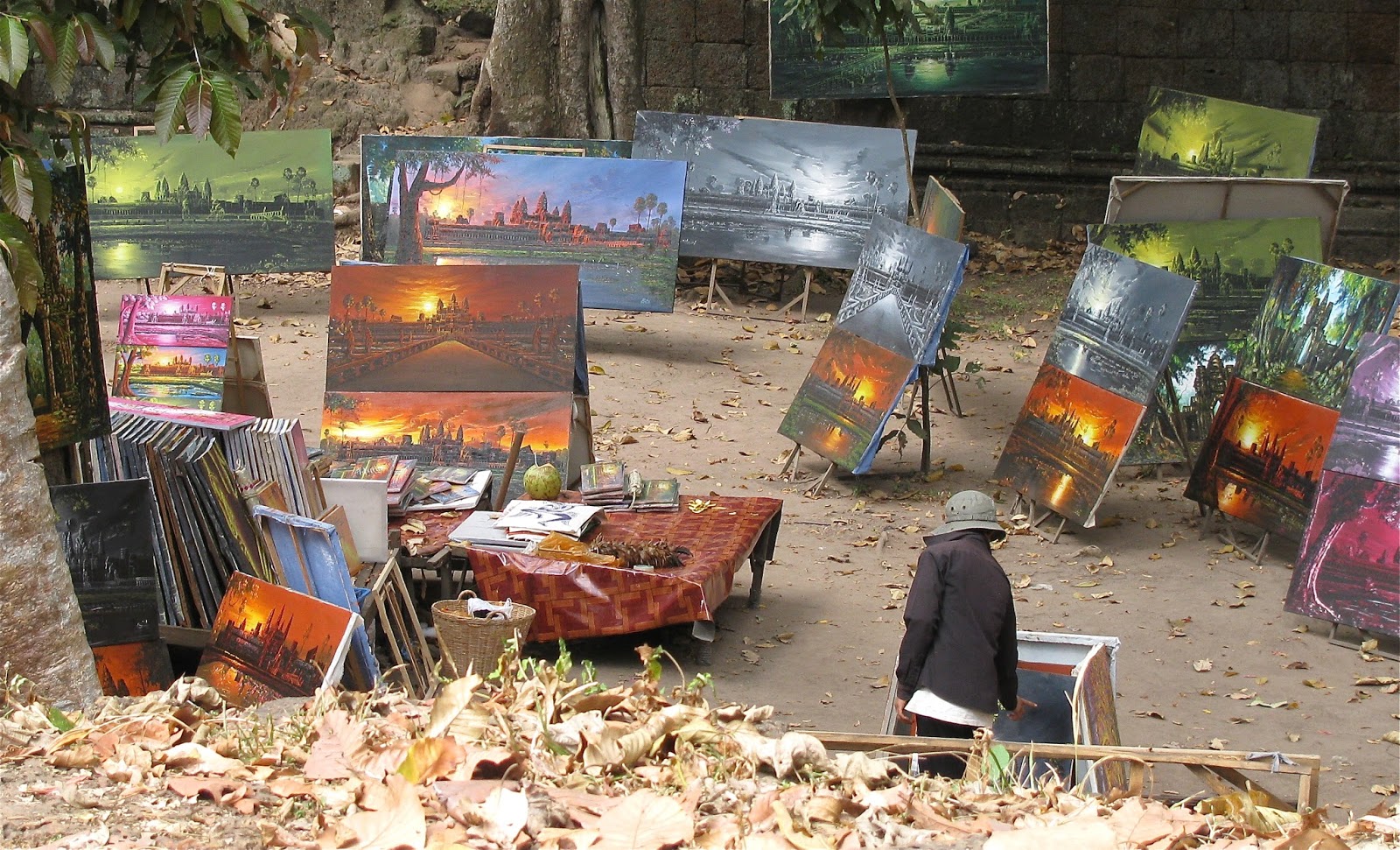 I can't wait to see everyone's photographs this month! 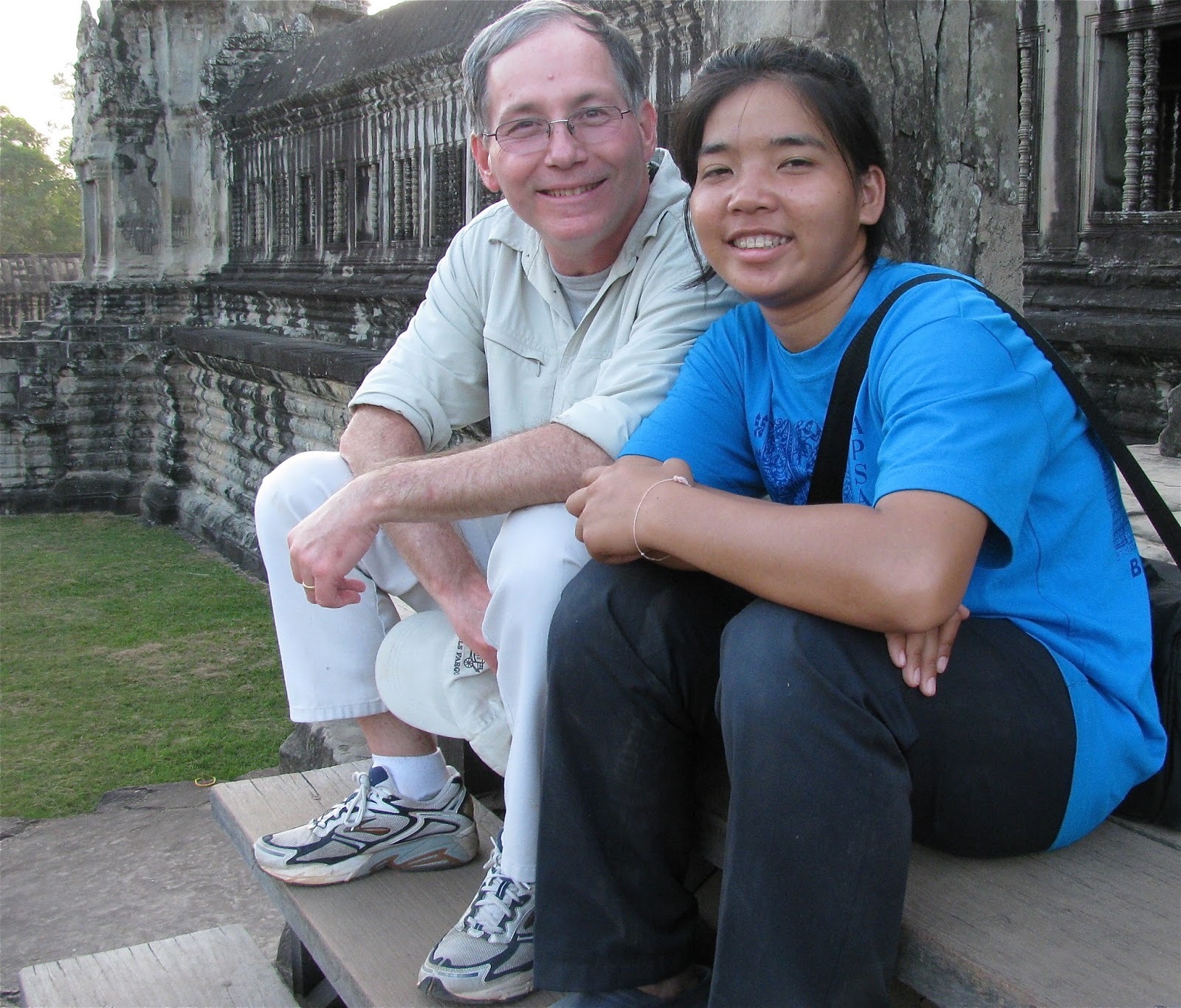 A Tired Terry and Soluy
Near Sunset at Angkor Wat