Stood Up in Aurora by the Aurora!


I thought by now
I'd have it figured out ~
but, nope!
Here it is,
another wrecked morning.

Can't blame it on
a raucous Friday night at Parkway. 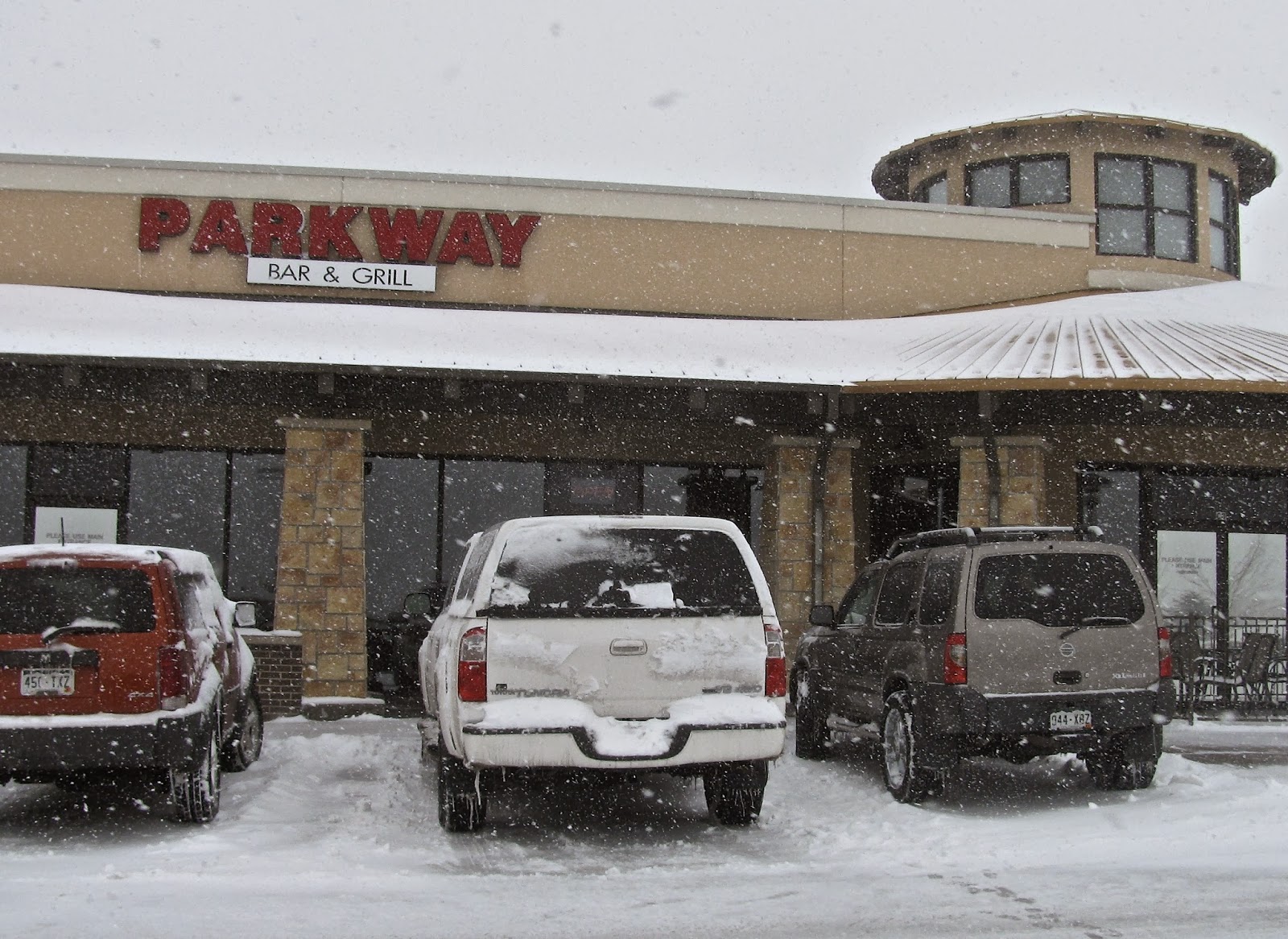 Can't blame it on
our new legal freedoms in Colorado. 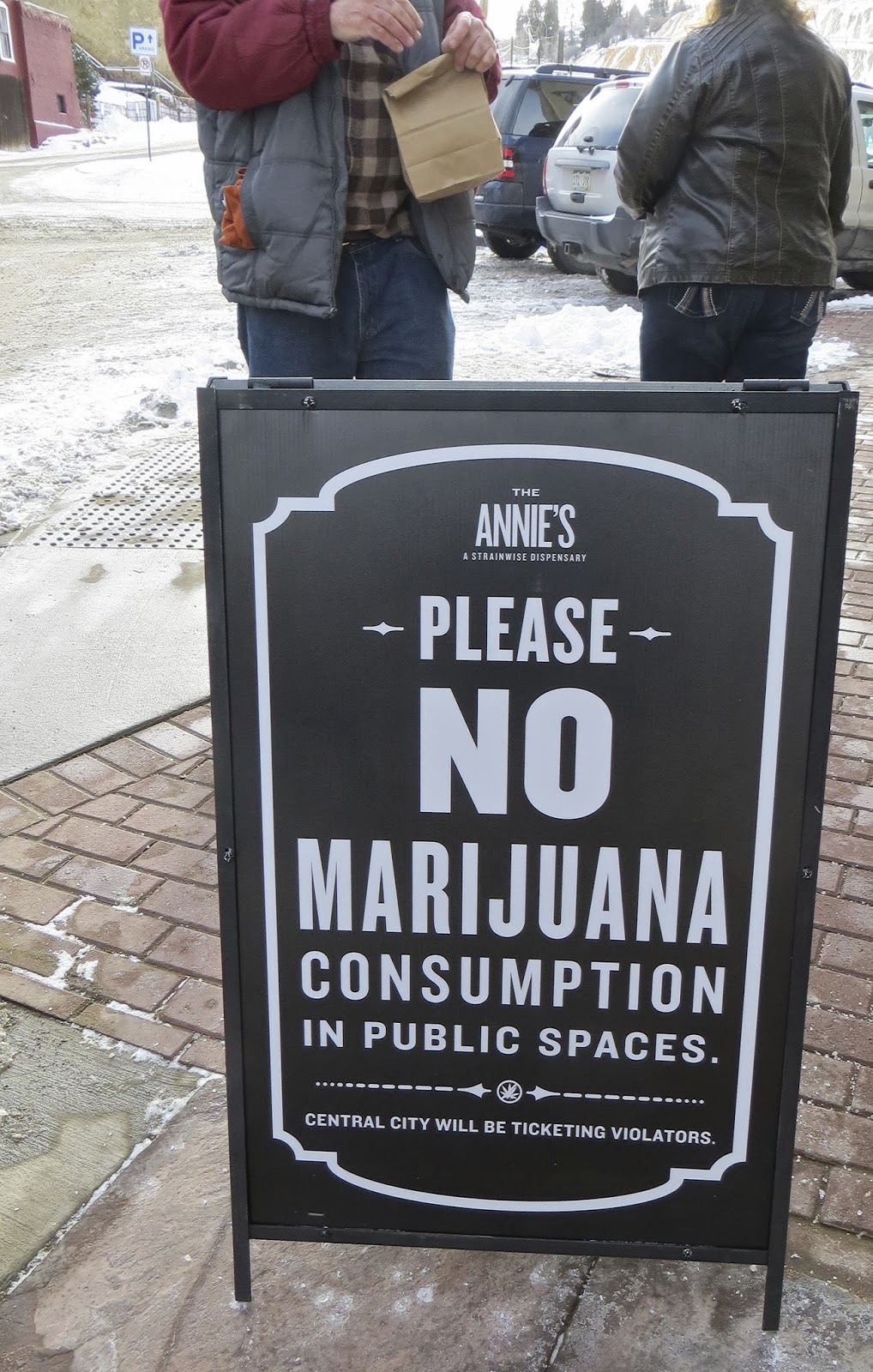 Can't blame it on
waking up jet-lagged in a foreign land. 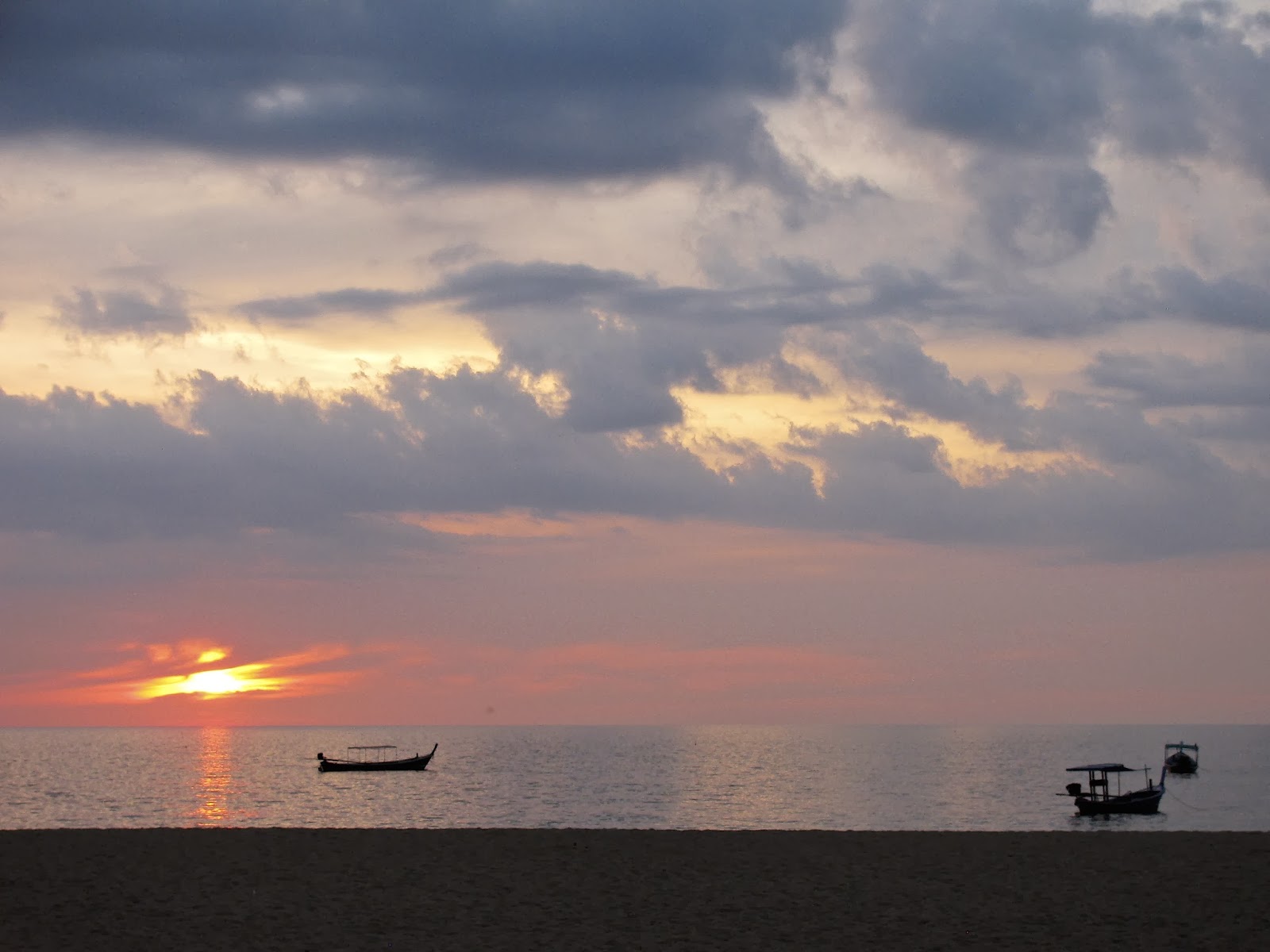 Nope ~ I'm blaming it on the aurora borealis! 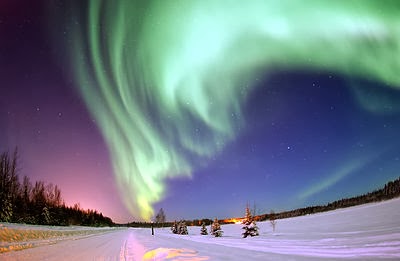 
I am wrecked this morning
because Thursday night I forced myself
to stay up past midnight
waiting on the northern lights ~
Following on the heels
of a wildly erratic holiday schedule. 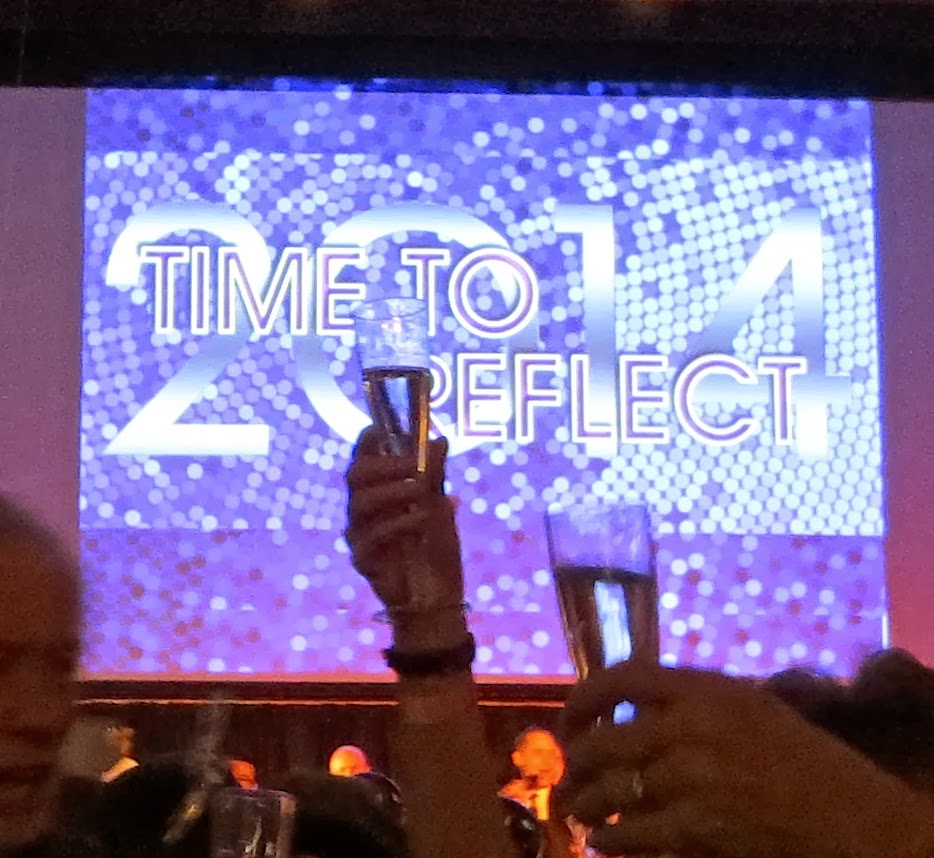 My diurnal rhythm is totally out of whack!
I never learn.

I fell for an aurora borealis line
instead of sensibly going to bed on time
in a attempt to reset my circadian clock.

The Denver Post reported last Thursday
that the aurora borealis would
shine its light on Colorado
around midnight:
clear weather, partial moon, good viewing,
a rare natural spectacle,
compliments of a strong solar flare
pushing a geomagnetic storm
to Colorado.
Source:  The Denver Post, 1/9/2013 p. 4a


I was probably the only person
roaming my neighborhood Thursday
in the dark and cold of a winter night
scanning the cloudy skies
for a shimmering glow. 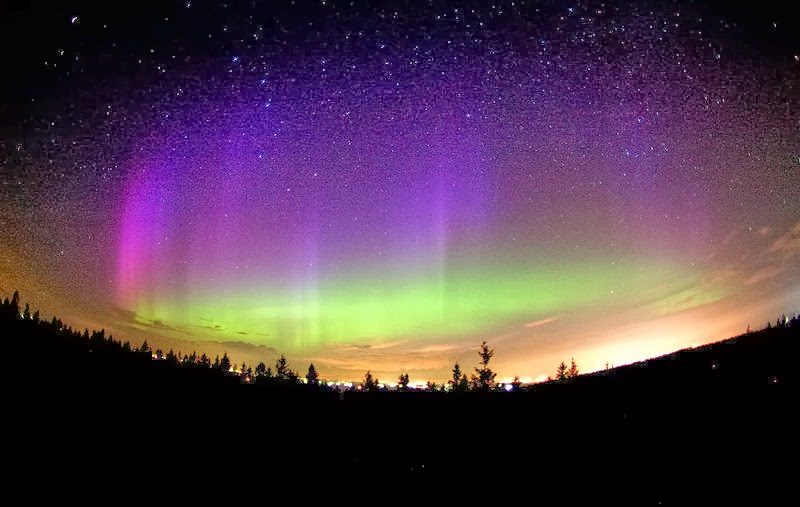 No such luck!
Like a no-show blind date,
the aurora borealis stood me up!
Rats!

How I long to see northern lights again. 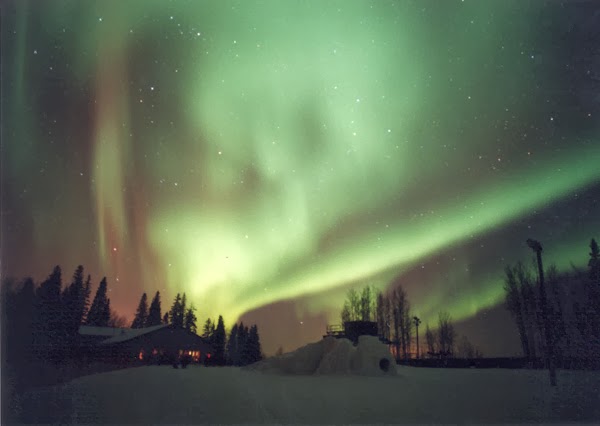 
When I was a young girl living in The North,
the curtains of shimmering light
weaving across the night sky
were the most beautiful and mysterious things
I had ever seen.

I did not know then that the northern lights
were the result of collisions
between charged particles from the sun's atmosphere
and gas molecules in the Earth's atmosphere.

Storms on the sun
send a solar wind
of electrons and protons
streaming out into the solar system.

When these charged particles
strike gas molecules in the Earth's magnetic field,
the molecules become excited.
Their electrons jump to higher-energy orbits
around their nucleuses.

When the gas molecules calm down,
their electrons jump to lower-energy orbits
releasing photons of light. 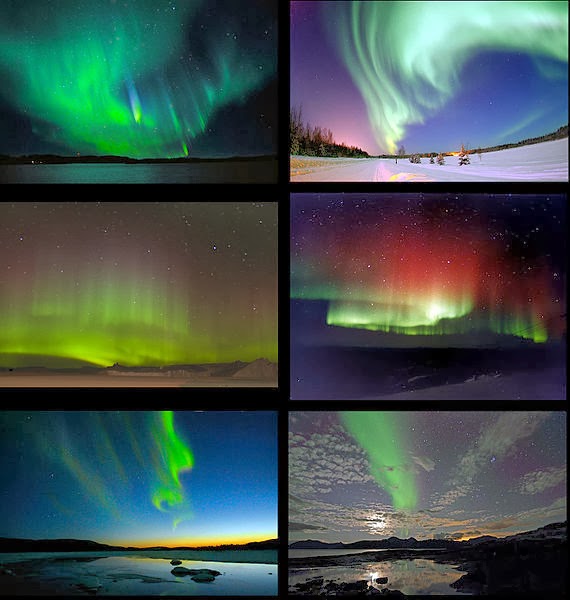 Auroras from Around the World
Source:  Wikipedia


The different colored lights of the aurora borealis
are caused by the types of gas molecules
in the Earth's atmosphere
colliding with the charged particles from the sun:
oxygen releases a green light,
and nitrogen releases blue and red lights.
Other colors such as white, violet, and pink
sometimes occur.
Source:  earthsky.org 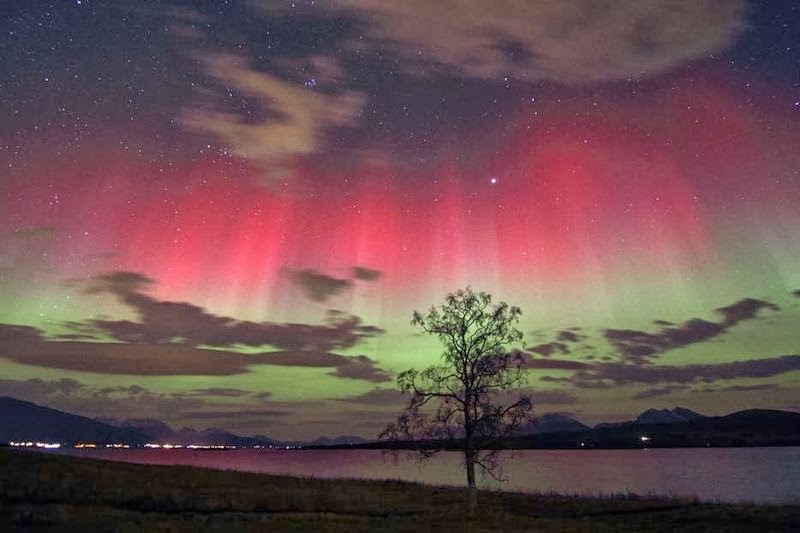 I used to walk in the dark

on the ice of Lake Attawapiskat
listening to the howl of wolves
and drinking in the beauty of the night sky.


My Brother Roy and I Canoeing
in Lansdowne House on Lake Attawapiskat, 1961


I used to lie in the dark
by the summer waters of Lac Seul
listening to the call of the loons
and watching the bright lights dance in the sky.

I could hear them:
the snap, crackle, and buzz of the aurora.

My Indian friend John
always warned me not to whistle or call the lights.
He said that if I did,
they would come down and burn me. 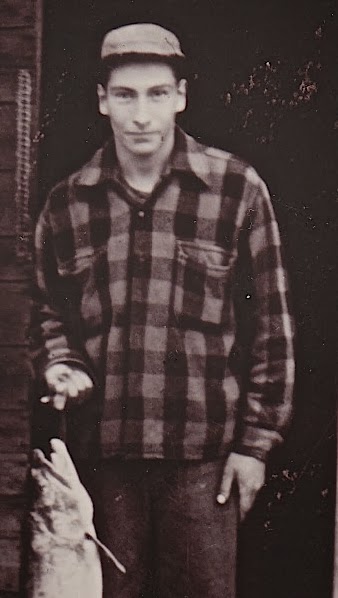 And, of course, I'd whistle and shout ~
and run through the fireweed
hellbent for the safety of our log cabin.
Those slanting, reaching lights never caught me!

Even though the aurora borealis stood me up,
the chance to see it again
was well-worth feeling wrecked right now.

Have you ever seen these glorious lights?
Posted by Fundy Blue at 11:49 AM