My father wrote:
"Somehow
when I took this picture, I thought
of Robinson Crusoe.
I felt quite alone
and lonely
because
then I didn't know ... ."


Didn't know what?
I wonder.


Do you have old family photos:
worn,
scissored,
faded words
penciled on the back?

My family has only a few photos
from Lansdowne House.
Our parents simply couldn't afford
to buy film, let alone develop it.1

On the back of the photo
of Dad's trunks on Father Ouimet's beach,
I can read my father's words,
but the rest is missing;
cut off by someone who
trimmed the photo decades ago.
Quite possibly me!

It's maddening,
because I would love to know
what Dad didn't know then.


My father took
the photograph when
he first flew into Lansdowne House
on this Norseman
on September 13, 1960.

The pilot off-loaded
Dad's luggage
on the dock, and
someone paddled it
across the water
in a canoe
and deposited it
on the beach.


And there Dad stood in the sand,
knowing not a single soul
in the remote Northern village ~
left behind in Nova Scotia,
his wife Sara, five children,
and his familiar life.

I'm sure the cottage was a bit of a surprise.
Shack is more like it.

Uno and Dad rented the cottage
from Father Ouimet for $15.00/month,
with fuel and lights included.

For an additional $2.50/day each,
they took their meals at the Father's rectory.
Unfortunately, the only furniture
the Father could loan them
was two single beds.

Hi There:
Everyone ready for the daily blurb?

Today has been quite eventful for me.
A while ago, I wrote to Gowan2
to see if the Department would send me some furniture,
since the Father could only loan us two beds.

Living out of trunks can get irksome at times,
and it is nice to have a couple of easy chairs to relax upon.
One gets sick of lying on his bed all the time.
Well, today the furniture started arriving. 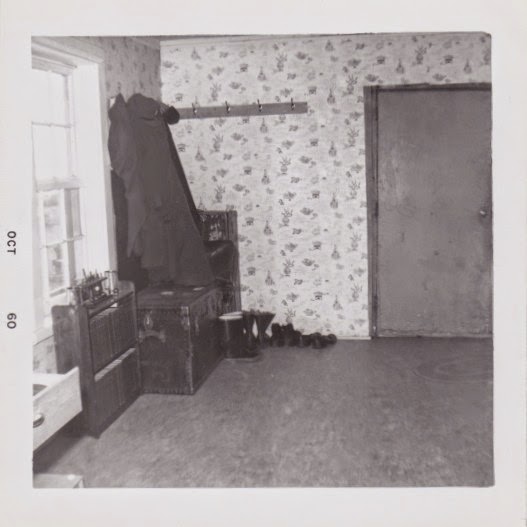 All the furniture will be used
in the new teacherage next year,
so we are taking good care of it.

I didn’t see the plane that brought the furniture,
but I wish that I had.
I guess it looked like a flying junk wagon.

The spring and mattress were too large
to put inside the plane,
so they lashed it to the outside.

There was so much wind resistance
(there was also a canoe lashed to the outside)
that the plane took two hours and forty-five minutes
to fly from Nakina.
This is normally a one and one half hour trip. 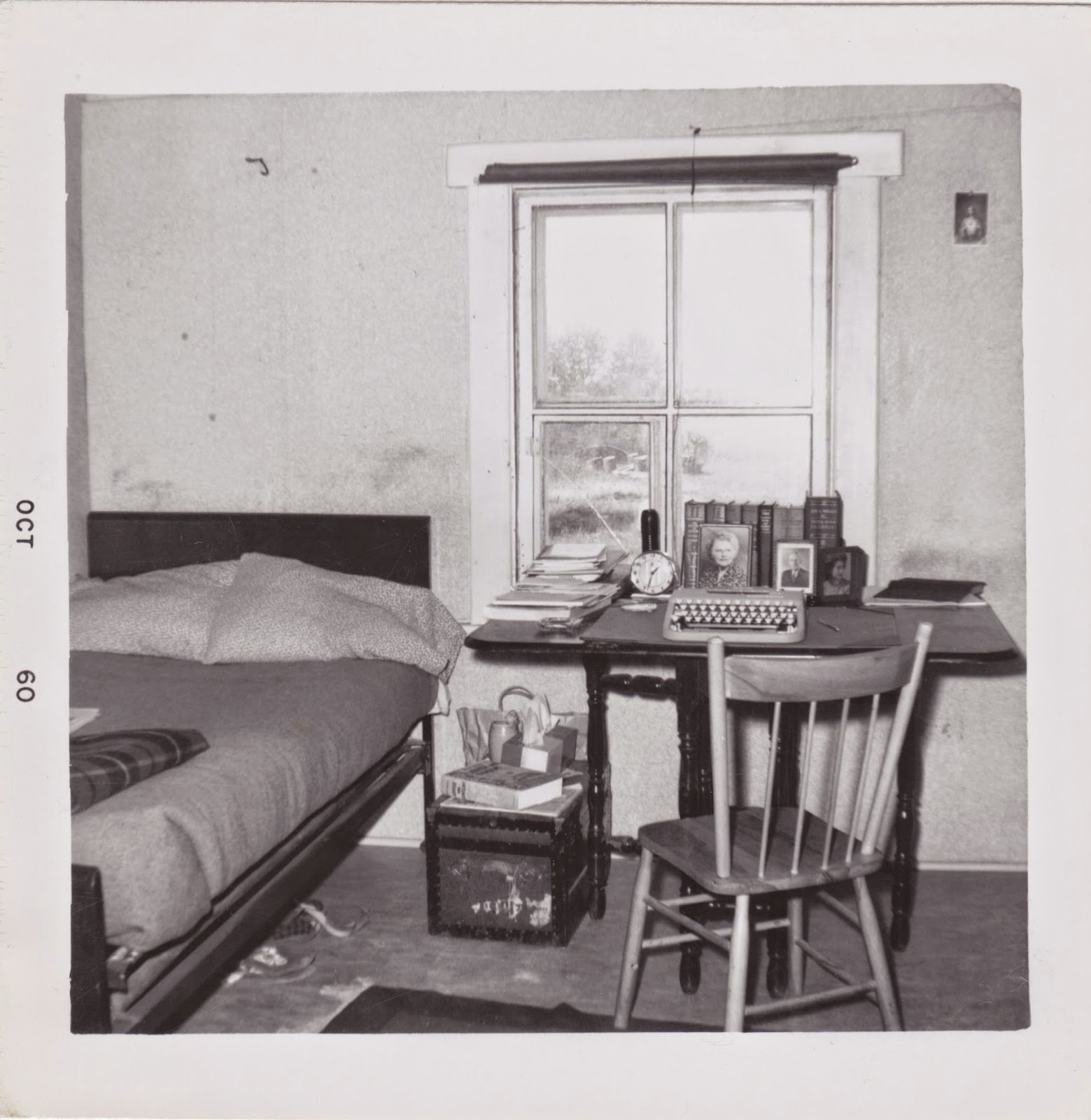 Dad's Bed with the Small Table
Uno and He Shared
in Their Two-Room Cottage
on the Father's Island
Photo by Don MacBeath,  October 1960
© M. Louise (MacBeath) Barbour/Fundy Blue
All Rights Reserved

When I was coming home from school,
I saw all this stuff on the DOT3 wharf.
I didn’t know how I was going to get it across
in my little canoe.

Fortunately Duncan came along just then
and helped me out.
I don’t know what I would do without Duncan.
He is a really good friend.

He got the DOT speedboat
and hauled it across to the island for me.
Uno and I then carried the freight up from the beach. 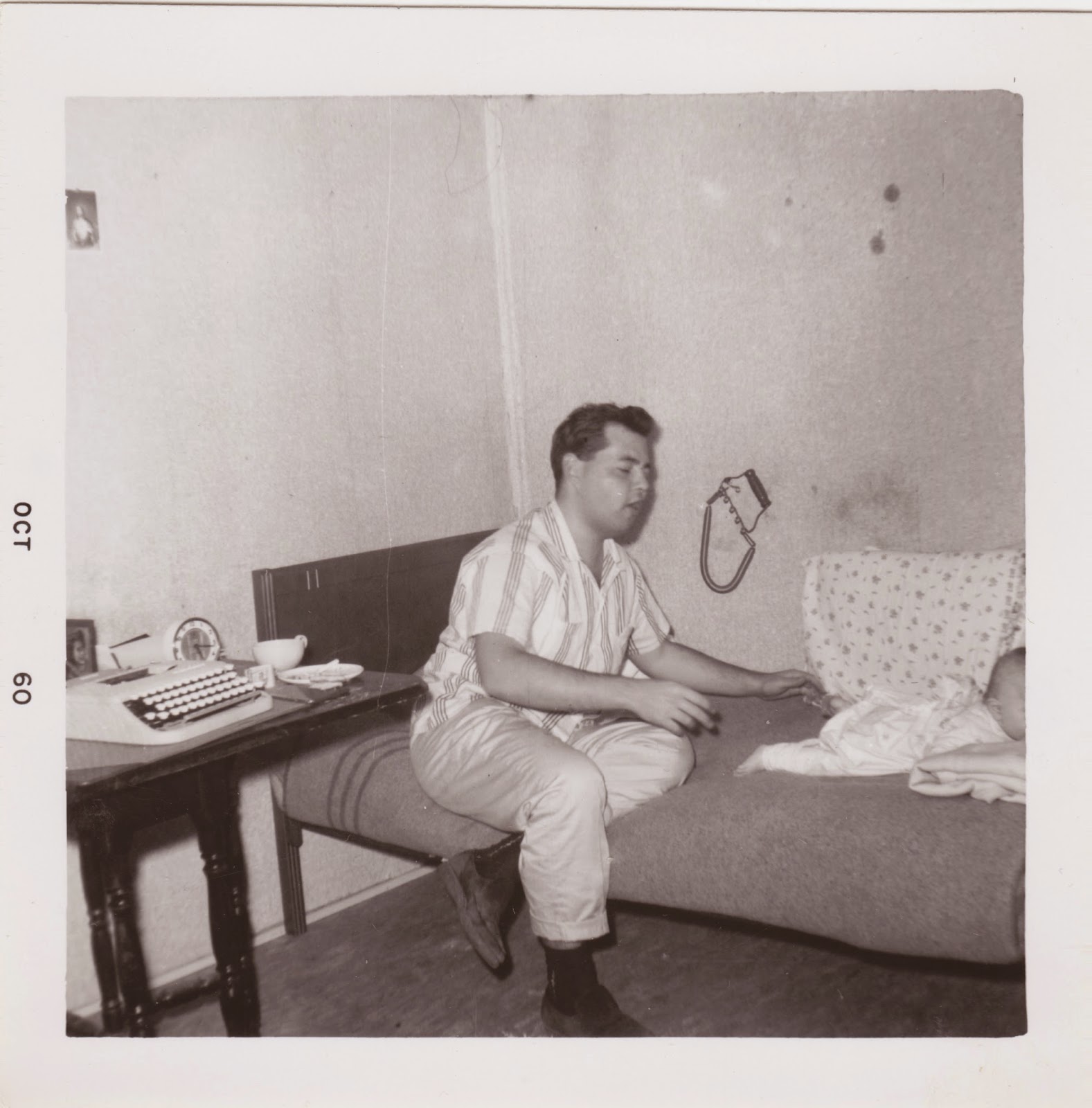 Life Lived on a Bed
(when you have no other furniture)
Uno is trying to catch Baby McRae
who is making a break for it.
Photo by Don MacBeath,  October 1960
© M. Louise (MacBeath) Barbour/Fundy Blue
All Rights Reserved


Tonight we spent rearranging our furniture
and storing our trunks in the Father’s attic
to make room for the furniture still to arrive.

We are expecting a chesterfield, a bookcase,
an easy chair, and a writing desk.

Another thing I found on the DOT dock
was some parts for a new schoolyard swing.

Now isn’t that just like the Government!!
They send in swings just as winter sets in,
but they can’t see to get my desks in for me.

I suppose you are wondering
how I always find everything on the DOT wharf.

First, it is the only wharf
the plane can get to now,
since the water is so low,
and besides, that is the wharf closest to the school.

I always check the dock
whenever I see anything on it,
because no one notifies you
if you have anything on the plane.
They just dump it and leave.

Thank goodness the Indians are trustworthy.
They have never stolen anything from the wharf yet.
I often wonder if white people
would be so white in this respect. 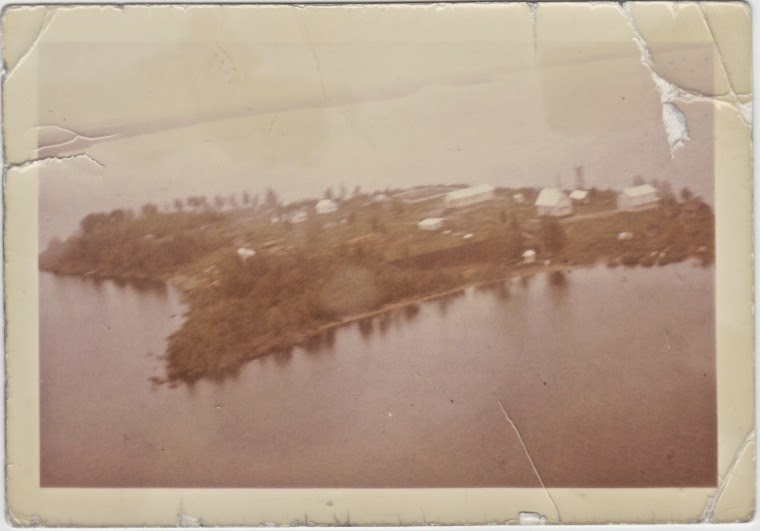 Couture Island4
with Roman Catholic Mission
Lansdowne House, Northern Ontario, Canada
Dad's cottage is below the wind charger between the church and the rectory.

Uno was just laughing at me typing.
There was a rumba tune on the radio,
and I was keeping perfect time to it with the typewriter.

He says that I really make the old thing hum
when there is a fast jazz tune like MUSKRAT RAMBLE,
or some good Dixie Land Jazz tune playing.

Now it is my turn to laugh at Uno.
He is doing his exercises.
We have started a rigorous physical fitness campaign.

It may be too late for me
to turn into a Charles Atlas,
but at least it won’t do me any harm,
and it does help to pass the time. 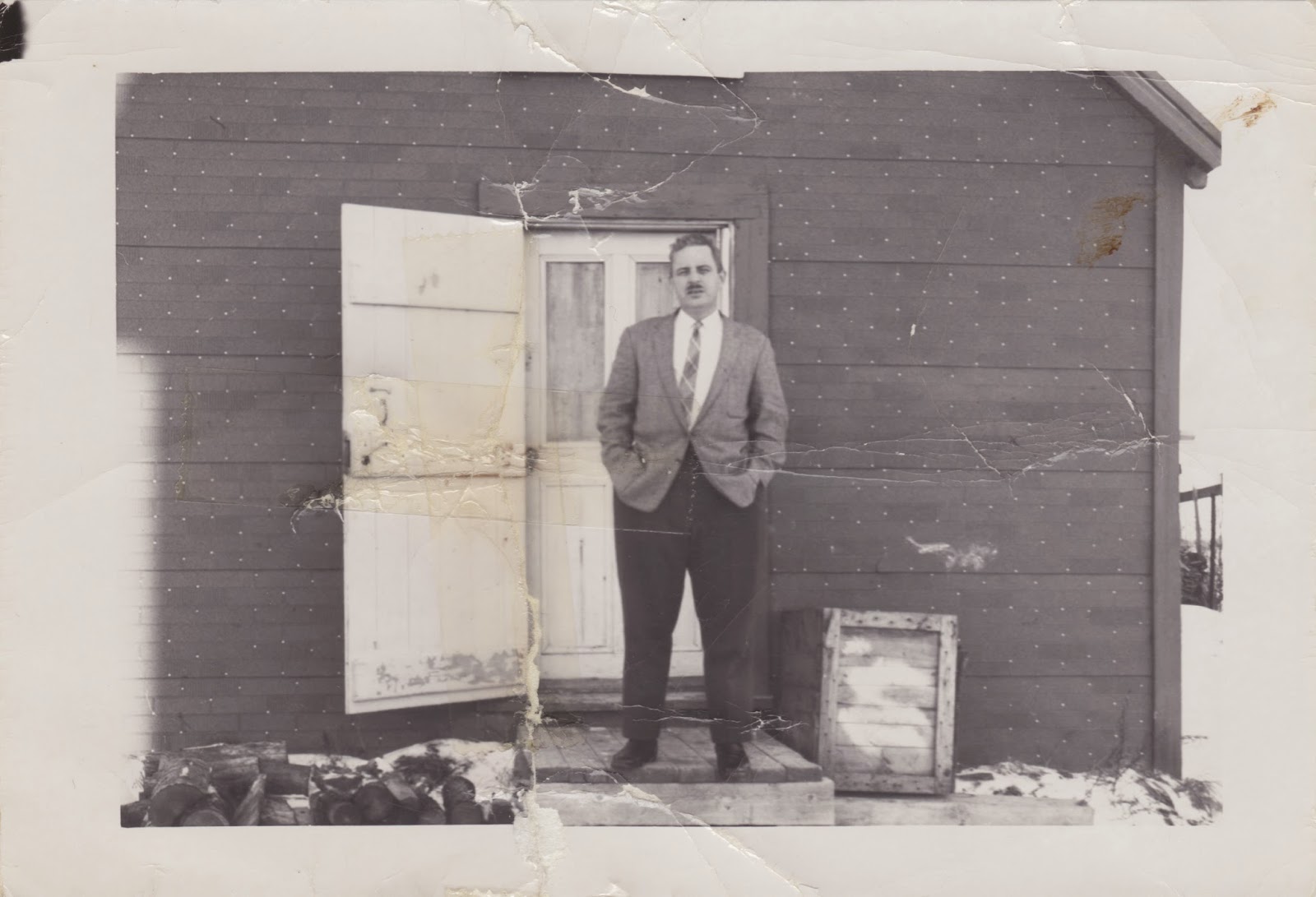 
Yesterday I was talking to
one of my little girls, Alice,
and I told her that she could be a very pretty girl
if she would take better care of herself
and try to wear something clean and reasonably good fitting.

Well, it would have done your hearts good
to see her today.
I hardly knew her when she came to school.

Her hair was clean and curled,
her face and hands were clean,
and she was wearing not a bad dress,
and it was reasonably clean.

I’m telling you, any parents
would have been proud to claim her as their own.
She was beautiful with her flashing brown eyes,
her jet black hair, and her beautiful light brown skin.

You should have seen my grade one pupils
and my beginners today.
I had them making paper hats,
putting their names on them, and coloring them.

They made wonderful hats
and were very proud of them.
In fact, they insisted on wearing them home.

They went out like a bunch of fashion models,
but as soon as they got outside they ran into trouble.

There was a strong wind blowing.
In a few moments the yard
was filled with flying hats
and running children chasing after them.

In fact, I could still see some of them
ten minutes after I let them out.

Well, I guess that just about sews up things for today.
Will be back at the same old stand tomorrow.


1  This is why, if you've been reading some of my Northern posts,
you may have noticed me using the same photos more than once. 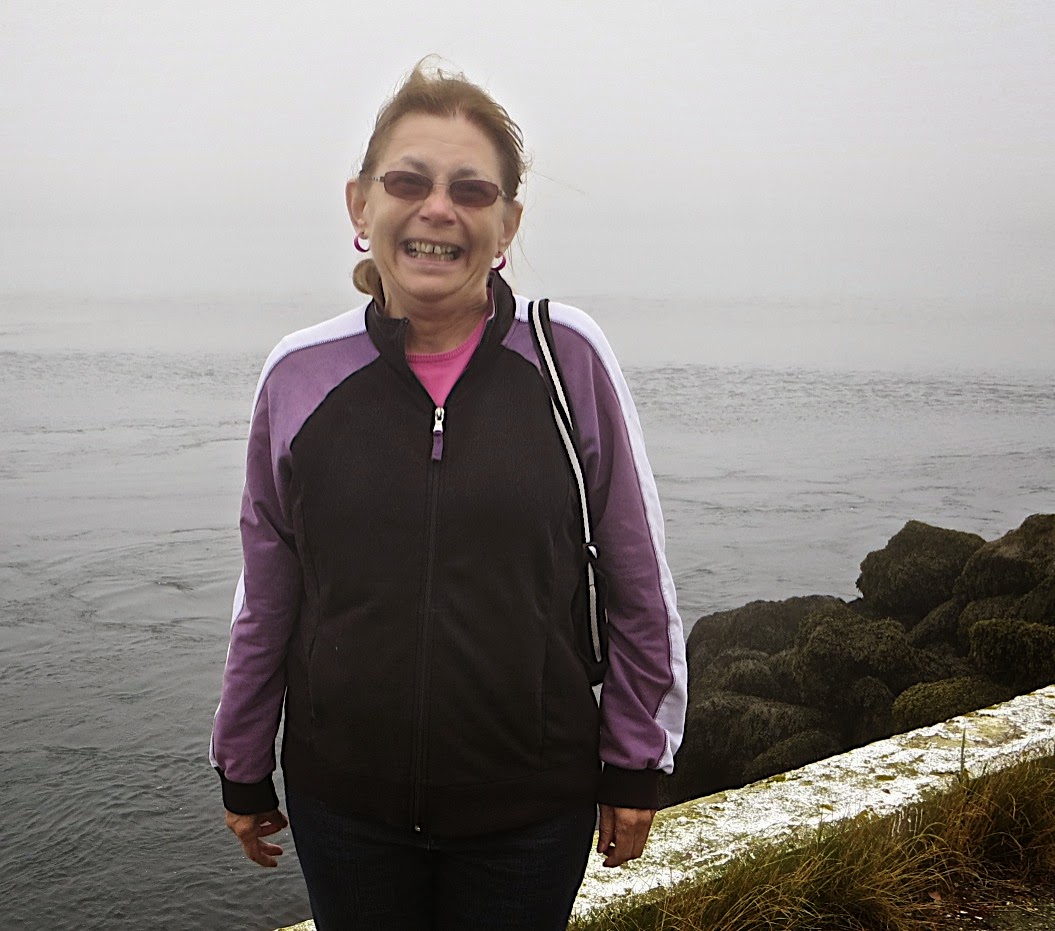