The following photo is rated NC-17.
That means that no one under 18 can look at it.
It is not a pretty sight.
It is an image of a maniac.
You can see the craziness in the eyes!
Out.  Of.  Control. 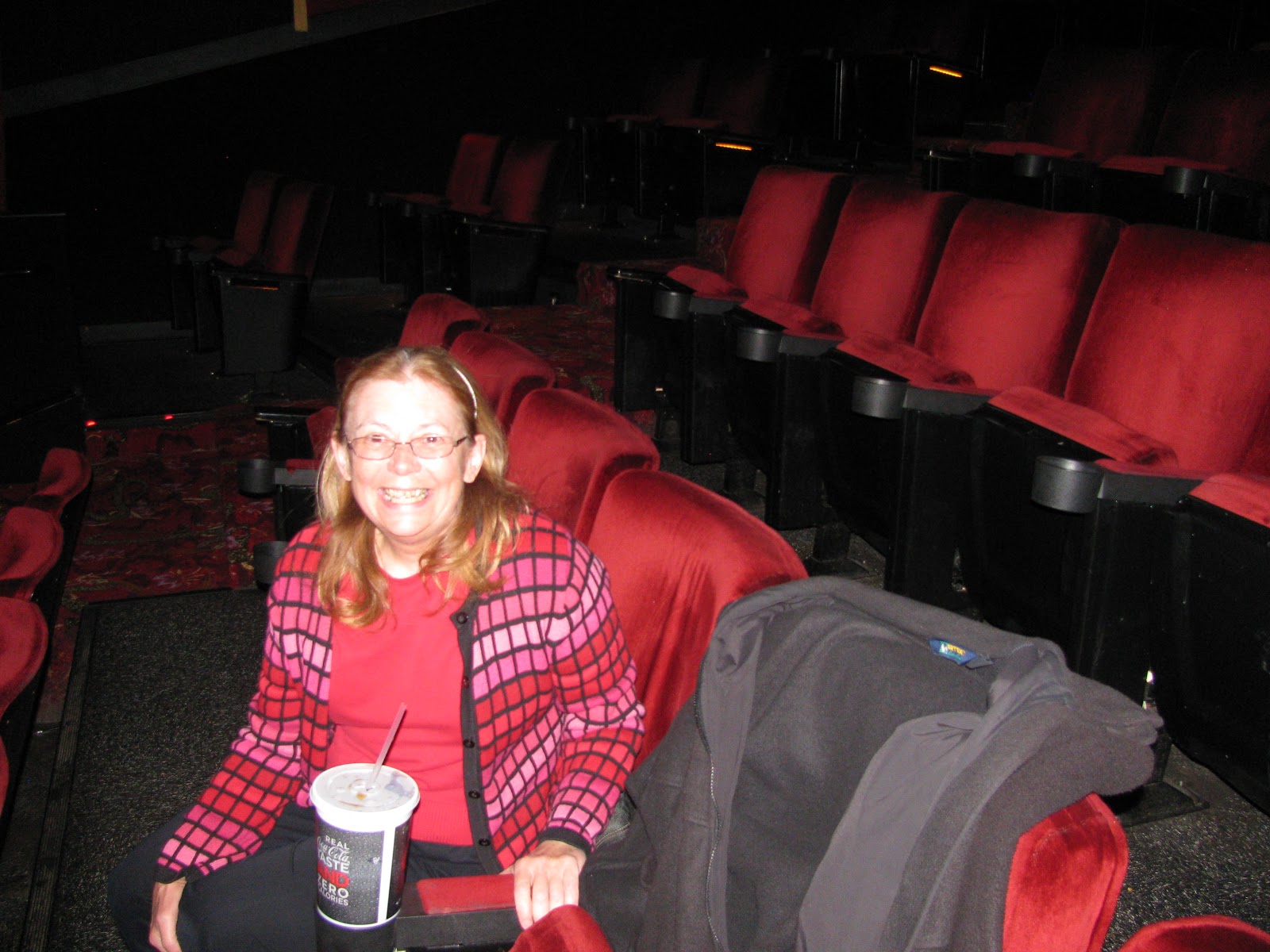 What follows is the maniac’s review of the movie Cloud Atlas.

It's late in the morning.
The maniac is on her computer.
She is in creative flow.

She was in the same position last night until 1:48 a.m.
Her ever-patient husband has had to fend for himself this morning.
She was too tired to get out of bed.

He pours her a cup of coffee and asks, “Have you checked to see what time Cloud Atlas starts?"

The maniac frantically runs around tidying the house.
The house is a disaster!
The maniac has been lost in the flow.

Some minutes later he looks up from his iPad and says calmly,
“It starts at 11:40 at the Chinese. We can make it.”

The race is on!

Flying down Arapahoe Road he says,
“We’re going to make it.
I told you we could.
I can change fast and get out the door fast.”
He never speaks with exclamation marks.

No matter!
They’re pulling into the Chinese lot with minutes to spare.

“You’re an AMC theater now?” she says scrabbling through her purse for the STUBS.
Swipe.
“It’s expired.  Do you want to renew it?”
“Yes!” she says.
“How much?” says the husband.

“Just do it!  The movie’s about to start!
I need to hit the snack counter!”
She almost always speaks in exclamation marks.

“You can get a discount on snacks now that your card is renewed,”
says the helpful kid behind the glass as he swipes the credit card.

“Don’t worry!” the wife says.  “We’ll get a discount on snacks!”
She hands the tickets to the ticket lady saying, “Have we missed the beginning?”

“You have lots of time,” the  ticket lady smiles.
“Theater 16 on the right.  Snacks are right ahead of you.”

The wife starts dashing around the snack area that’s as big, bright, and confusing as Somni-451’s Neo So Copros.
But she’s looking at the walls.

“What are you doing?” asks her ever-patient husband.
“Looking for a Cloud Atlas poster!”
“I thought you wanted snacks and a seat in the theater.”
“I need a photo for my blog!”

“There is no Cloud Atlas poster.
I’ll go to the bathroom while you get the popcorn.
I’ll take your picture in the theater.”

“How much is a small popcorn?” she asks the young kid behind the counter.
“Six bucks!”

“Six bucks!  Six bucks for a small popcorn! Are you kidding me?”
She obviously hasn’t been to a theater in a while.

“If you have a STUBS card, I can upsize you to a medium for the same price.”

“Medium is good.  I'm hungry.  Wait!”
She has spotted the manager’s special among the neon confusion.  “What’s that?”

“Sixteen bucks!  Sixteen bucks for two hotdogs!  Are you kidding me?"
She is under a lot of stress.

“They’re very good hotdogs,” says the helpful young kid behind the counter.
“You get a large coke too.  Discount with your STUBS card.”

“How much with the discount?”

“How much for two small popcorns and a small diet coke?
Upsized to medium with my STUBS card.”

“That’s almost as much as the hotdog special for just two small popcorns and a small coke!”

“Upsized to medium for free.”

“Just give me the dogs."

“You have rewards on your STUBS card,”
says the helpful young kid behind the counter.
“Do you want to use them?”

The EP-H walks up.
The wife hands him a dog and the coke saying,
“I got you a hotdog. We need mustard!"

“Mustard's over there, Mam.”

They run for the mustard.
Squirt. Squirt.
They dash into the theater.
Race up the stairs.
Dump their coats and snacks.
The wife scrabbles through her purse and pulls out her camera.
“Quick! Before the lights go down.  For my blog!”

The EP-H takes the photo.
She races down the stairs.
She is attracting a lot of attention in the theater.
She does not notice.
She is on a mission.
Bathroom.  Popcorn.
A photo of the theater sign documenting she was at Cloud Atlas.
For her blog.
Before the movie starts.

“You’re back,” says the  helpful young kid behind the counter.
“He wanted popcorn.”
“Small, upsized to medium, with your STUBS card?”
“Six bucks, right?”
“Yup.”

“Do you want the popcorn?” 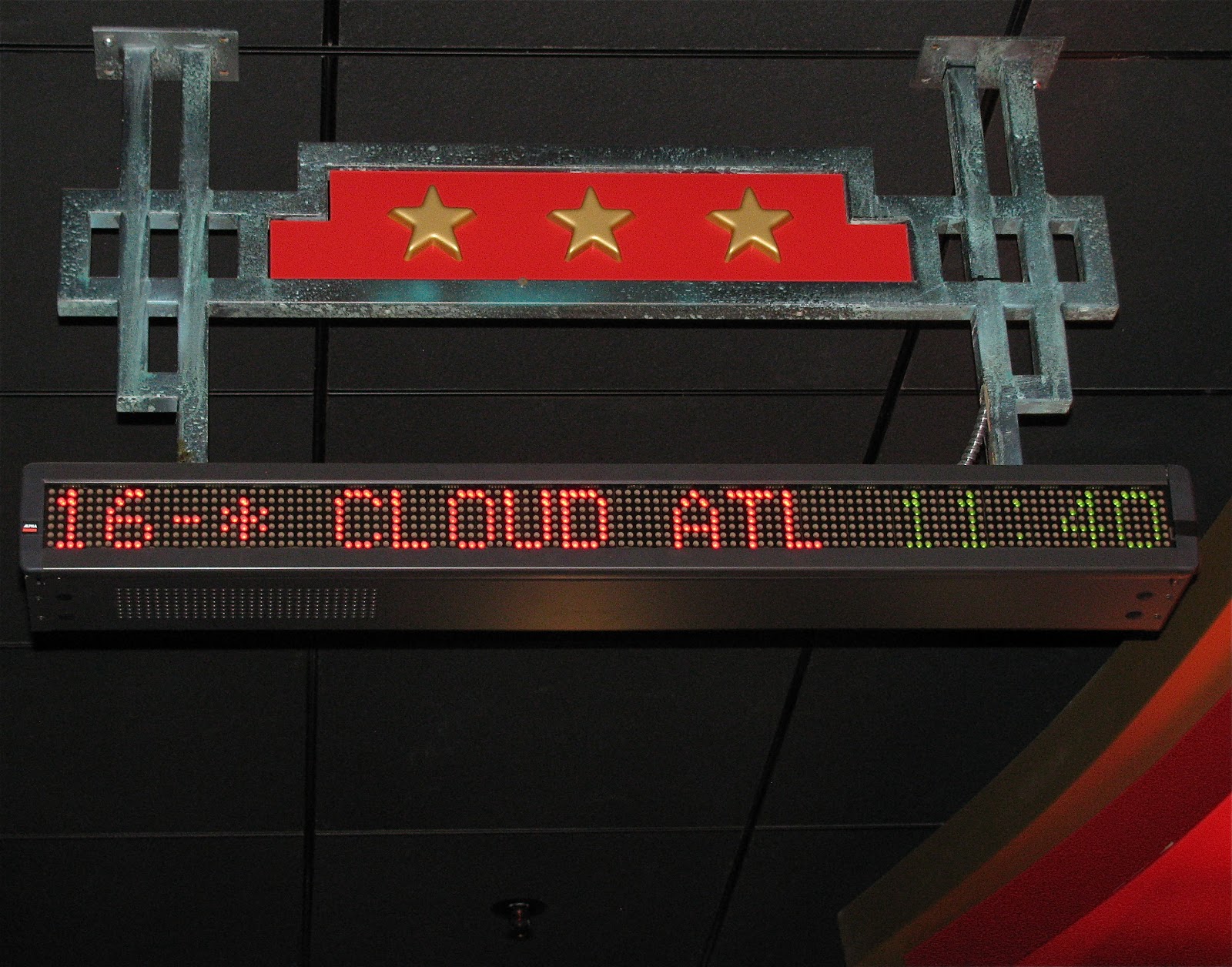 Mission accomplished.
She dashes back into the darkened theater and races up the stairs.
The music is playing.
There is a bearded man on the screen.
“Oh no!" She tosses her husband the popcorn.

She can barely breathe.
Time passes.
The cinematography is gorgeous.
The characters are compelling.
She cries at the end.

Out in the bright, cold air she asks, “What did you think?”

He gives her The Look.  “What did you think?” he asks.

“I loved it!  Couldn’t you tell?  I could hardly breathe.
And the Timothy Cavendish section was so funny.
It made me proud to a Scot - well, of Scottish descent.
I laughed ‘til I cried.”

“I know,” he says.
He had been elbowing her in the theater because she was laughing too loudly and too long.

“I didn’t know WTF was going on!” he said getting into the car.
“I don’t see how anyone could go to that movie without reading the book first."

"It was quite different in places from the book," she says.

“It was an adaptation," he says, starting the car. "Like The Lord of the Rings movies."
Did you like the movie as much as the book?  Cloud Atlas, that is.”

“Oh yes,” she said.  “The movie adaptations worked for both LOTR and Atlas."
Less and more.”

“So much from the books was left out of the movies,
but the changes in the stories made the movies work.
I didn't think the Wachowskis could make a movie of Cloud Atlas any more than I thought Peter Jackson could make movies out of LOTR.
I was worried they would really screw up my favorite books. Wrong!
They succeeded beyond what I had dared hope.
The movies can stand alone, different and separate from the books.
And my LOTR and my Atlas are still mine.”

“You weren’t confused?” he asks, pulling unto Arapahoe.

“Are you glad you went, even if you were confused?” she asks.

“I thought the Korean lady was interesting.  The rest was okay.
I did it for you, you know.
The movie.  The photos. The hotdog.”

“You’ve taken me to a lot of movies that weren’t really your thing.
But, then, you’re not really into sci-fi or fantasy.”

“But, here’s what I really don’t get," he says.
"What was Bilbo Baggins doing in Cloud Atlas?”

“Yeah, he was that old composer and Cavendish.”
He’s confusing Jim Broadbent with Ian Holm, she thinks.

“Except Bilbo was taller in this movie.”
He’s really confused.

Suddenly she starts to laugh.
“You’re right,” she says.  “Elrond was all over Cloud Atlas.”

“You know the half-elf in LOTR, Lord of Rivendell, Arwen’s father.”
She laughs harder.

“The Konamen did kind of remind me of orcs," she says.
Well, actually more like Saruman’s Uruk-hai.
A touch of frisson at all that bad dentition."
She laughs even harder.

“Oh my God, you’re brilliant!” she says, tears running down her face.
"Ayrs and Cavendish did have a striking resemblance to Bilbo!
Bilbo, Elrond, Uruk-hai!
Everyone and everything is connected!
Mitchell and Tolkien just didn’t realize how connected.
They’re connected!
Tolkien stopped too soon.  Mitchell began too late.
And, rumor has it that Ian McKellen was offered a role in Cloud Atlas.”

“Gandalf. The actor who played Gandalf.
Maybe Gandalf was in the film, along with Bilbo and Elrond.
With all those characters reincarnating together through time, maybe we just missed him.
And the kid Javier, Luisa’s friend, maybe he’s Frodo!”

"That was a joke.  About Bilbo.
You couldn't breathe during The Hobbit preview either.
By the way, you owe me Argo.  And maybe 007."

"Speaking of stomach.  Maybe next time you could stuff a hotdog in that purse.
Instead of that camera.
It would be cheaper.
A better deal than that managers special."

She scrabbles for paper in the purse and scratches quotes on it.

“You need an intervention," he says.
“You better go on-line and tell people you’re going to be absent for a while.
This whole Cloud Atlas /blog thing is out of control.”

“OMG!  FRODO LIVES!” she says.
And she laughed like a maniac all the way home.