The Night the Horses Screamed

Do you ever have a night
when you just can't sleep?

When you spin around and around in bed
tangled in twisted sheets
long into the dark hours?

When things unwanted bubble up
from the depths of your past,
and you just can't stop
the images, the sounds,
the flood of feelings? 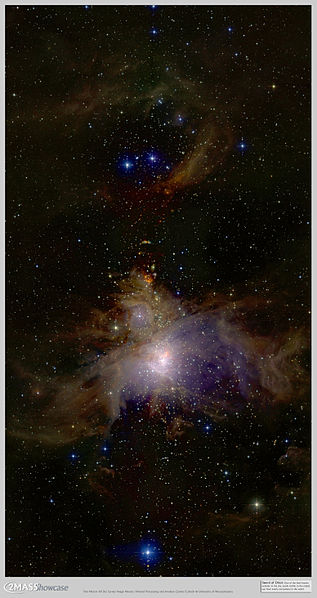 Sword of Orion in the Night Sky
Source:  Wikimedia/NASA

Then, when you finally
fall asleep in exhaustion,
you wake up again,
and you watch the clock and the sky thinking
"Please God!  Will morning ever come?"

That happened to me the night before last too.
I woke and watched a slow hour
crawl from black toward the red dawn.

I finally gave up on sleep,
and my feet were on the floor
just as the first meadowlark
sent its gorgeous song into the
brightening red sky. 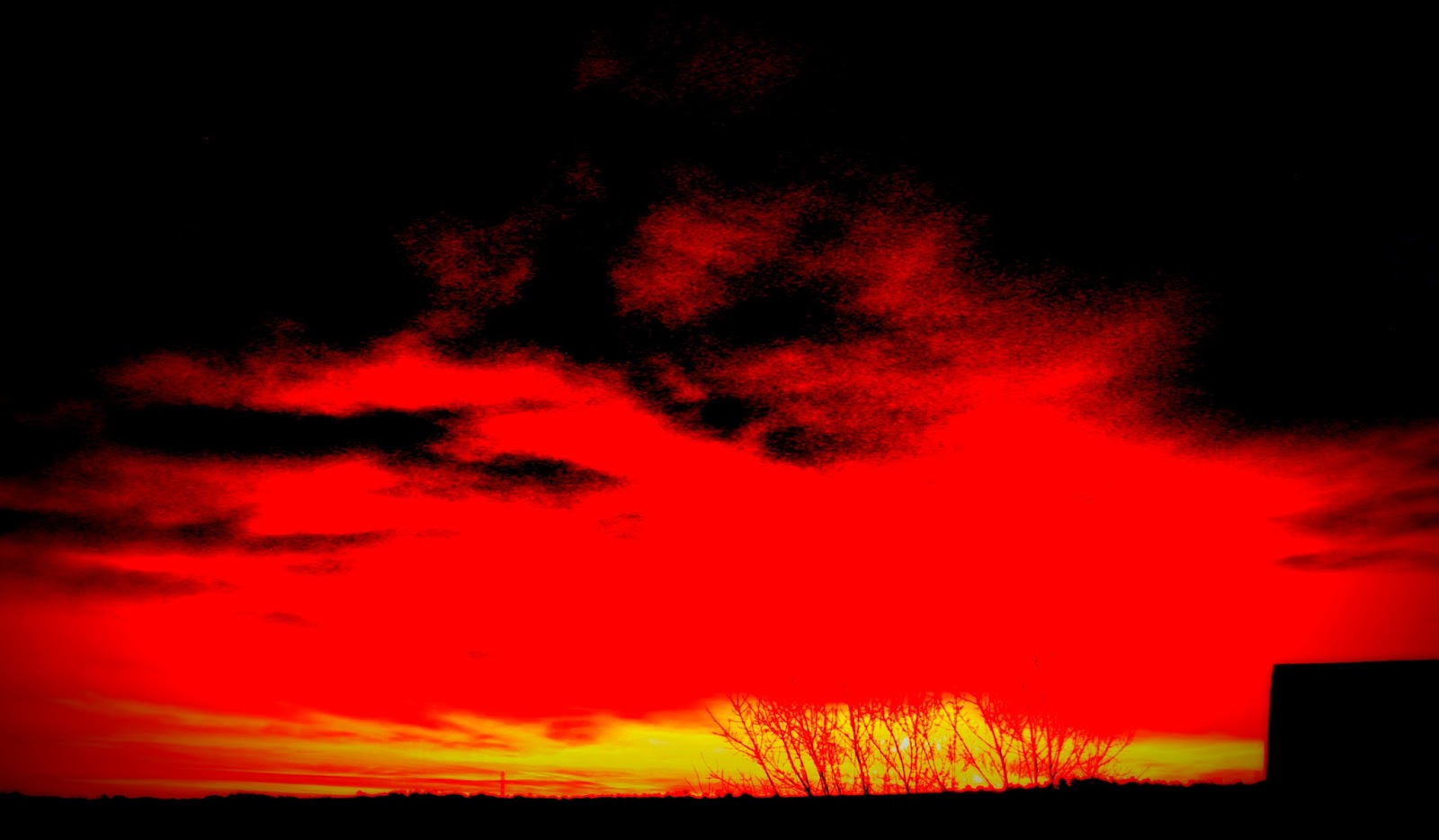 I had been worrying about Boomer.
Not just Boomer,
but Paj, and Ben, and even Reggie
(whom I've heard
from a reliable source can be a pistol!)

Boomer is a gorgeous brown Clydesdale
with a white face and nose,
and four big white feathery feet.
He lives on Moondance Ranch
somewhere south of me.
I've never met Boomer,
but I took his picture in a parade last December. 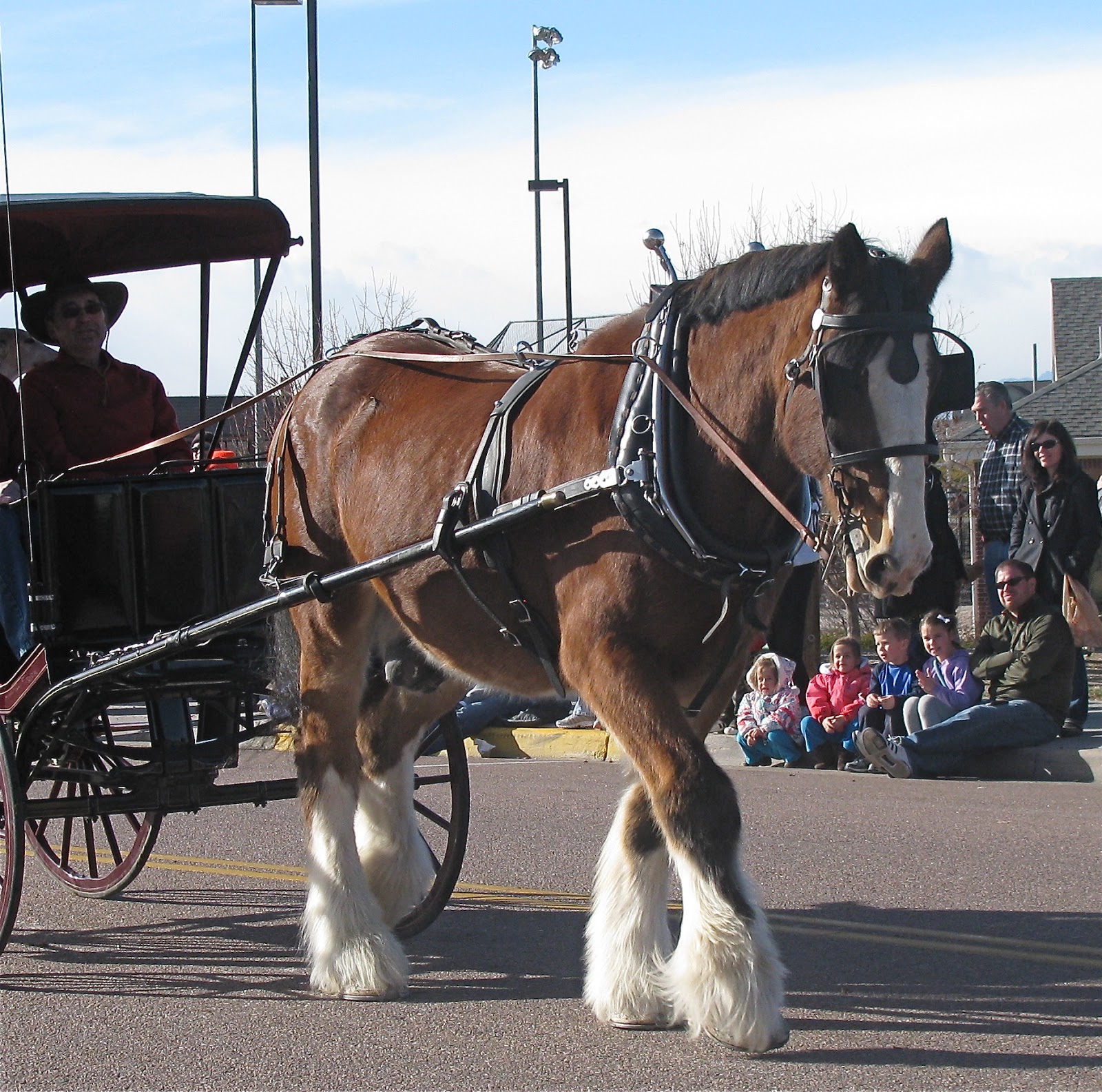 
I’ve never met Boomer,
but I’d love to sometime.
I’d like to pat his pretty nose
and feed him some carrots or apples ~
even though I am frightened of horses.

I could tell my life story in horses!
Horses and I have not had an easy time of it
when our paths have crossed in the past.

Horses can size me up in a nanosecond.
Horses like to mess with my head.
Horses have laughed at me.

I swear I've heard one horse say
to another with a wink,
"Watch the fun I have
when This One gets in the saddle!"

This One would be Moi.
And yes, that horse had a great time
and no doubt shared Big Horse Laughs
with his Bud when the fun was over.

If you don't believe that,
then you don't know horses!

So why would I be losing sleep
over a horse I've never met
who lives somewhere south of me?

Why would I be out on our deck
in the dark of night
checking the horizons
and sniffing in the air in deep, slow breaths?

That night had been a typical evening
for the E-P and me ~
well, except for that awesome fourth game
in the Stanley Cup Finals
between Chicago and Boston.
I love watching the boys on their skates
battling it out with their sticks ~
especially in overtime. 
The only things
that would have made the game better
would have been a few rowdy Canadians
tossing an octopus or two out onto the ice
or more frequent and harder body checks
and pounding among the players.

After the game was over the E-P went to bed,
and I went into my study
to wrestle with a poem I was writing.

Me!  A poem!
I rarely read them.
I never write them.

An utterly unexpected flow of words
had hopped out my fingers the day before
and had landed in my computer.

I worked on the meter of the poem,
trying to match it to the beat
in a favorite blues song.

Boomer!
I took a deep breathe,
I suddenly smelled something NOT GOOD!

I smelled smoke.
Not Smoke-That-Is-Okay,
but smoke that is definitely Bad.

I smelled smoke from burning trees.
Boomer!  Boomer and his buds!

I was on our deck in a heartbeat
scanning and smelling the dark night.
I thought the Black Forest Fire
was no longer a danger.
All that smoke had cleared out earlier.
Why were there shadows of fire smoke
whispering along Piney Creek?

Do you think
I could find anything on the TV ~ NOT!!!

Out on the deck again I scanned and smelled.
Just thin smoke drifting.
Safe enough to go to bed,
but not to sleep.

Words from my poem ran through my head:

I can't think.
But I can feel.
Don't want to feel,
but to forget.

I wanted to sleep
and not remember
the sounds of horses screaming in the night.

Put horses and fire together
and I get very, very anxious.

Horses and fires together
have crossed my path twice in life.
NOT GOOD!

Mostly I think of my second real memory.
I think of
The Night the Horses Screamed.

Horses plagued my earliest nightmares,
and they have haunted my waking dreams.

That long ago night with smoke on the wind
was in Charlottelown, Prince Edward Island, Canada.

I was really small, maybe 2 ½ or 3 years old:
Small enough to stand with my feet on the window sill;

Small enough to have to hold my hands
just above my head
to grip the wooden rail
on either side of the catch
on the lower part
of the double-hung window;

Small enough to be wearing one piece PJs,
pink-footed and fuzzy.

I may have been really small,
but I was big enough and smart enough
to know that I had to hang on really tight
because I was two stories up
and I was afraid of heights.

I was big enough and smart enough
to know that those screaming sirens
and flashing lights
slicing through the dark
and racing down Fitzroy Street
toward the racetrack and the stables were
BAD NEWS!

I was big enough and smart enough
to know my Great Uncle Chester had race horses,
and one or more of them might be in those stables.

Ha!  They didn't call me Big Ears for nothing!
I knew many things
that might surprise the adults around me. 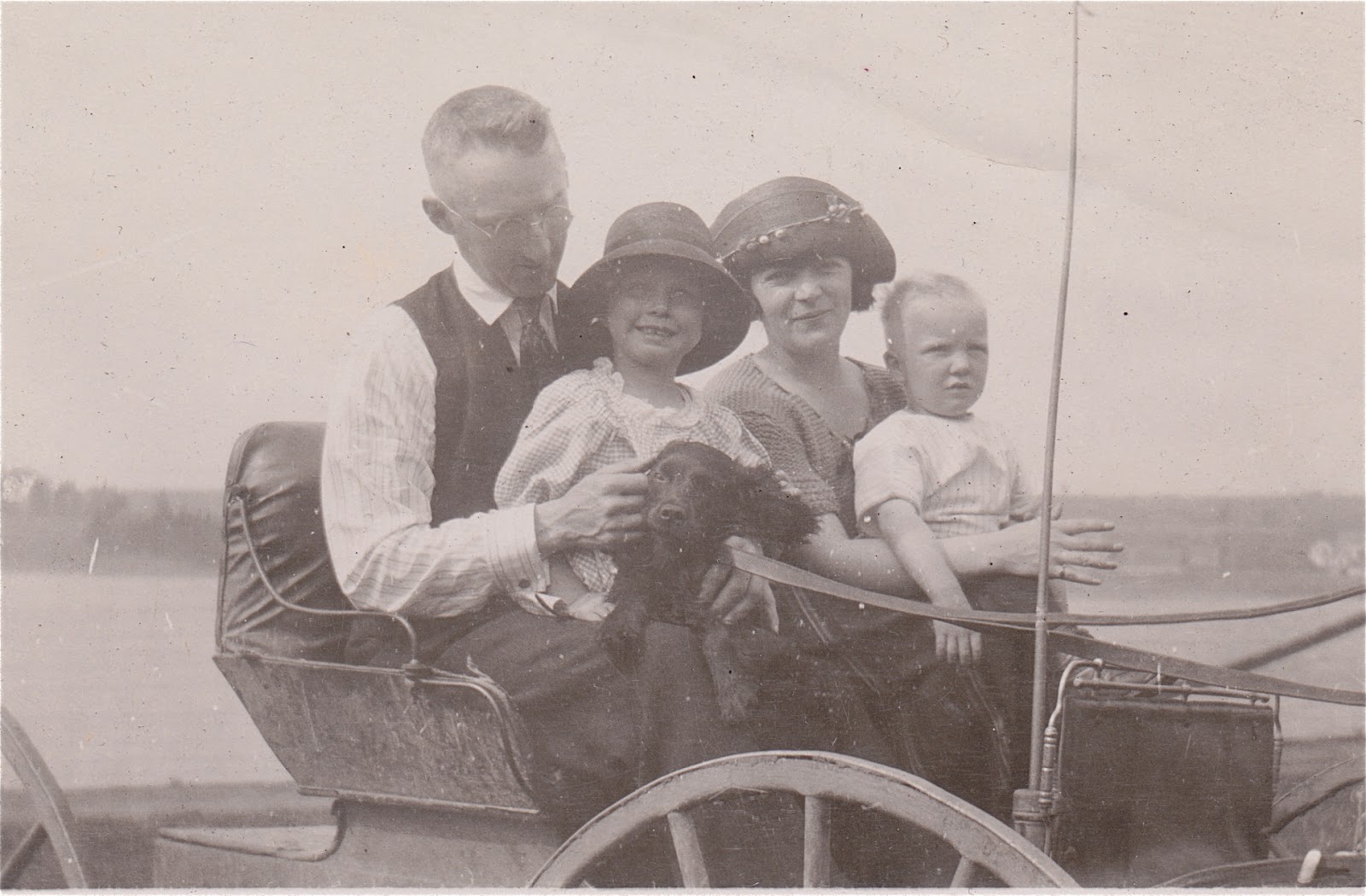 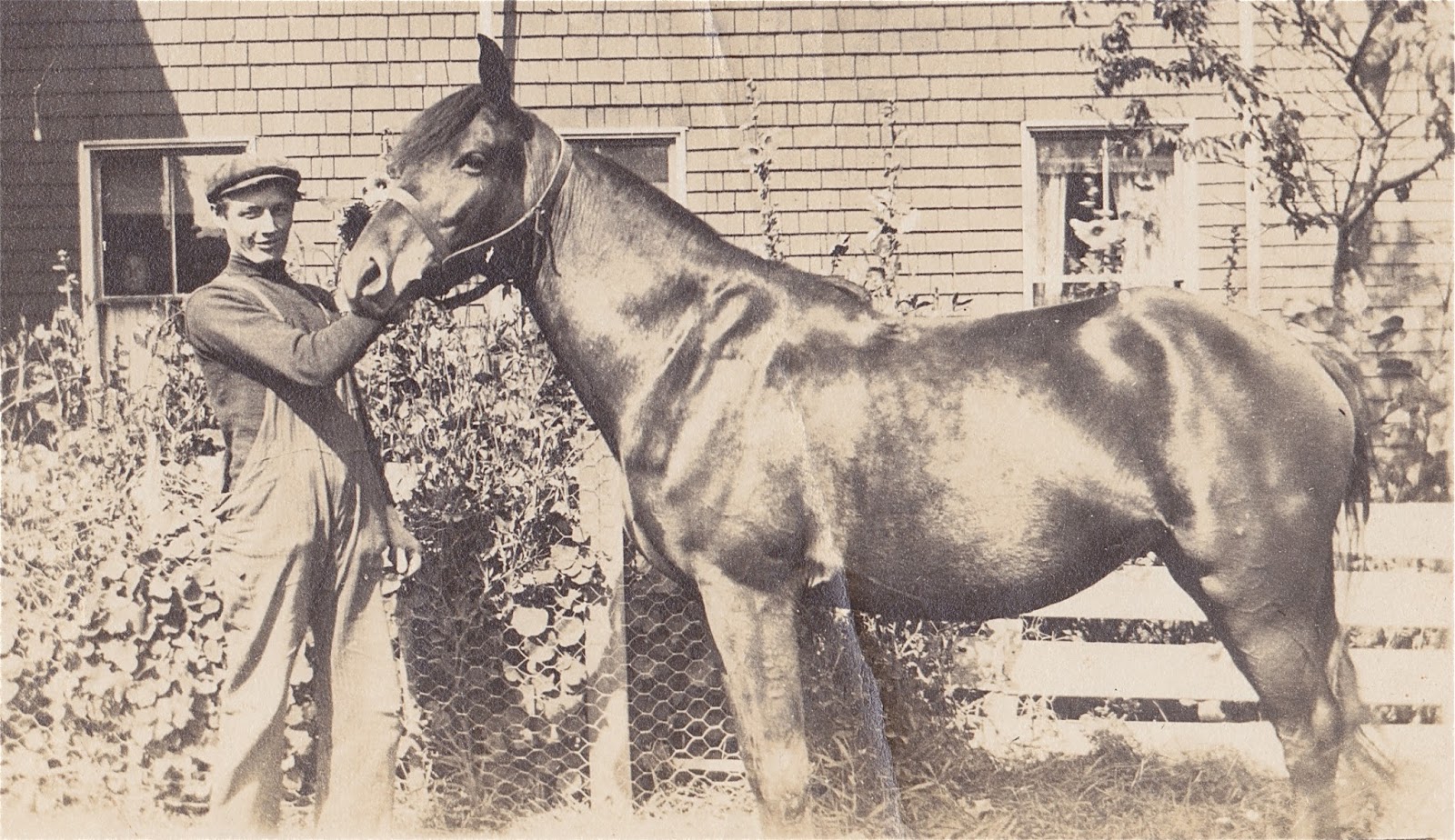 The horse is likely one of my Great Uncle Chester's race horses.

Photo:  "This is my driver held by ???"
(confusing notation of UC's  because the driver is the "jockey" in sulky racing)

The horse would race in harness pulling a light-weight cart or sulky.
A driver sits in the cart and guides the horse in sulky racing.

I was big enough and smart enough
to know horses were trapped.
I could hear the horses screaming in the night.

I knew the horses were terrified
in the smoky, flame-licked dark.

I knew that they were trapped in their stalls
and very, very afraid!

I heard their screams,
and I knew that some of them would die.

I clung between the rail and the sill,
and I cried into the dark too,
because I could hear them, the panicked horses.
And then I screamed into the night too.

My mom burst into my bedroom,
grabbed me from the window frame,
and held me tight,
rocking me in her lap on the bed,
shushing me and telling me
that the horses would be fine.

I told her I could hear their screams.

She told me it was my imagination.
That I couldn't possibly hear horses screaming.
That they were too far away.
Besides, even she and Daddy
didn't know yet where the fire was.
She told me Uncle Chester's horses would be fine,
and she held me in the dark
until I fell into a fitful sleep. 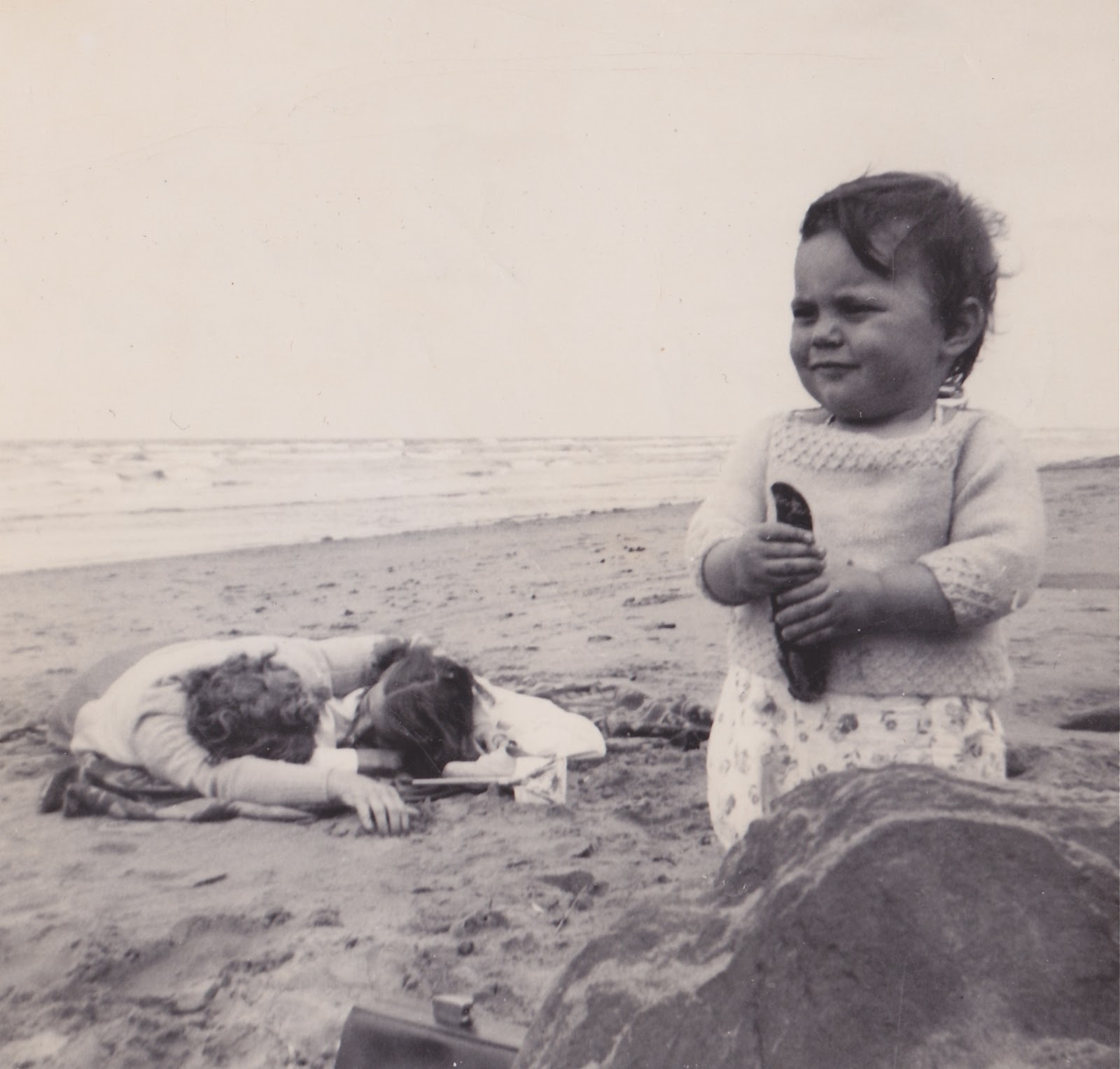 My grandmother Ella MacDonald
with my mother Sara MacBeath
and me (Weesie, holding a razor clam)
at Stanhope Beach, Prince Edward Island

The next morning I asked
about the horses and the fire.
Mom said that, yes,
there had been a fire at the stables
but that all the horses were fine.

"But Mommy, I heard their screams!"

"You were just imagining things, Weesie,"
she said.

Well, I was big enough and smart enough already
to know that sometimes parents
told you things that weren't true.
So you wouldn't feel bad or worry.

So Big Ears listened and learned.
Learned that some panicked horses
had died in the fire.
But not Uncle Chester's.

Learned and wondered why it is that parents
don't believe you when you tell them
you hear horses screaming in the dark.

The dawn was red red yesterday
stained by a thin veil of smoke.

On the morning news I learned
that the Lime Gulch Fire was burning
in Jefferson County,
and I realized that the smoke had come
from this new fire and that
Jeffco and Moondance Ranch
were probably far enough apart
for Boomer and buds to be A-OK.

This morning
(which thankfully had a soft pink dawn)
with sweaty palms,
I started googling Charlottetown,
the intersection of Fitzroy and Edward
where our house was,
and the location of the racetrack.

A straight line from my window to the racetrack
was a distance of about 3,000 feet.

I also googled horses screaming
and discovered that
their high-pitched, ear-piercing screams
can travel surprising distances,
well over 3,000 feet.

This-peep won't ever forget
The Night the Horses Screamed and Died.

It was not This Peep's imagination!


Here is a link to where
Boomer and buds hang out:
Moondance Ranch