The Lansdowne Letters: To Hell with the Stepping Stones


Whenever a letter arrived
from my father,
my mother sat us down
after the supper dishes were done
and shared it with we five.

Then I snapped it up
to pore over it myself.
I wanted to step through Dad's words
and into his adventures
in the wild and mysterious North.

Tens years old,
I was in Grade 5
in Smith's Cove, Nova Scotia,
and we were studying
Canadian History for the first time.

My mind was filled with romantic tales
of the voyageurs, the priests,
and the Hudson Bay Company
pushing into the unknown bush. 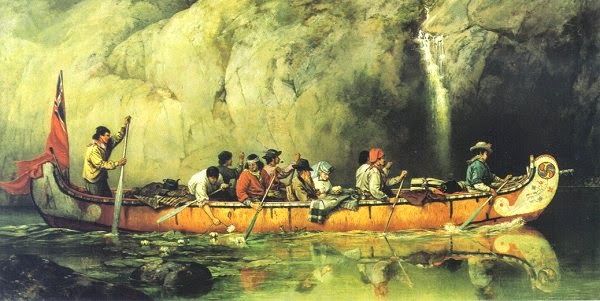 
I couldn't wait to take Dad's latest letter
to school the next day
to share it with my teacher and classmates.

To me, Dad was an adventurer too ~
but, well, maybe not quite a voyageur! 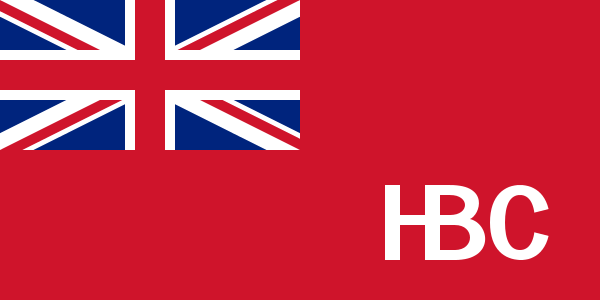 I may have started off this week slowly,
but I’m sure finishing it with a bang.

I woke up this morning,
and from the sound and direction of the wind,
I knew that I was in for trouble.

It was in from the north
at about thirty miles an hour,
and not even a barbed wire fence
to break the wind
where it blows over the strip of water
that I have to cross to get to school. 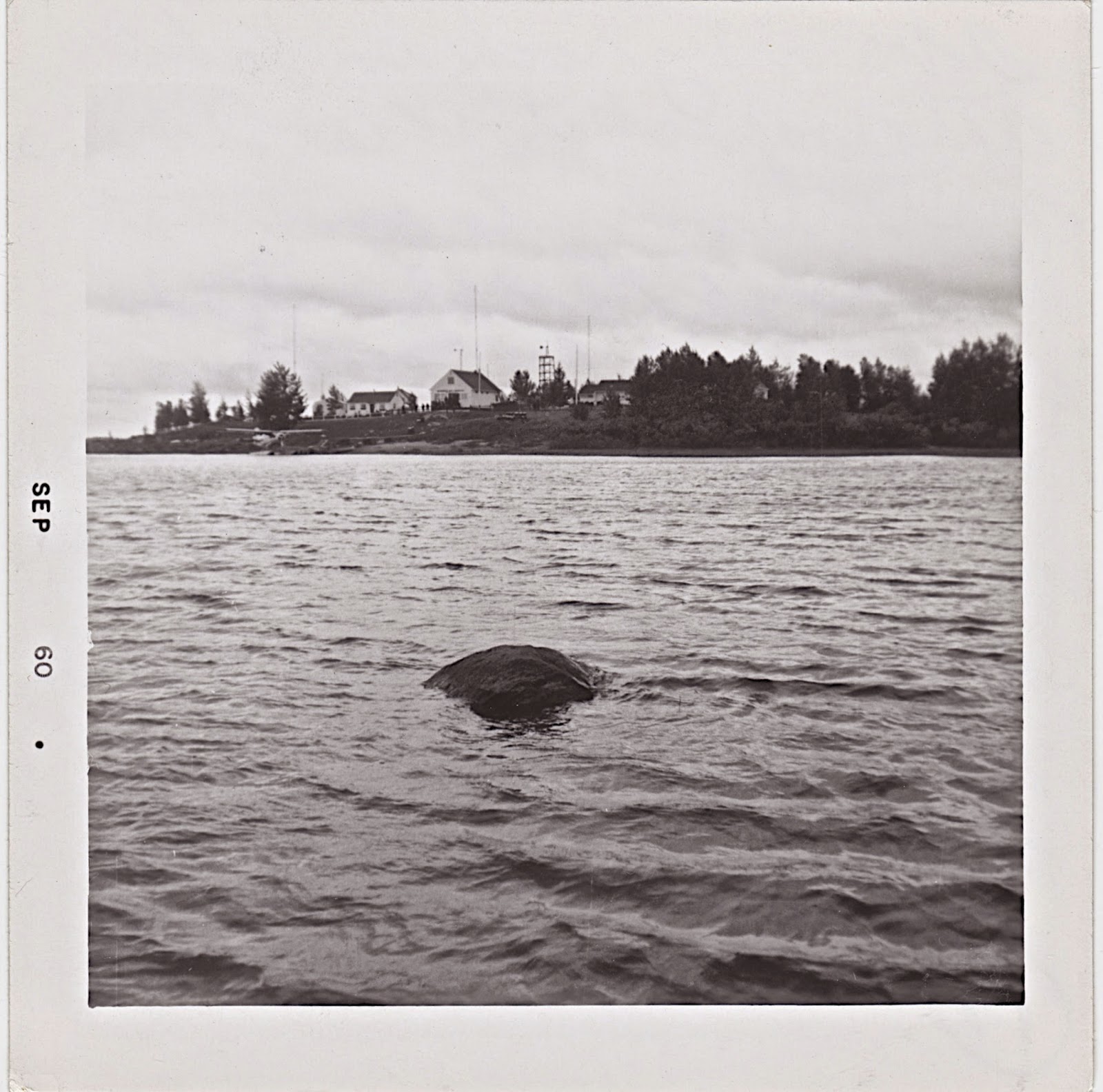 Canoe Route
This is strip of water my father had to cross with his canoe one or more times a day.
He landed at the dock by the bush plane in the photo.
The Hudson Bay Post is the closest white building in the photo.
Photo by Don MacBeath,  Fall of 1960
© M. Louise (MacBeath) Barbour/Fundy Blue
All Rights Reserved

I got up and had breakfast
and then went down to try to launch the canoe,
but as soon as I took it out of the bushes where I keep it,
the wind got it and started blowing it along the beach.

Right then I said to myself,
“I’ll never get across in this, this morning.
If I can’t control it on land,
what will I ever do with it in the water?”

I managed to wrestle it back into the bushes
and tried to get up courage to cross
the way some of the more agile Indians do.

The water is very low now,
and if you are quite agile
like some of the younger Indians,
you can get across on the rocks,
where the island is separated
from the mainland by about 150 feet.

Did you ever try crossing a brook
150 feet wide on slippery stepping stones?
And with a thirty mile per hour wind blowing yet?

I very shortly discovered
that I’m not an Indian,
at least not a young agile one.


I came to this conclusion
about half way across,
just after I missed
one of the stepping stones
and found myself sitting in
about two and one half feet
of icy water.


I was so cheesed off by this time
that I just waded back to the island ~
to hell with the stepping stones.

After changing all my clothes
and hanging the wet ones up to dry,
I went down to the beach
to have another go at the canoe.

Luckily there was an Indian
just heading across on the rocks.

I gave him a holler,
and he helped me launch the canoe
and paddle it across.

I was pretty well soaked by the time I got over,
because we were running broadside to the waves,
and we were shipping water at every wave.

However, I got to school about an hour late,
and about fifteen minutes later,
after frantically ringing the school bell,
I managed to round up
most of my children and start school.

I had to change my socks and shoes
which were very wet,
but I very early learned
to keep a dry pair of shoes
and several pairs of socks in the school,
so this presented no problem.

By noon the wind had pretty well died down,
and I had no more trouble getting back and forth.

This afternoon our chesterfield
arrived by plane from Nakina.
The Father hauled it across in his big freighter canoe.

This evening Brian Booth,
the clerk at the Bay was over visiting us,
and I played cribbage with him and Uno.
After he left, I sat down and banged this out. 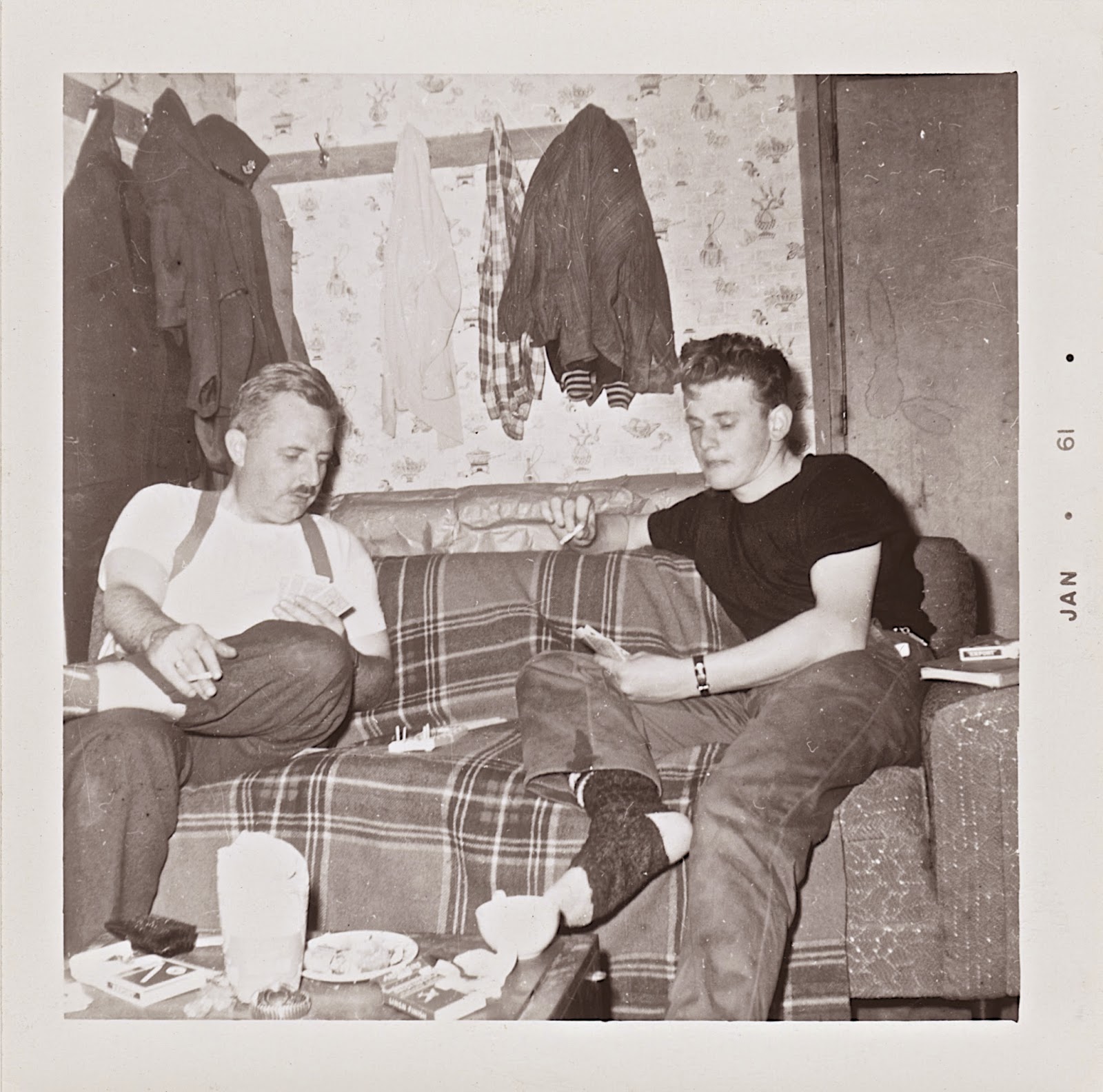 
Nothing else of note happened today (thanks goodness),
so I guess I will sign off for the night.
Will be talking to you all tomorrow again. Dad's misadventures with his
Hudson Bay Company canoe
never failed to entertain us,
nor did they discourage me.
In my imagination and dreams,
I became an adventurer, a voyageur, too.

And, as I later found out,
dreams can come true! 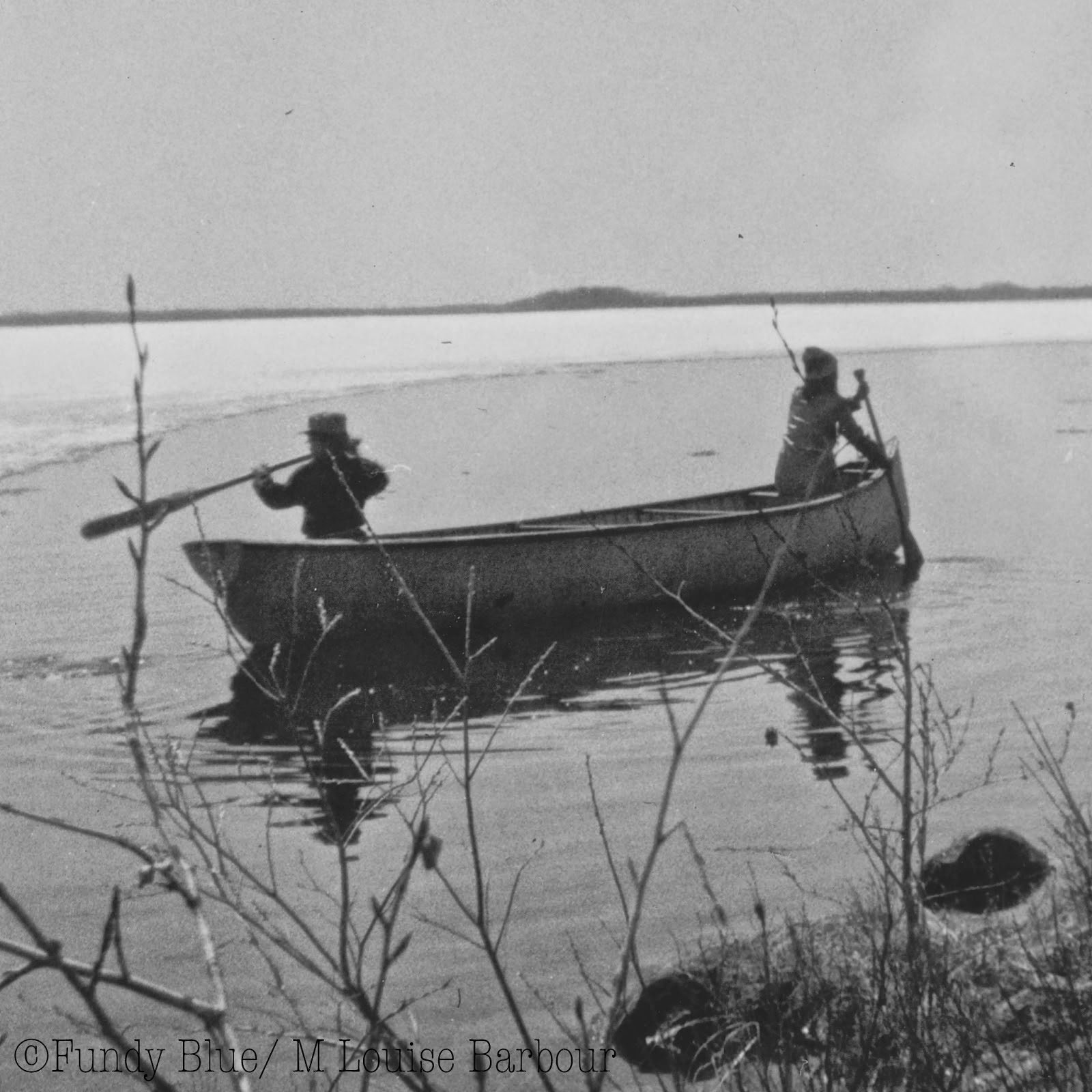 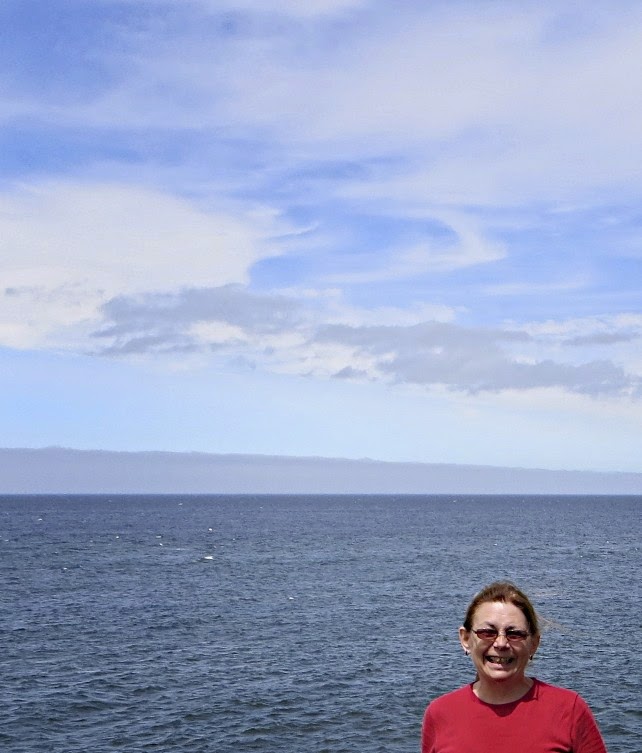