Beautiful Victoria, British Columbia: In, Out, and Around Beacon Hill Park


Yesterday, the first Saturday in October,
was glorious here in Victoria, British Columbia,
the perfect day for a long, leisurely walk
in, out, and around Beacon Hill Park. 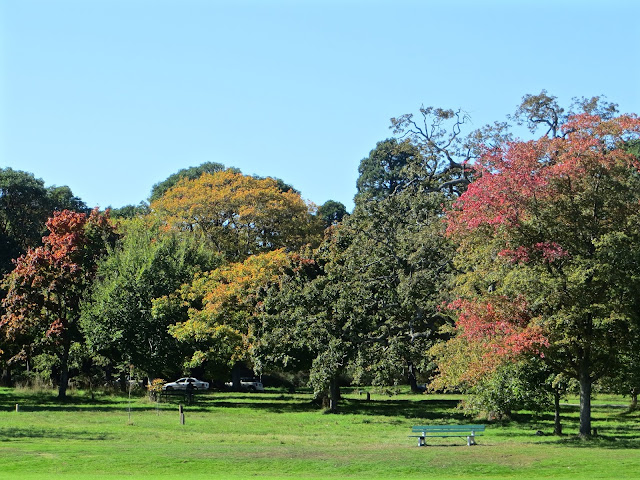 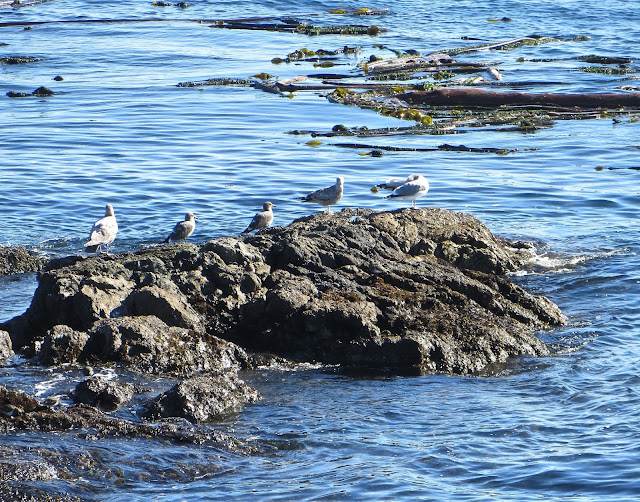 Along the Seashore by the Park
Juan de Fuca Strait


Beacon Hill Park is magnificent,
and Sir James Douglas, the governor of
the Colony of Vancouver Island
protected the area in 1858.

The City of Victoria officially made it a municipal park in 1882,
and today it is the biggest public park in the city,
historically significant and a refuge for native ecosystems. 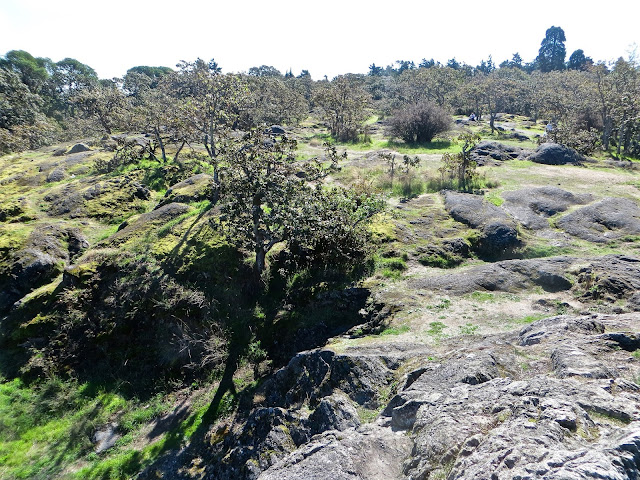 Some 80 acres are more natural,
but the rest is taken up by infrastructure,
buildings, sports fields, gardens, even
private sports clubs and a children's farm.
beaconhillparkhistory


Walking for miles can be a thirsty, hungry adventure,
but Cook Street with its restaurants, pubs, and coffee cafes
is steps out of the east side of the park.

Terry took me to Rica Salsa, a wonderful
Mexican restaurant, just off Cook Street.
One of the friendly owners has cousins
living in our home city of Aurora, Colorado!

We had a grand conversation while he cooked
and assembled fresh, flavorful beef and pork soft tacos. 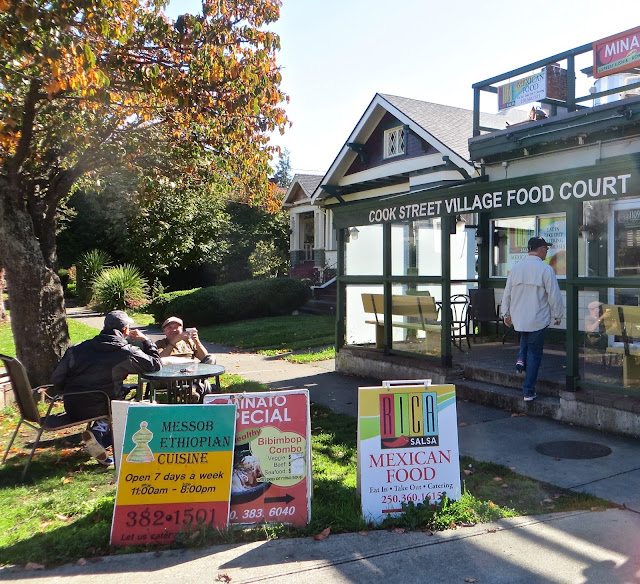 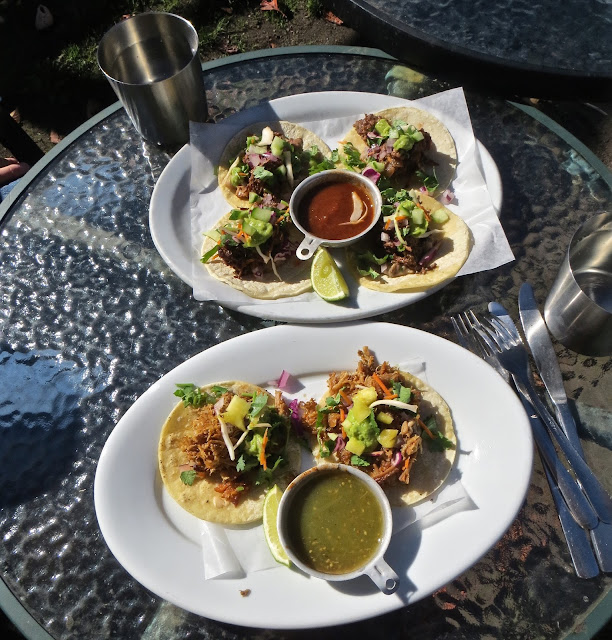 After lunch we randomly roamed through the park and along the seashore,
enjoying the warm sunshine and varied scenery. 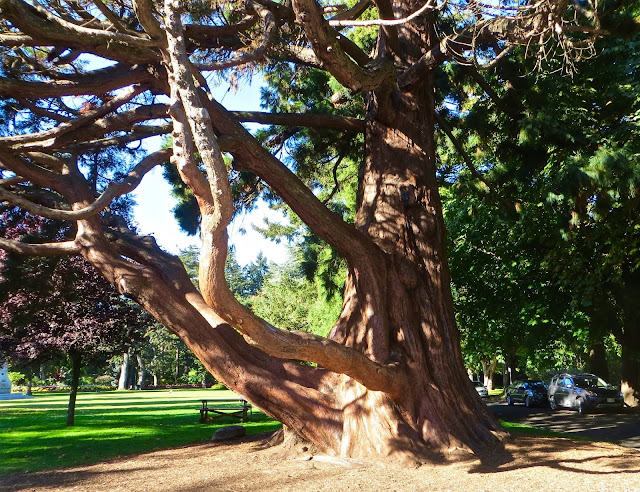 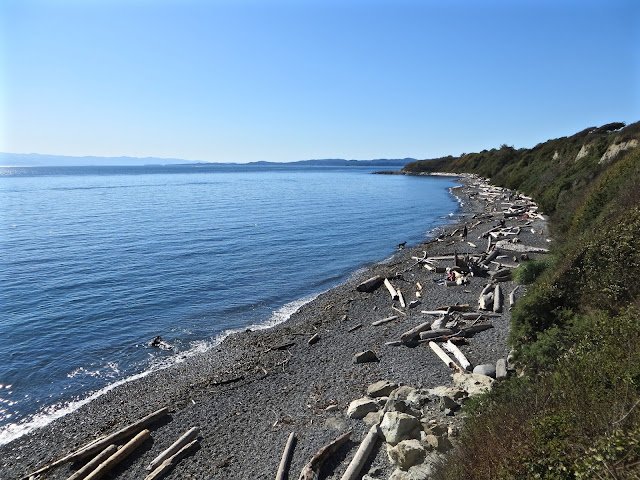 Along the Park's Sea Cliff and Shore 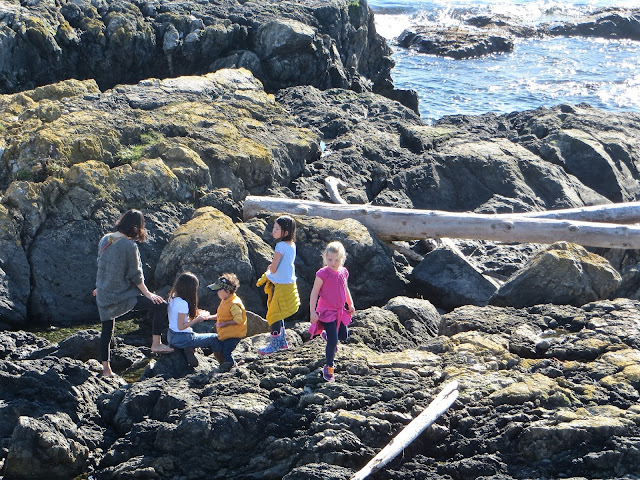 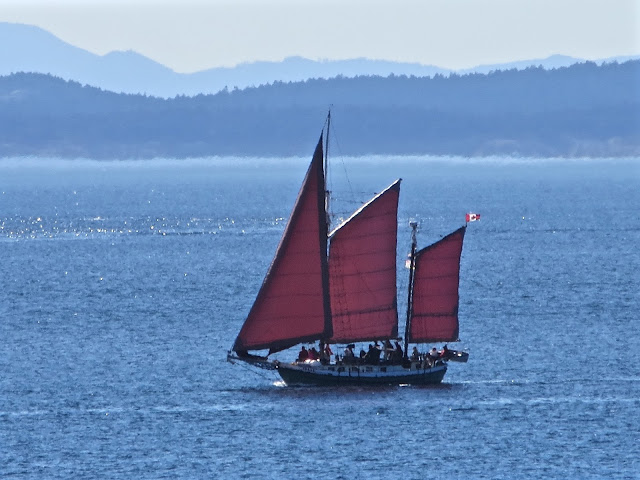 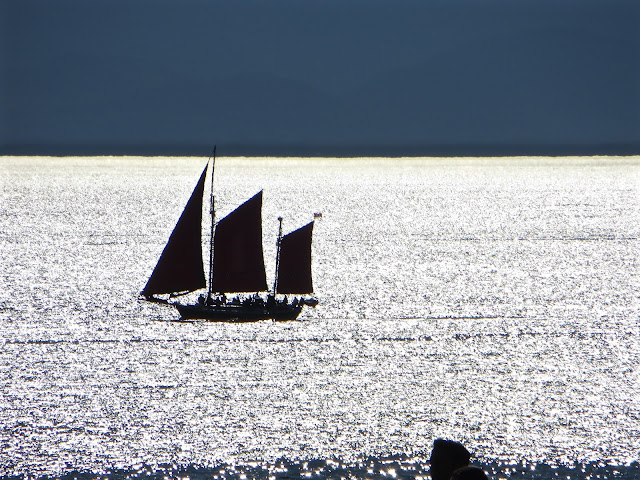 What a Difference the Light Makes!
The Same Sailboat Not Two Minutes Later (in Color!) 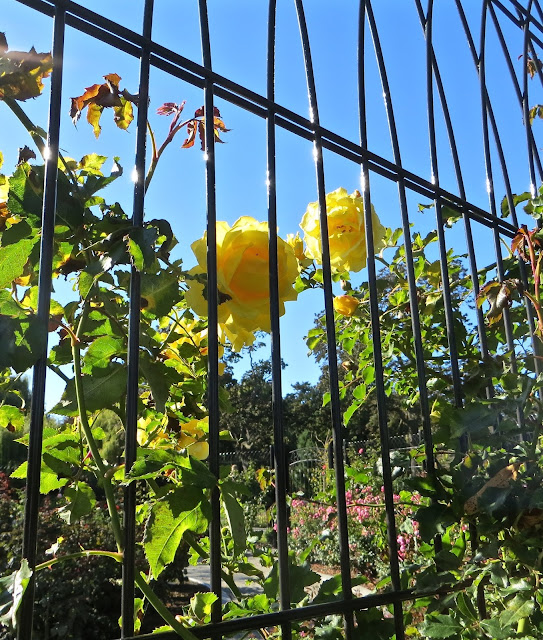 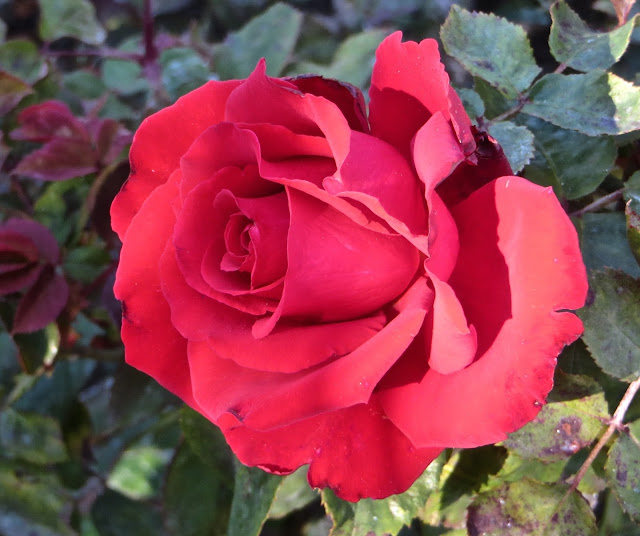 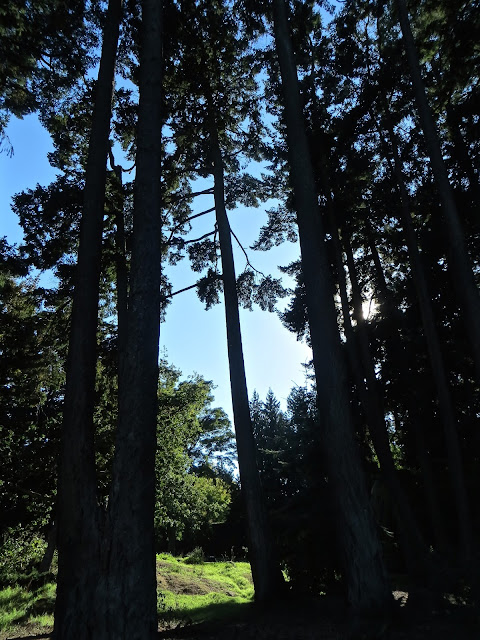 One of the Wooded Areas in the Park 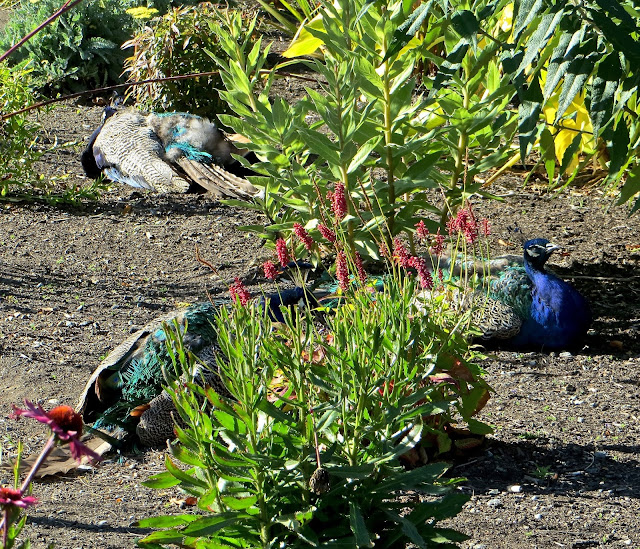 Peacocks Love This Garden Adjacent to the Rose Garden 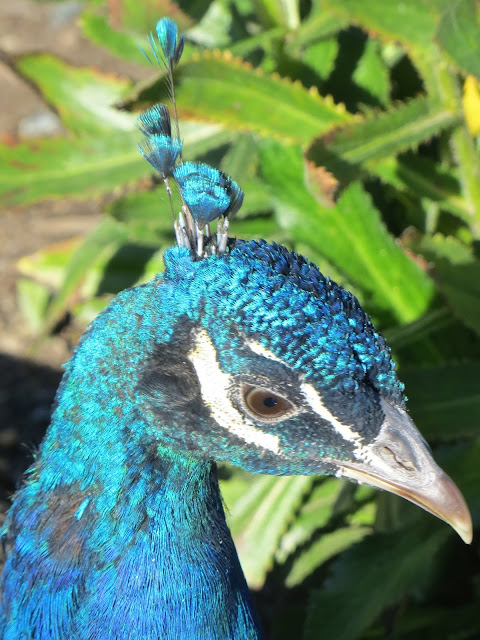 There are many popular outdoor activities in the park,
among them watching the waterbirds along Goodacre Lake.
Getting handouts from the visitors is very popular with the birds! 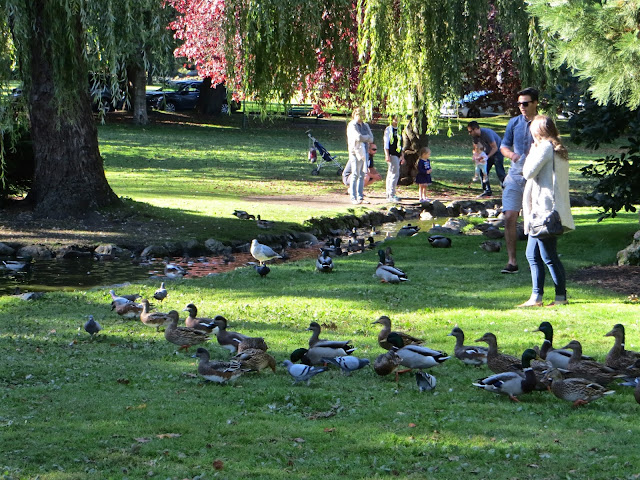 On sunny days, the turtles get this spot;
on grey days the ducks take over.
These may be the most photographed turtles
on Vancouver Island! 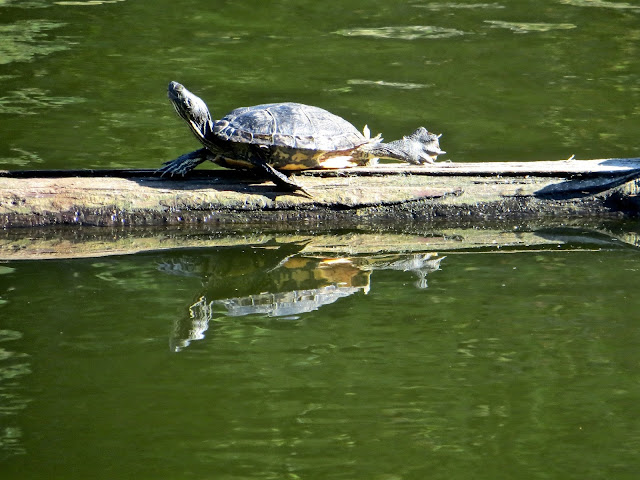 Stretching in the Sun 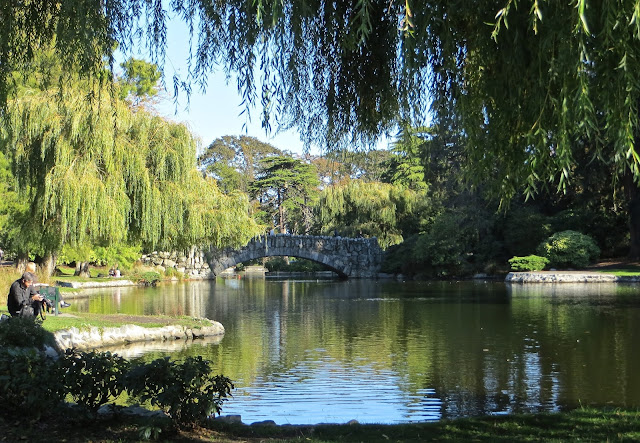 Goodacre Lake with Its Pebble Bridge,
a Tribute to BC Artist Emily Carr

My favorite spots in the park are natural areas
where knobs of bedrock stick out.
It's fun to climb all over them,
but it's also fun to think about their origin.

The outcrops are small roche moutonnées or sheepbacks
formed by moving glaciers that smoothed over the rock surface
on the upstream side and plucked out rock on the downstream side.

The rocks themselves are metamorphic migmatites
formed deep in the crust from gabbros and granodiorite. 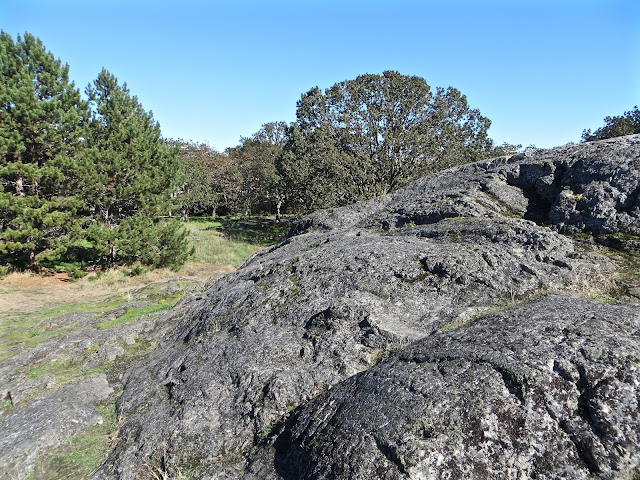 The Smooth Side of the Sheepback

I have the layout of this huge park internalized,
but Terry and I have just scratched the surface
of what you can see, do, and learn in this Victoria treasure.

You really can't say you've seen the best of Victoria
if you haven't been to beautiful Beacon Hill Park!

I couldn't find any maps I could post,
but here are links to a couple if you are so inclined.

1.  The best map of the park I could find;
scroll to the bottom of the page:  map