In my last northern post I shared how my father
approached the challenges of isolation and loneliness
in the remote village of Lansdowne House
in the wilderness of northwestern Ontario.
He focused on remaining busy and never letting himself go. 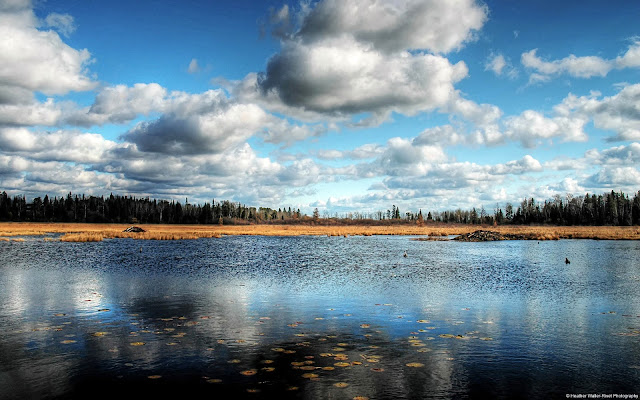 Before I, myself, went north,
I had no concept of what being cut off from civilization
for long periods of time meant.

I was entranced with the romance and mystery of the North:
Indians, coureur des bois, priests, vast landscapes,
northern nights with dancing skies, wolves, and
the monumental Hudson Bay Company
with its far-flung trading posts. 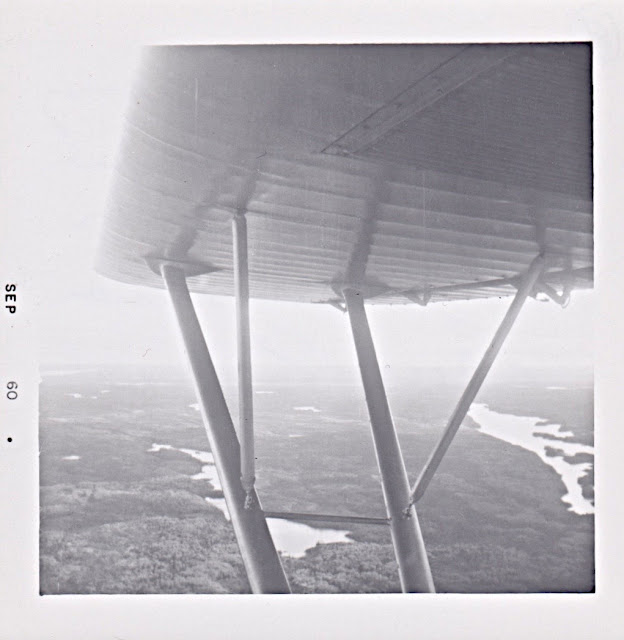 My Father's First Flight into the North
Photo by Donald MacBeath 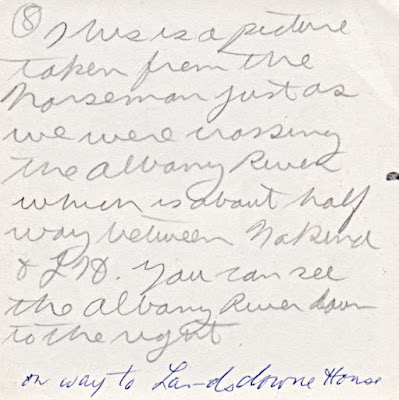 Dad's and Mom's Descriptions
"This is a picture taken from the Norseman
just as we were crossing the Albany River
which is about half way between Nakina and LH.
You can see the Albany River down to the right." (Dad)
"On way to Lansdowne House" (Mom)
Photo by Donald MacBeath
© M. Louise (MacBeath) Barbour/Fundy Blue
All Rights Reserved 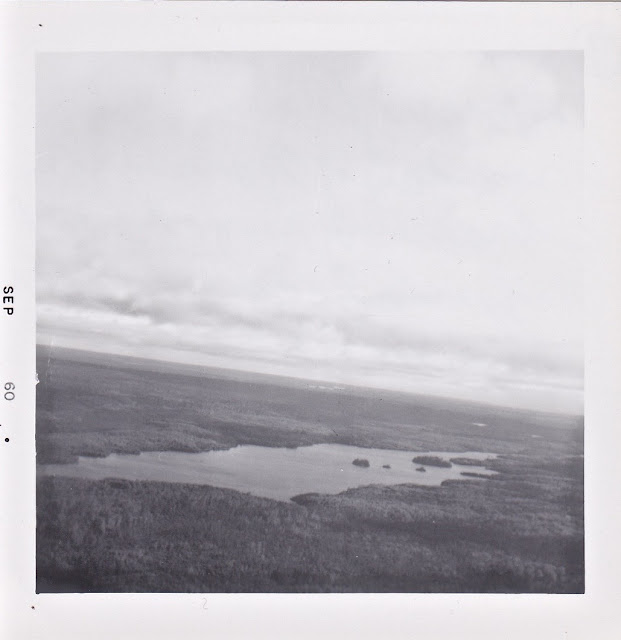 Into the Storied North
Dad flies over it for the first time.
Photo by Donald MacBeath
© M. Louise (MacBeath) Barbour/Fundy Blue
All Rights Reserved 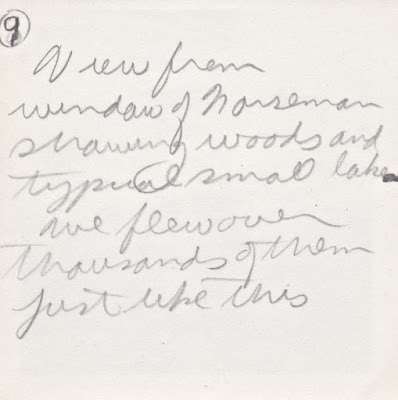 His Description
"View from window of Norseman showing woods and typical small lake.
We flew over thousands of them just like this."
Photo by Donald MacBeath
© M. Louise (MacBeath) Barbour/Fundy Blue
All Rights Reserved

The North drew me, as it had drawn my father and others.
I was an idealistic white ten year old
when I went into the wilderness in February 1961;
but I'm sure that there were also white adults
who went into the northern bush fueled by idealism,
a desire to make life better for the Indians,
and a longing to experience the mythical North.

And some, I'm guessing, were less prepared
and less knowledgeable than I was,
with untested inner resources and personal fortitude.


Some misjudged their ability
to handle the challenge
of leaving behind
all that was familiar
for the remote North.

And some of those
the bush broke.


They left bushed
and under very different circumstances
from when they had arrived.

When I went to Lansdowne House,
I overheard bits and pieces of stories discussed
by the adults within the tiny white community,
stories about forcibly removing bushed people
from different communities in the North.
I don't remember the details,
but I do remember their awareness
of the risks being in the North carried. 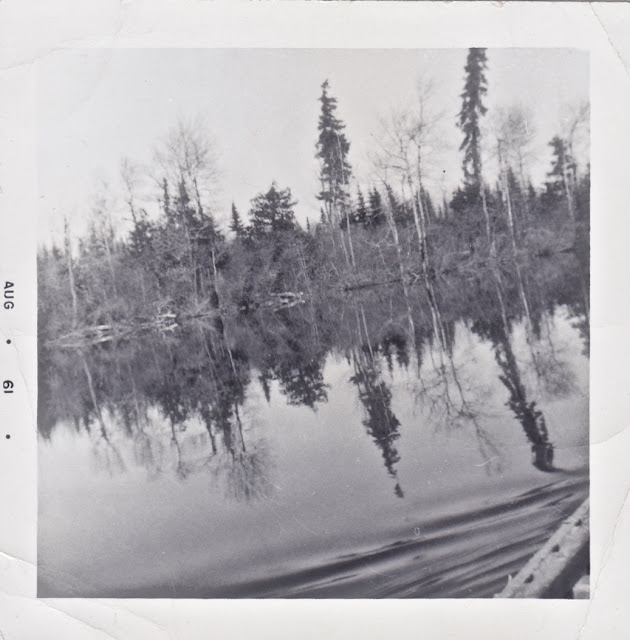 Reflections in Lake Attawapiskat
The Bush Around Lansdowne House


Here is one incident that my father wrote about
after he left the Indian Affairs Branch
in Sioux Lookout, Ontario:

"Another character we had let himself go
physically, emotionally, morally, and nutritionally.

"Oh, he always wore a white shirt and tie in school.
The only trouble was that the shirt
he was wearing when he went in in September,
was the same one that he was wearing
when they took him out in March.
I don't think it had been off his back in the interim,
most certainly it had never been cleaned.

"This character started off by not caring
about his personal appearance or  cleanliness.
This apparently threw him into a state of depression,
and he became very homesick and lonesome
for his wife and family.

"Then he got this ridiculous idea
that his wife was being unfaithful,
and he really hit the skids.

"He started making up to one of the squaws,
and a married one at that.
There was quite a scandal in the village.

"The husband came home from his trapline,
sized up the situation,
and forbade his wife to speak to the teacher.

"The squaw was apparently quite attracted to the teacher,
for she tried to shoot herself,
but only succeeded in shooting off a couple of fingers.

"As a result of the whole mess,
the teacher became exceedingly despondent,
and did not bother watching his diet to see
that he was getting the necessary nutritional elements.

"In March, he became seriously ill,
and we had to send a plane in
to rush him him out to the hospital.

"The local hospital in Sioux Lookout couldn't diagnose
what was wrong with him,
and he was rushed to Winnipeg General Hospital.

"He had scurvy of all things -
the first case the hospital had dealt with
for goodness knows how long."

I share this anecdote to underscore
the challenges of living in the remote North
cut off from contact with the Outside.
Sometimes the only contact available
was via shortwave radio,
if there was one in the community.

During his time in the North with the Indian Affairs Branch,
my father sometimes had to go into isolated places
and remove or help remove white people
who had suffered complete breakdowns.
It was a difficult task, made worse by the fact
that the bushed person often did not want to come out. 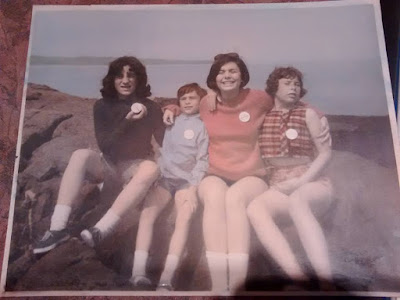 1.  Language:
Today many people find the terms Indian and, certainly, squaw offensive.
My father did not intend to be offensive.  These were the words used fifty years ago.

2.  Who?  Where?  When?
My father deliberately omitted information that would identify the teacher
and the Indian woman when he wrote his account of the sad, painful event.

3.  Source of Anecdote:
My father recounted this event in an unpublished paper he wrote while attending
St. Francis Xavier University in Antigonish, Nova Scotia in 1965 or 1966:
The Northern School Teacher:
A Hand Book to Be Issued to All New Entrants to the Teaching Profession
in Indian Schools in the Sioux Lookout Indian Agency 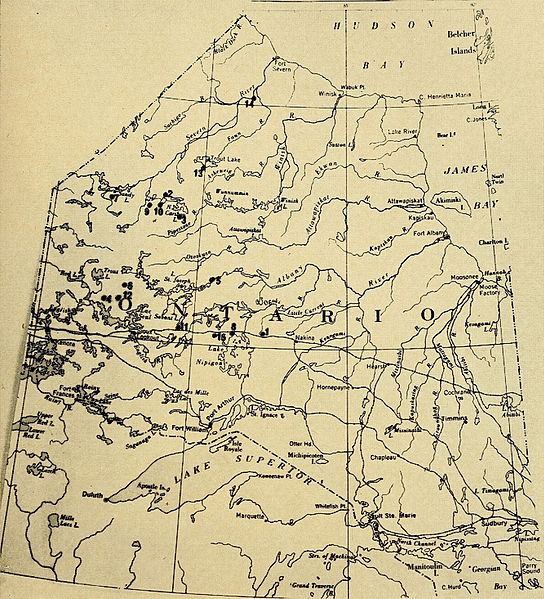