The Lansdowne Letters: A Lazy Luxury


This latest letter brings back such memories for me!
It's so Dad, and it's routine is written in my heart.

Occasionally people ask
(usually in some mixer or icebreaker activity),
"If you could spend an evening talking
with somebody famous who would it be?

Forget famous!
Hands down I would choose Father Ouimet!

How I wish I could spend one evening
at his kitchen table talking with him as an adult. 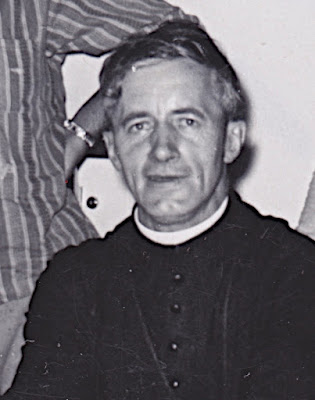 Is Everyone Ready?
Today’s edition is going to be short and sweet
as nothing very much happened to us,
and we did absolutely nothing ourselves.


We went to bed
about twelve thirty Saturday night
and slept right through till
ten fifteen this morning ...

when I awoke with a start
realizing that we had slept
through the alarm.


I got up immediately and spent the next forty-five minutes
getting the fire on and Uno awake and off to eleven o’clock Mass.

While Uno was in church, I got dressed,
had some coffee, and did my morning exercises.

After Mass, Mike and Anne stopped in and had a cup of tea.
They had Kathleen with them.
I can’t get over how cute Kathleen looked in the tikinagan.

I wanted to get a picture of the three of them today,
but I was out of flash bulbs, and it was too dark
to take any pictures in the cottage without flash bulbs.


After dinner I took in the washing
which had been out all night.
It was not completely dry,
so we draped it all over the house.


It was dry by suppertime, and it is all put away now.
The only clothes that I have that aren’t absolutely clean
are the ones that I am wearing right now.

After I finished draping the bedroom and living room with laundry,
I went to bed and slept for the rest of the afternoon.

Uno went over to Mitchell’s to see Brian
while I was snoozing.

At six o’clock we went over and had supper and sat around
for an hour or so talking to the Father and the Brother. 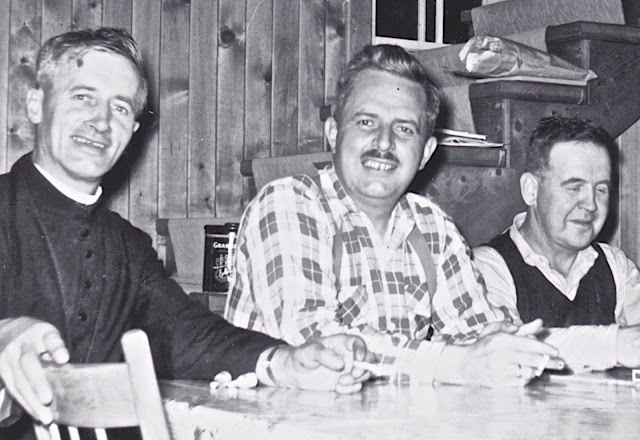 The Father fascinates me.
I have only met a couple of other people
with as much personality as he has.

He has personality to burn.
He is really a terrific individual.
The two of us get along just wonderful.

He has often told me that he likes talking to me, because
I am the first person that has ever come to Lansdowne House
who had an education even approaching his.

He is very well educated, like all the Oblate Fathers.
He has his B.A., M.A., B.D., and P. Lice.
This last degree is a degree granted by Oblate seminaries
and is rated as being half way between an M. A. and a Ph. D. 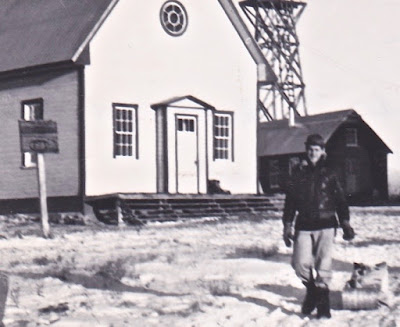 
When we came back from the Father’s,
I put away the laundry and spent the rest of the evening
writing this, except for an hour I spent with Duncan playing chess.

After Dunc left, I finished writing this,
and I went to bed.  Good night all. 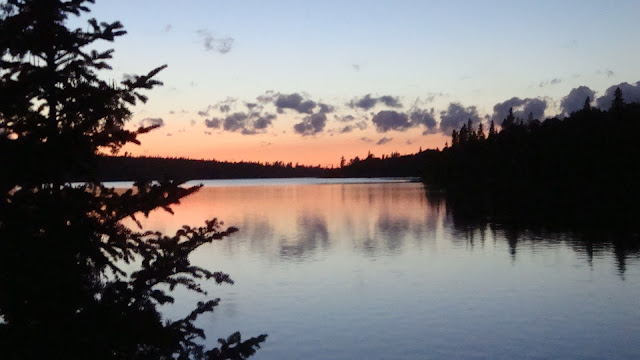 
I kick myself frequently over lost opportunities.

I have so many questions,
and the people who have the answers are dead.

Why didn't I take the time when they were alive
to ask the questions I have now?

I got so caught up with living my life
and took time for granted.
Now answers are much harder to find. 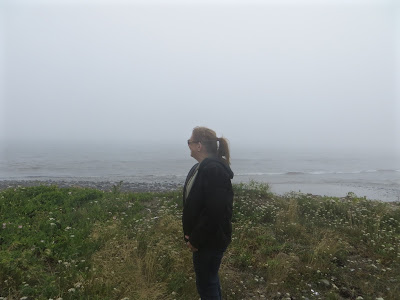 TLL: Things That Go Bump in the Night

1.  Photos:
Finding new photos that I can use is getting really hard!
Click here to see a recent photo that shows Father' Ouimet's Rectory on his island
(white double story building).

2.  Uno:  dad's roommate and teacher at the Catholic school

3.  Mike, Anne, and Kathleen Flaherty:
Mike was the nurse at the nursing station,
Anne was his half-Ojibwe wife,
and Kathleen was their baby daughter.
Dad never did get that photo, which I would dearly love to have.

4.  Dinner:
At that time, Canadians often referred to lunch as dinner and to dinner as supper.

7.  Duncan MacRae:
Dad's good friend Duncan lived on the Mainland.
Duncan worked for the Department of Transport,
and his duties included running the DOT Weather Station.

8.  Brian Booth:  The clerk at the Hudson Bay Post.

9.  Mitchell's:  Brian boarded with the Hudson Bay Manager, Bill Mitchell and his wife.