The world may not have ended on December 21st,
but weird things have been happening around my home this past week or so.
I looked out my window Thursday,
and there they were:
strange marks in the snow! 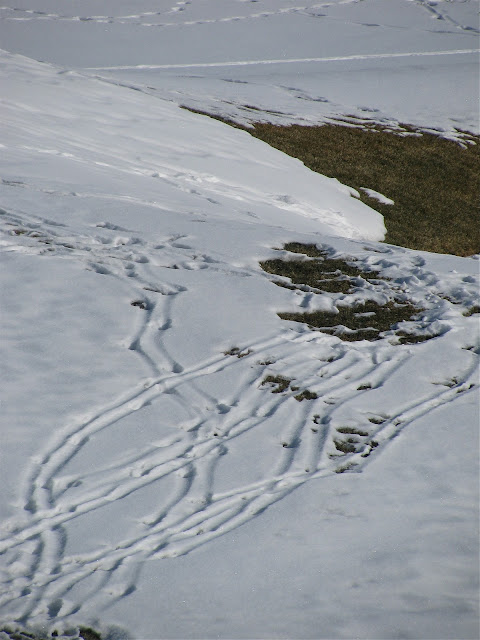 I looked out again on Friday,
and there were more! 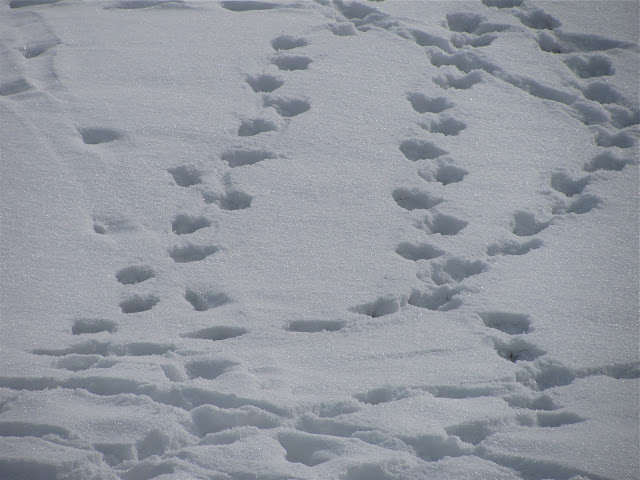 I began to think of my favorite labradoodle,
Sophie Doodle,
who found some mysterious tracks recently.
I was beginning to get a little creeped out. 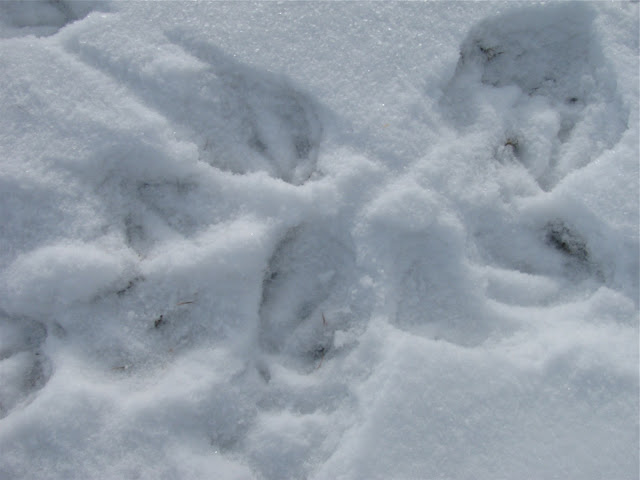 On Saturday:  MORE!
I had to go on walk 204 outside!
No way I was going by myself!
I made Terry go with me.
Seriously, have you ever seen anything like this? 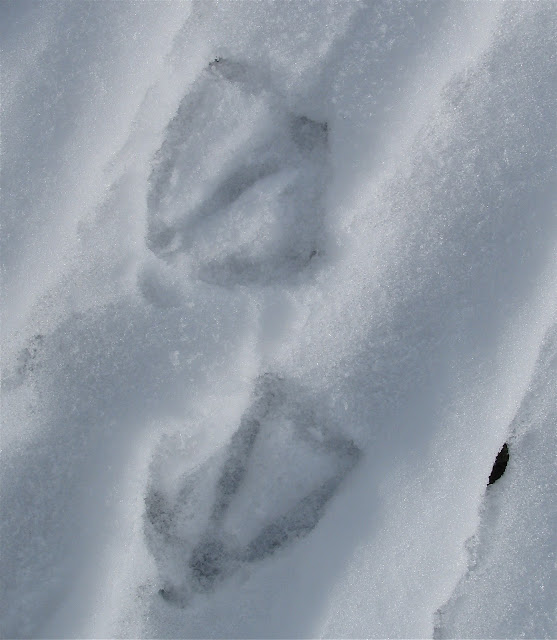 My husband, who would never think of aliens,
thinks I'm ridiculous on this cold Saturday morning
running around with my camera
snapping pictures of these weird marks in the snow.

Too late!
Suddenly a UFO swoops in for a landing! 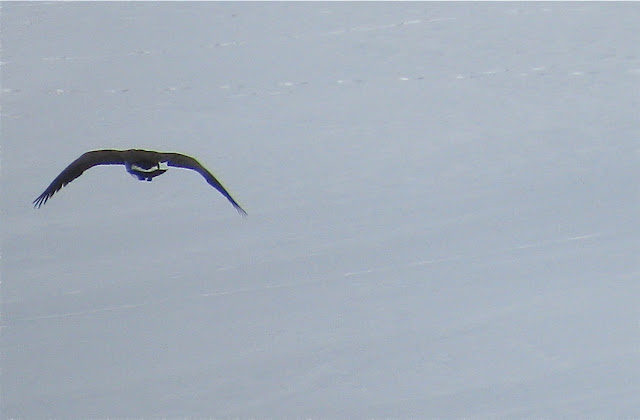 Give me a break!
It's the d-a-r-n Canadians again!
Even more are coming in for a landing! 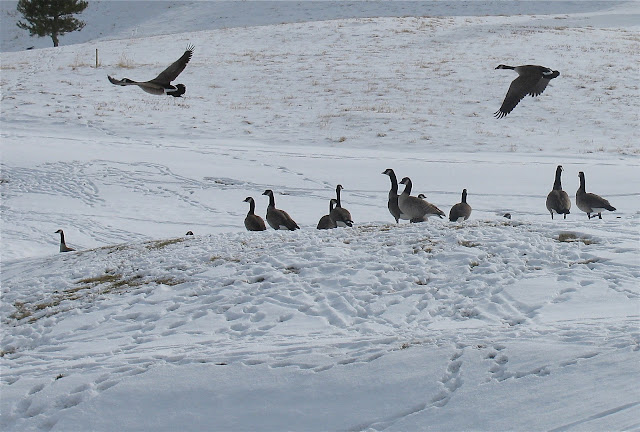 "You're American now," the Ever-Patient reminds me. 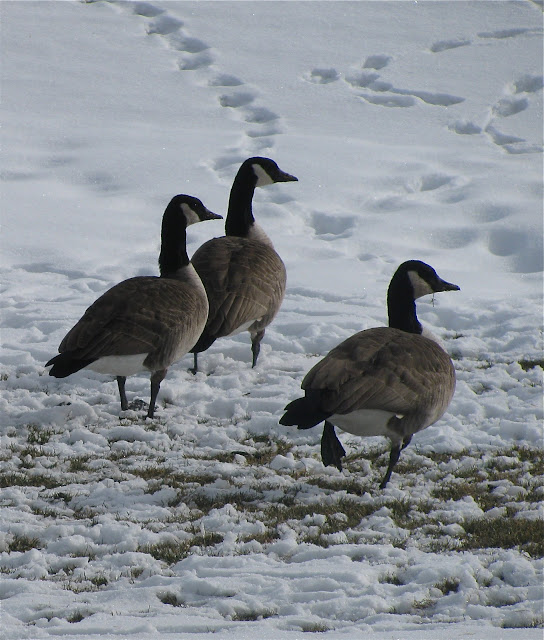 "Sorry, Honey,
but the Canada goose was named for John Canada who first identified the bird.
Remember when the librarian pointed that out to you."

"That's some urban legend.
They never did find any taxidermist or taxonomist named John Canada."

"You google it when we get home.
I bet you've never googled it.
You're just set in your Nanook of the North mentality.
You're such a Canuck!"

Terry calls me "Nanook" or "Canuck."
He likes to push my buttons.

My brother calls me "The Yank."
He likes to push my buttons. 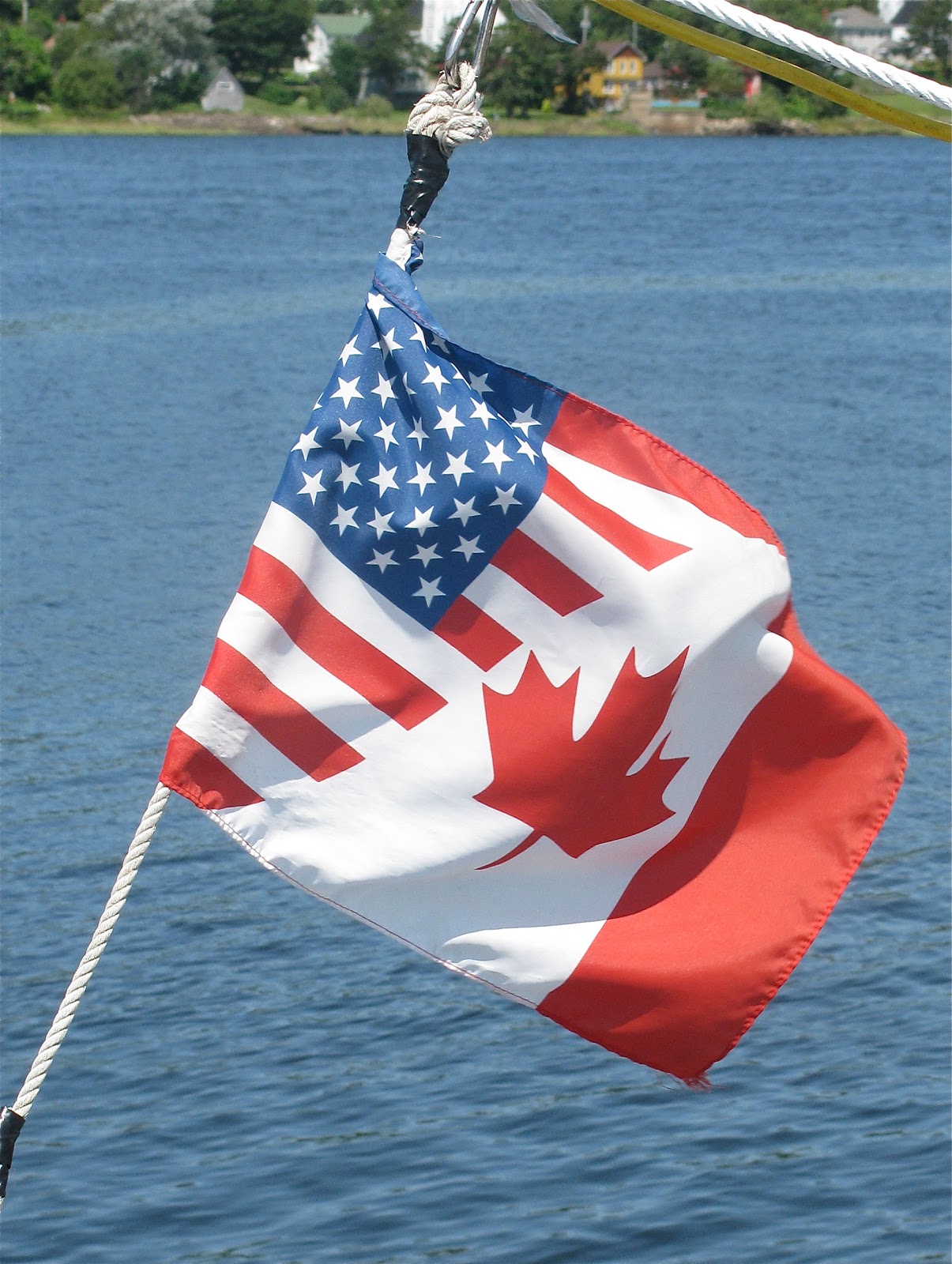 "Look at these damn birds!" said the E-P with rare exclamation marks.
"They're everywhere!" 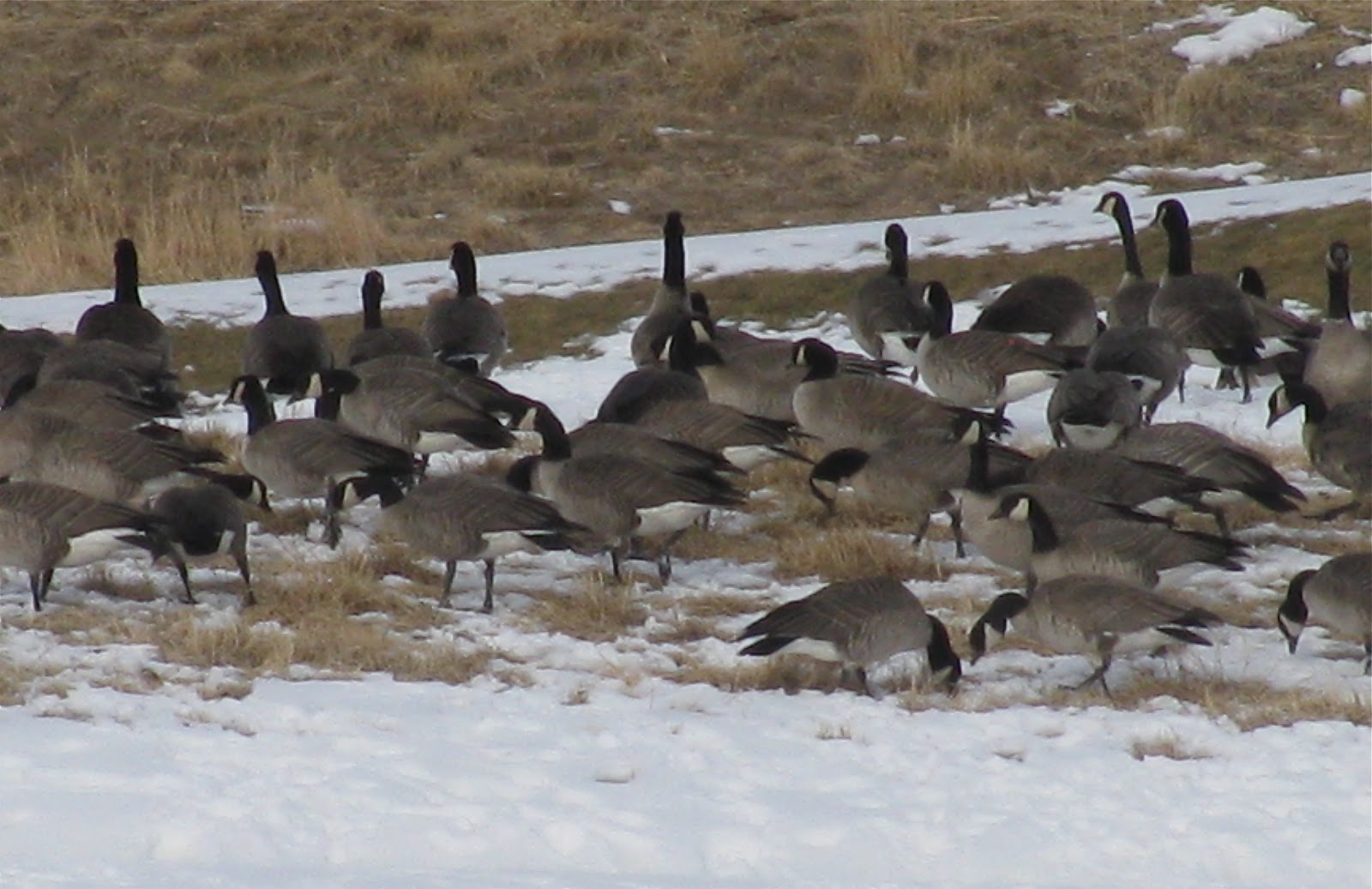 "The Canadians are taking over!" I agree. 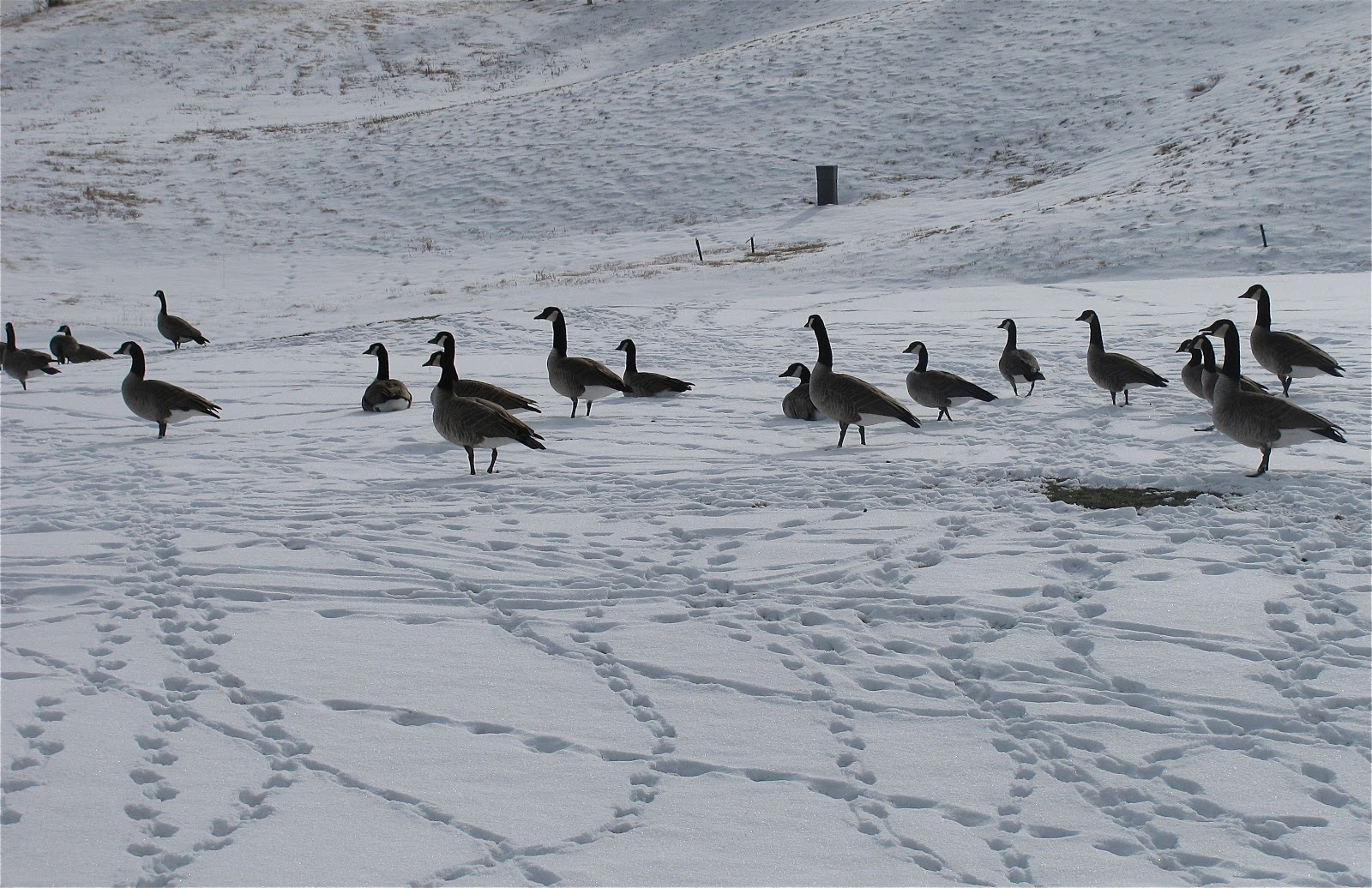 Strange marks explained!
Just a little piece of Canada outside my home! 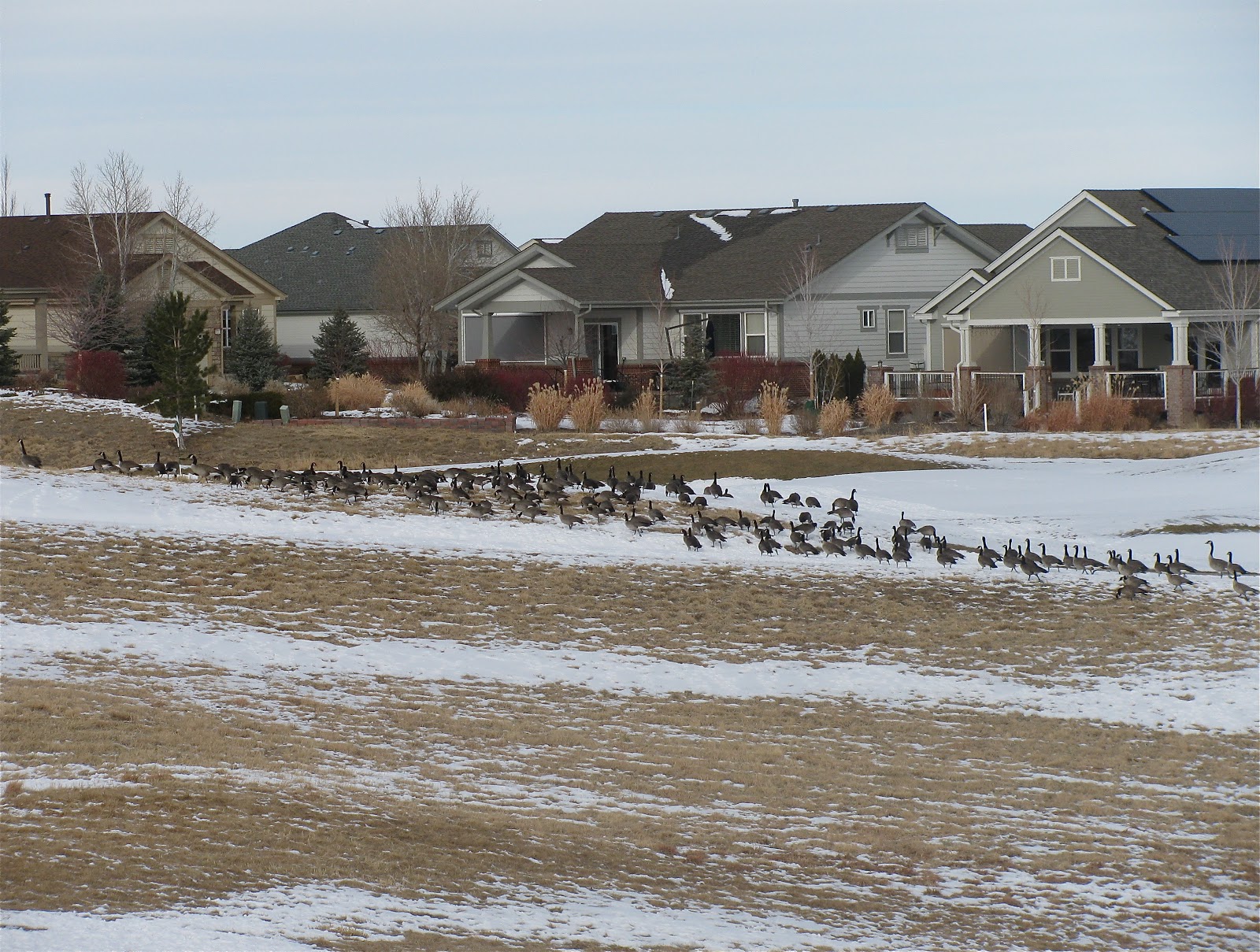 I googled on the sly when I got home.

Carl Linnaeus was the first to use the term 'Canada Goose' in his Systema Naturae in 1772.
James Audubon followed suit in 1836.
The name Canada originated in the Iroquoian word kanata which meant "village" or "settlement."
http://wiki.answers.com/Q/How_did_Canada_geese_get_their_name

There is some debate over whether or not the use of the name Canadian Goose should be discouraged.
http://en.wikipedia.org/wiki/Canada_Goose

But other sources accept it.
http://nationalzoo.si.edu/scbi/migratorybirds/featured_birds/default.cfm?bird=Canada_Goose

For me, they will always be Canadian Geese,
and one of the most indelible memories from my childhood is
watching in awe as great flocks of honking and cackling geese
migrated overhead in their sinuous V-shaped formations. 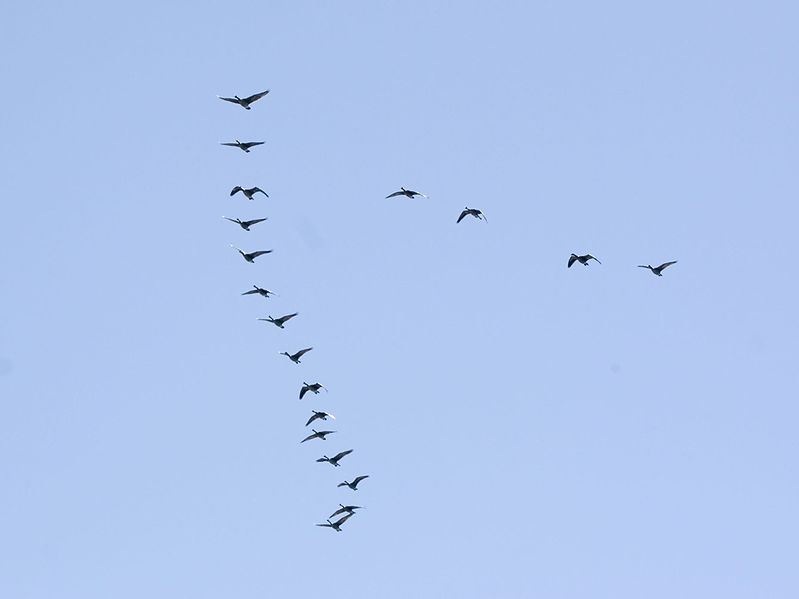