Sometimes a walk is pure serendipity!

Yesterday Terry and I took a quick walk along Piney Creek,
because we were in a hurry to catch the Bronco game. 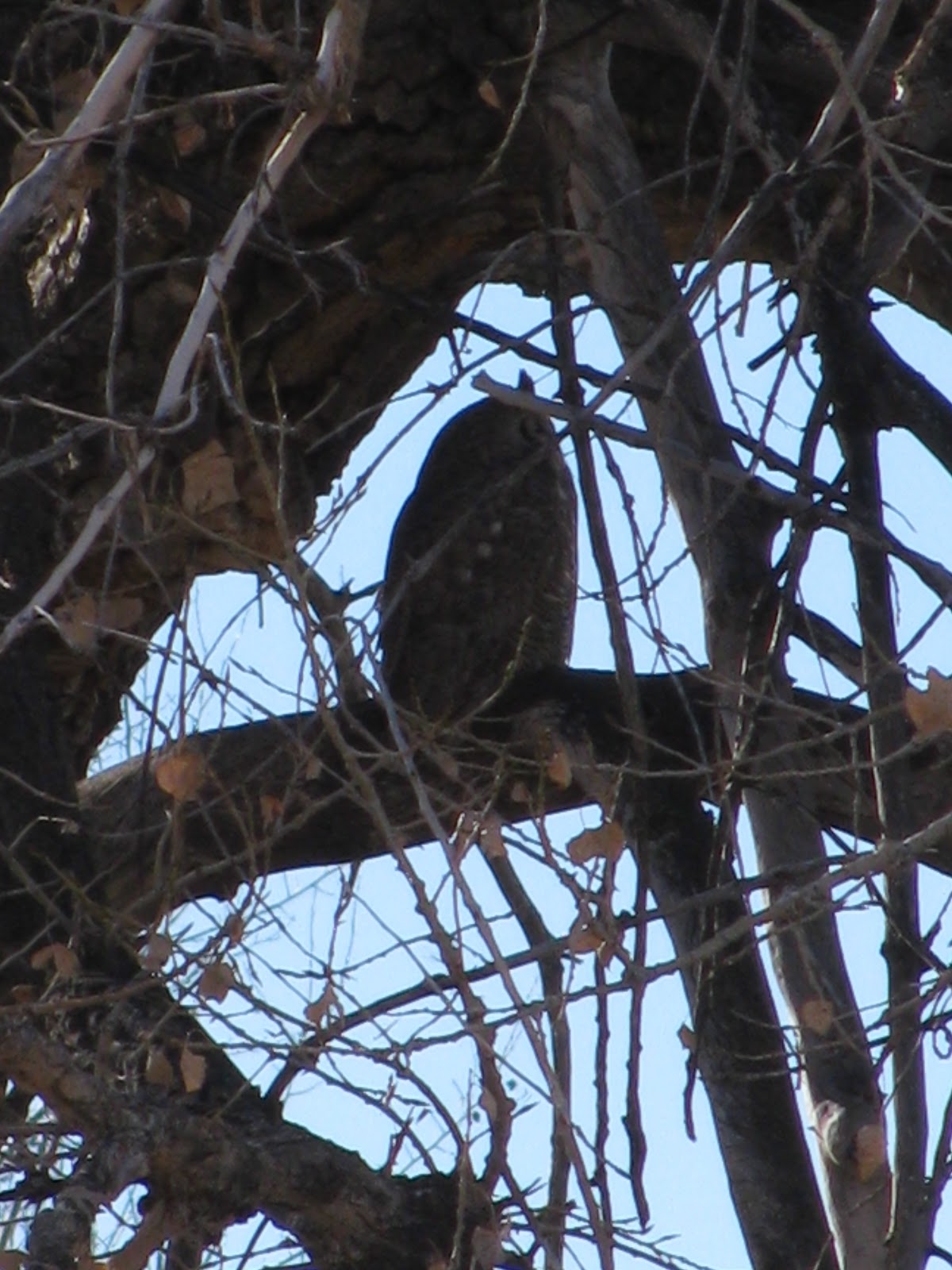 And wouldn't you know it!
At the 300 mile point of walking since I retired,
I spotted a silhouette in a cottonwood across the creek.

"Is that an owl?" I said to the ever-patient Terry.
"It can't be an owl!  I've only ever seen two in the park in daylight before."
And off I went with my camera, jumping the creek, and sneaking closer.
Sure enough!  An owl!  Serendipity!

The E-P never complained even though kickoff was approaching fast,
and we were more than a mile from home.

That dang cottonwood had so many branches, and the owl was lit from behind!
Every time I tried to zoom and focus, I would lose it.
It was watching me trying to get under its tree so I could get a better shot.
No such luck!
Off it flew on silent wings, chortling I'm sure!

"Was it a great horned owl? asked Terry.

"We'll see," said T.
This is his patient response to the hundred flights of fancy I have daily.

As soon as I got home, I transferred the few snaps I had to my computer,
with the not so patient E-P looking over my shoulder.
I played around with my iPhoto program,
and said, "I need Photoshop!"

And there it was! 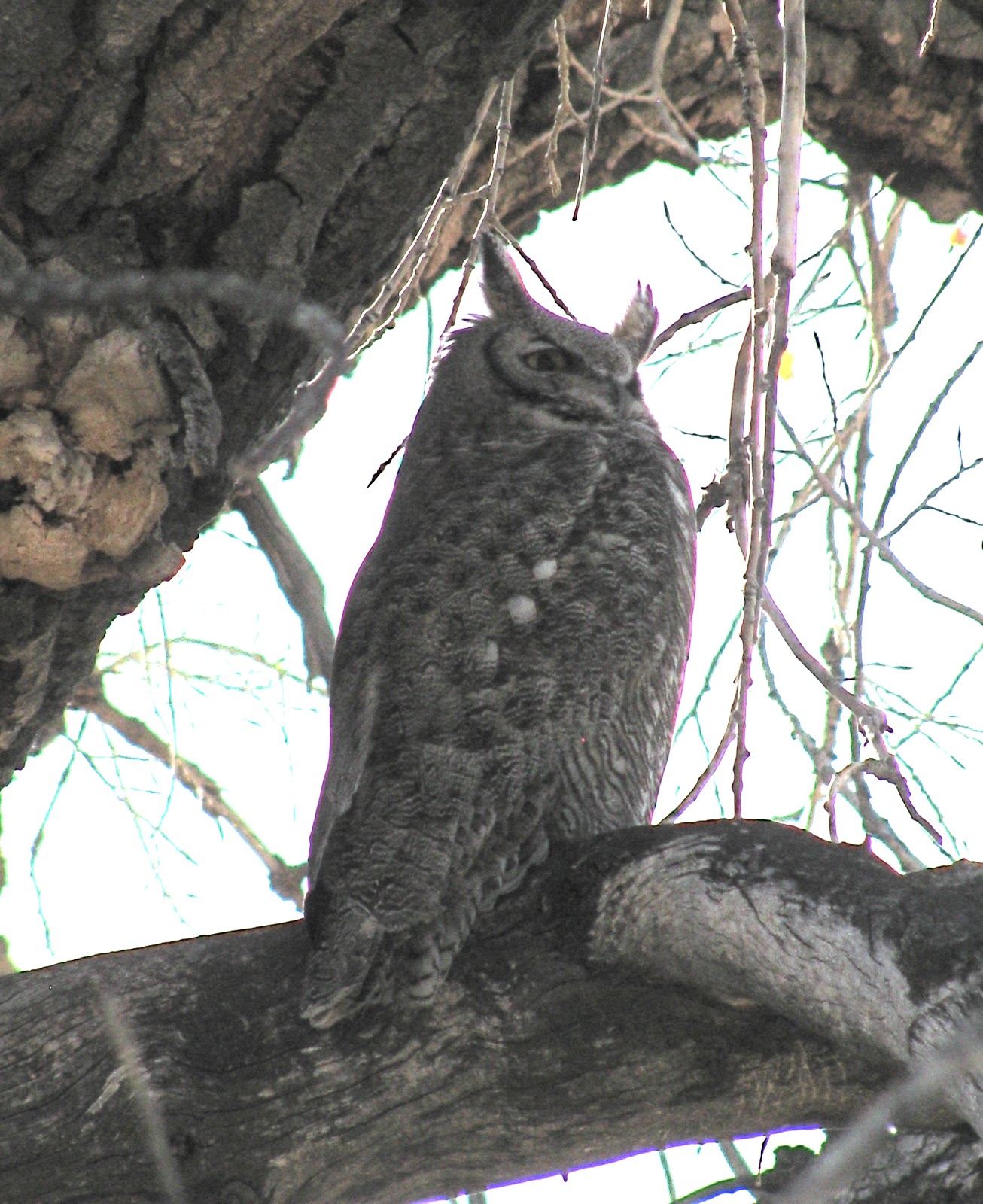 Wow!  I actually got something!

"If I had a camera that zoomed better and worked better in low light conditions,
I could go down to the park in the evening and get good owl pictures!"

"If I got a new camera,
like maybe that PowerShot SX50 HS,
I could bequeath you this one.
Then you could take your own pictures!"

"Okay, I could give you this one!"

Is it?  I'm madly paging through my two bird books.
Barrel shape?  Check!
Neckless?  Check!
Widely spaced ear tufts?  Check!
Yellow eyes?  Check!
Heavily and horizontally barred?  Check!
17 - 22 inches long?  Not so much.  Maybe 15.
What else can it be?

Great horned owls (Bubo virginianus) are nocturnal,
which means that they're usually out and about at night
hunting for a variety of small animals found in this area:
birds, snakes, mice, voles, rabbits, frogs, and skunks.
Yes, skunks!

These owls do not have a strong sense of smell,
so they hunt skunks,
which may explain the eau de skunk that has awakened me on summer nights.

They hunt from high perches,
swooping down on silent wings
to strike with their powerful and deadly talons.

Great horned owls are found everywhere in Colorado,
and they are the most widespread owls in North America.
They range from Alaska in the north to the Straits of Magellan in the south.

They nest early in the year, taking over nests made by other birds,
and laying one to six eggs in January or February.
The females incubate and brood, while the males hunt and provide food.
The baby owls hatch in four or five weeks and begin to fly in nine to ten weeks after hatching. 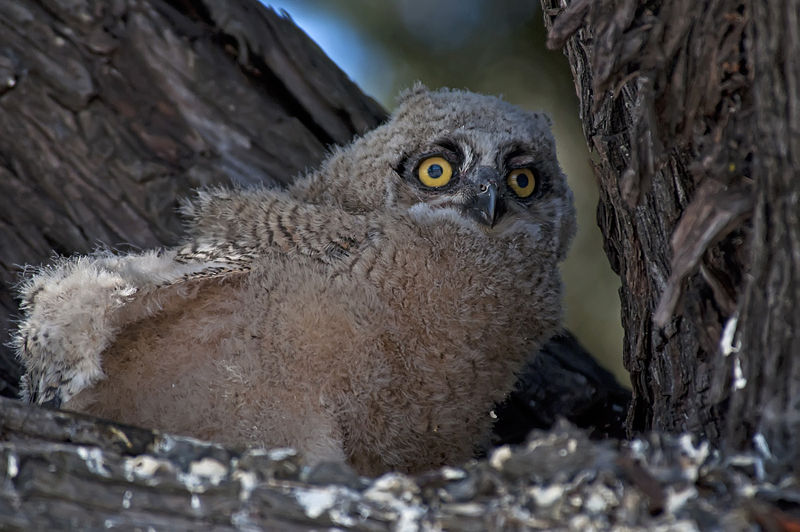 At about twelve weeks, the young owls begin to look after themselves;
but they remain dependent on their parents,
honing their hunting skills,
until the fall when they leave the home range of their parents.

Once you have heard the male's, Hoo, hoo-oo, hoo, hoo,"
or the female's "Hoo, hoo-hoo-hoo, hooo-oo, hoo-oo,"
you will never forget it.
Mated pairs can sometimes be heard hooting back and forth. 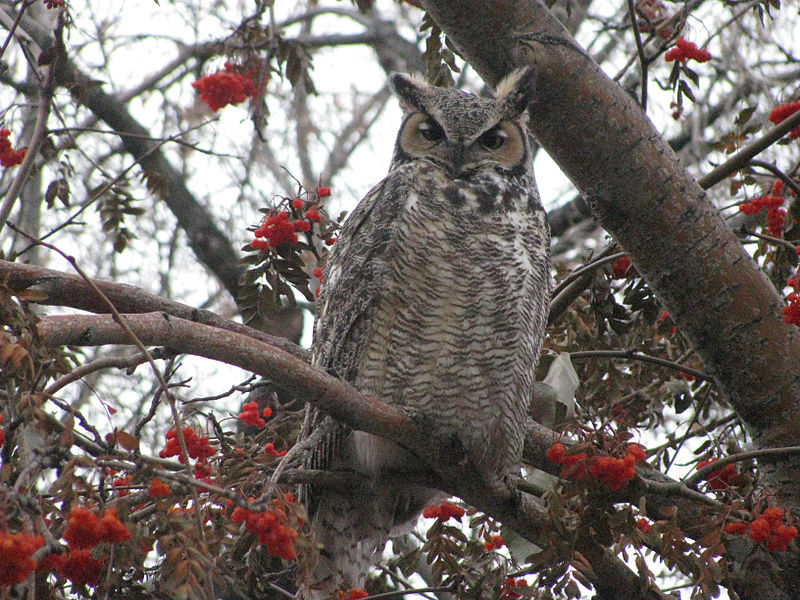 "If I had a new camera, I could take a picture of an owl like this one somebody took in Calgary!
Heck, I could go to Calgary and take one there!
Visit my sisters!"  I exclaimed.

If you were wondering, "E-P" means "ever-patient."
Terry is an ever-patient husband with mecurial moi!

1.  Owl Moon by Jane Yolen
This picture book is about a young girl going owling for the first time with her father on a winter night. They meet a great horned owl and some other nocturnal animals on their walk in the cold forest.
The book won the Caldecott Medal in 1988 for its beautiful illustrations.  Jane Yolen is an American author who has written over 200 books.

2.  Owls in the Family by Farley Mowatt
This children's novel is about three boys who find two great horned owls.  Billy adopts Weeps and Wols as family pets.   The story takes place in Saskatoon, Saskatchewan.  Farley Mowatt is a Canadian author known for his humor and love of wildlife.

Now this is serendipitous!  My fellow blogger Jim and I were chatting about owls and how we both read this book aloud many times to our students just a day or two before I saw the owl at the 300 mile mark on my walk to St. Anthony!  Sometimes the universe seems nonrandom!
Posted by Fundy Blue at 12:31 PM