The Hobbit Who Loved Dragons

J. R. R. Tolkien entered my life on a dreary winter day early in 1966.  I will never forget the moment, even if I don't remember the date.  I had been fighting bronchitis, strep throat, and a high fever for a number of days, and I was completely miserable.  My only comfort was a blue Sony transistor radio that was sitting on my stomach as I lay in bed. 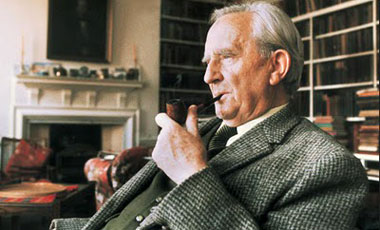 J. R. R. Tolkien
(Referenced this way because of length)

Radio CJFX, Antigonish, Nova Scotia:  At that time CJFX played country, pop, rock, and Celtic music, and I listened to it hour after hour, day after day.  I tuned in for rock; but, because of CJFX's variety format, I was forced to develop an appreciation for Jim Reeves, the Clancy Brothers, Eydie Gorme and Steve Lawrence - not to mention John Allan Cameron and Winston "Scotty" Fitzgerald.  However, the most important impact CJFX had on my life was introducing me to J. R. R. Tolkien.

That Saturday morning CJFX broadcast a program for teenagers that featured J. R. R. Tolkien and his book The Lord of the Rings.  I listened spellbound, and when I heard a passage from LOTR read aloud I was caught, for life: 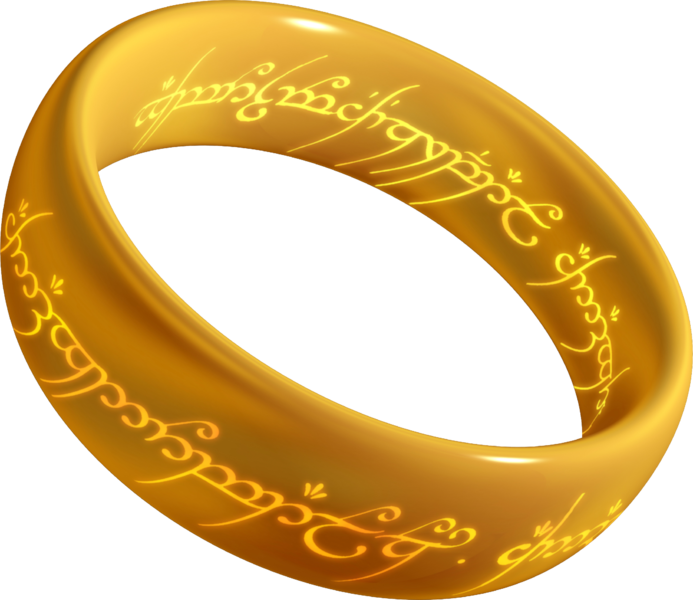 The Ring of Power
http://la.wikipedia.org/wiki/Fasciculus:Unico_Anello.png

Getting my hands on The Lord of the Rings in Stillwater, Nova Scotia, was not an easy thing.  The nearest store that might carry the books was 35 miles away, and I had little money.  It was a long wait until the end of the school year when I won a prize that covered the cost of the books and my mother had the time to drive me to Antigonish.

I read the trilogy nonstop for days, and then the hunt was on for The Hobbit.  I couldn't find it anywhere!  We moved over the summer to Freeport, Nova Scotia, and a new neighbor, who had a teen-aged son visiting down in the States, heard about my fruitless efforts to find The Hobbit.  The son returned home in the fall with the book for me in which he had inscribed, "May the hair on your toes grow ever longer!"  The story did not disappoint!
I have been reading and studying Tolkien ever since. 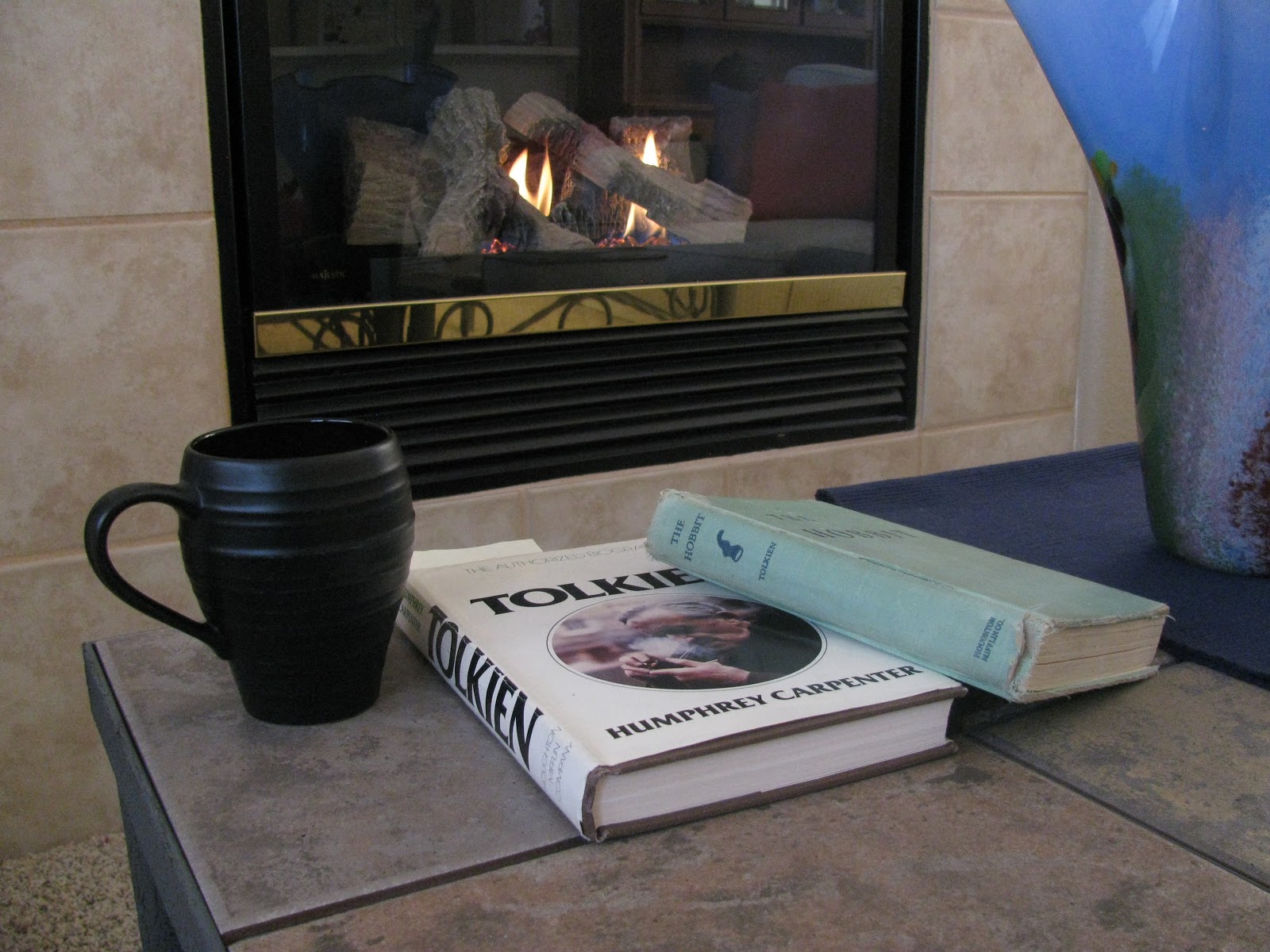 This weekend I know I will see Peter Jackson's movie The Hobbit: An Unexpected Journey.  It will impact my Hobbit forever, just as Jackson's The Lord of the Rings movies changed my LOTR forever.  So these past few days I have reread The Hobbit for the umpteenth time and Humphrey Carpenter's Tolkien for who knows how many times.  Just once more I wanted to journey with Bilbo and the dwarves from the Shire to The Lonely Mountain and back again with my visions of Middle-earth.

Carpenter, writing in his authorized biography of Tolkien, describes how Tolkien's imagination followed two different tracks during the 1920s and early 1930s.  On the one hand Tolkien was writing entertaining stories for children; and on the other, he was constructing his personal mythology that was eventually published posthumously in The Silmarillion.  The two tracks did not meet until one summer's day when Tolkien was marking exam papers.  Later in his life Tolkien could not remember the year this happened, but this is how he remembered the occasion:

"One of the candidates had mercifully left one of the pages with no writing on it (which is the best thing that can possibly happen to an examiner) and I wrote on it:  "In a hole in the ground there lived a hobbit."  Names always generate a story in my mind.  Eventually I thought I'd better find out what hobbits were like.  But that's only the beginning."
(Humphrey Carpenter, Tolkien, Houghton Mifflin Company, Boston, 1977, p. 172)

From a sentence written on a blank page in an exam paper almost eighty years ago came the books that have captivated millions and millions of readers and continue to do so today.

Tolkien went on to find out a whole lot about hobbits and much, much more about Middle-earth.  When I first read Tolkien's books and Carpenter's biography, it did not take me long to recognize that Tolkien was the quintessential hobbit.  He recognized this himself and once wrote, "I am in fact a hobbit." (Carpenter, p. 176)

It is fascinating to read about Tolkien's childhood and to speculate about what might have influenced his later writings.  Tolkien was born on January 3, 1892 in Bloemfontein, South Africa.  When he was three he traveled with his mother and brother Hilary to Birmingham, England, because South Africa's heat was impacting his health.  While they were in England, Tolkien's father Arthur, back in South Africa, had a severe hemorrhage while recovering from rheumatic fever and died.  Suddenly, Tolkien's mother Mabel was faced with raising Ronald and Hilary on her own and with very little money.  She finally found a place for them to rent in the hamlet of Sarehole on the southern edge of Birmingham.  The hamlet, the Sarehole Mill, and the surrounding English countryside were transformed by Tolkien's imagination into the village of Hobbiton in his writing decades later.  (Carpenter, p. 176) 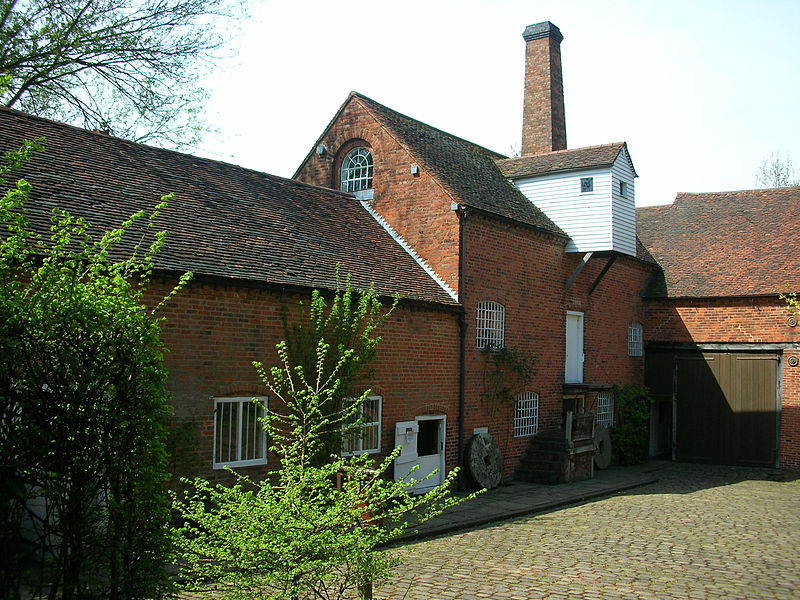 Mabel Tolkien began to teach her sons, and Ronald could read at four and write not long after.  Very quickly he demonstrated an interest in languages and drawing.  He loved to read, and his mother provided him with many books.  Ronald particularly liked The Red Fairy Book with tales collected by Andrew Lang because it contained "The Story of Sigurd." Sigurd is a hero from Norse Mythology known for slaying the dragon Fafnir.  From a this very early age, Tolkien desired dragons.  (Carpenter, p. 22). 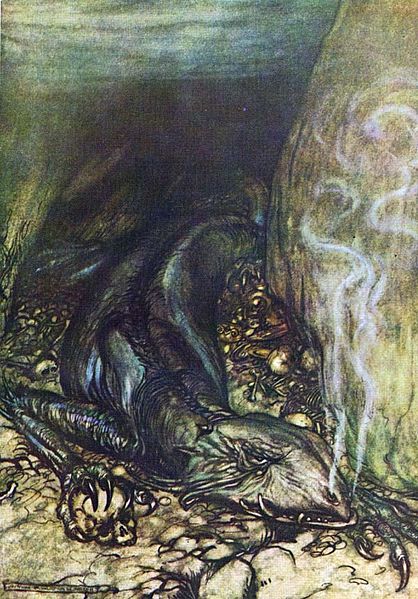 Around the time he was seven, Tolkien wrote a story about a dragon.  Humphrey Carpenter quoted Tolkien's recollection of his early story:

"I remember nothing about it except a philological fact.  My mother said nothing about the dragon, but pointed out that one could not say a green great dragon", but had to say "a great green dragon".  I wondered why, and still do.  The fact that I remember this is possibly significant, as I do not think I ever tried to write a story again for many years and was taken up with language." (Carpenter, p. 23)

From these humble beginnings in his childhood, John Roland Reuel Tolkien went on to become a world-renowned philologist, artist, and writer of high fantasy:  a hobbit who loved dragons. 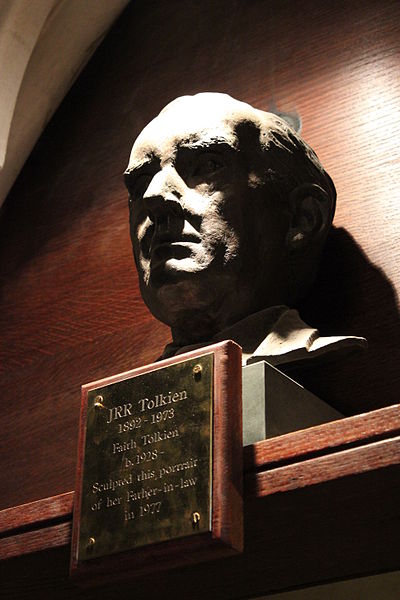 I hope Peter Jackson's Hobbit movie is every bit as good as The Lord of the Rings movies.
I'll let you know what I think very soon!