Last weekend I visited
historic Black Hawk and Central City;
it's one of the many things I love to do in Colorado.

Our friends John and Cindy flew in from California,
and we headed up Clear Creek Canyon
to the Ameristar in Black Hawk. 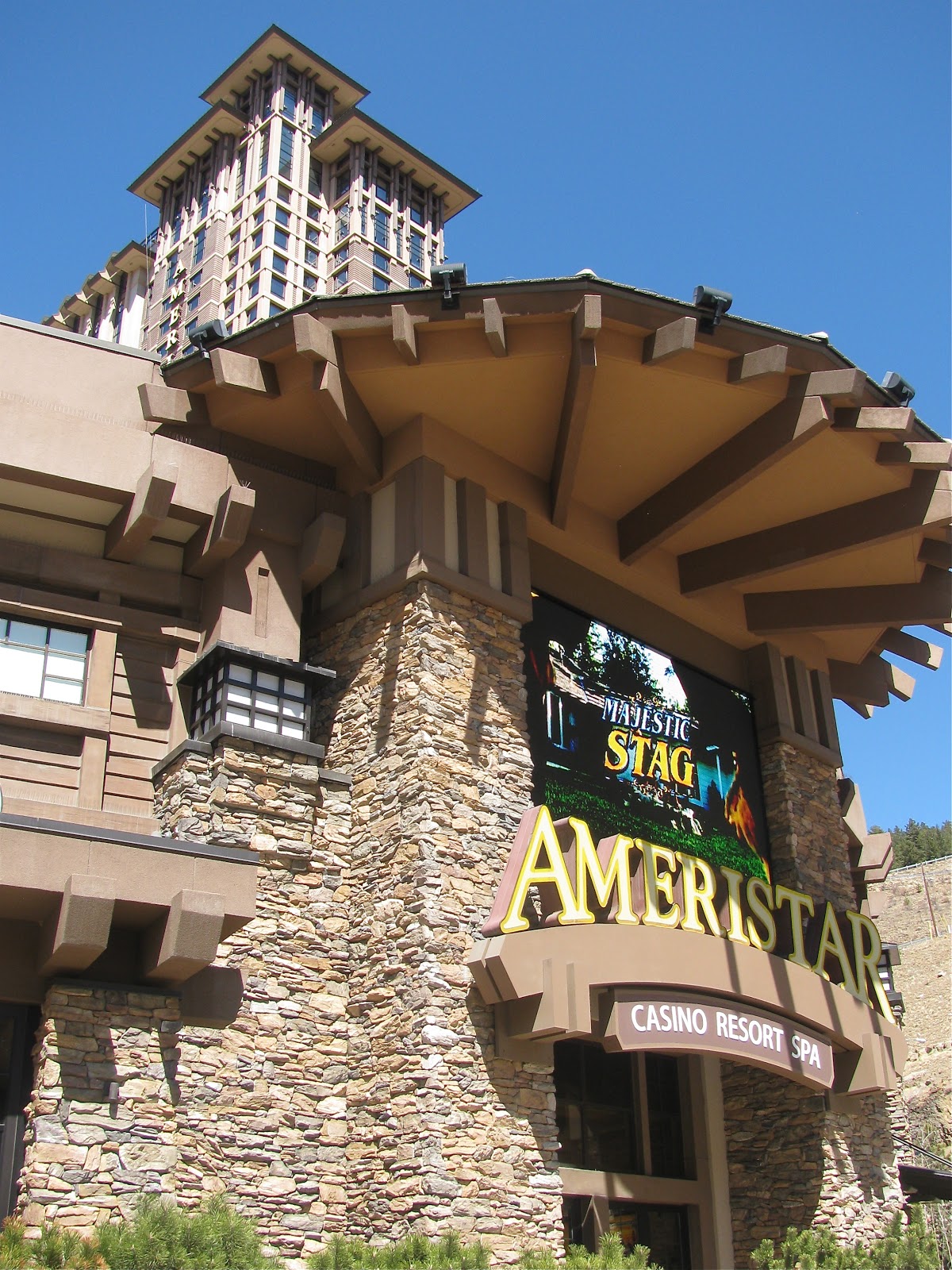 Before long, we were off to see the sights!
The guys quickly tired of accompanying
two photo-snapping history buffs
and stopped at the Bonanza to play blackjack. 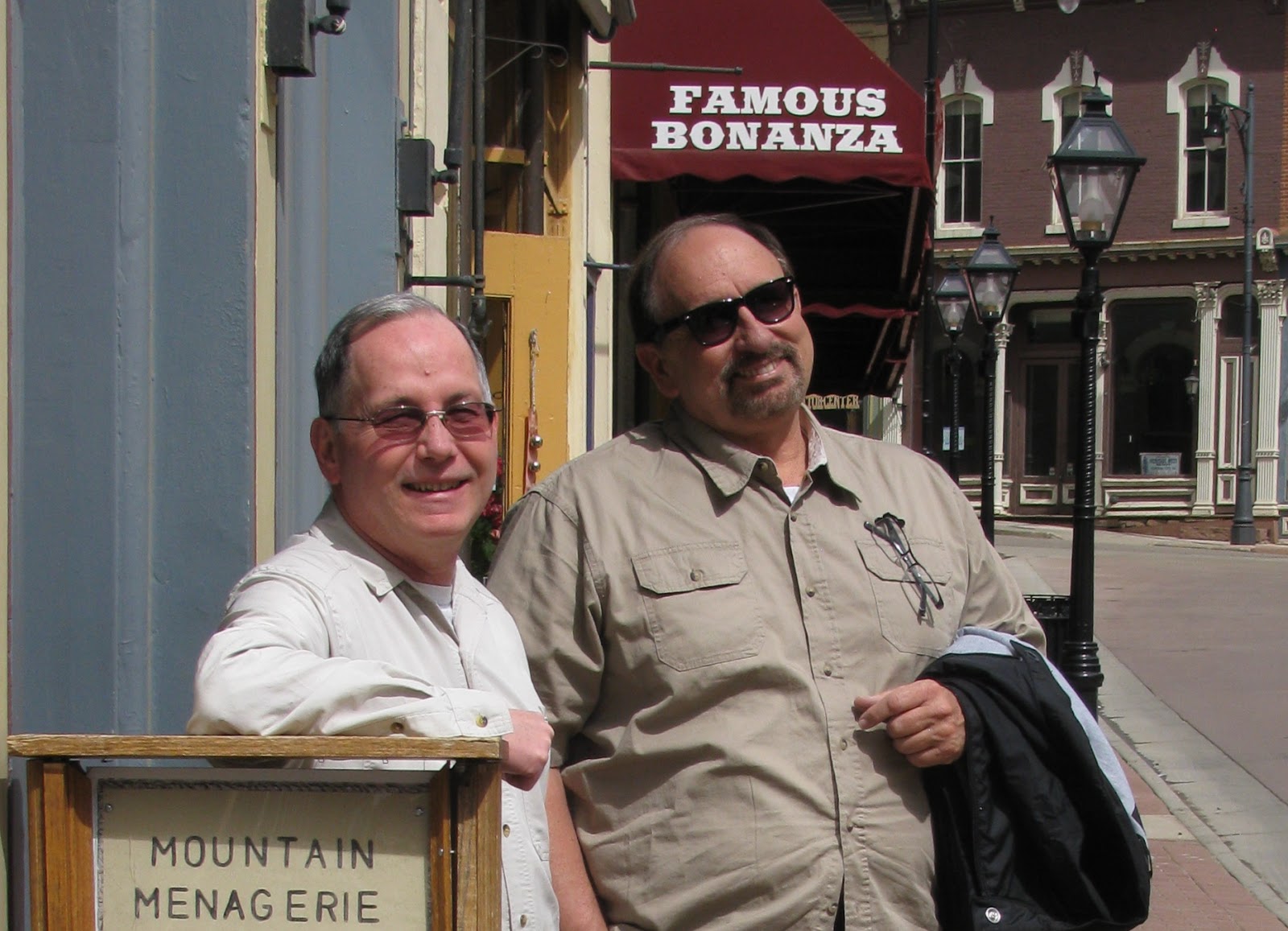 So Cindy and I fast-tracked it to Eureka Street
to explore some famous landmarks,
after giving the guys some unheeded advice: 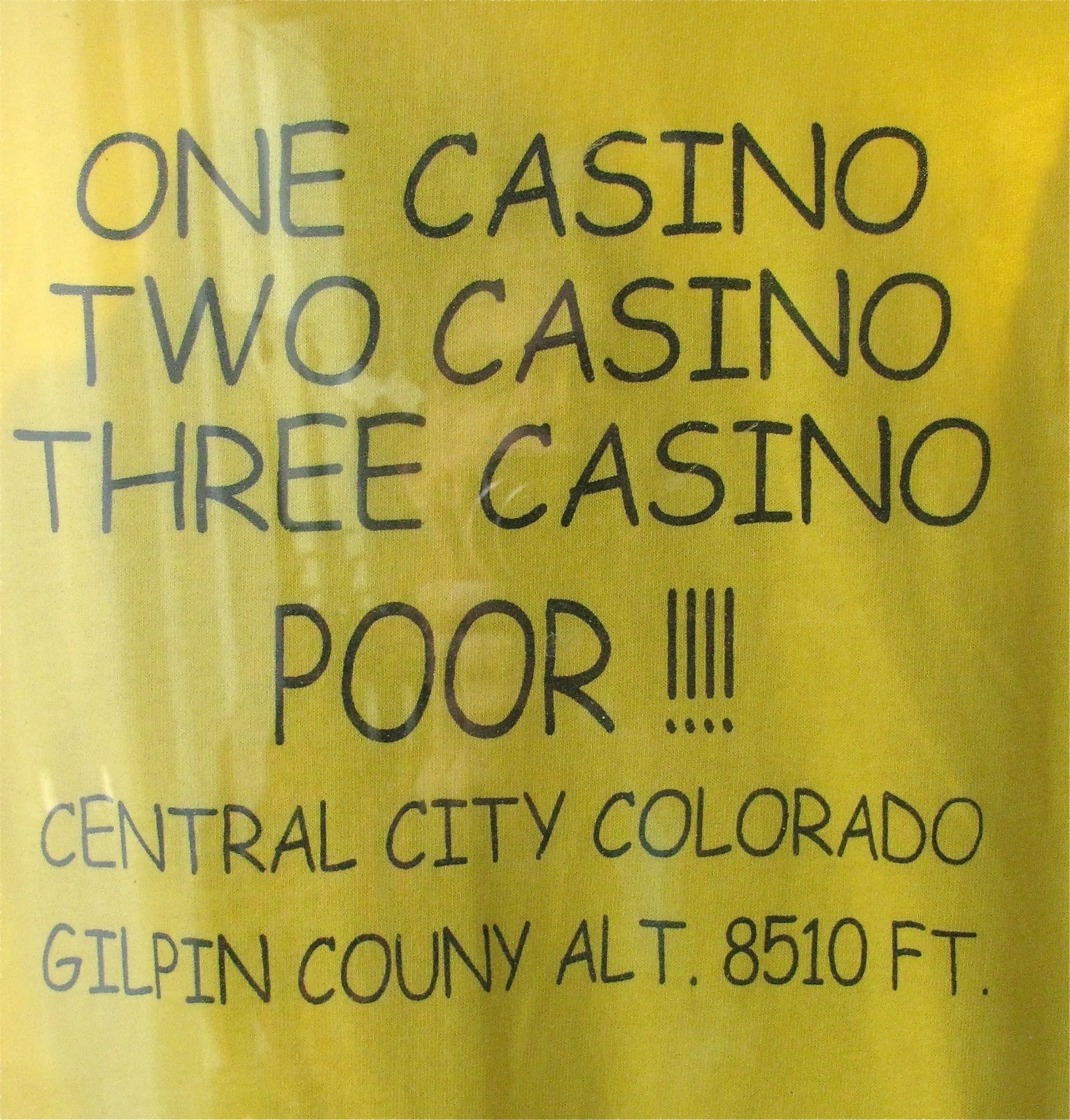 To walk along Eureka Street

in Central City, Colorado
is to travel back in time
more than one hundred years. 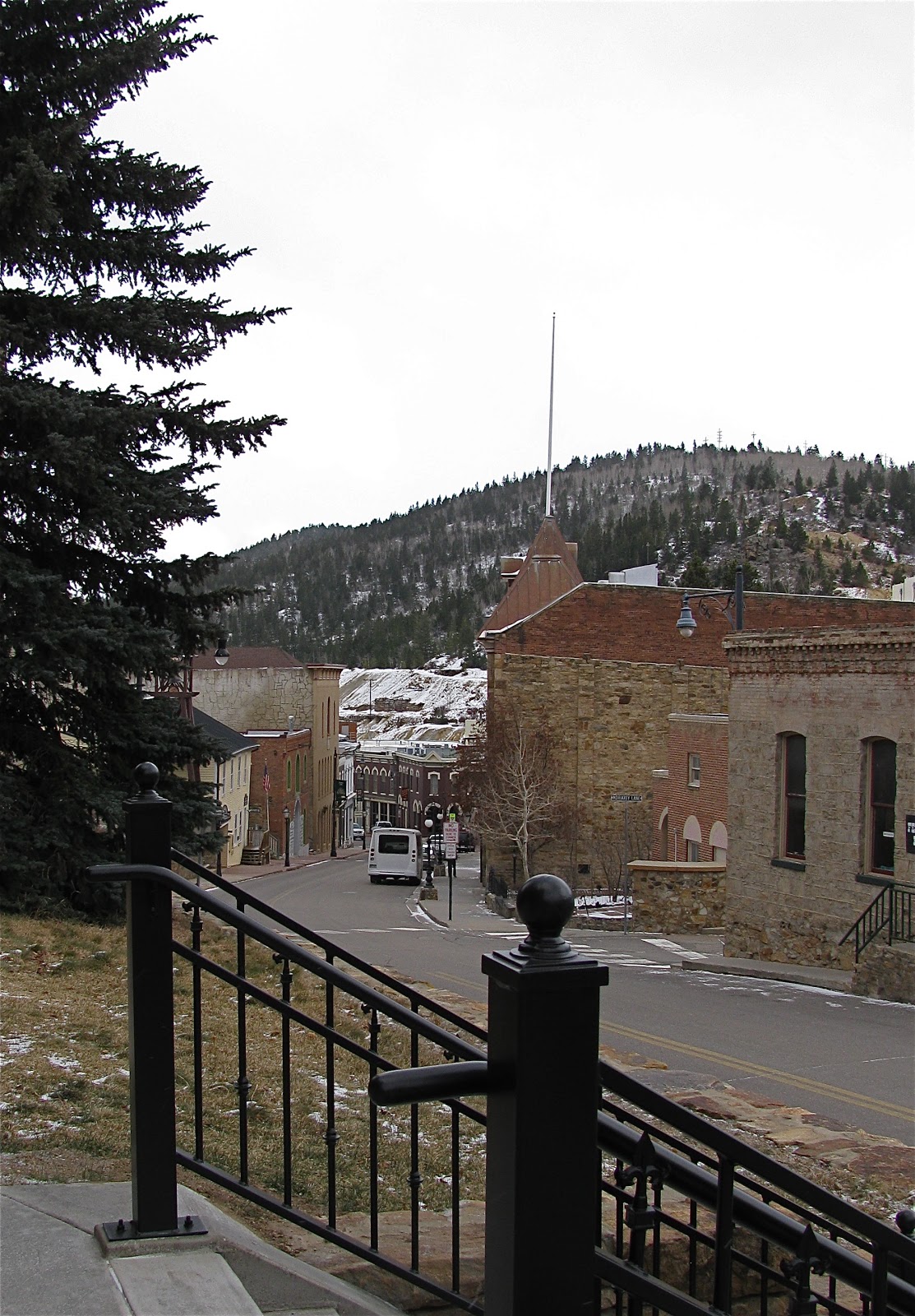 Eureka Street from the Steps of the
Old Gilpin County Courthouse

All the buildings that lined Eureka Street,
between the old courthouse and Main Street
on the morning of May 21, 1874
are still standing,
except one ~
the white wood Presbyterian Church.
It, along with much of downtown Central City,
was destroyed during the disastrous fire
that started in the Chinese quarters
mid-morning on the 21st.

As Cindy and I walked along
this stretch of Eureka Street,
it was easy to imagine the wild and heady days
of the Pikes Peak Gold Rush. 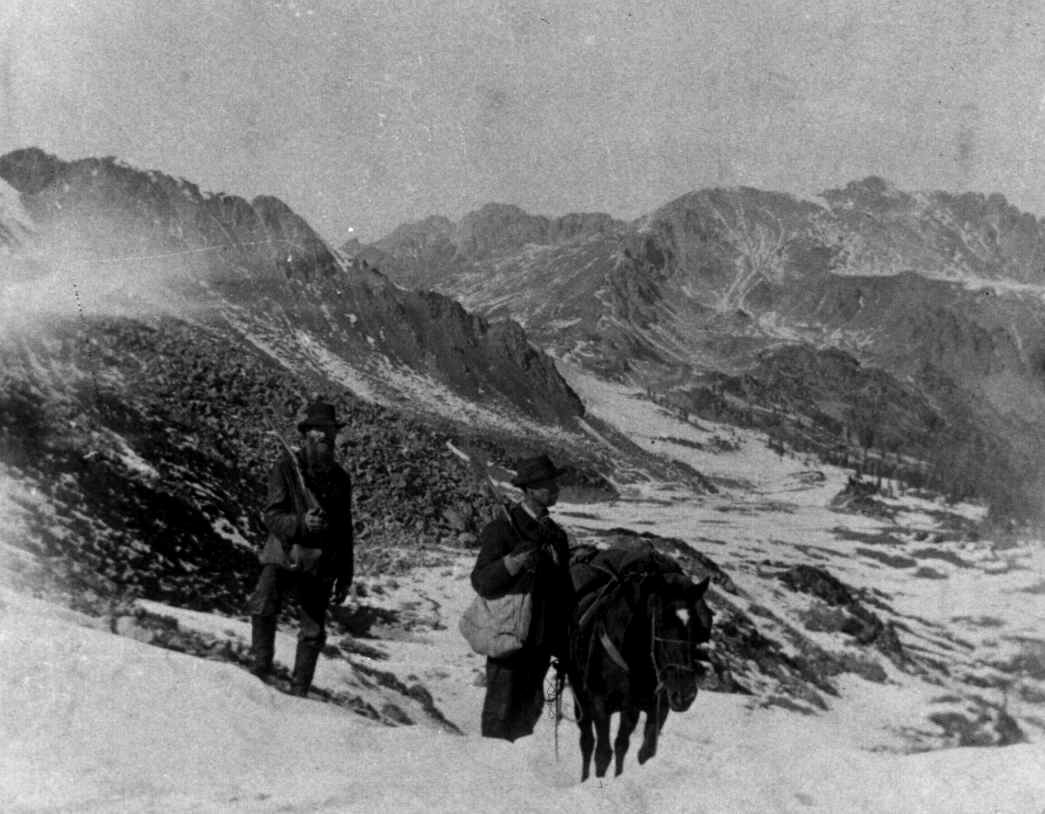 The gold rush began in July 1858
when Colorado was part of
the Kansas Territory
and lasted until Colorado
became the Territory of Colorado in February 1861.

Colorado in Western Kansas Territory
(to left of line passing through a in Kansas and dividing 1854)
http://commons.wikimedia.org/wiki/File:Kansasterritory.PNG


Early in July 1858,
William Greeneberry Russell
found the first significant gold in Colorado:
a small placer deposit
near the mouth of Little Dry Creek
in present-day Englewood,
a suburb of Denver.

Russell's find was quickly followed
on May 6, 1859,
by John H. Gregory's rich discovery
of the first Colorado vein or "lode" gold
in Gregory's Gulch
between the future
Black Hawk and Central City.

Some 100,000 people poured into this region
desperately seeking gold;
a fortunate few struck riches,
especially in and around the Gregory Lode,
an area which later became known as
the Richest Square Mile on Earth. 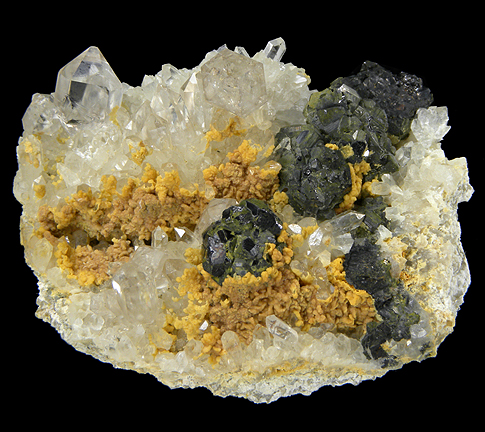 The story of the gold rush frenzy
is written in the mine dumps
scarring the hills surrounding the two mining towns. 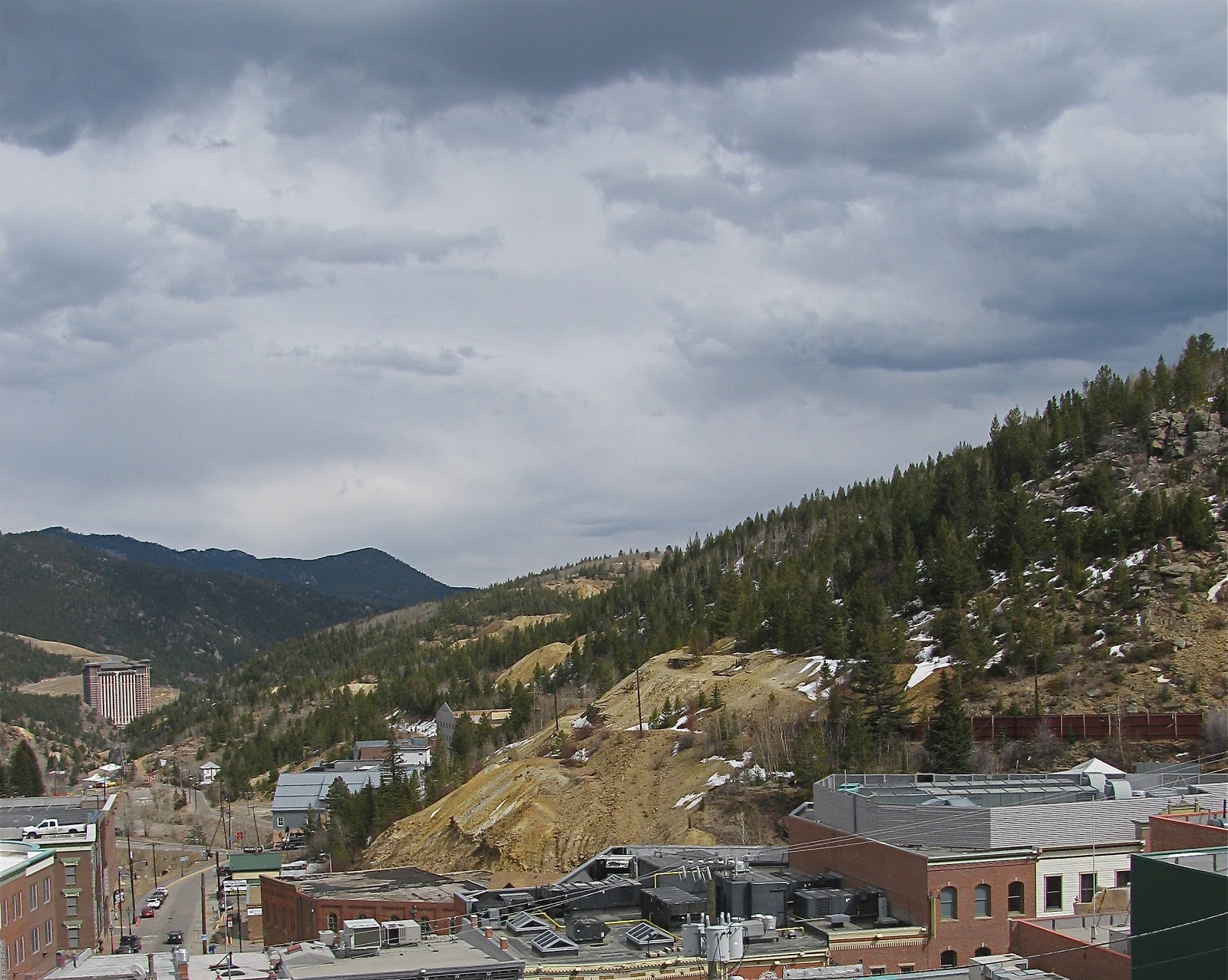 Mine Dumps on the Hills
Between Central City and Black Hawk


Before long Cindy and I were standing in front
of a prominent landmark on Eureka Street,
the old Gilpin County Courthouse
which now functions as the
Gilpin County Administrative Center. 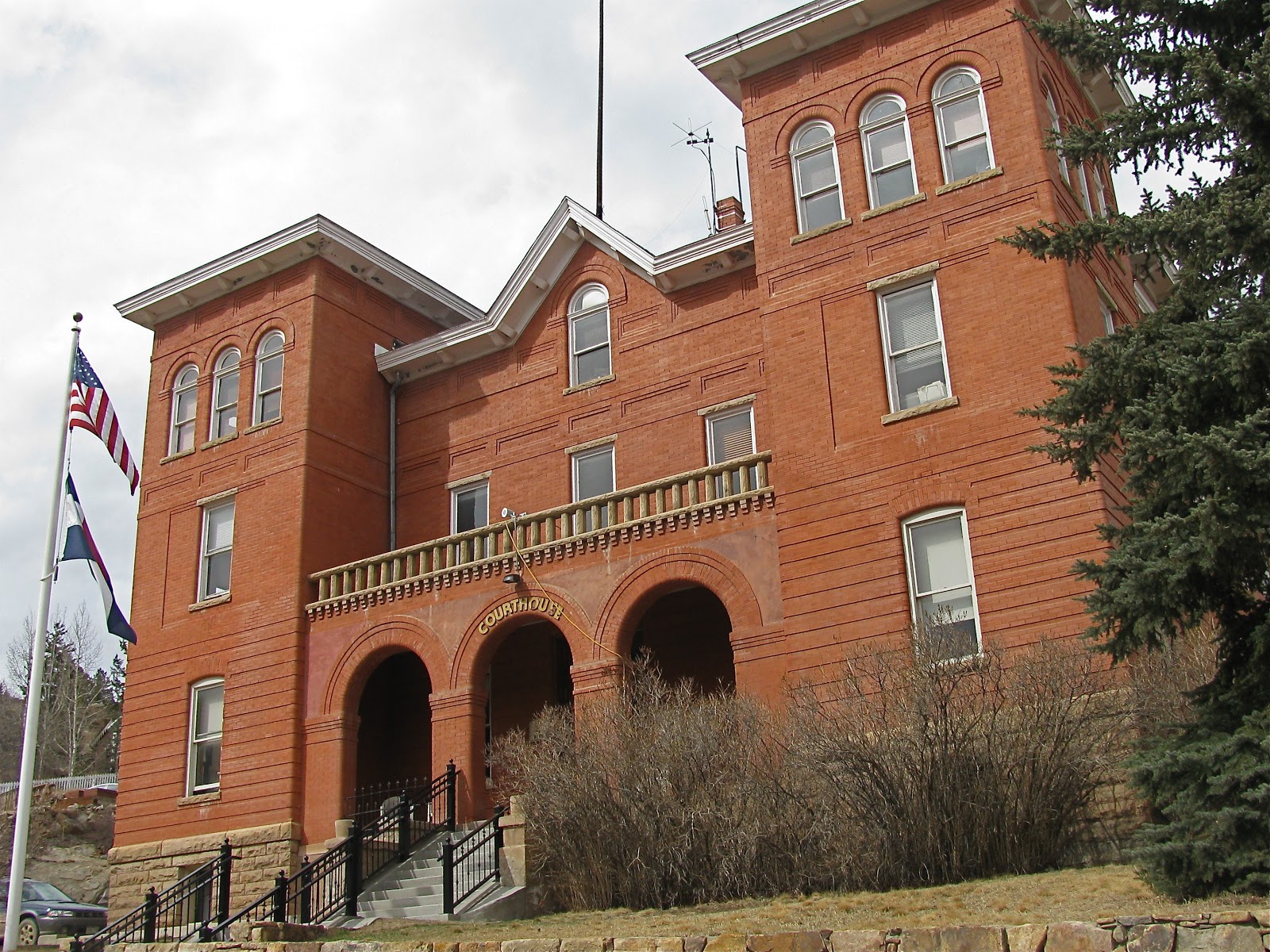 Lamont & Ballard built the courthouse in 1900
from a Baerrenson Brothers' design
out of Fort Collins stone and yellow brick
for the princely sum of $30,000.
It is a beautiful example of Italianate architectural style
with its arched, triple entrance
topped by a balcony and center gable
and its symmetrical square corner towers
and three-story wings.

Source:
Up in the Gulch:  A Walking Tour Guide of Black Hawk, Central City, and Nevadaville,
by Cathleen Norman and Linda Jones,
Preservation Publishing for the Gilpin County Historical Society, Lakewood, 2005.

Outside the courthouse
Cindy and I received a wacky offer we couldn't refuse!

"Would you like to see the jail cells in the basement?"
asked a young male employee.

Would we?  Are you kidding!

Down we went into the dimly lit basement,
as Sean/Shawn/Shaun regaled us
with stories of ghosts and poltergeists
who haunt the courthouse basement
and shuffle chairs in the upstairs courtroom.
Many of the former cells have been removed
to provide storage room,
but enough remains to get a feel for
what it must have been like
to be locked away in a basement cell. 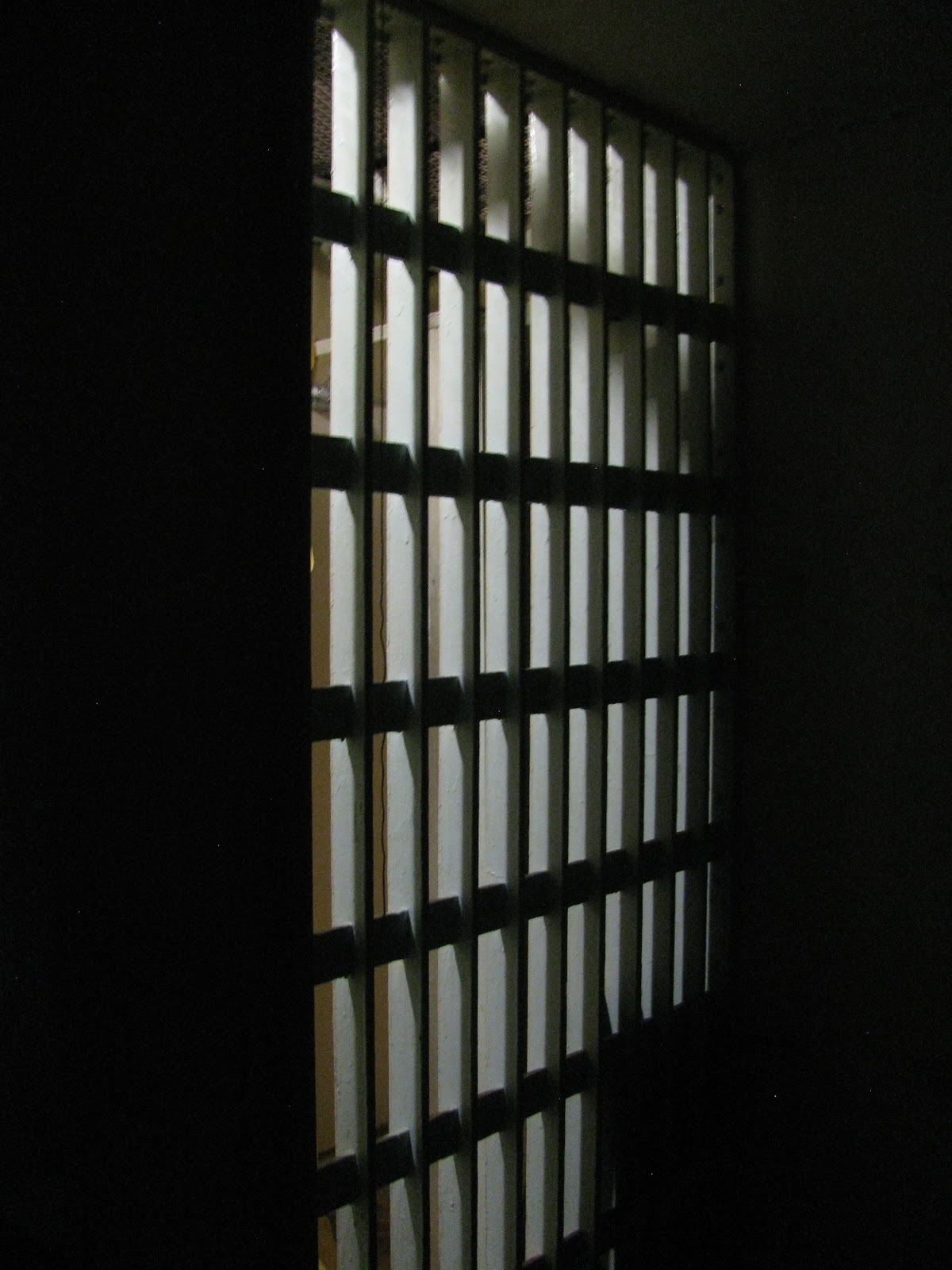 Inside the Gilpin County Courthouse Jail 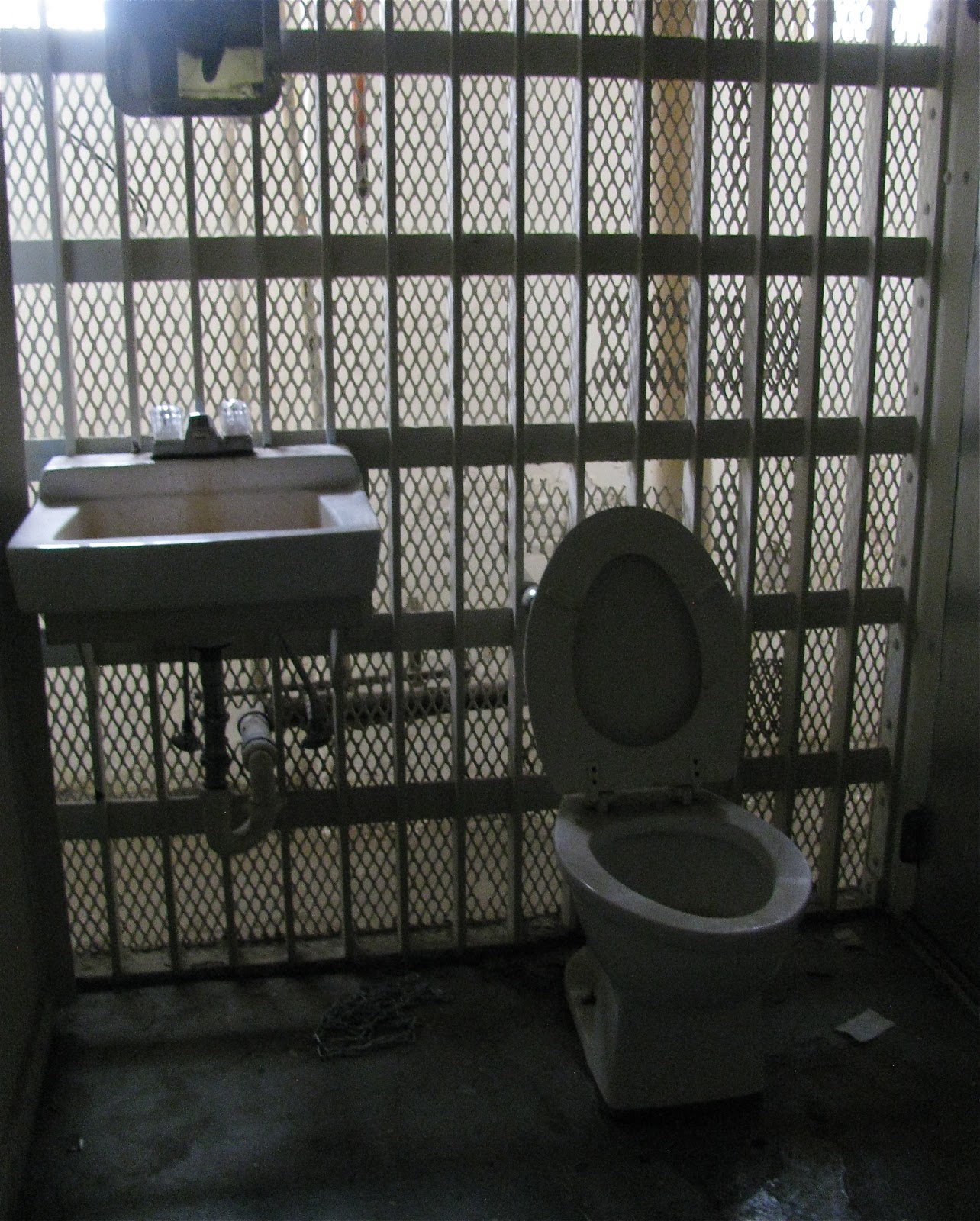 Afterwards Sean/Shawn/Shaun
showed us the old courtroom upstairs.
In it hangs a beautifully restored Centennial Flag.
This flag has 38 stars,
and it was America's national flag
from 1877 to 1890.
Each star represents a state in the USA at that time.
The thirty-eighth star stands for Colorado
which became a state on August 1, 1876.
Presidents Hayes, Garfield, Arthur, Cleveland, and Harrison
served under this 38-star flag.
http://www.usflag.org/the.38.star.flag.html 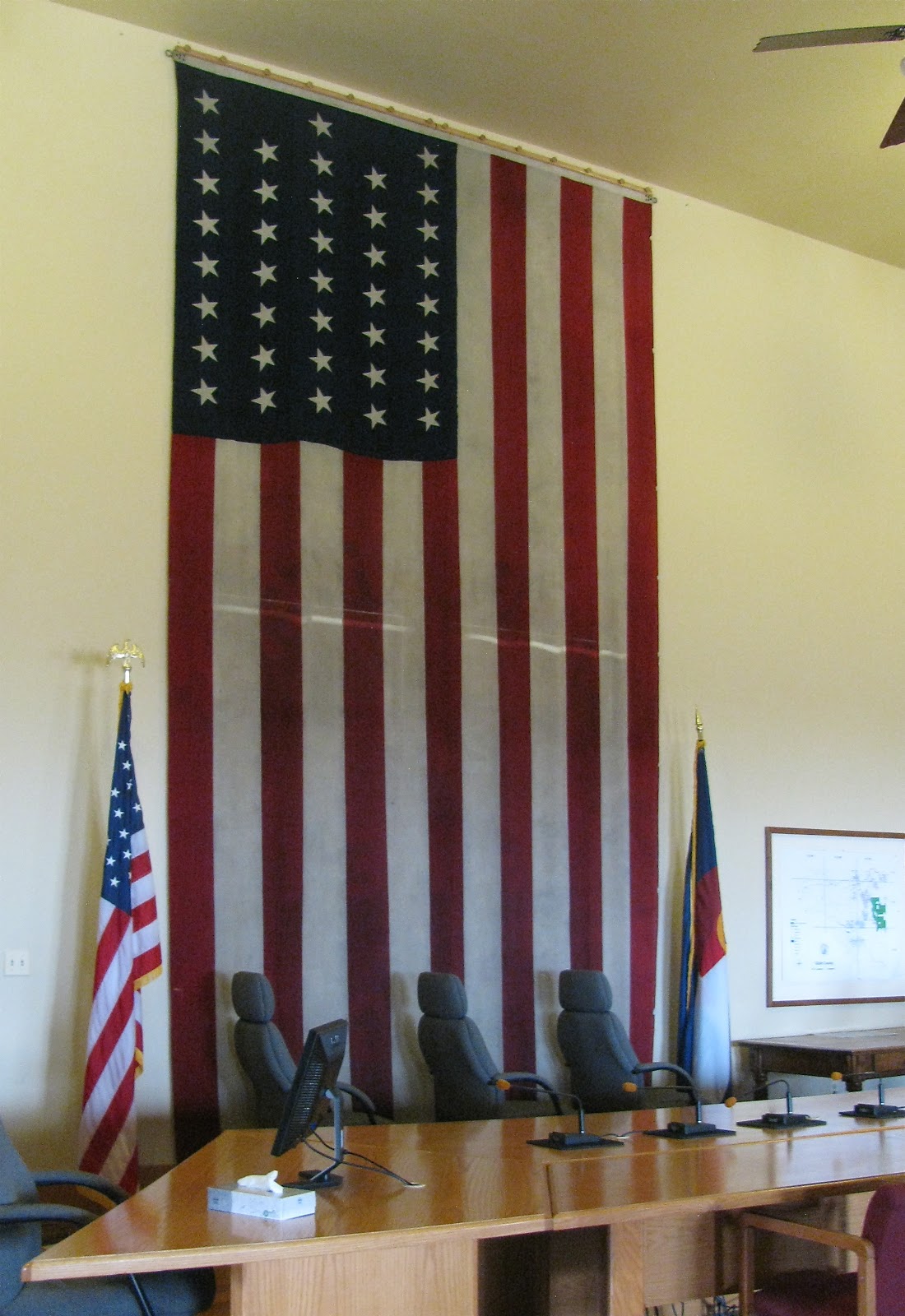 After Sean/Shawn/Shaun returned to work,
Cindy and I went outside to see my favorite artifact
in the Central City/Black Hawk Historic District,
the wonderful little burro
that stands outside the old courthouse. 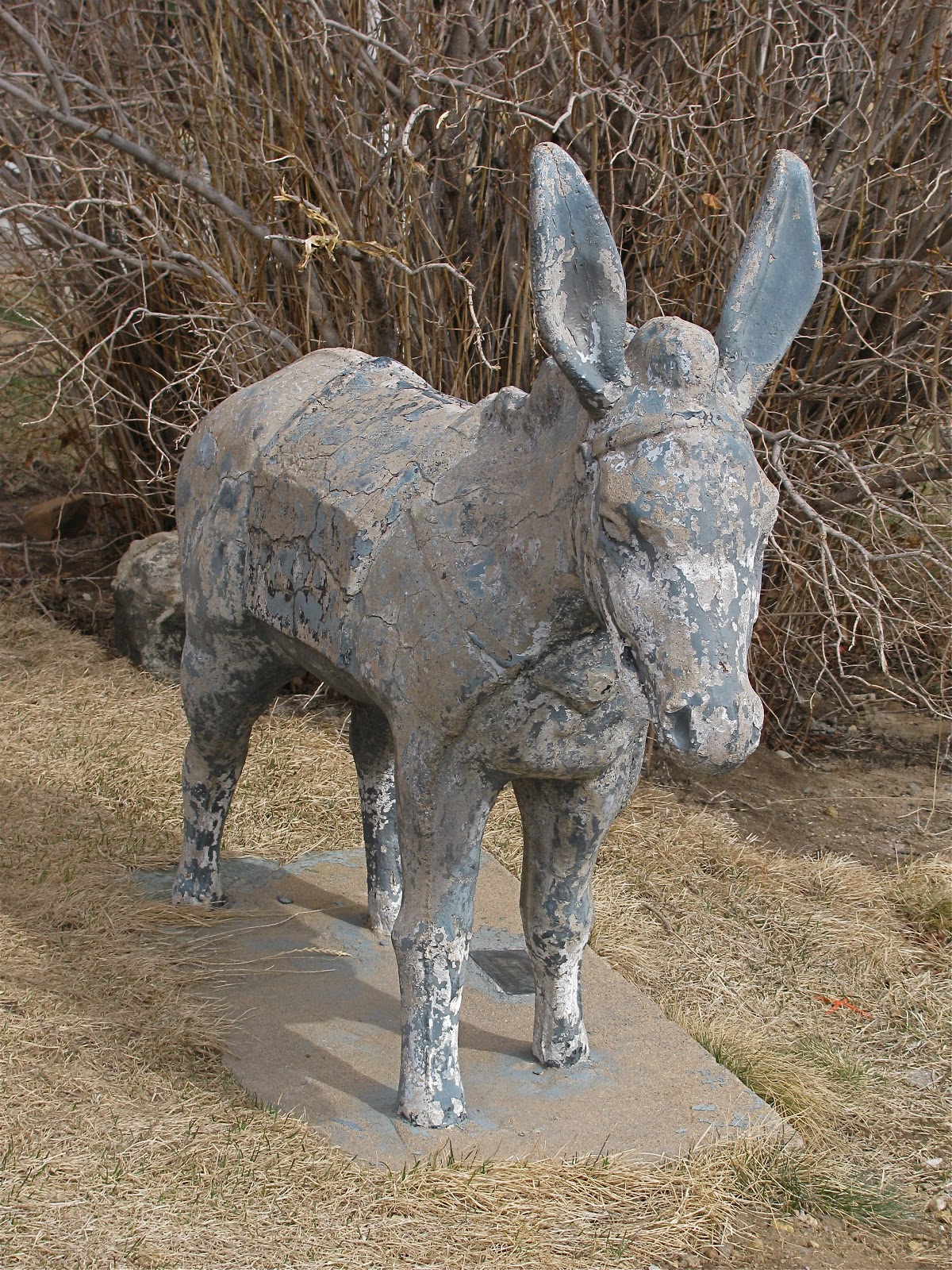 This little burro represents the many burros
who worked in the mines of Black Hawk and Central City.
Sturdy, sure-footed, and trustworthy
this small beast of burden
has a unique place in the history of Colorado.
Burros accompanied prospectors and carried their supplies
throughout the Colorado mountains,
hauled in building materials for mining camps,
pulled ore wagons in the mines,
and packed ore along treacherous trails.

One day
I will know the little burro's full history.

This day,
Cindy and I learned another piece of its story
when we chanced to talk with Tom Miller,
proprietor of Bevie Sue's Emporium
and long time resident of Central City.
Tom told us that there were
many stories about the courthouse burro,
but his went way back and was the true one.

There were a pair of burros named Jack and Jennie
who hauled ore on Chain O Mines properties
in and around Central City.
One day, when Jack was working
in one of the company's mines,
a miner accidentally placed
a stick of dynamite with a blasting cap
in the little burro's ore wagon.
As Jack was pulling the ore wagon,
it hit a bump and the cap detonated.

Part of me wishes I hadn't learned that. 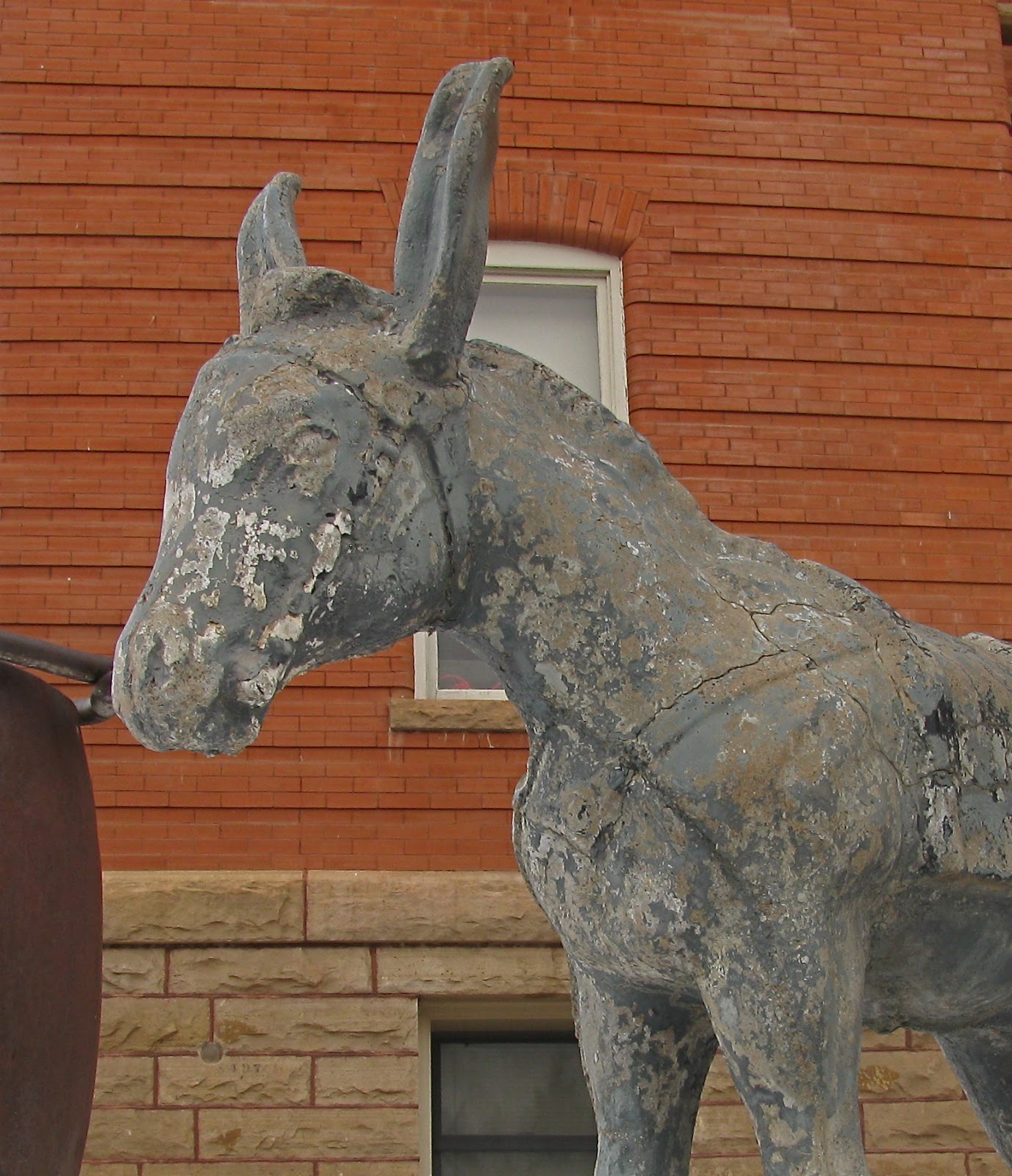