Yesterday I was delighted to open my garage door
and find hungry neighbors gathered outside.
I had been missing them during our thankfully-departed cold snap. 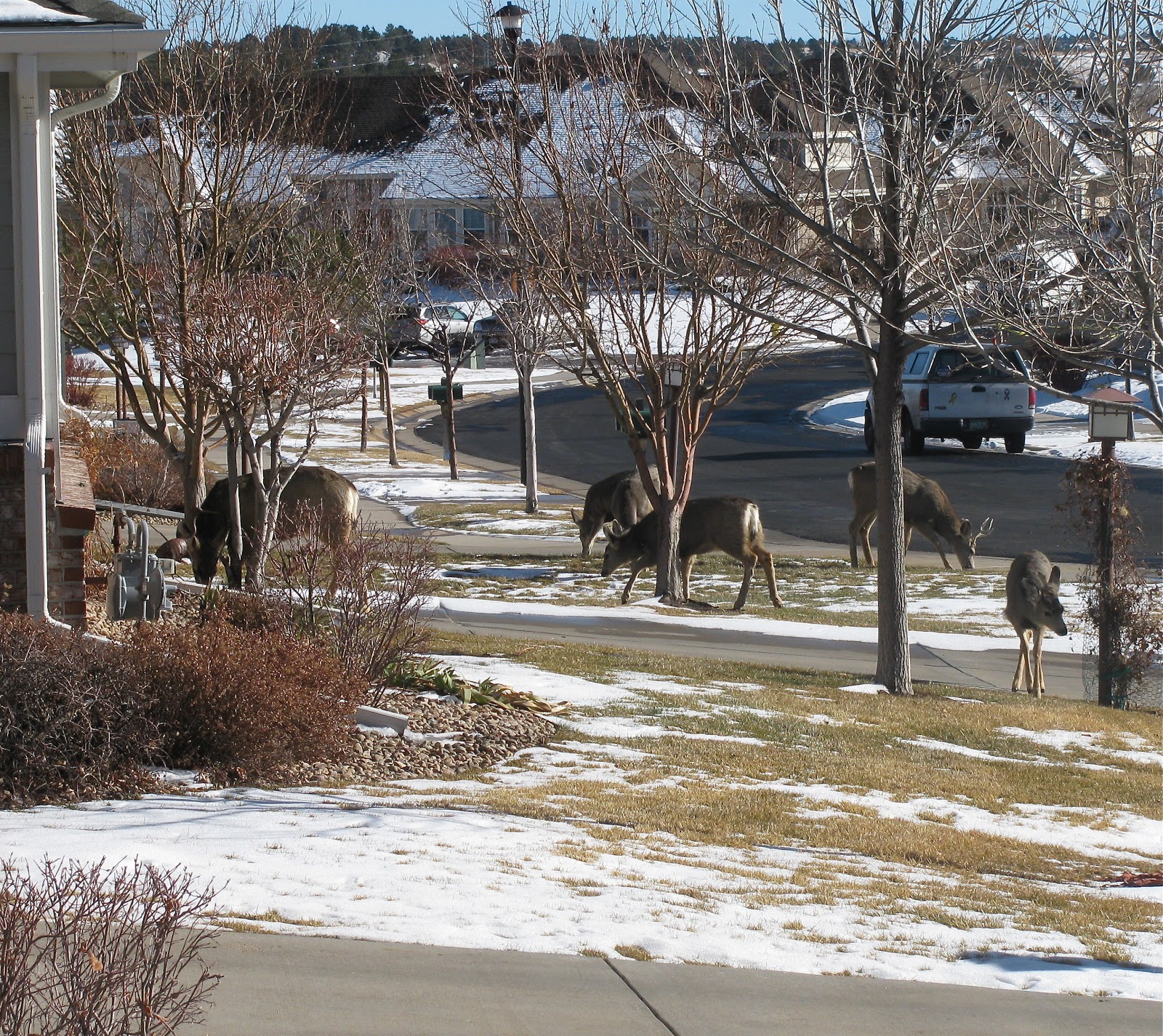 My neighbors are mule deer (Odocoileus hemionus).
They are named for their spectacular ears. 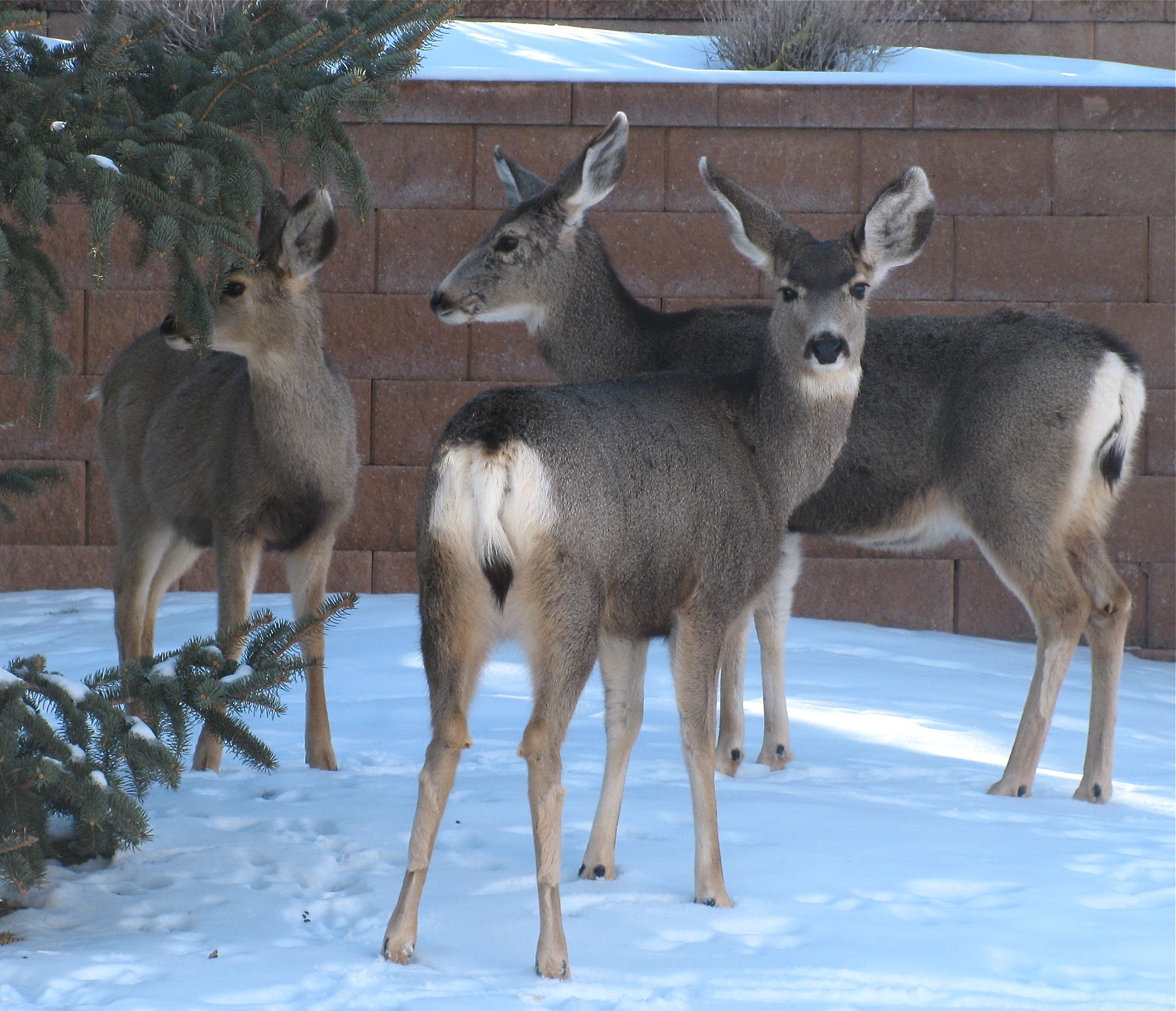 I don't mind sharing some grass, bushes, or spruce needles
with my four-footed neighbors
from the nearby Ponderosa Preserve;
but, if they start eating the wood on my house,
I'll have to scare them off. 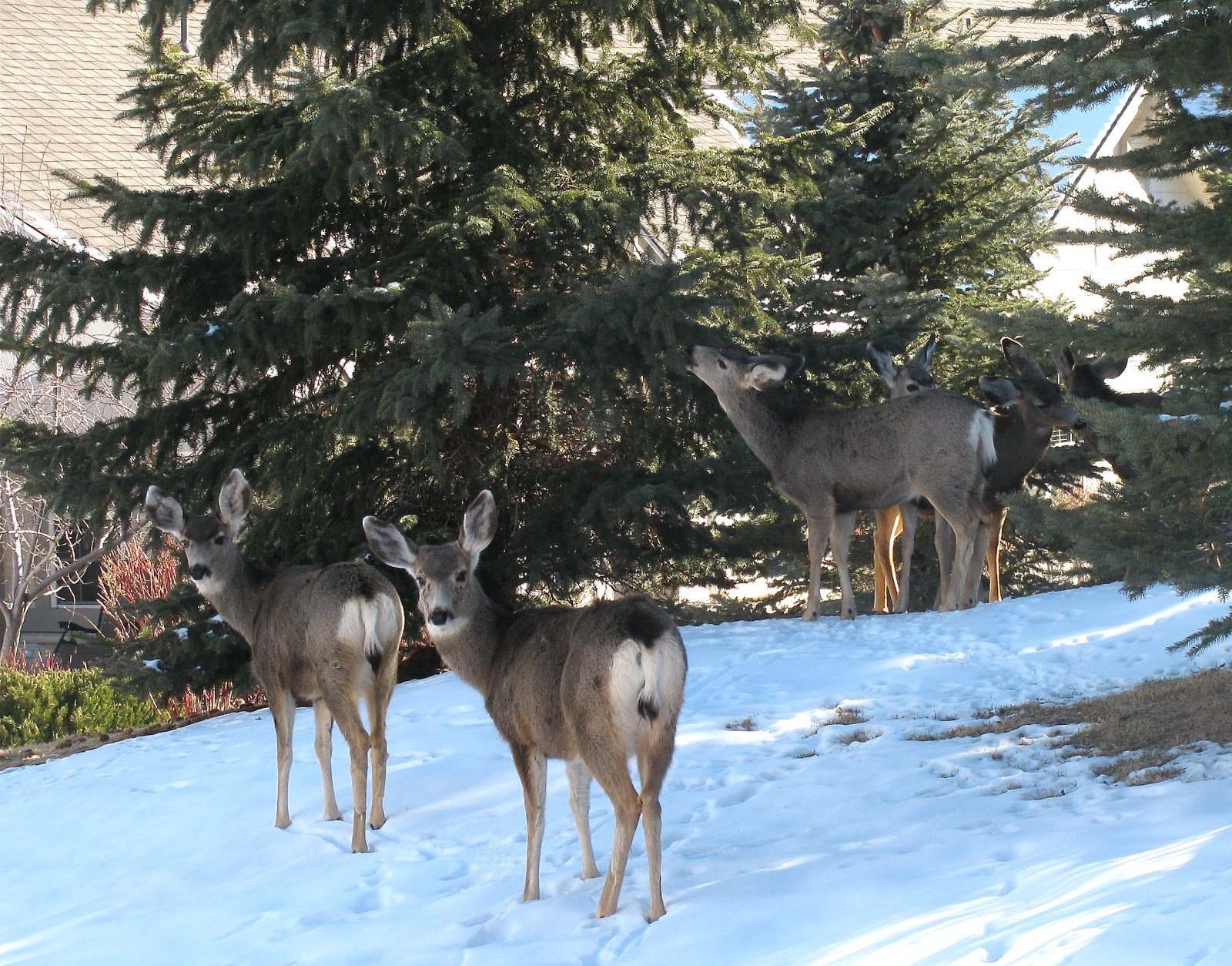 Muleys are browsers,
and they feed largely on woody vegetation
such as twigs and leaves of bushes and trees.
They also eat crops such as corn,
and they forage on landscaped plants and gardens.
http://wildlife.state.co.us/WildlifeSpecies/Profiles/Mammals/Pages/Deer.aspx

I keep reading that mule deer eat little grass,
but it has been my observation
that they are quite willing to eat it during the winter,
especially if other food is scarce. 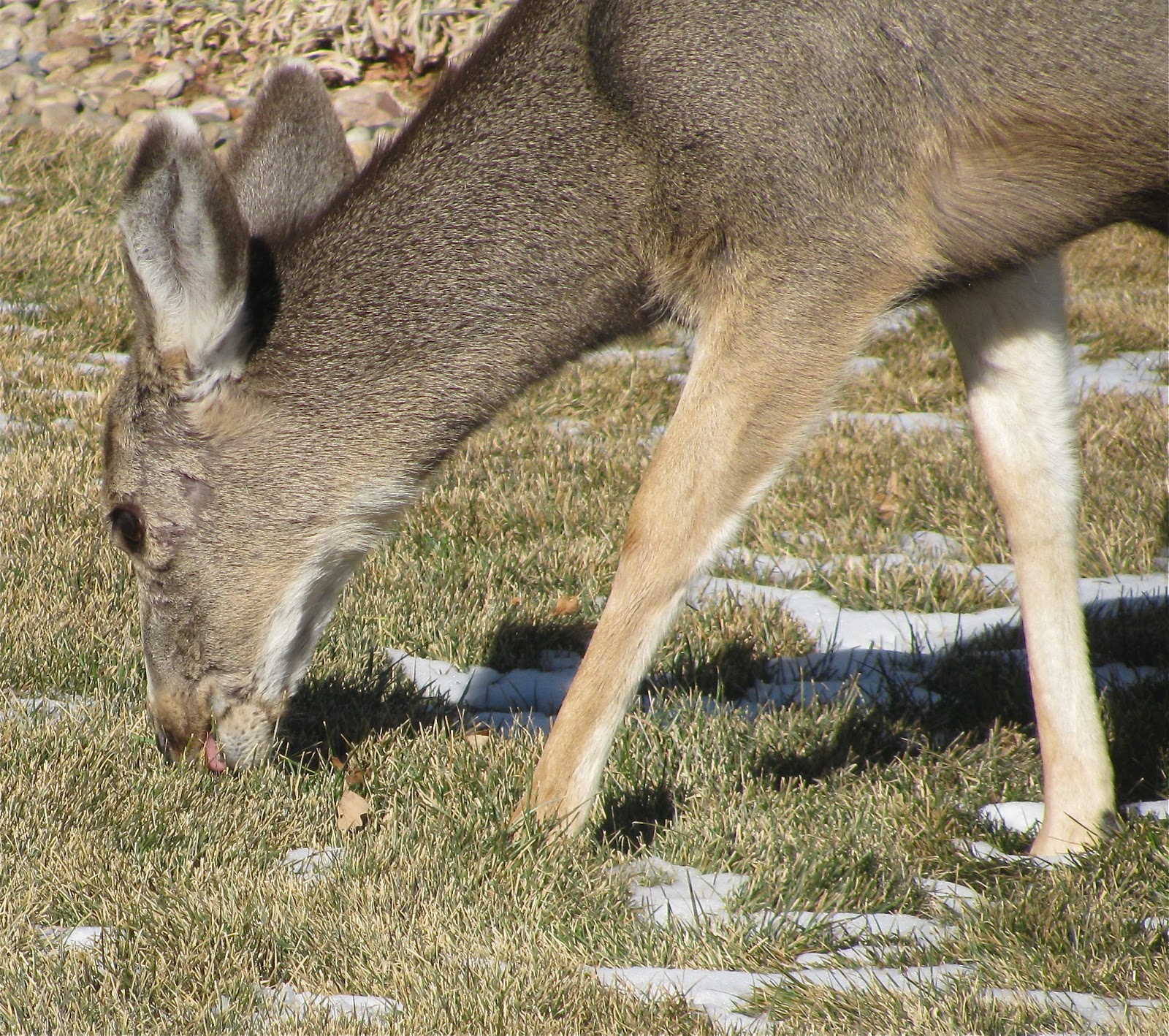 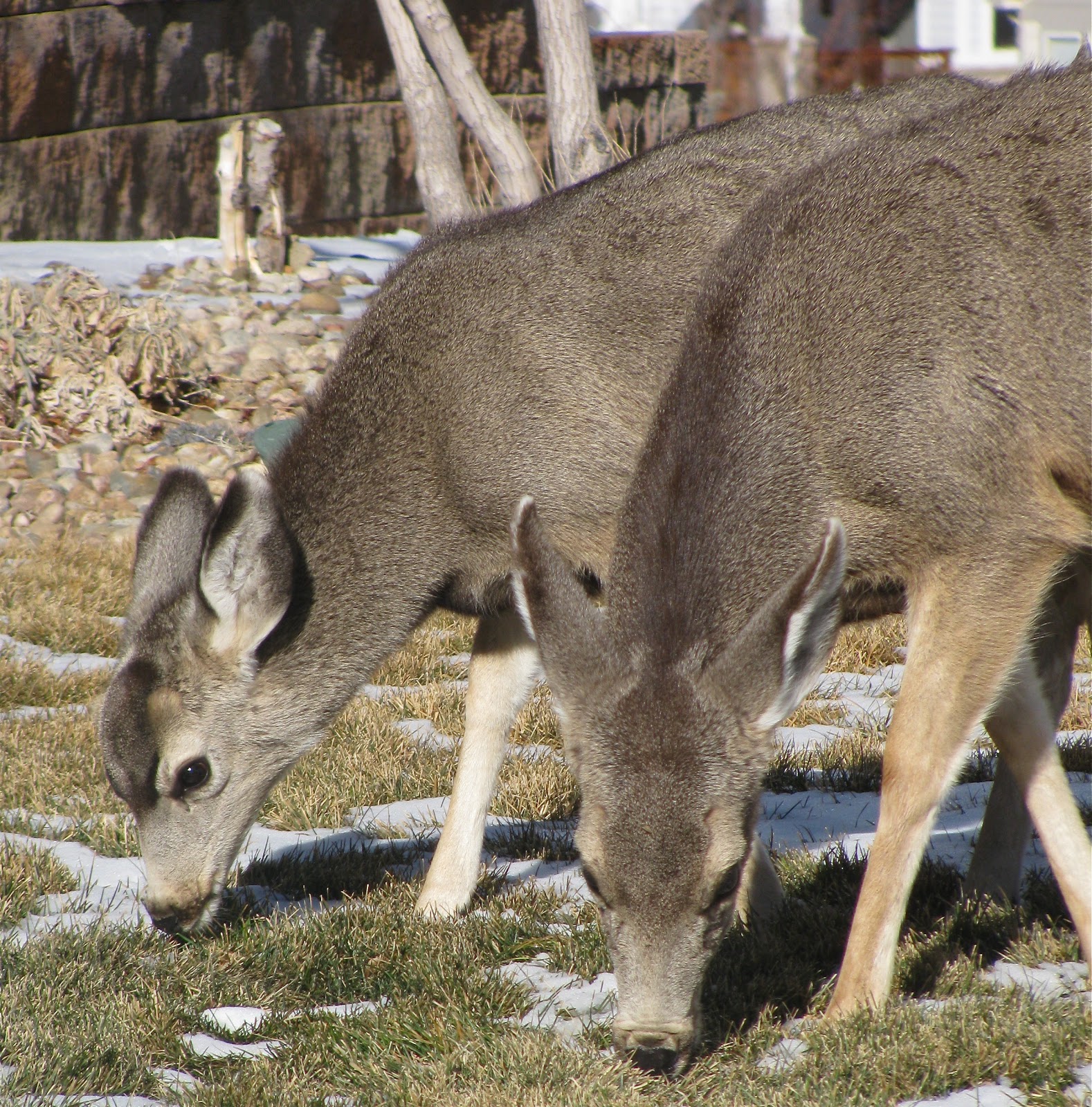 Chowing Down on Grass!

Winter is a difficult time for muleys,
and they die in larger numbers during this season.
Slowing down their metabolism
is one strategy they have to survive the winter months.
Less activity requires less food.
en.wikipedia.org/wiki/Mule_deer 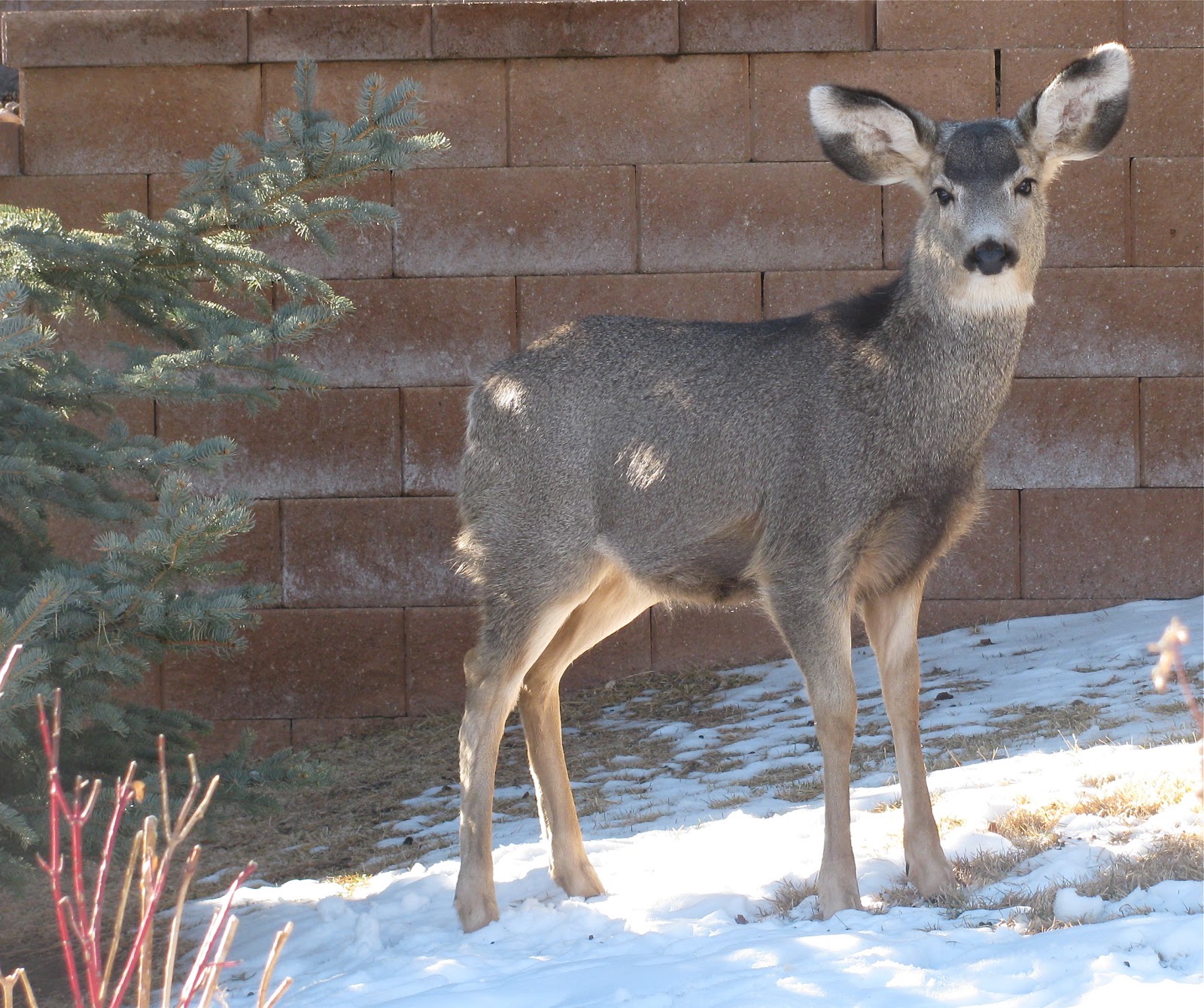 Mule deer mate in the fall,
and by now the does are showing their baby bumps.
Gestation lasts 190-200 days.
Does generally carry two babies
and give birth to them in the spring.
The fawns stay with their mothers throughout the summer
and are weaned in the fall after some 60-75 days. 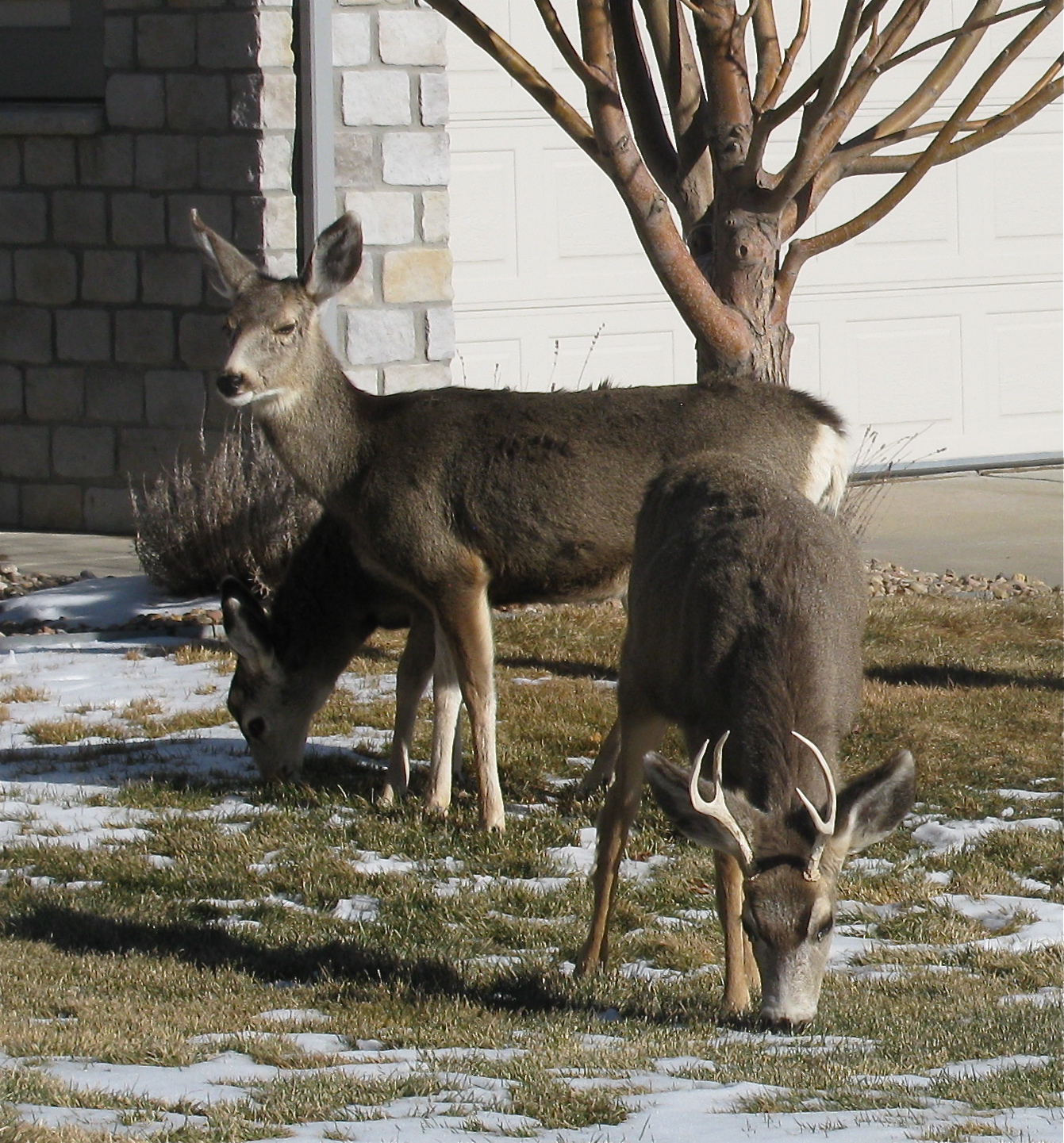 I usually don't see bucks with does at this time of year,
but this one is definitely a buck!
Normally the sexes separate after the fall rut,
and the bucks form loose bands or go off on their own.
The fall rut can be exhausting for bucks,
and they may not survive the winter as a result.
http://www.nps.gov/romo/naturescience/mule_deer.htm 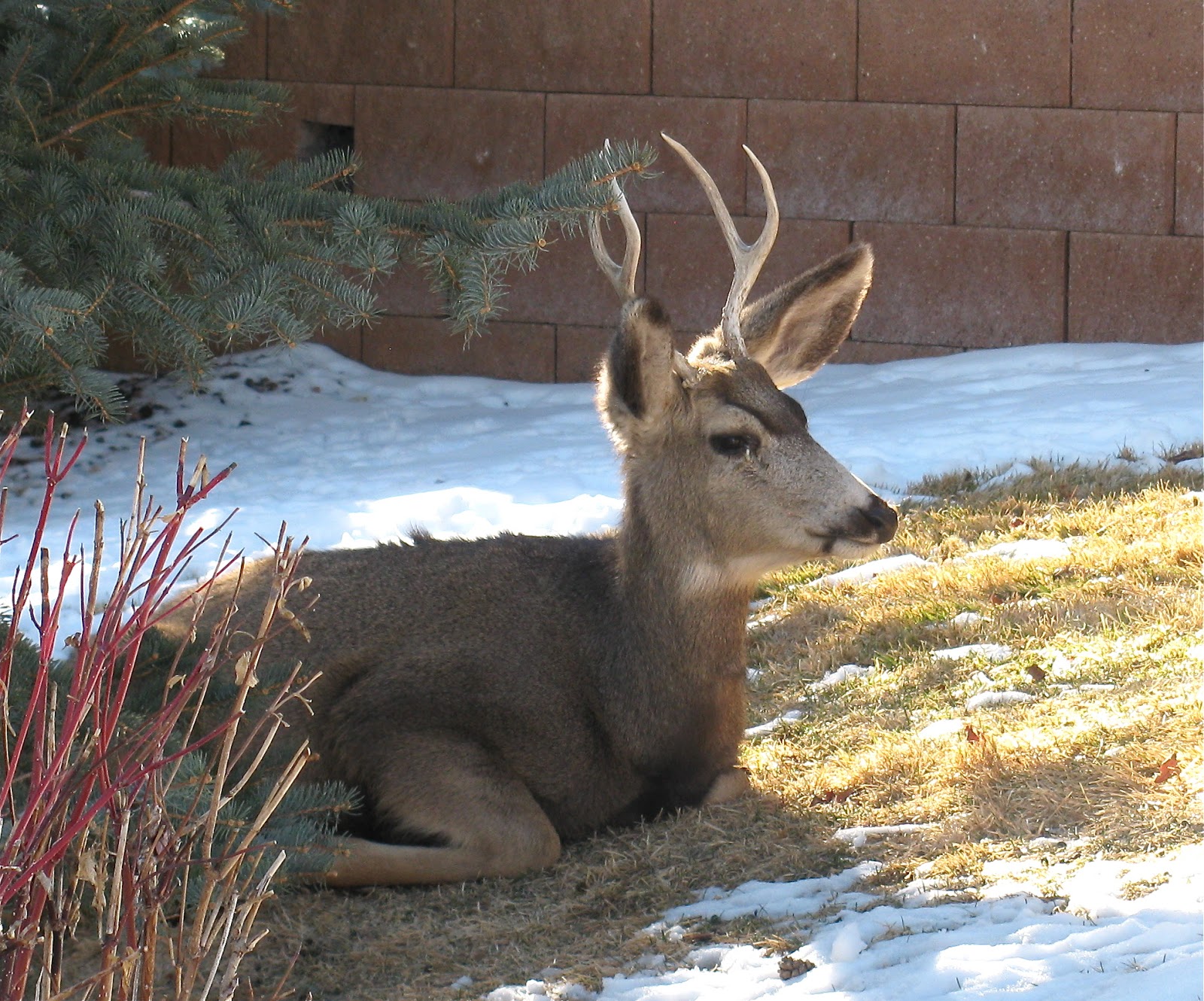 Typically mule bucks shed their antlers in mid-February.
The new ones begin growing almost immediately
after the old ones are shed.
Changes in the length of day govern
the cycle of antler growth throughout the year.
http://en.wikipedia.org/wiki/Mule_deer

Some westerners use a side by side count,
so this muley has a 2 by 2 rack.
And I am not going anywhere near asymmetrical point counts!
Points are tricky to count,
but on this muley not so much!
http://www.taxidermy.net/forums/BeginnersArticles/05/j/051039A05B.html 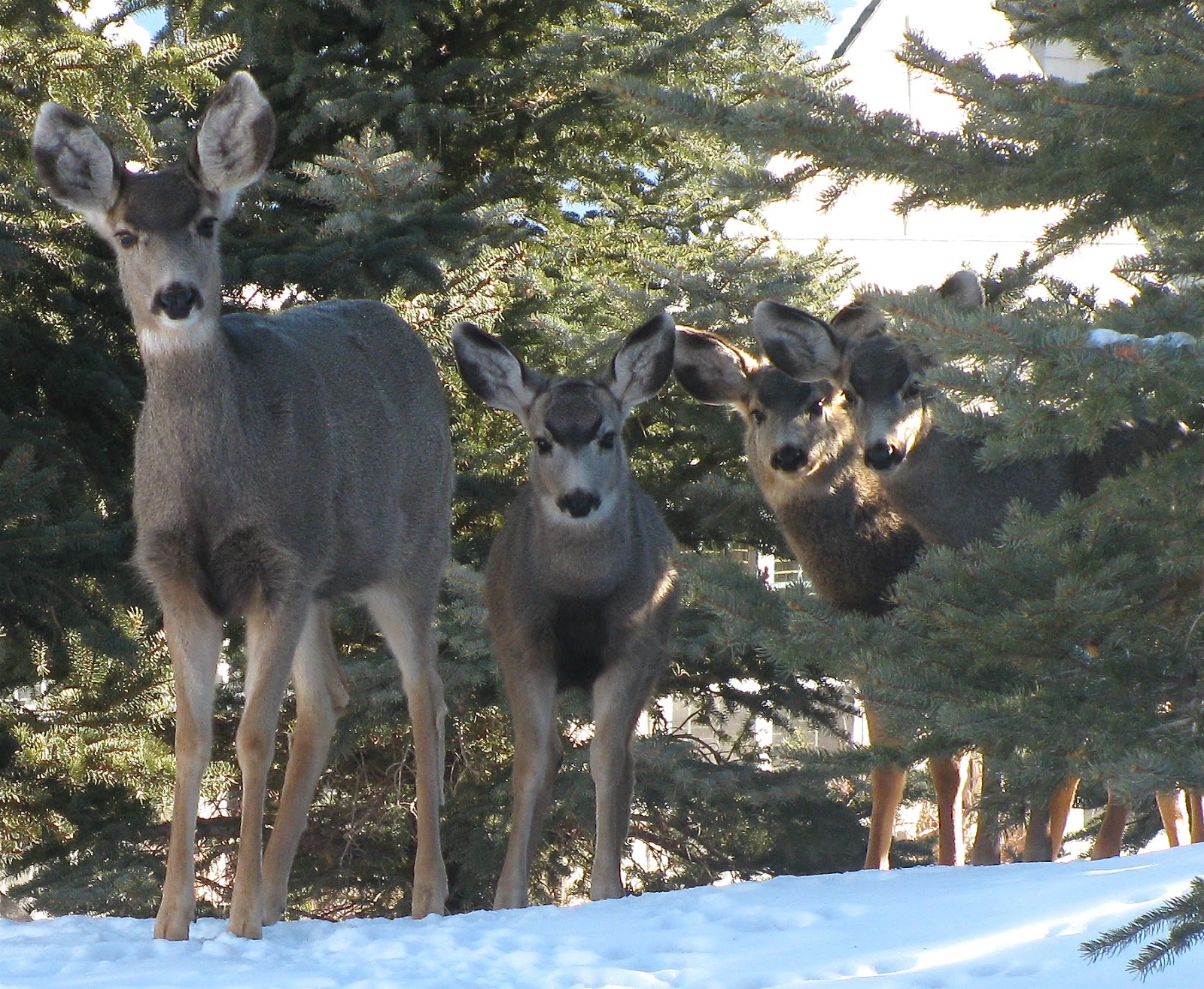 Mule deer have acute senses that help them detect danger.
Their eyes are located on the sides of their heads,
resulting in excellent peripheral vision
that enables them to see everywhere but directly behind them.
Muleys can see better than humans at night,
and they can detect the slightest movements.

Smell is another sense that is strong in mule deer,
and they can detect the slightest odors
within several hundred yards.
http://www.trophymuleys.com/muledeerinfo/muledeerinfo.htm 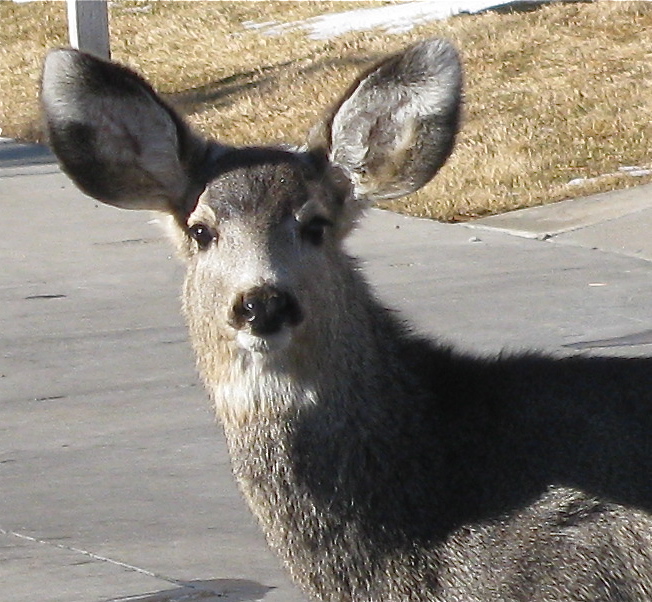 Mule deer also have excellent hearing,
much better than that of humans.
Hearing is one of a muley's main defenses against danger.
When it hears something, a mule deer will face the sound
and direct its ears toward it to find the possible threat.
http://www.trophymuleys.com/muledeerinfo/muledeerinfo.htm 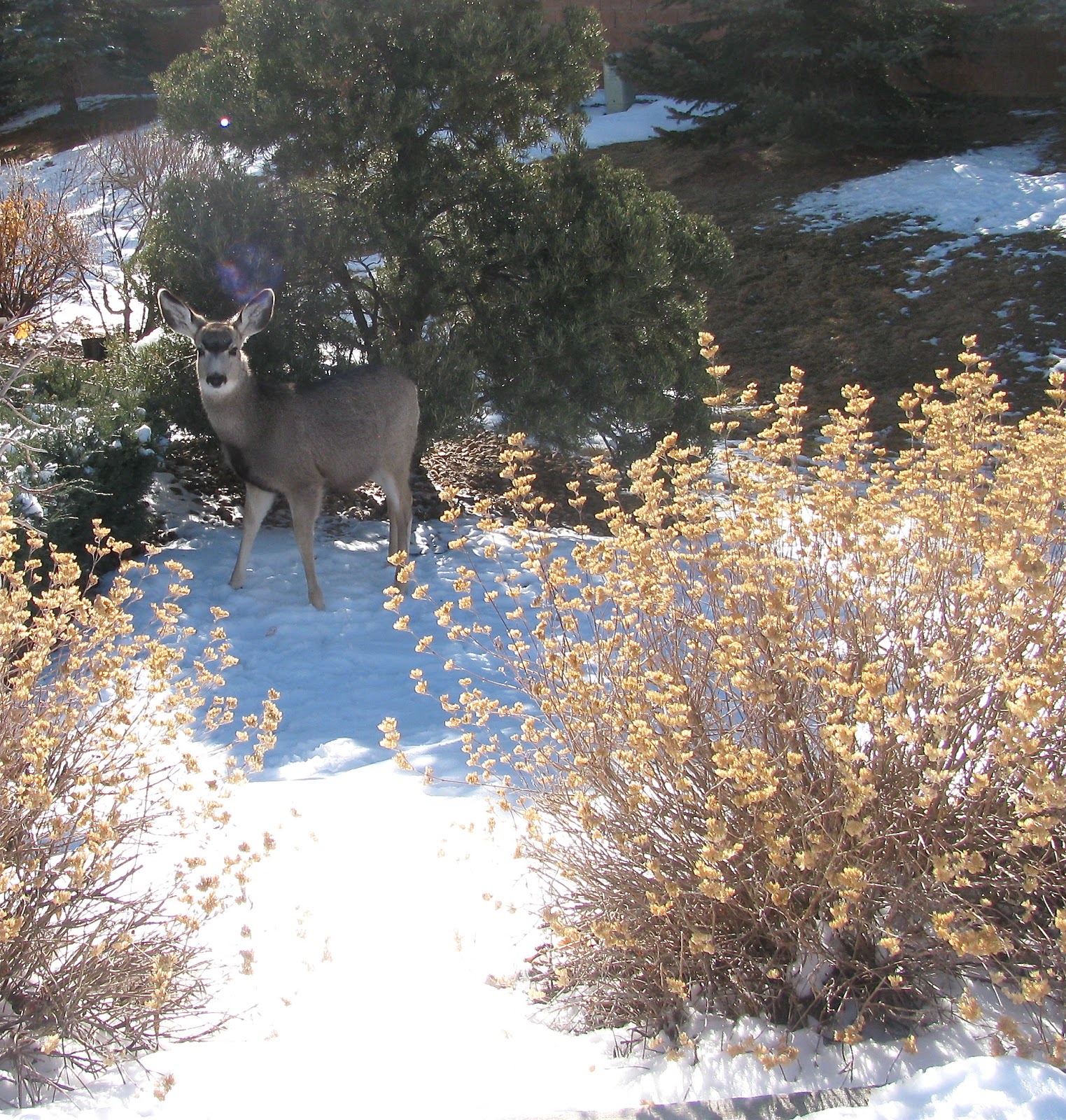 I am happy to share my habitat with my four-legged neighbors,
but I never forget they are wild animals
when I move among them with my camera.
Despite their small size,
mule deer can inflict serious or fatal injuries
on humans if they are provoked.
Fortunately such incidents are rare.