Now before I continue
our squabble story,

I have to tell you
that my Anonymous Grumpy Cat (AGC)
prides himself on planning trips well.

Terry peruses guide books,
haunts the internet,
pores over maps,
clips articles from newspapers,
and writes important, cryptic information
on bits of yellow sticky notes
stuck all over the house.

For example: on our second trip
to Hawaii over 20 years ago
Terry not only knew
the best locals restaurant in Kailua-Kona,
he knew about its blue plate specials,
and he knew what was served on those plates
for every day of the week ~
that was when and where I discovered
how much Hawaiians love Spam.

I still have his article
on the Ocean View Inn
tucked away in a photo album:
"Something for everyone at Ocean View Inn"
West Hawaii Today, Monday, June 13, 1988. 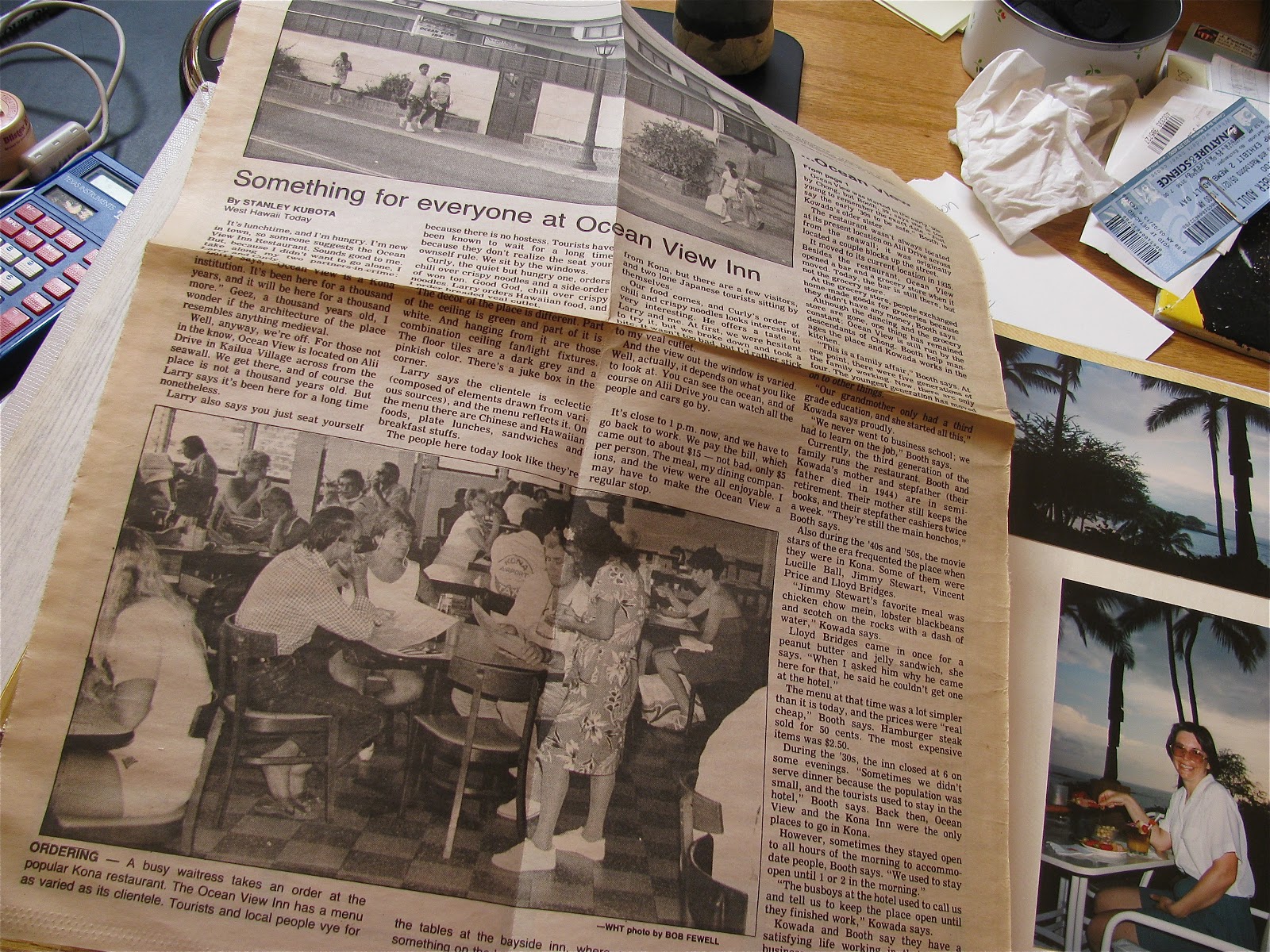 Granted the E-P picked this article up
on the way into the OVI,
but we had arrived in Kailua-Kona
knowing which day we were going to the OVI
and what the E-P was going to eat (not Spam).

Another thing about Terry is
that he loves a good deal.
He has been hot on the trail of good deals
since long before I met him.

So I knew on that second Hawaiian trip
that I would not be staying
at the Mauna Kea Beach Hotel
for $300+/night
no matter how much I wanted to. 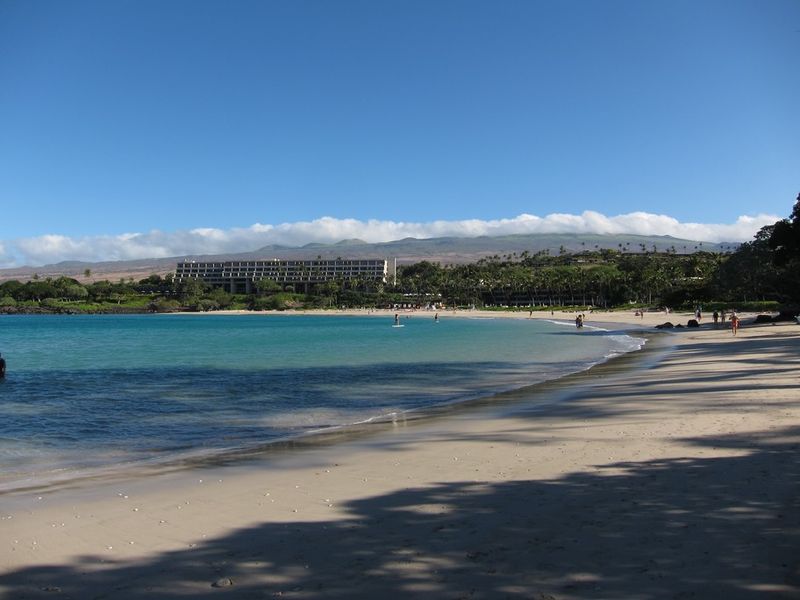 
But I did so much want to sit on its deck
drinking an umbrella cocktail
overlooking the ocean at sunset.

This was the perfect challenge for T:
How to give Louise
the ridiculous $$$$$-tourist thing she wants
while he gets the cheap he wants.
I'm sure he'd say frugal, prudent, savvy, wise!
I play more grasshopper to his definite ant!

Terry, of course, found a way.
He knew that a long-fought, successful lawsuit
allowed limited public access to Kaunaʻoa Beach
starting in 1981 ~ 15 cars at a time (back then).

So we were up before dawn
the day after the OVI blue plate specials
to drive up the coast to the MKBH,
to get in line,
to be among the first 15 cars
allowed to access the beach.

We then spent the entire day
sunning, snorkeling, and waiting for sunset.
(I saw my first live, wild moray eel!) 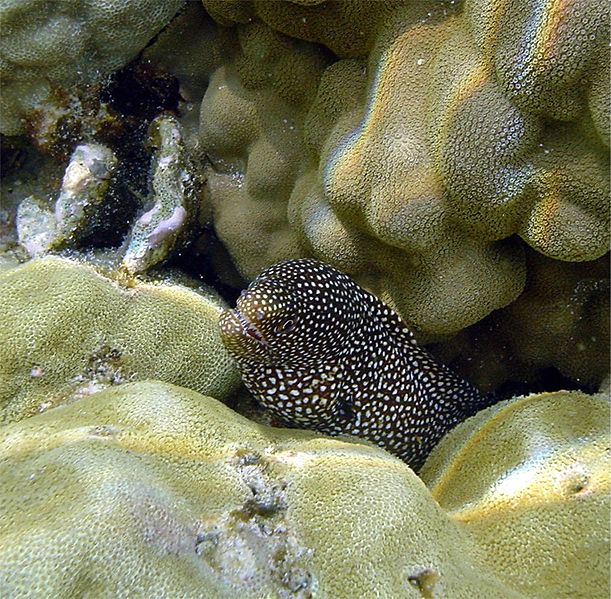 Then toward sunset,
Terry nonchalantly walked onto the resort,
while encouraging polite, Canadian good girl bred me
to act nonchalant as well.

This was hard.
I did not look like any of the resort ladies.
No ~ I looked like a drowned rat with lipstick on!
After all, I had spent about ten hours
soaking up rays,
hovering over wild eels,
and hiding in palm frond shadows
after too much sun ~
Furthermore, my hairdryer would not work
in the public changing room provided by the resort.
And, have you ever tried to apply lipstick
after it's been soaking up Hawaiian rays all day?

"Don't worry about it!
You look beautiful to me!"
said the E-P, as he strolled
onto the MKBH deck overlooking the water,
took a seat, and ordered drinks.
I had a mai-tai with an umbrella and an orchid!
I was happy!

Then the E-P surprised me
with something he had learned
during his extensive pre-trip research:
This restaurant served complimentary pū-pūs
with cocktails during Happy Hour
which nicely coincided with sunset!

"So my little rat," said he,
"You not only get an umbrella cocktail,
with an orchid,
you get dinner too!"
(On rare occasions, the E-P does speak in exclamation marks;
and yes, he did say that with great glee!) 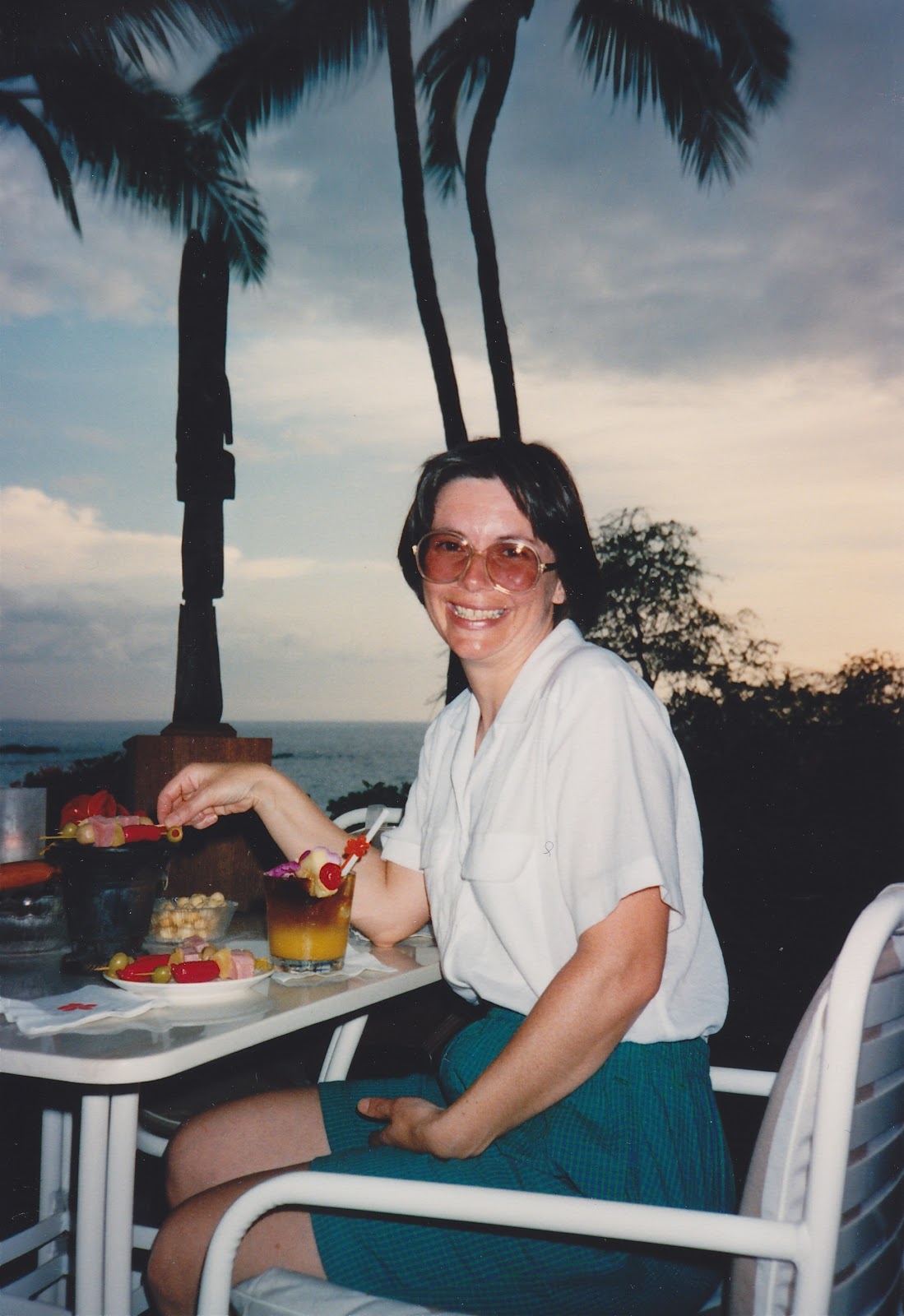 Then, to complete
my Mauna Kea Beach Hotel experience,
the E-P insisted that
we sneak into the open-air hotel corridors
to view the Hawaiian quilt and art collection.
At least that's what I think we saw,
because I was terrified
we were going to be caught
and thrown into some Hawaiian jail.

"You saw it all, Babe!
And it only cost ten bucks plus tip!"
said he, also with great glee!

Now that you understand more about Terry and trips,
back to the vacation deposit check:

AGC:  Has our Hawaiian condo vacation deposit cleared the bank?

AGC:  When did you mail it?

AGC:  You don't know when you mailed it?

AGC:  It's May 8th.
It should have cleared the bank by now.
Why hasn't it?

(He is looking very AGC now and is quite feverish). 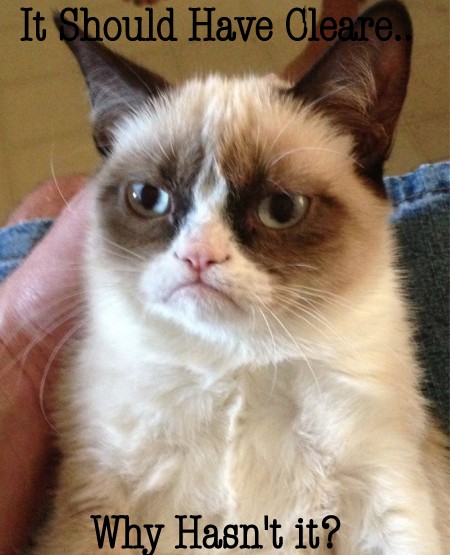 MLB:  How would I know?
Maybe the condo owner hasn't cashed it.

Did you spell her name right?
It was a long Polish name.

AGC:  What address did you send it to?
You didn't send it to Hawaii did you?
She lives in North Carolina.

Is that a 1 or a 4?
(He points to the last number in the zip code
I've written in my calendar.)

AGC:  Well, if you wrote it on the envelope like that,
it probably wasn't delivered.

MLB:  I wrote it neatly and clearly on the envelope.

AGC:  (Checking his email account)
She still hasn't answered!
Where did you mail it? 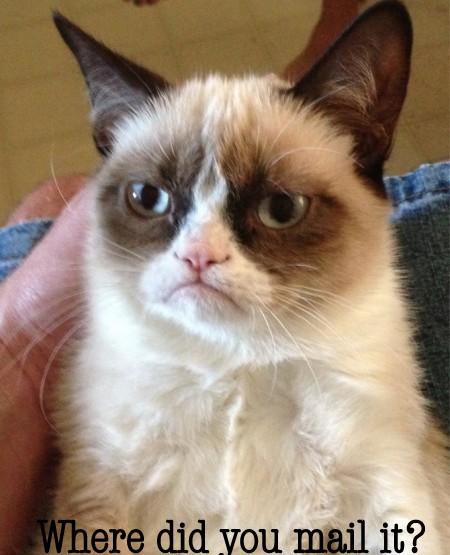 MLB:  At the mail drop-off box down the street.

MLB:  Things I've mailed since have cleared the bank.
(I am beyond The Look as I try to cook supper.)

AGC:  I bet the mailman missed it.
I should have mailed it myself.

MLB:  Don't be ridiculous, Terry!
The mailman didn't miss it!

AGC:  I bet he did!
I'm going to check that box right now!

With that the AGC ran out the door,
into the pouring rain,
and stomped down the flood-puddled street
to the mail drop-off box,
with a fever, and
obviously, not high on his antibiotic prescription.

Two minutes later
he stomps back in saying,
"That damn letter is right there where you left it!
I knew it!
If I want anything done right,
I have to do it myself!"

MLB:  That's impossible!
The mailman did not leave the letter behind!
Things I've mailed since have cleared the bank!

AGC:  I tell you,
I saw the letter right there
on top of the shelf
inside the box!
If you don't believe me,
you go check the box yourself!

MLB:  How do you know it's my letter?

AGC:  Because I saw it!
If I want something done right,
I have to do it myself!
I'm so embarrassed!
The condo lady probably thinks we're flakes!
Our Hawaiian vacation is probably ruined!
All because you can't do a simple thing
like mail a letter! 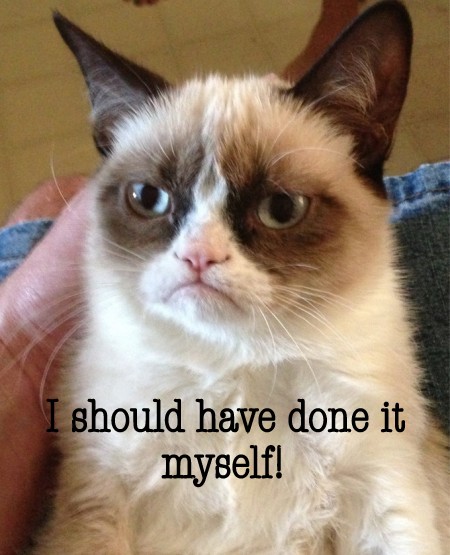 "No way in hell that letter is there!"
says I slamming down my spoon,
throwing on a hoodie,
and jumping into Terry's loafers
that he had dropped by the door.

AGC:  You better take an umbrella!
And a magnifying glass ~
so you can read whether it's
a 1 or a 4 in the zip code!

I ran out the door,
into the pouring rain,
and stomped down the flood-puddled street
to the mail drop-off box.

It was not a fashionista moment.
I hope none of the neighbors saw me
in my apron and hoodie,
with my big black socks
stuffed intoTerry's loafers,
holding a magnifying glass and umbrella,
peering into the mail drop-off box,
and mad as a wet hen.

There was a envelope there all right!
With a typed address!
Stomp, stomp, stomp
back through the drenching rain
and up the flood-puddled street.
I stormed in the door!

AGC:  WAIT! ~ before you say anything!
While you were gone,
the condo owner emailed me.
She got the deposit.
She just returned home from a trip
and opened the letter now.

What's a girl to do?
I plopped a bowl of hot chicken soup
and a small plate of food
in front of him on the kitchen counter.

While he was sipping hot soup
and looking somewhat chagrined,
he noticed a new email had arrived.

AGC:  Weesie?
Did you send the security deposit
in a separate envelope? 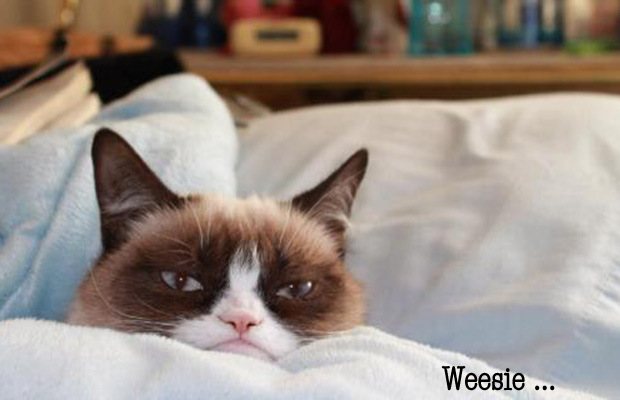 AGC:  Weesie, did you mail the security deposit?
(Peering out from under the covers)

MLB:  In the mail drop-off box down the street.

What's a girl to do?
How can I not love my little AGC
as he recovers from a kidney infection? 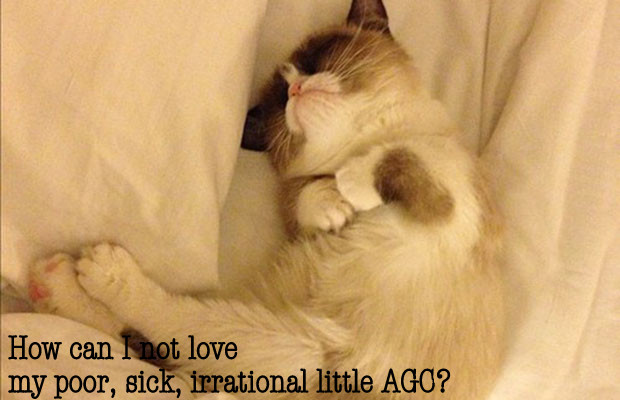 Thanks to all you kind and worried bloggers.
This all has a happy ending. ...
Posted by Fundy Blue at 10:00 AM