About that ugly scary vegetable

that lurked in our vegetable bin for many days;
seriously, would you eat something
that looked like this? 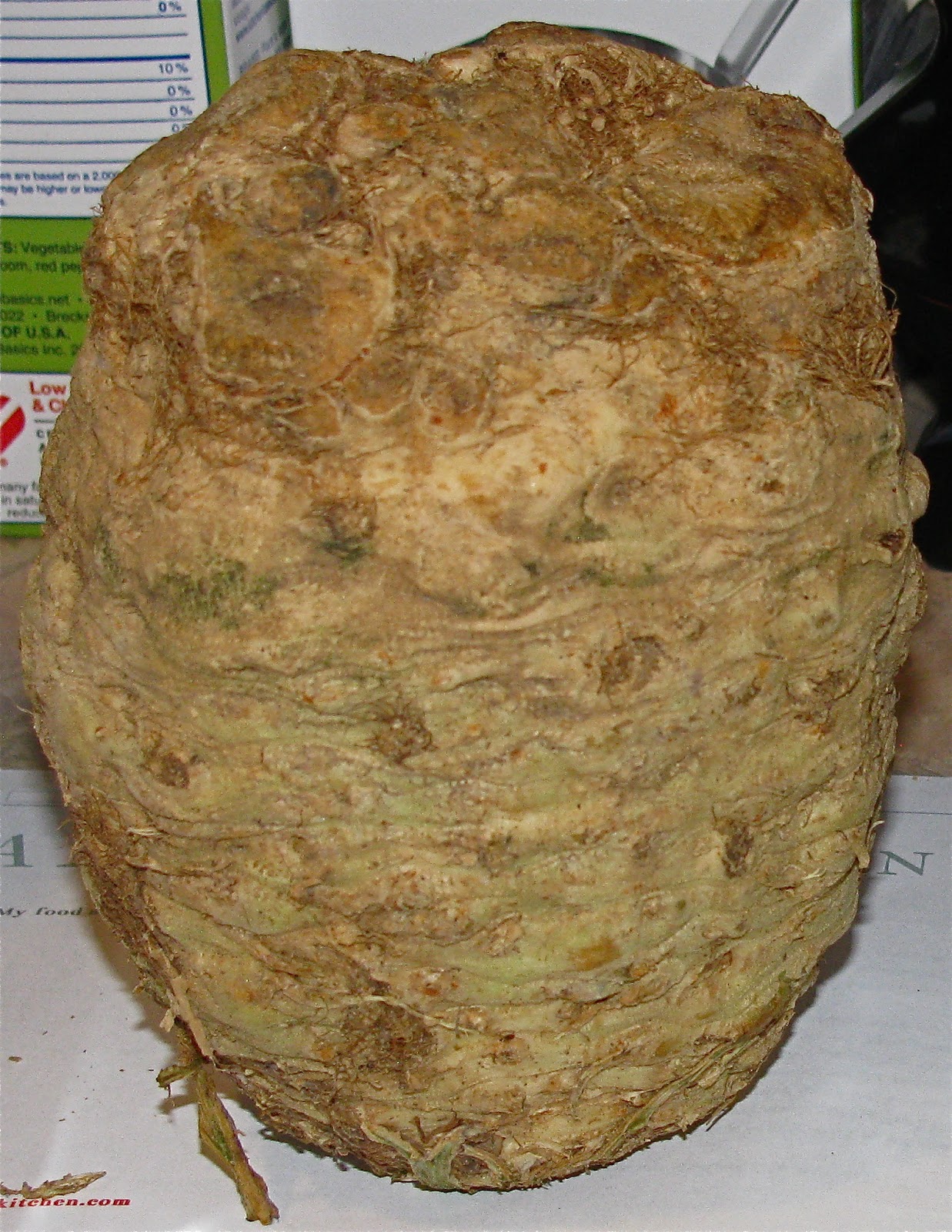 It's as hard as a rock
(that's a good thing),
and it feels knobby and rippled.

Given my traumatic history with vegetables,
you might wonder
What possessed her to buy it?
What indeed?

Every so often I get a wild idea
stuck in my head,
and I can't get rid myself of it
until I deal with it.

So I found myself at King Soopers
staring at a celery root.
Yup!  It's a celery root,
Or Apium graveolens var. rapaceum:
AKA turnip-rooted celery,
knob celery, and
its Cinderella name, celeriac.
http://en.wikipedia.org/wiki/Celeriac 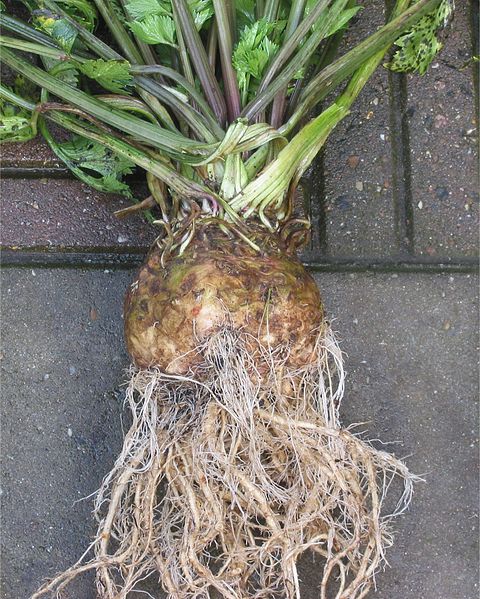 Celeriac ~ Dressed for the Ball
in Tiara and Skirt

It's all Ivan's fault!
He inspired me to buy that ugly scary vegetable,
drove me right out the door  to get it,
a bunch of celery,
and a bottle of celery seeds!

Now, I have been known to tolerate celery
in the past.
My favorite celery recipe is
Ants on a Log. 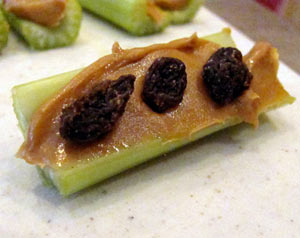 This is the perfect teacher recipe
for a healthy classroom party.

Note: third graders do not like healthy parties.
The one time a room mother and I
planned a healthy Halloween party
featuring Ants on a Log,
it was a disaster.
I've given unhealthy parties ever since!

But...
Ivan has an amazing blog
called A Normandy Kitchen,
and he posted a celery recipe
that made me salivate ~
celery!
His post was called A soup of three celeries.

I stuffed the celery and the USV in the vegetable bin
and closed the fridge door.
Every time I opened that door
that USV told me it was waiting
for a fairy godmother transformation.

Finally I couldn't stand it any more!
In a rash fit,
I channeled Graham Kerr*,
poured a glass of pinot noir,
and assembled the ingredients. 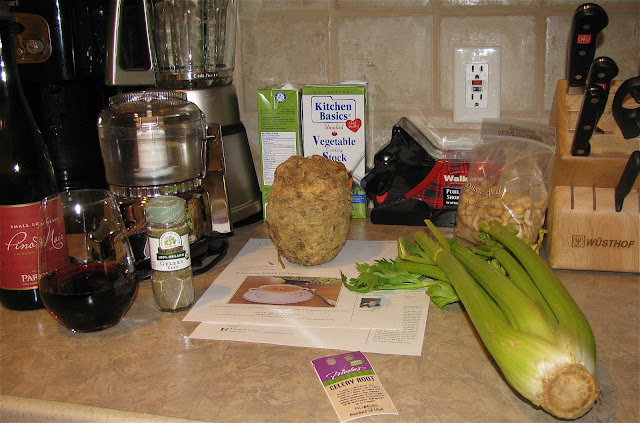 Just a Few Simple Ingredients
and a Good Recipe

Not quite sure how to dive into the unknown,
I gave the USV a good scrub. 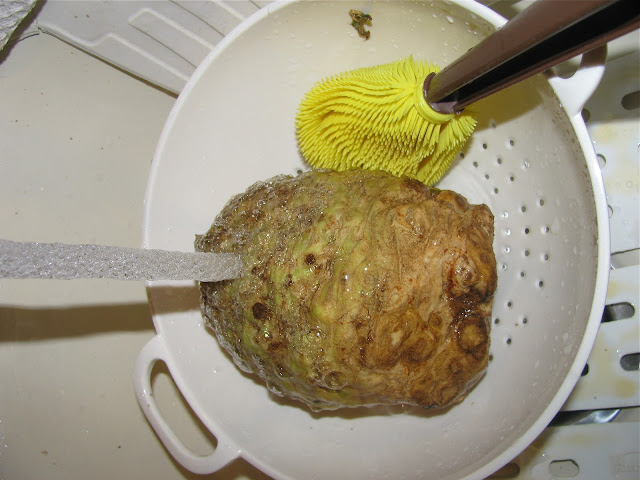 Surprise a fresh, clean, celery aroma wafted up ~
much pleasanter than fresh scrubbed potatoes or carrots.

I took a swig of wine to fortify myself,
strange vegetables, especially USVs,
intimidate the heck out of me! 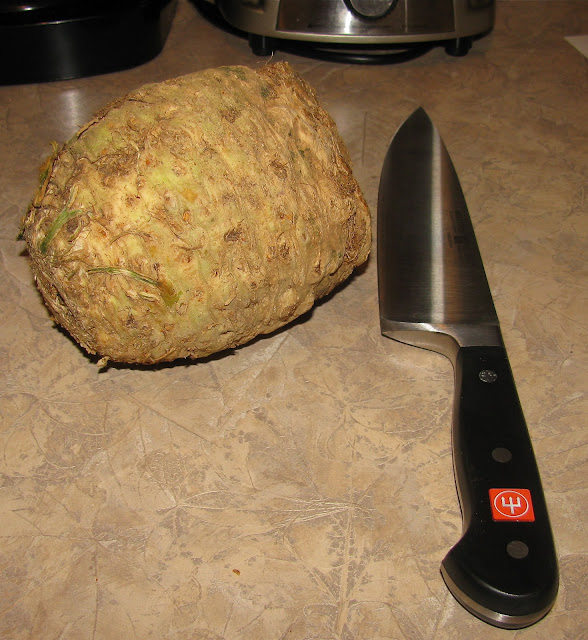 Ready for the Attack!

Said Ivan in an encouraging comment to me:
"Please be careful with the celery -
cut in half and place cut side down so it doesn't slip.
'Peel' with a knife as you need to remove
about three times that of a potato skin (more at the base).
Fingers on top and cut just below them and down (keep turning).
Rinse and ready to go." 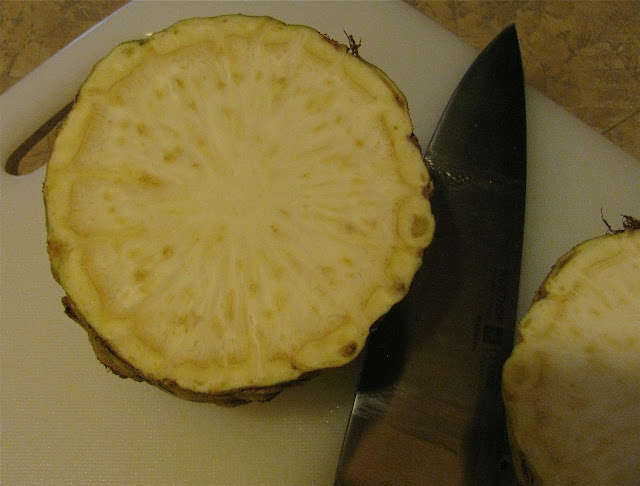 Whoa!
The loveliest and bright fragrance
hit my olfactory senses,
not just celery, but
the soul of celery!

OMG?!
Does this thing have cancer?! 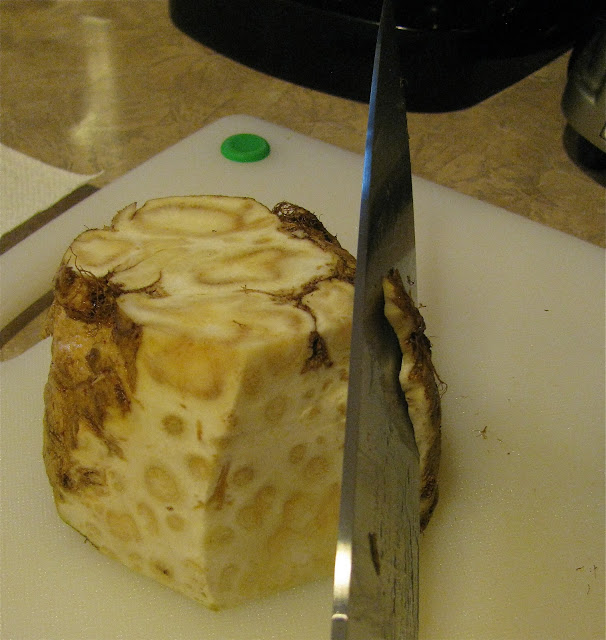 I took another swig of pinot,
and chopped that cancerous looking sucker up! 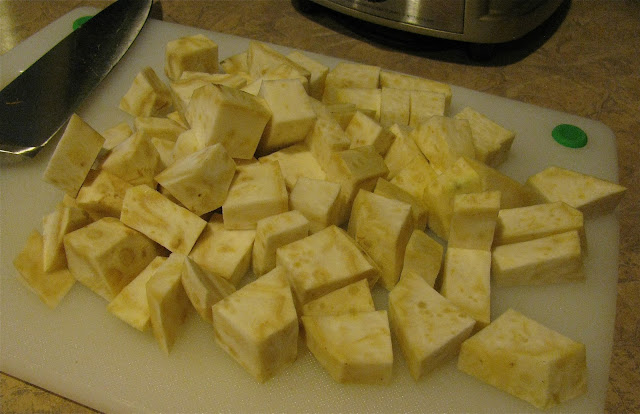 Celery Root Put in Its Place! 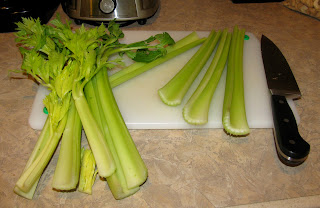 Washed
and Ready to Go! 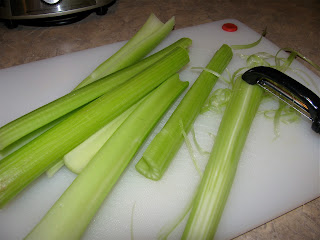 "Ivan ~ did you really mean to peel the celery sticks?"

"Yes, you can peel the outside of the celery sticks to remove the strings or snap the top and remove them by pulling down (sometimes you don't need to, depends on the season)," writes the helpful Ivan. 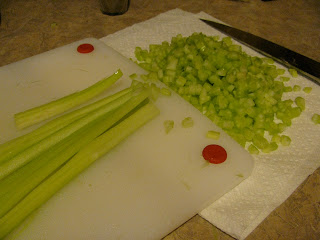 Strings in Soup
Are a Bad Thing!


Note from the Trenches!
Don't use dark brown vegetable stock.
Make your own ~ or buy
a light-colored one 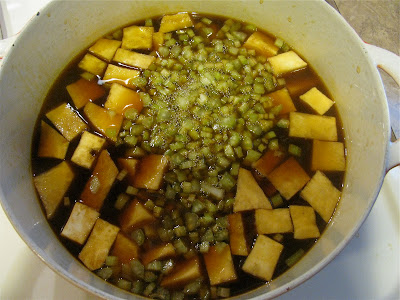 Chopped Celery, Celeriac, and Stock in a Pot

I brought it to a boil
and simmered it until soft. 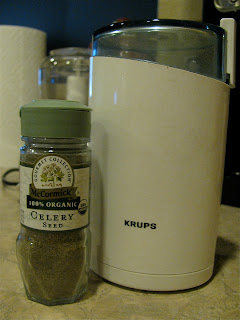 Never-the-less,
I followed the roadmap
and ground them up smaller! 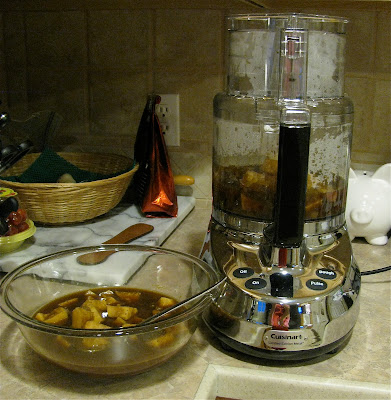 I tossed in the

celery seeds and
pulverized the
cooked celeries
in small
batches. 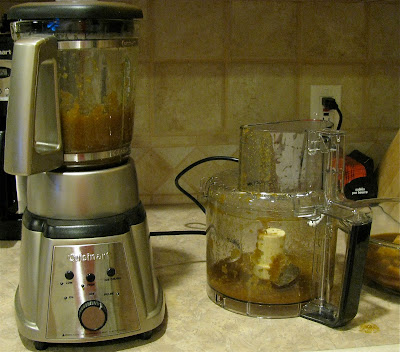 Just for good
measure,
I ran the
mixture
through
my blender. 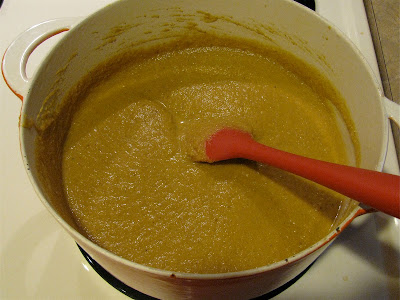 I returned everything
to the pot and
stirred in
ground up cashews.
Then I left it to
simmer until the
Guinea Pig came home.

"What's that?" said the G-P when he walked in.
Sniff?  Sniff.
"Celery?
Did you finally cook that celery root in the bin?
Smells good!"

"Why don't you try some?"
said I who had not taken a sip,
thinking of Zhang Mei,
the Dragon of Terror and Peril,
and his soup
in The Chinatown Death Cloud Peril.

The G-P would be my taster!
I placed a bowl artfully festooned with cashews
in front of him. 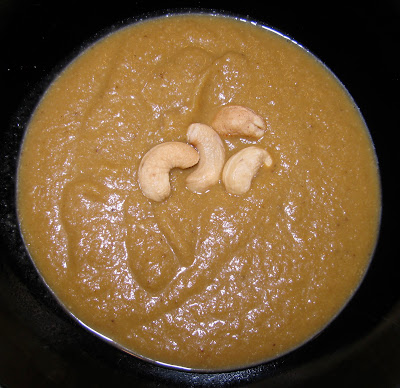 "Next time I'll use a different vegetable stock,"
I quickly interrupted.

"I'm just finishing my wine,"
said I, as I carefully watched the taster.
He didn't keel over on top of his soup bowl
or slump on the floor.
Nothing happened.

I ladled a small bowl for myself,
spooned up a tiny amount,
and touched it with the tip of my tongue.


I didn't keel over on top of my soup bowl
or slump on the floor.
Nothing happened.

"Wow!  This is pretty good!
It's delicious!" said I,
and I finished my bowl.

"Celeriac is good raw with mayonnaise (or Greek yoghurt and lemon) ... and it freezes well,"  wrote Ivan.

I'll attempt anything Ivan posts on his blog,
well ~ maybe not kale.

To get the recipe for A soup of three celeries,
you just go to his excellent blog!

*For those of you who may not know,
Graham Kerr is the Galloping Gourmet,
and he ~ despite the funny clip ~
was a great inspiration to me as an excellent TV Chef.
Check out this short and hilarious video.
Graham Kerr always cooked
with a glass of wine at hand!

For the background posts on Ugly Scary Vegetable
you may go to: