When people think of Iceberg Alley, they usually think of St. Anthony, Newfoundland.


But this small town is only one spot along the alley.
Icebergs and floes sweep down from Northern Canada and Greenland,
past the coast of Labrador,
and along the eastern coast of Newfoundland
from the tip of the Great Northern Peninsula
to Torbay and St. John's on the Avalon.

In 2011, when I finally had the opportunity to realize my dream of visiting Iceberg Alley, my husband, two of my sisters, and I chased icebergs in and out of little coves in Labrador.

But first we had to get there!

One way is to take a ferry from St. Barbe, Newfoundland,
across the Straight of Belle Isle, to Blanc Sablon, Quebec. 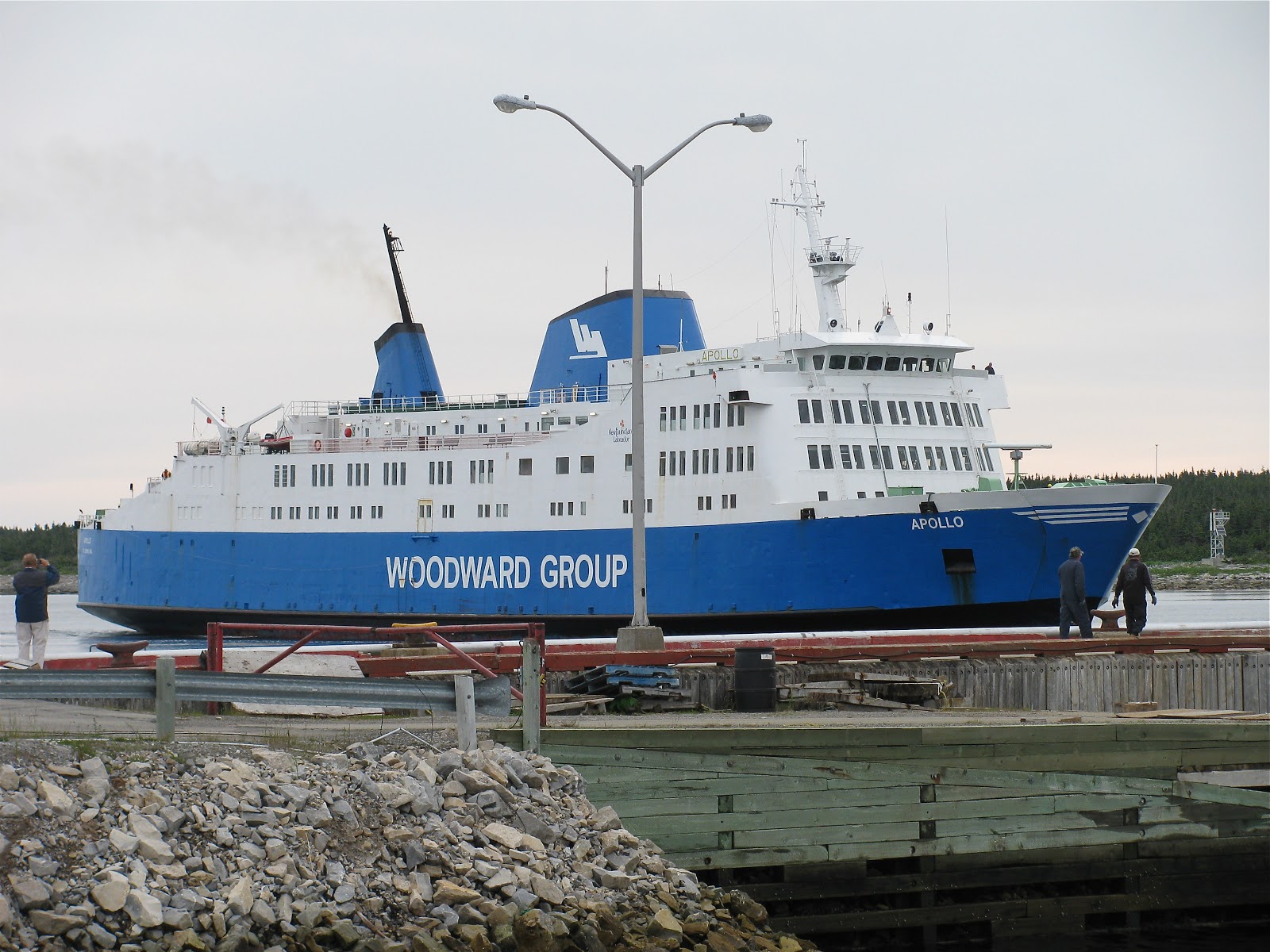 This takes about one hour and forty-five minutes, depending on weather and ice conditions.
That's crossing the water time, not waiting in line to board the ferry, boarding, and exiting! 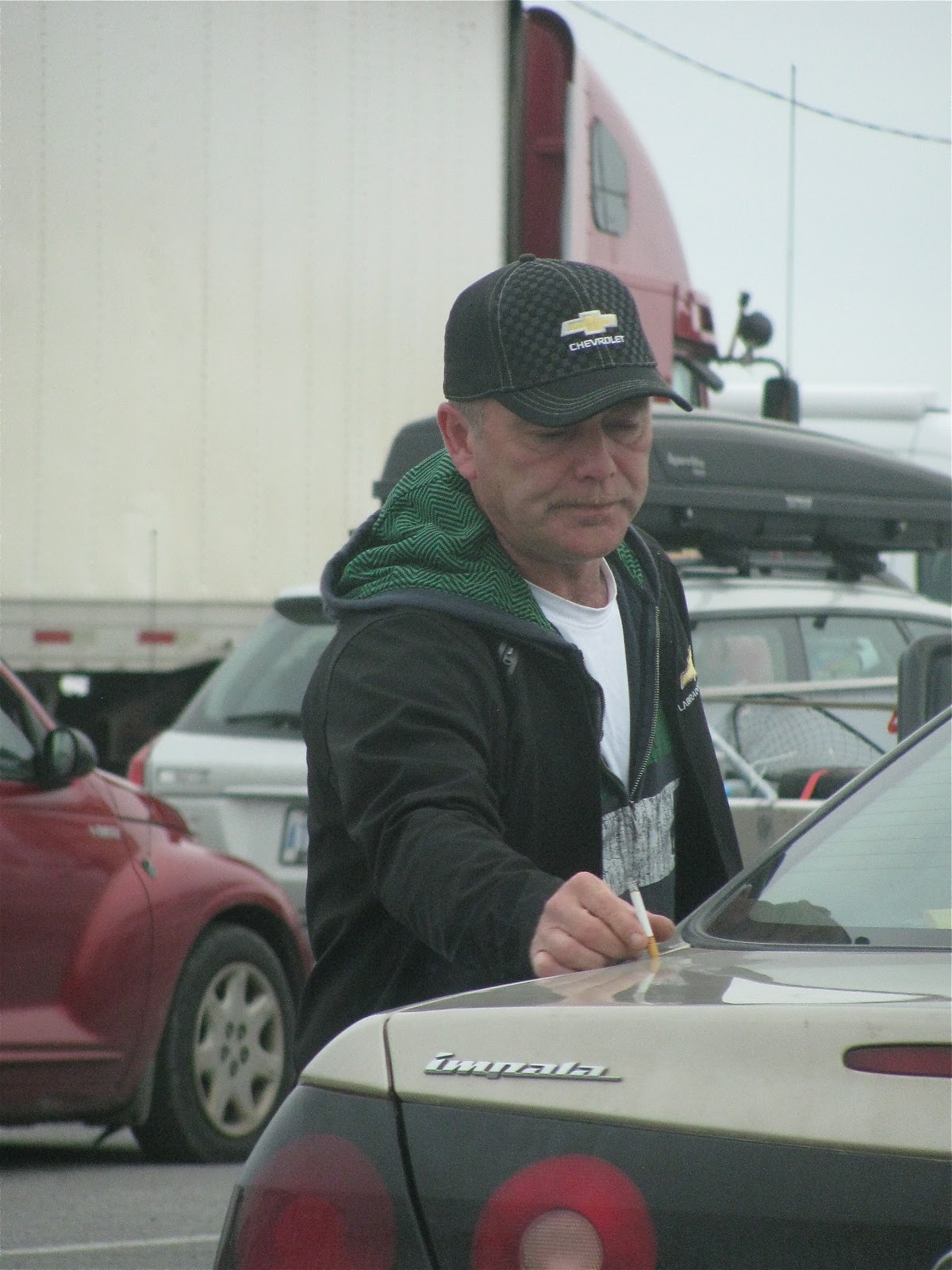 Essence of a Newfoundlander!

Waiting in line for a ferry can be tedious, but you'd be surprised at what you can spot!
I love this shot because it captures the spirit of a Newfoundlander.
Newfies are practical to their bone marrow.
And they make the most of any situation. 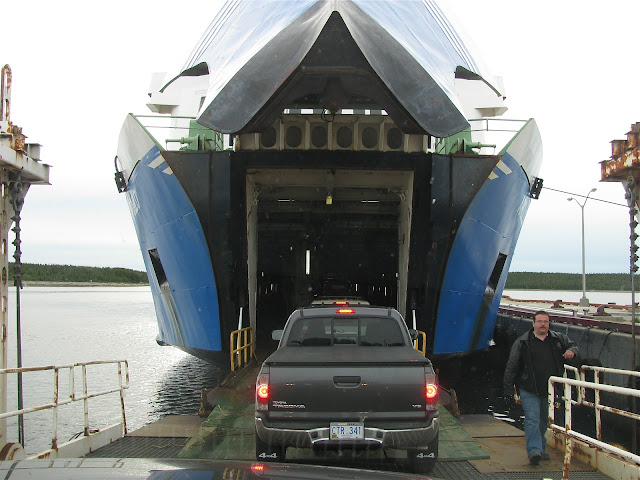 Into the Belly of the Whale

It's not as hard as it looks!
It used to be much more difficult to drive your car onto the ferries of old. 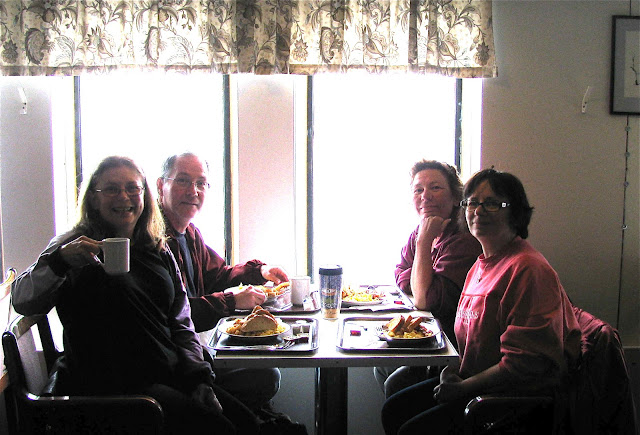 Lots of people head immediately for a warm breakfast.
(L to R:  me, Terry, Barb, Bertie) 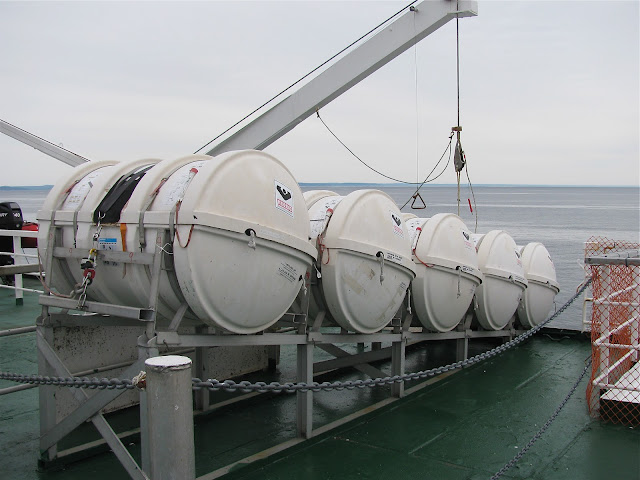 Life Rafts with The Great Northern Peninsula on the Horizon

You think it can't happen!

My sisters have been stuck in ice for several days on a crossing
from Nova Scotia to Newfoundland.

Some of my cousins were put out on the ice until helicopters could rescue the passengers.
That time the ship did not go down!

But the M. V. William Carson, a ferry I sailed on a number of times,
sank in 500 feet of water not that far from where I took this picture of the life rafts.

Rumor has it that the storied William Carson carried 4,000 cases of beer to the bottom.
Rumor also has it that many a Newfie has spent time scheming how to salvage that beer!

I ALWAYS know where the life rafts are! 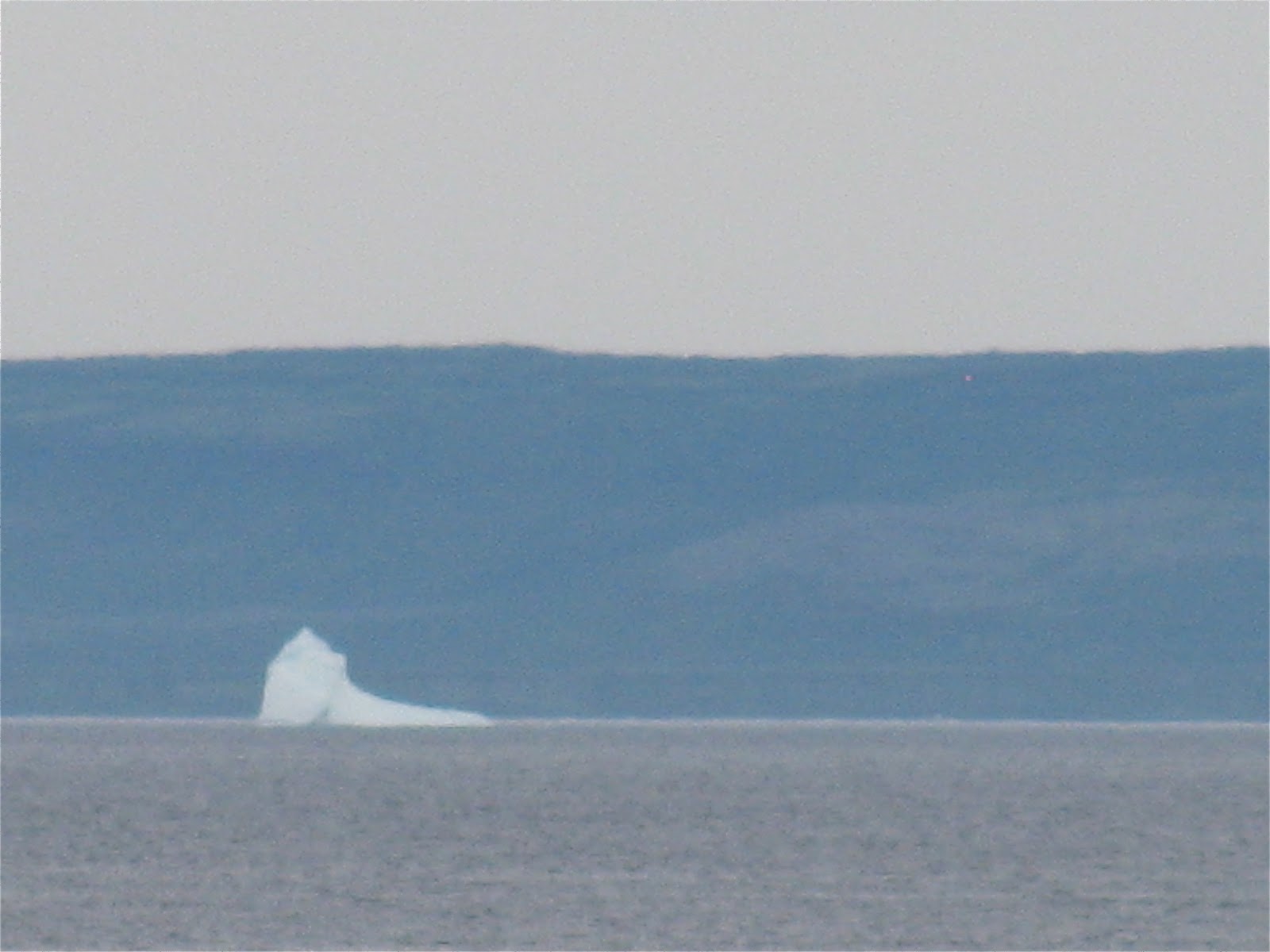 
I'm not sure which was more exciting:  spotting the iceberg or getting close to Labrador! 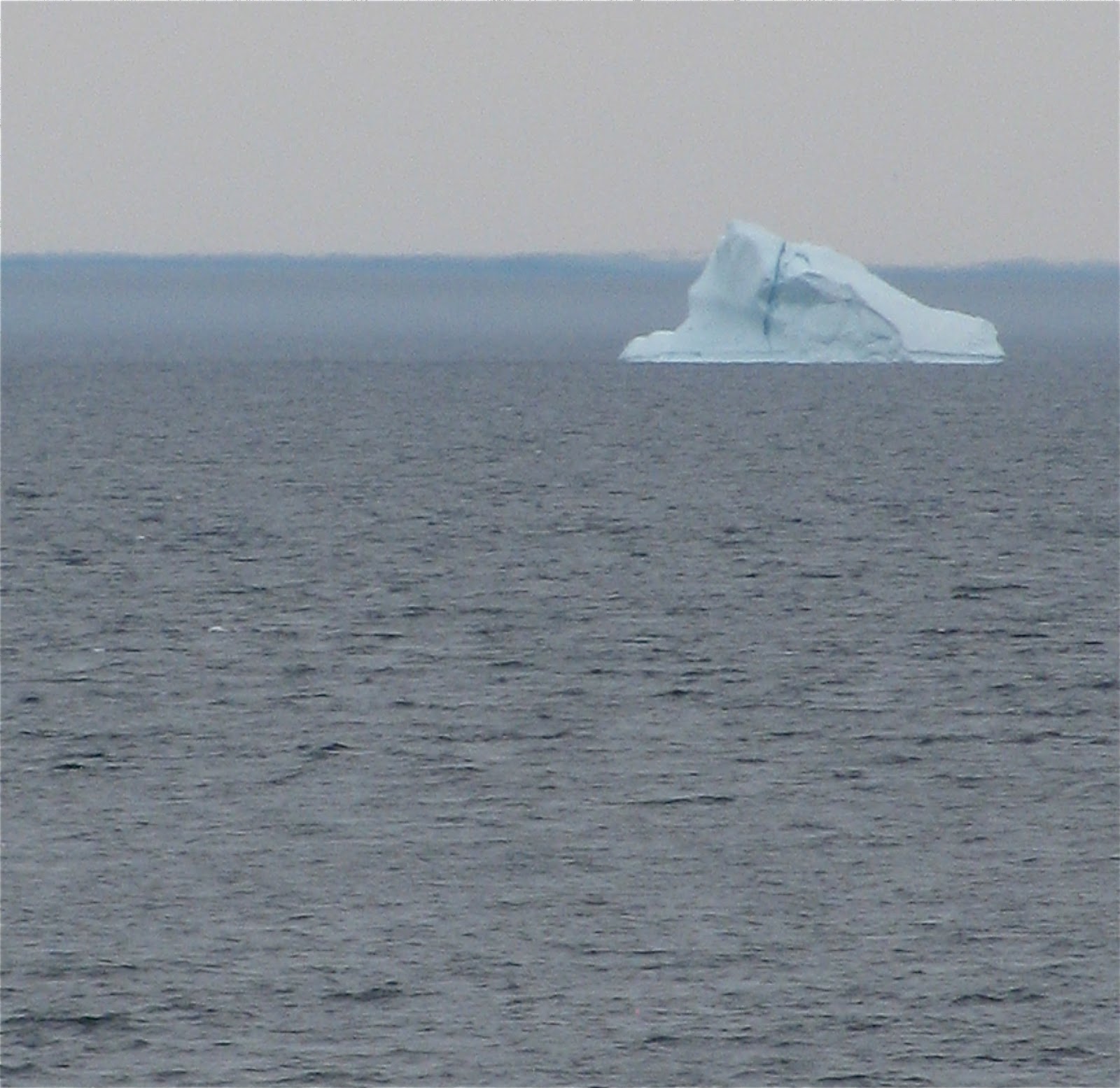 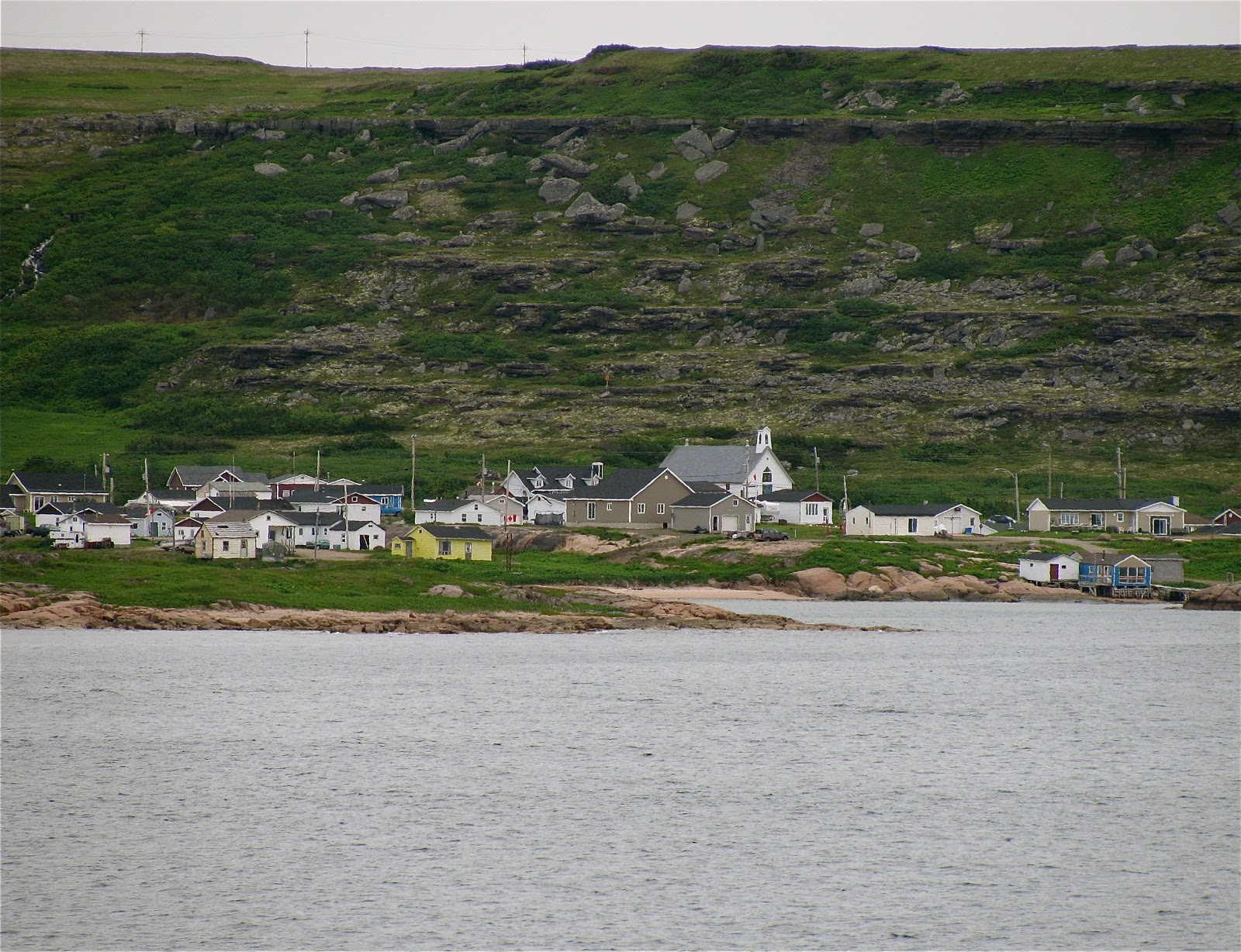 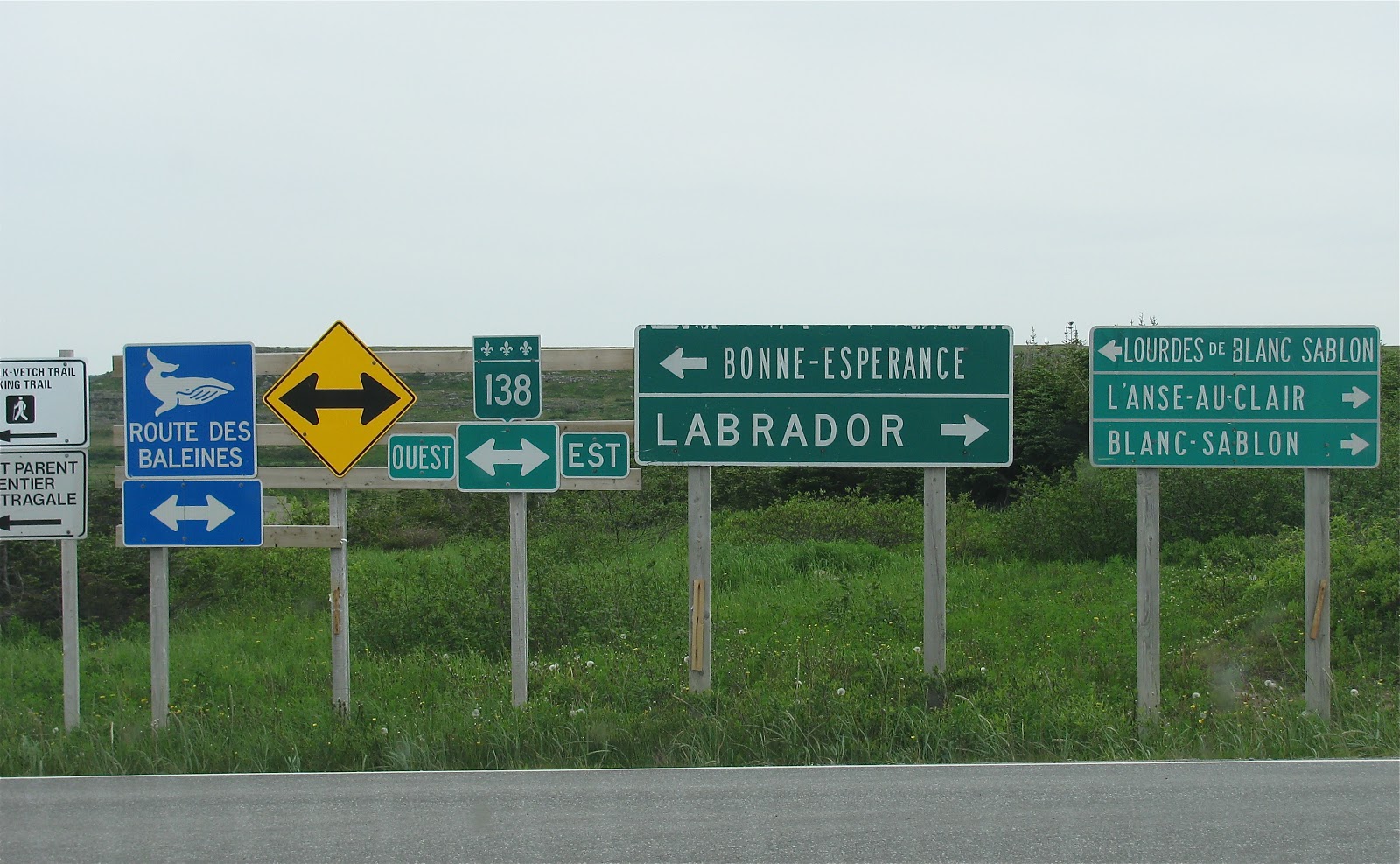 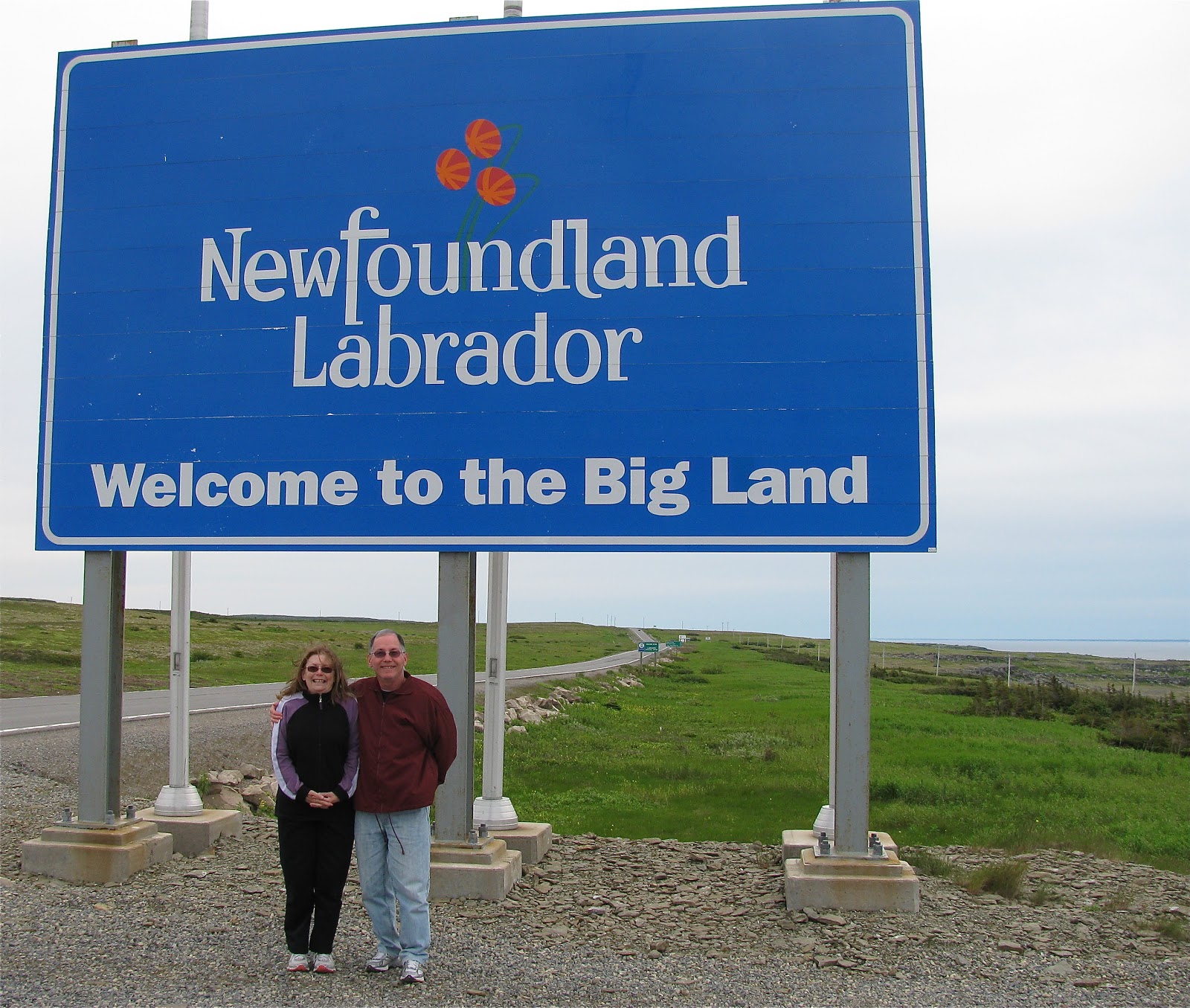 And it is a Big Land!

Scratch another item off that Bucket List.
I am finally standing on solid ground in Labrador! 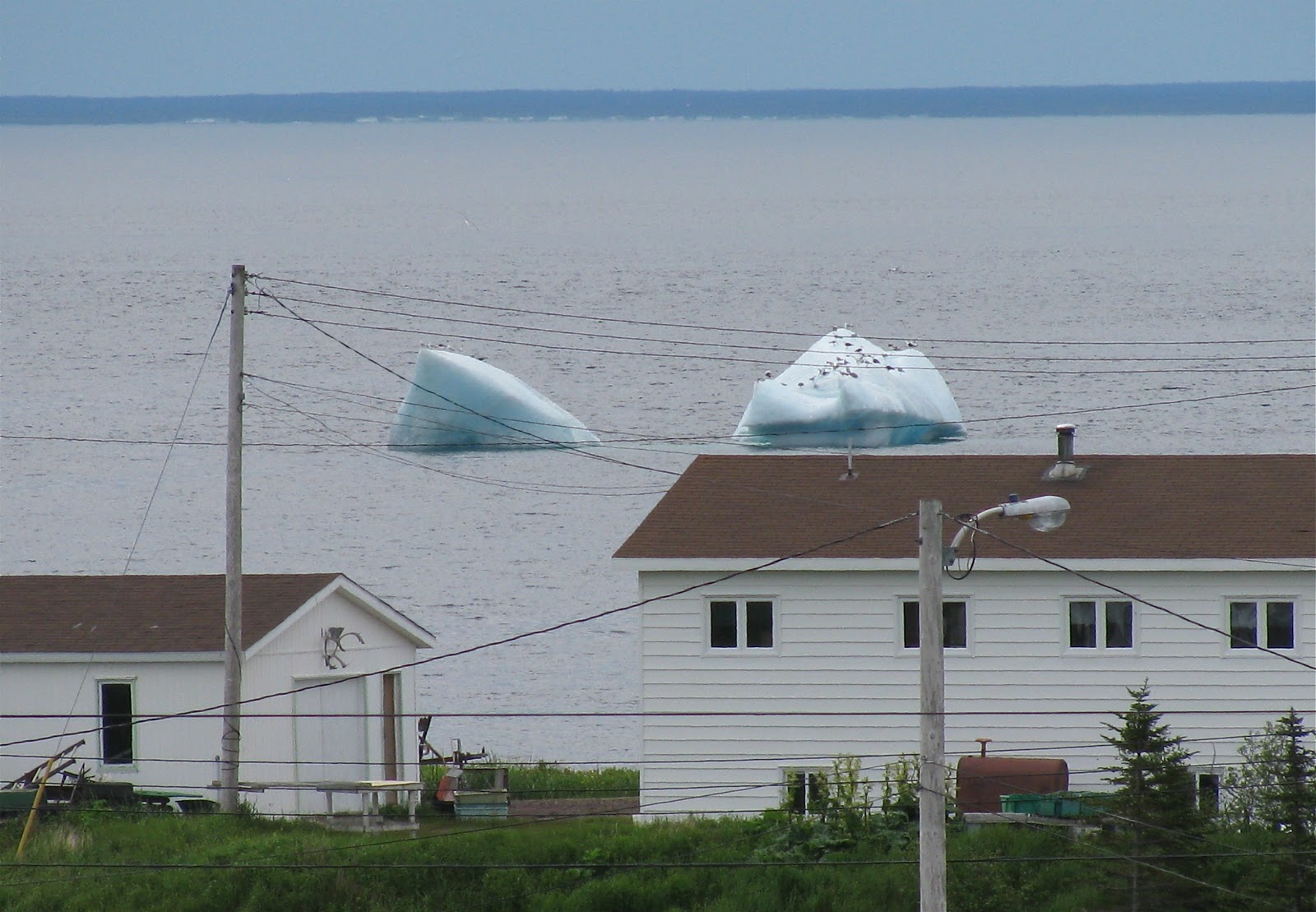 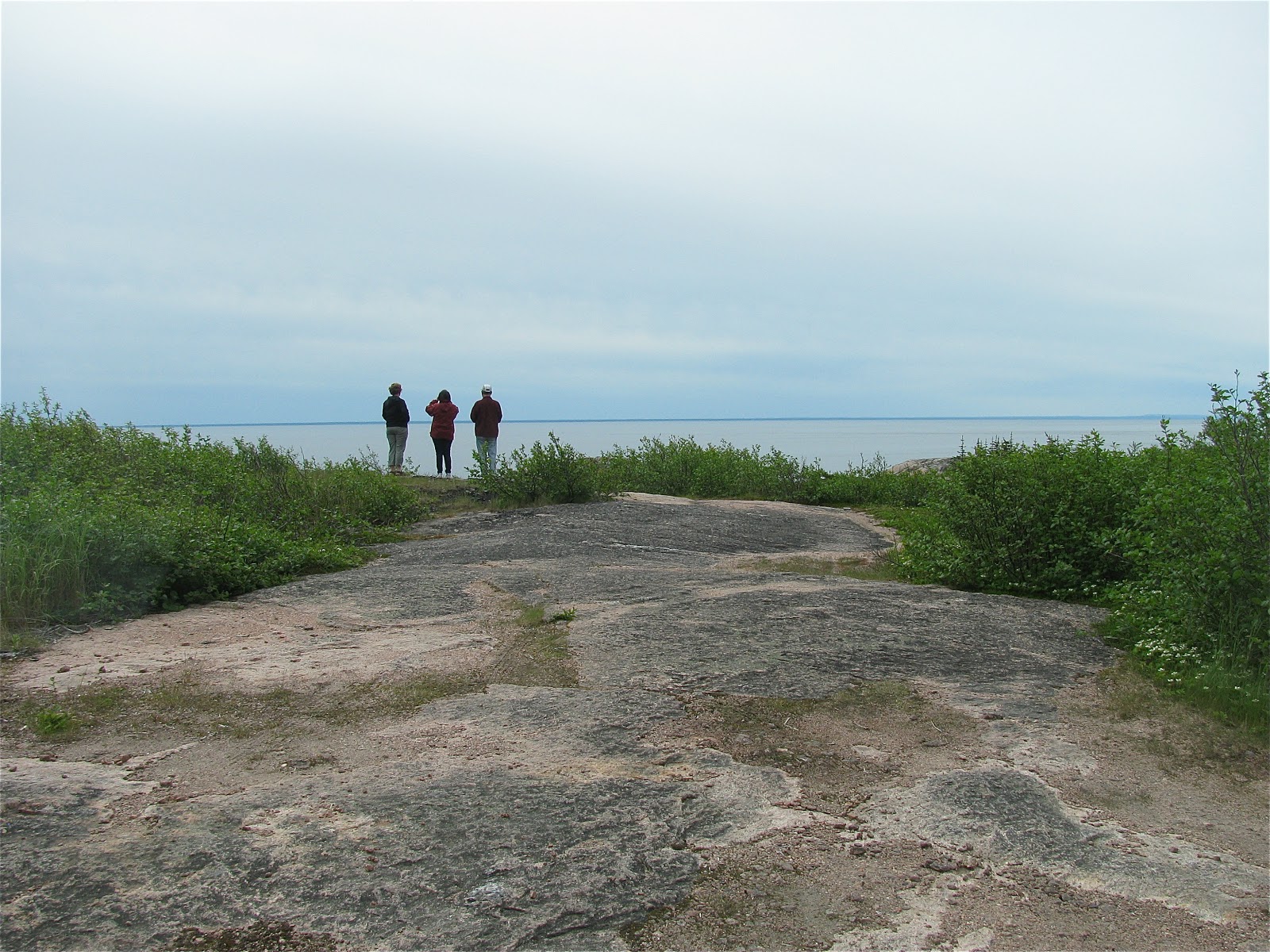 On the Hunt in an Empty Land 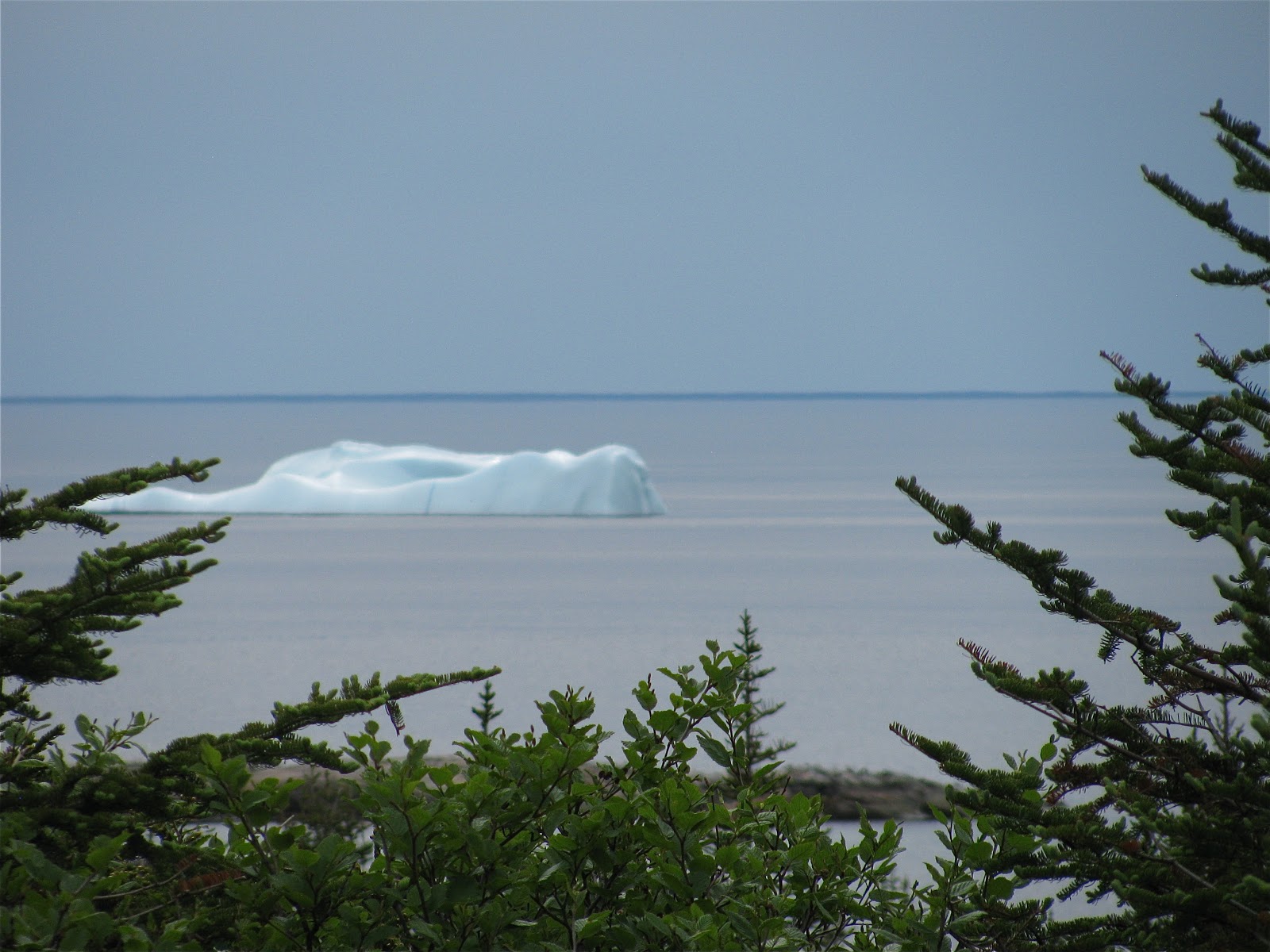 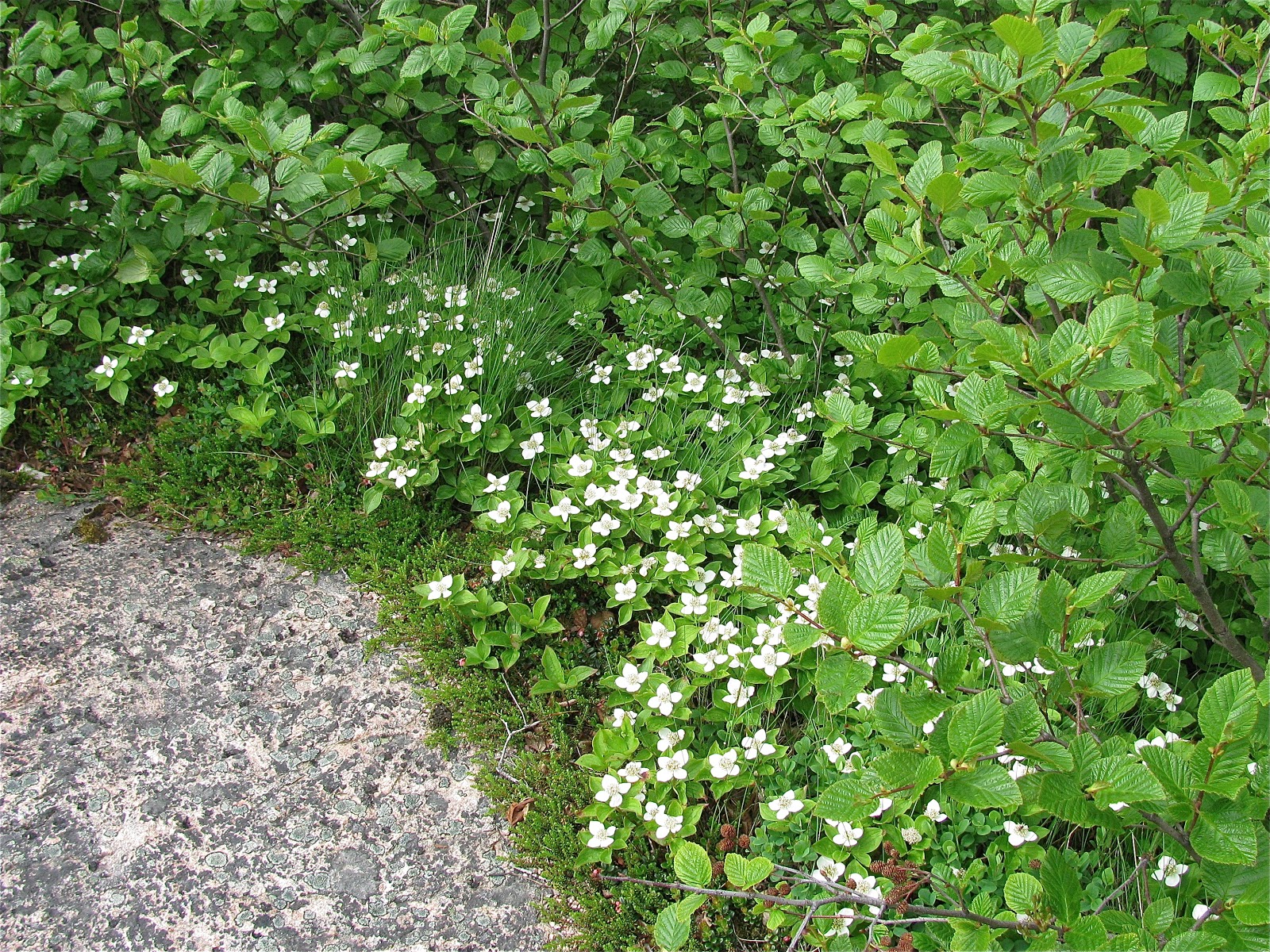 Bunchberry or Creeping Dogwood
with Granite 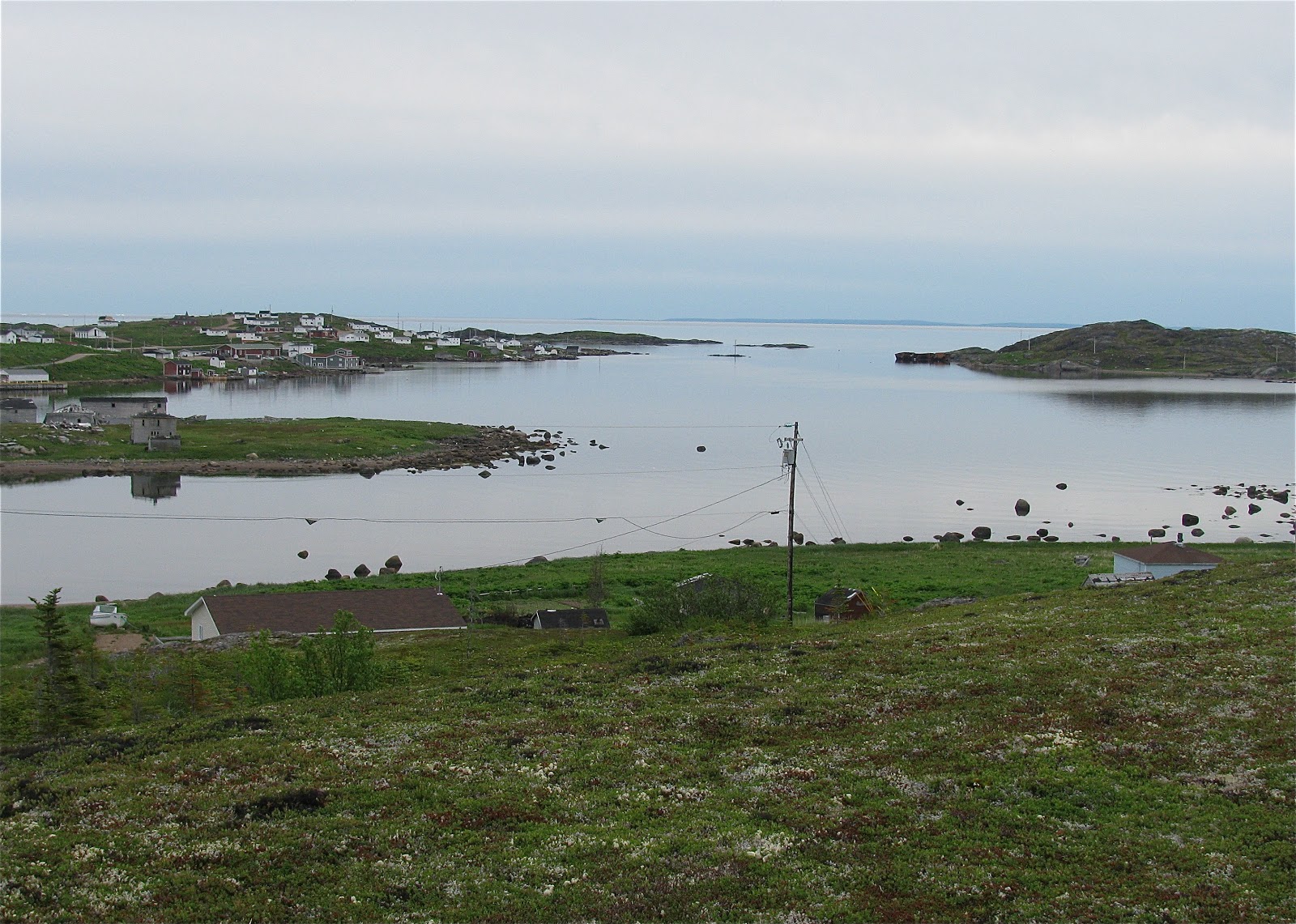 Today Red Bay is fishing village.
As early as 1550 it was a major Basque whaling area.
On-land and underwater archeological discoveries in Red Bay
have established it as a major site
for understanding Basque whaling activities during the 1500s. 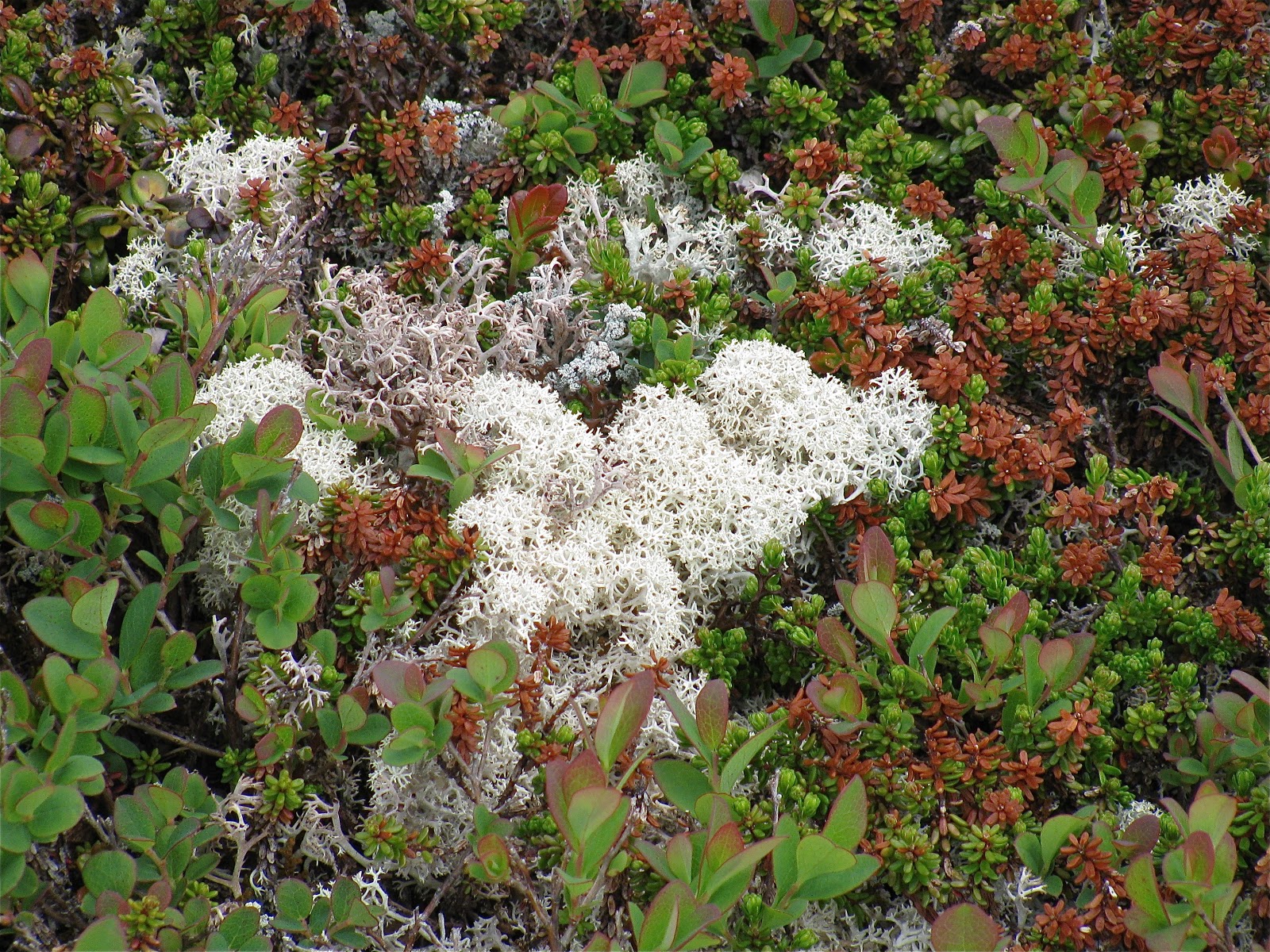 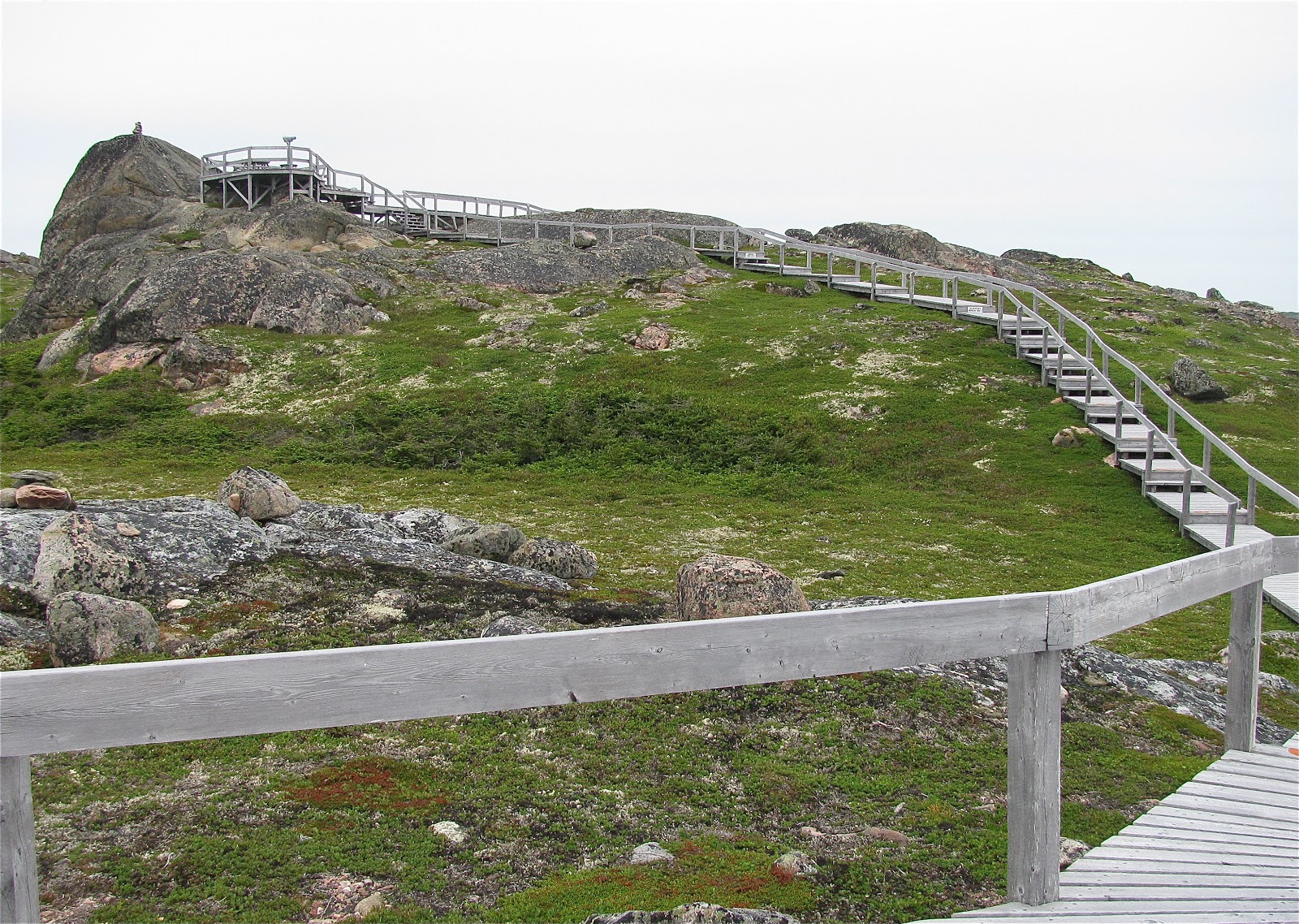 If you're game, you can climb 670 steps over 1,436 meters
to reach the top of Tracey Hill, some 150 meters above Red Bay.
This vantage point has been used over the centuries
to spot whales, seals, birds, icebergs, and ice floes,
as well as ships and planes during wars. 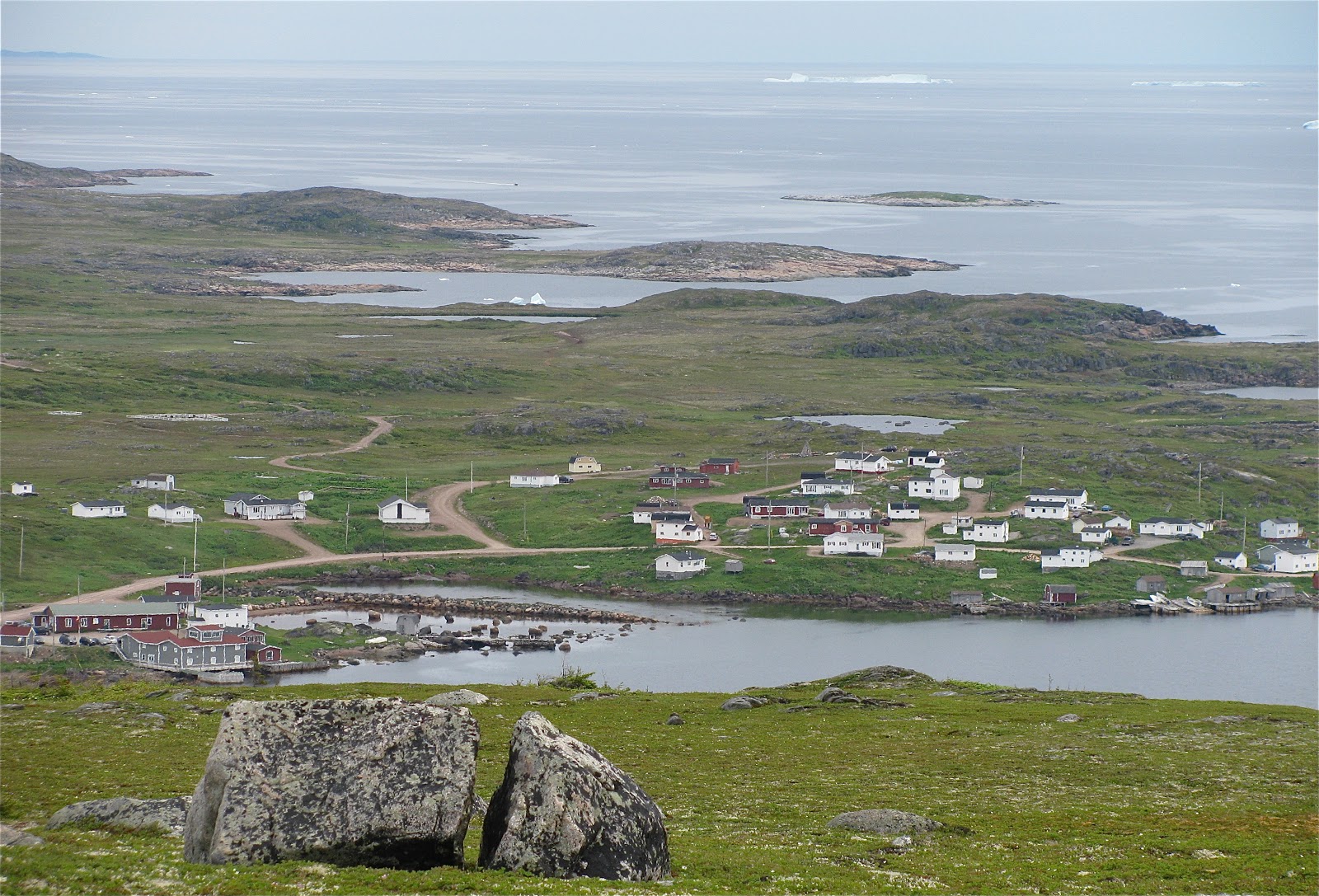 We were able to see some large icebergs and floes
from the top of Tracey Hill overlooking Red Bay. 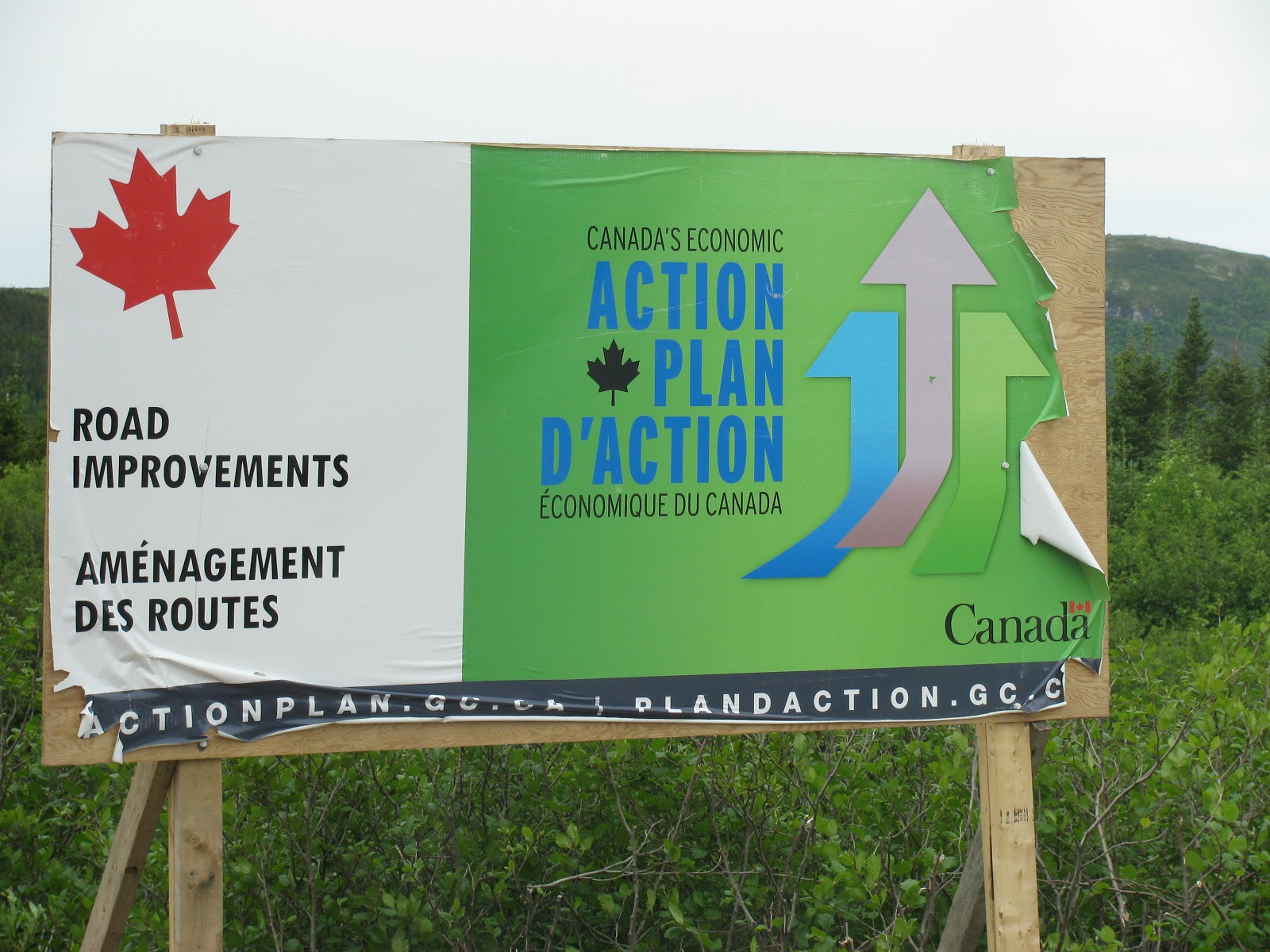 This is so not American! 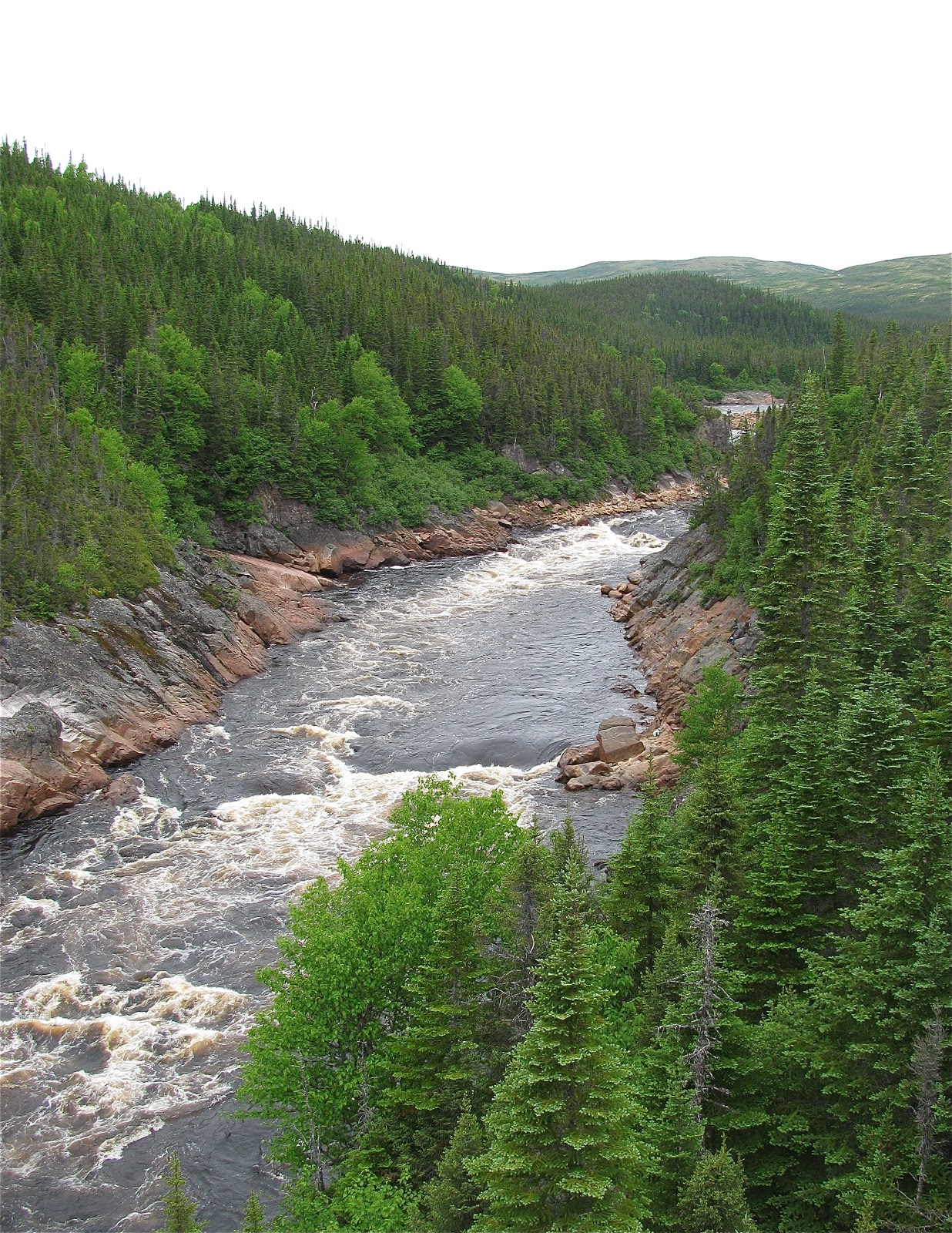 This river is renowned as a site for Atlantic salmon fly-fishing. 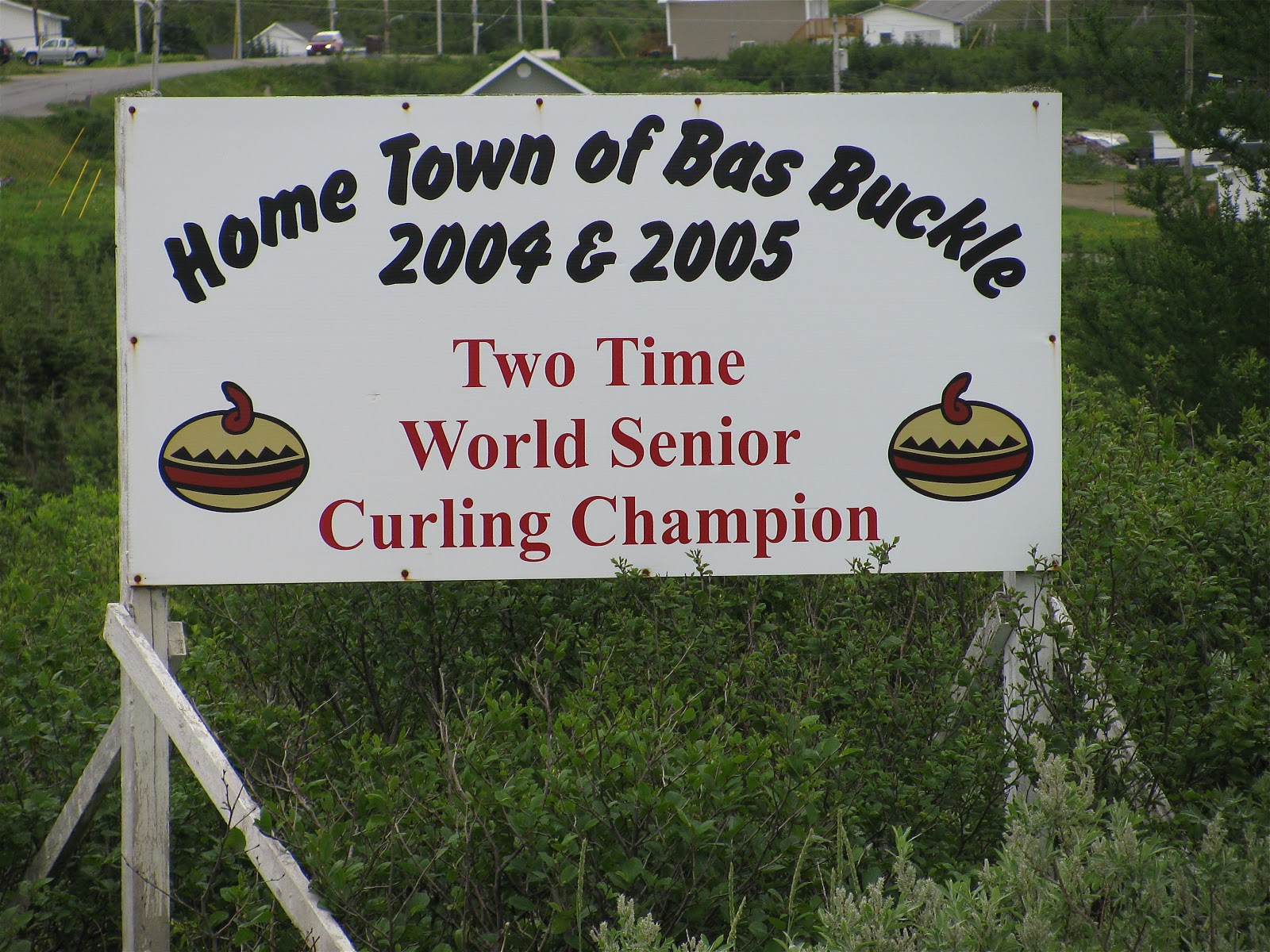 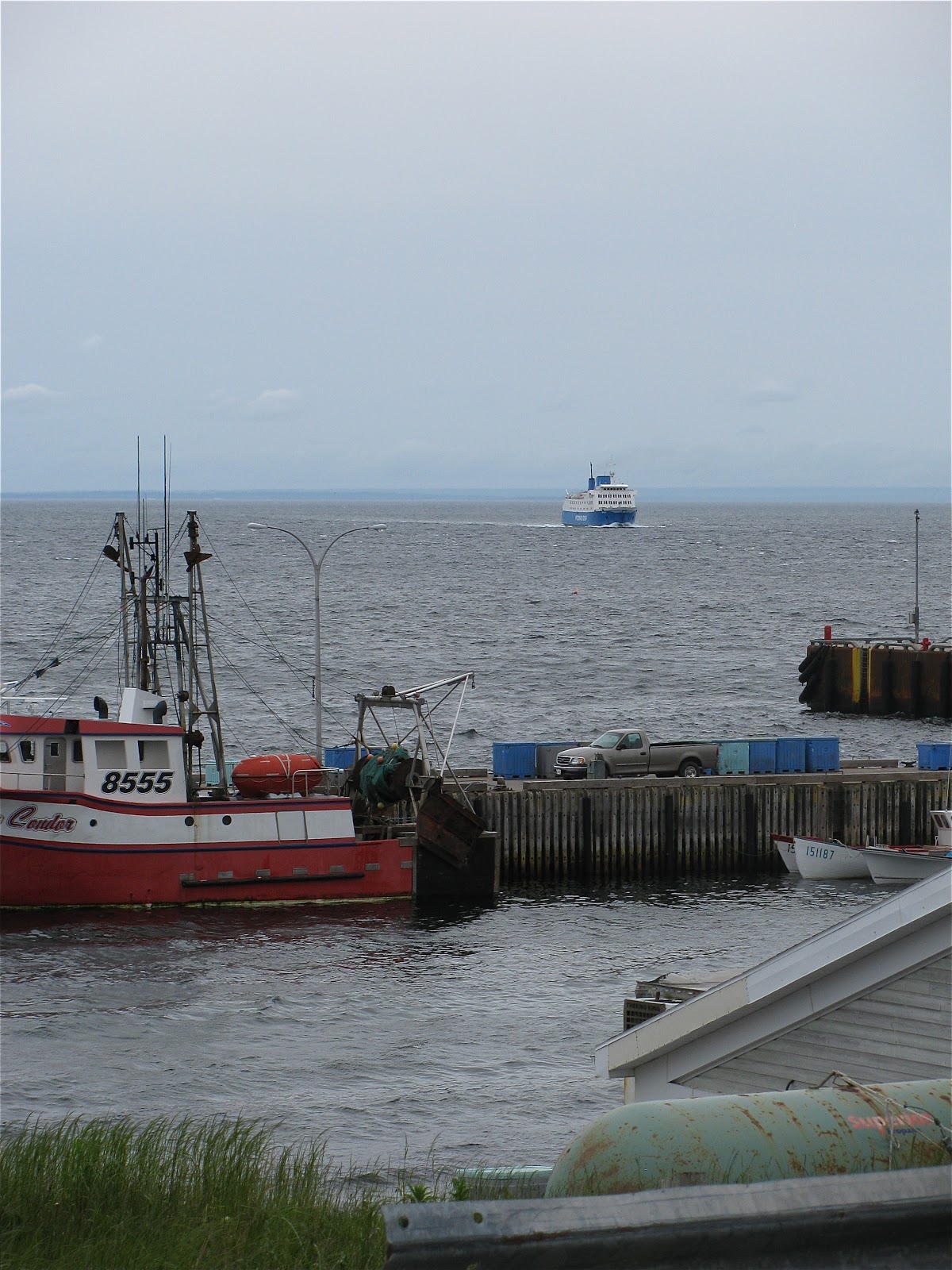 The Ferry Comes for the Return Trip 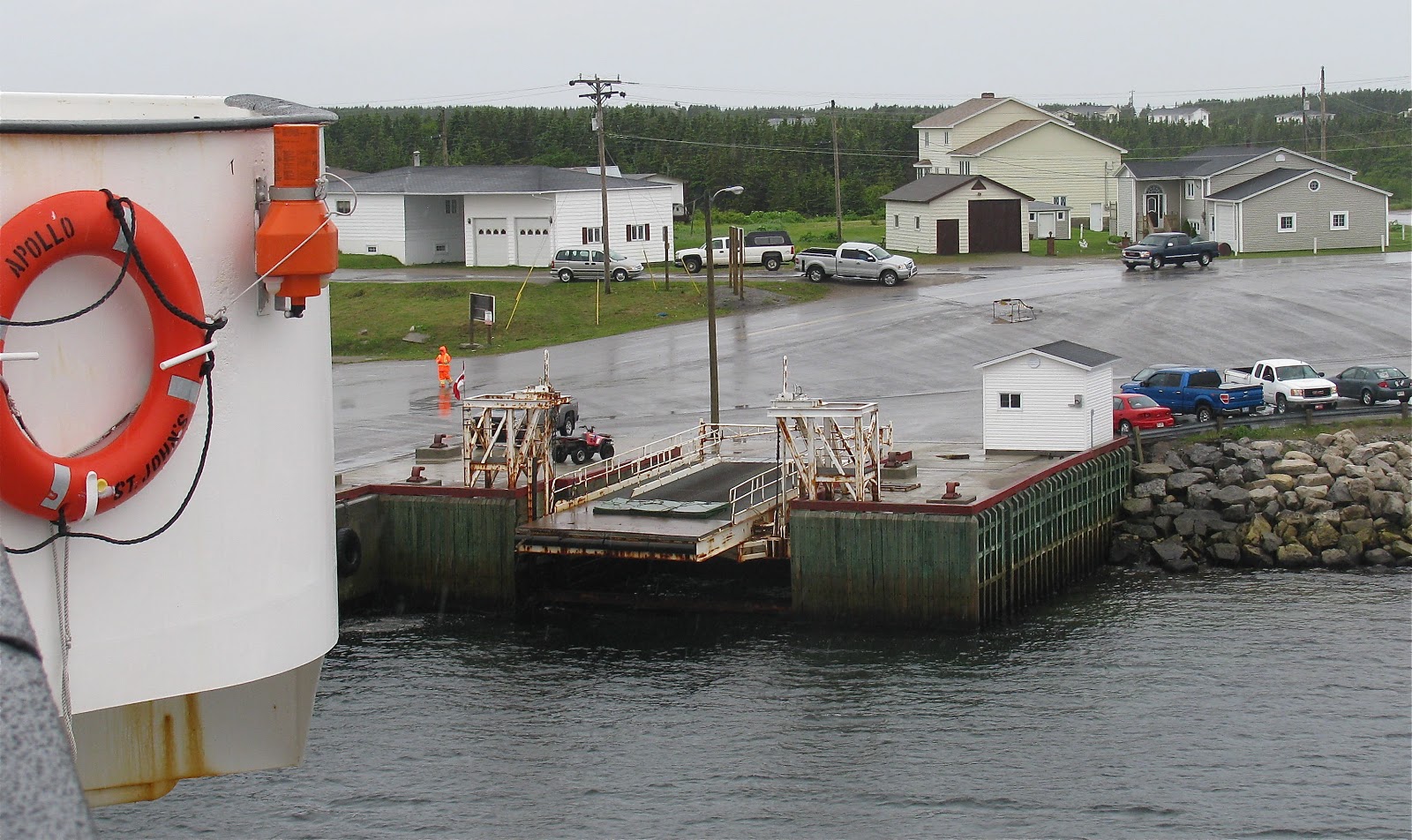 I will come back!

You Tube:  Icebergs Newfoundland and Labrador (1:18)